Keeping Up with the Johnsons

Written by: Clayton Maxwell
Photos by: Will van Overbeek

Written by Art Williams, Photographs by Will van Overbeek | From the January 2016 issue | Updated: January 4, 2016 | Filed Under: TRAVEL 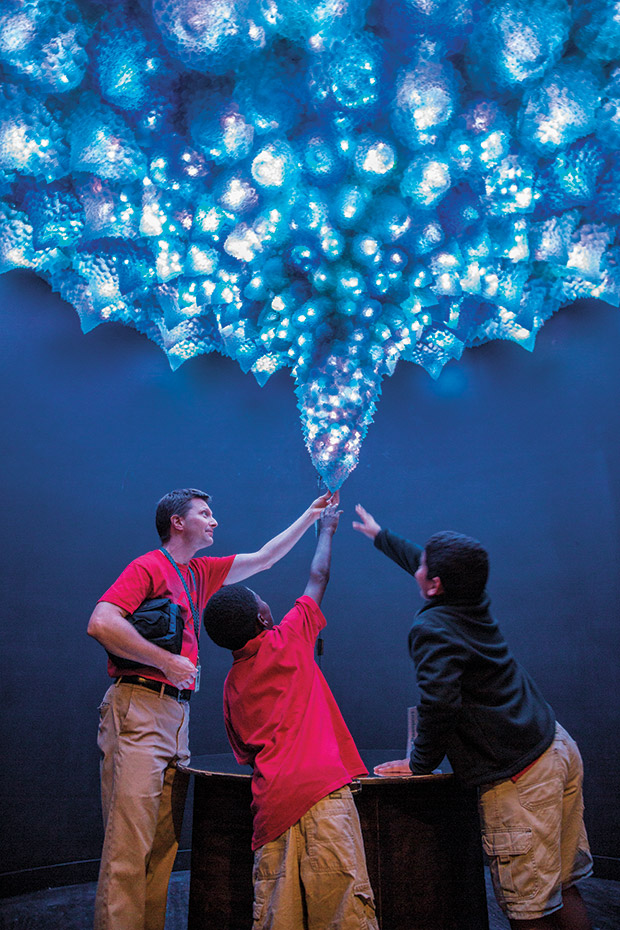 The Hill Country Science Mill’s Fractalarium display includes a replica of a large head of Romanesco broccoli inside a renovated grain silo.

Romanesco broccoli, I just learned, is the ultimate fractal vegetable. On a visit with my children to the new Hill Country Science Mill in Johnson City, we gaze into a supersized glowing head of broccoli. Its multicolored geometric shapes swirl down from a 40-foot silo, giving us a glimpse into the world of fractals, those repeating patterns in nature that can be found in everything from snowflakes to seashells.

Now, my children are curious to learn more. Now, the word “fractal” will have an association for them. Now, just maybe, they will eat their broccoli.

The primary mission of the Science Mill, a children’s museum set in a renovated 1880 gristmill, is to engage kids with the relevancy of science and technology in their lives and their futures. “We want to make the invisible visible,” explains executive Director Renee Williams. “We want to ignite the curiosity of children of all ages and get them asking, ‘What’s going on here?’”

As I experiment with sending a text message into the Cell Phone Disco—an installation that demonstrates how the invisible electromagnetic waves of a cell phone trigger reactions on a wall of LED lights—I, too, am thinking, “What is going on here?” The question applies not just to the impressive offerings and architecture of the Science Mill, but to Johnson City as a whole.

Scooting by on US 290, I’ve always appreciated the gristmill silos and the Hill Country appeal of Johnson City, hometown of our nation’s 36th president. But I’d never bothered to stop. However, when I learned that scientist and entrepreneur Bonnie Baskin, the former CEO of two successful biotech companies, had bought the old mill and opened it as a science museum this past February, I could forestall my visit no longer.

Though Johnson City will always be linked to Lyndon B. Johnson and his family, the modern-day town is home to an eclectic swath of personalities, from a young realist painter to retired CEOs like Baskin and an innovative photographer who has organized spirited art installations throughout town, including the world’s largest cyanotype. 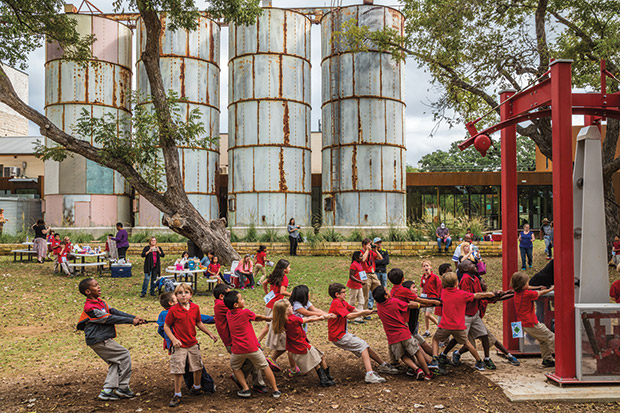 Students play tug of war against their classmates at the Hill Country Soce Mill’s Giant Lever, an exhibit that demonstrates the physics of leverage.

“There are a lot of people here interested in cultivating the creative side of life,” says Patty Elliott, half of the husband-wife team behind Pecan Street Brewing, located on the Blanco County Courthouse square. “We prefer to keep the big box stores out and are proud to support the local businesses run by our community. Johnson City strikes a balance between history-rich ranching families and free-thinking artists who are inspired by this area.”

Patty and her husband Tim landed here after their Houston export and packaging business suffered a crippling fire in 2002. When the charming old Blanco County Supply building went up for sale in 2008, they decided to buy it and pursue their interest in a brewery, even sending their son Sean to Europe to study the brewing craft.

Sean Elliott’s cross-Atlantic training deepens the brewpub’s endearing mash-up of Hill Country style with European pub culture. In the pub’s lively bar, you’ll find hunters in camouflage sitting near both a Texas flag and arrow signs that read: “Munich 8832 KM, London 4967 miles.” Visible behind the bar, the brewery’s large shiny tanks perform the sacred alchemy of turning hops, oats, wheat, and barley into tasty brews with names like Ladybird’s Wit (a Belgian white) and County Jail Pale Ale (an American ale). This coexistence of Old World and New is evident in the pub menu, too, with such offerings as brick-oven pizza, crispy fish and chips, and good ol’ chicken-fried steak.

The buzz of the brewpub and the Science Mill has proven contagious in this town of about 1,600 people. “They have definitely brought more movement and interest to this little crossroads area,” says Lee Casbeer, a painter and muralist with a studio and gallery on Nugent Avenue, a downtown street intersecting 290 with a concentration of galleries and shops. 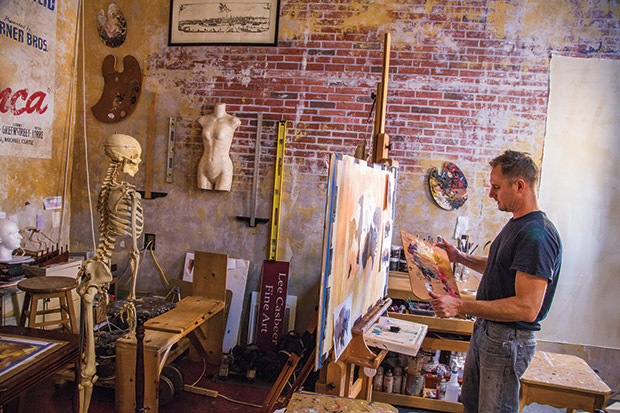 Lee Casbeer paints at his gallery.

“For the past three years, we’ve been coordinating fun art walks on the last Saturday of the month,” says Casbeer, who’s known for his lifelike portraits, and realistic yet imaginative portrayals of people, animals, and places. “I’d say we’ve seen a well-established artists’ community really take shape here.”

And then there’s A Smith Gallery, where Amanda Smith and Kevin Tully feature artist-juried photo exhibitions that bring fresh energy to contemporary photography in Central Texas. Smith and Tully are also the masterminds behind the aforementioned “world’s largest cyanotype” in which a cast of characters from the community all lay down together on a 30-by-90-foot piece of photo-sensitive fabric to have their forms outlined by rays of the sun. The resulting piece, titled Big Blue (in storage at press time), is visual testimony to how artists, kids, ranchers, grandparents, and everyone else are invited into the fold of playful creativity in Johnson City.

With all of this science, art, and good coffee now percolating in the heart of Johnson City, you might wonder if the town’s most famous son has become an afterthought. Not a chance. You can feel the Johnson legacy distinctly when visiting LBJ’s boyhood home or strolling through the tall grasses of the 1850s Johnson Family Settlement. Both are National Park Service sites within a stone’s throw of the town center. Press the button on a display at the old dogtrot cabin of LBJ’s grandfather to hear a recording of Luci Baines Johnson’s animated story of a Lipan Apache raid that her great-grandmother endured there.

I also gain lively LBJ insights at the new Hahne Estates Winery tasting room, located next to Pecan Street Brewing. Winemaker Gary Hahne’s parents were friends of the Johnsons and catered huge barbecues and other events at the LBJ ranch. (The ranch, located 15 miles west of Johnson City, is now a National Historical Park.) During LBJ’s presidency (1963-1969), Associated Press journalists stayed at the Hahne family’s motel in Stonewall. Photographers built a darkroom there and would toss the unneeded black-and-whites of LBJ into the trash. Hahne’s father saved the old images, and now they line the walls of the tasting room. These rare photos, a scrapbook that Lady Bird gave Hahne’s mother, and personal correspondence from the Johnsons help paint a rich picture of the Johnsons’ deep connections with the local community. But unlike a museum, you can learn all of this while sipping one of the five varieties of Hahne’s tasty Hill Country wines.

For a taste of the natural Hill Country setting that the Johnson and Hahne families encountered here in the 19th Century, I spend a night during my visit at Songbird Meadows Bed and Breakfast, a collection of three cabins on 16 wooded acres. The property, covered with trees like live oaks, junipers, and chokecherries, is popular with birders, as more than 100 species have been documented here. Owners Patrick and Patti McLead make sure you feel cared for, from the breakfast basket with freshly baked quiche and banana bread left on your front porch to the cabins’ tidy kitchens and the thoughtful walking path, which even has a spot for throwing china plates at a pile of wood in order to relieve stress.

One can only imagine that the Johnsons would be delighted to see their eponymous town on the move, rather than solely replaying its presidential past. In fact, old and new seem to get along quite well here. After all, the town’s architectural icon, if you recall, is a funky old mill from the late 1800s that is now a state-of-the-art science museum designed to spark young people’s imaginations about the future.