Rockhounds scour the state for the good stuff 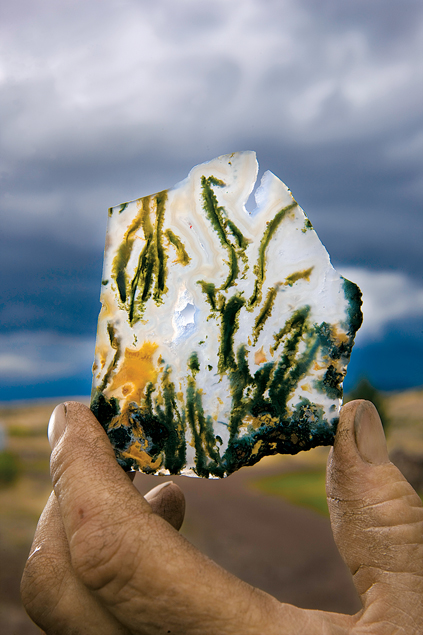 I must have rocks in my head to be out in the scorching Big Bend sun, teetering on a steep talus slope on Needle Peak, dodging thorny lechuguilla and prickly pear while searching for pom-pom agates and chalcedony pseudomorphs.

Agate expert Trey Woodward leads the way up the mountain. He has a knack for spotting dazzling rocks and helps me find “the good stuff” up and down the mountain.

“The hard part about Needle Peak is just getting to it,” says Woodward. The rugged spire, also known as Sierra Aguja, rises south of Terlingua on the western edge of Big Bend National Park. While the last few miles of dirt road leading to Woodward’s 285-acre Needle Peak acreage are rough going, the real fun begins when he powers his fat-tire Jeep down a slippery, flood-soaked creek, splattering us with muddy gumbo.

“Everyone loves the ride down here,” says Woodward, who leads outings to Needle Peak from his Woodward Ranch near Alpine, a renowned rockhound mecca where I got hooked on agate hunting years ago.

Whether I’m searching for agate in the volcanic backcountry of West Texas, precious gems and rare minerals in the Llano Uplift of Central Texas, or pelecypod fossils in Cretaceous limestone around Austin, collecting rocks captivates me like no other hobby. Many thousands of rockhounds share my passion for Texas’ geologic treasures.

“Rock hunting is like treasure hunting,” says Teri Smith, a rockhound from Alpine with a passion for agates and guiding others to prime collecting spots.

“You can be a scientist, artist, and explorer—all with rocks,” adds Smith, who has a rock shop and museum at the Antelope Lodge in Alpine, which she owns with her husband, John. “It’s thrilling to discover something beautiful, unlike anything you’ve ever seen.”

While Texas abounds with rocks, minerals, and fossils, public access poses a challenge. More than 94 percent of Texas is private land, off-limits to rockhounds without landowner permission. Much of the state’s public land includes state and nation-al parks and wildlife management areas where it’s illegal to collect rocks, artifacts, or plants.

Fortunately, rockhounds can hunt legally on pub-lic easements along Texas roads, and roadcuts can prove fruitful for collecting. Nine miles north of Llano, for example, Texas 16 slices through the world’s only known outcropping of llanite, a rare form of rhyolite flecked with blue quartz crystals. Collectors flock to this site to chip away at the tough llanite boulders.

Texas law also allows limited public access to the state’s navigable streams and rivers. Along the Llano River, gold hunters frequent low-water crossings to pan for specks of the precious metal, while others search the riverbed for topaz and quartz.

For the inside scoop on rock-hunting sites in Texas, Smith advises, ”.Join your local gem and mineral club. It’s the best way to find out about the finds collectors have made:’ More than 40 rock clubs in Texas attract members of all experience levels. The clubs often sponsor annual rock shows, and host field trips to collecting sites and quarries on private land.

A handful of ranches across Texas promote themselves as rock-collecting destinations, open to the public. The most popular of these lies 16 miles south of Alpine: the 3,000-acre Woodward Ranch, the only known source of red plume agate. Precious few places like the Woodward exist-where visitors can roam and find more than 60 different gemstones, such as precious opal, carnelian, labradorite, amethyst, and a rainbow of agates.

“My grandfather started the rock business here, and my father, Frank Woodward Jr., built it up; ‘ says Trey, a fourth-generation Woodward who runs the ranch along with his wife, Jan. Collectors check in at their rustic rock shop, a trove of uncut, sliced, and polished agate.

“I give visitors an orientation at the rock shop, show them what to look for, and point them in the right direction;’ adds Woodward, who advises guests to search for flat-bottomed agate biscuits. “They bring their finds back to the shop, and the agate is just two dollars a pound. It’s the most fun you can have for a few bucks.”

Another rock-hunting destination, the Stillwell Ranch, lies in the rolling, volcanic hills 45 miles south of Marathon. The late ranchwoman Hallie Stillwell found hundreds of lithic artifacts on the ranch in the early 20th Century. Rockhounds have come here for decades in search of chalcedony, agate, jasper, petrified wood, and flint.

WT. Potter, the ranch’s resident rockbound and Stillwell patriarch, has a fond refrain: ”We’re selling the ranch one rock at a time.” And the going rate is still just 50 cents a pound.

A longtime lapidarist, Potter cuts and tumbles One rock at a time. With a rock collector’s requisite patience and focus, Susi Bachman of Austin searches for earthly treasures at Needle Peak. rocks in a shed behind the Stillwell Store. Handing me some colorful slabs of agate and jasper, he smiles, “I get as much pleasure giving away rocks as selling them, especially to kids.”

Deloris Lindsay, who lives on the Lindsay Ranch in Mason County, feels the same way about kids and rocks. Several years ago, she and her husband, Clay, opened their cattle ranch (established in 1858) to rock hunters, many of whom stay at the Lindsays’ guest-houses. “A lot of kids never get a chance to get out and walk around in nature;’ says Lind-say. “Kids really enjoy it here, and I encourage them to take home rocks as souvenirs.”

Some guests have found smoky quartz crystals, arrowheads, and even topaz. While scouring the ranch’s lovely hills and creeks for similar treasures last summer, I happily gathered quartz, granite, gneiss, and flint, and experienced a sense of deja vu-the echo of a recurring dream in which I find crystals and gems in a sandy wash and stuff my pockets with precious stones. If only unearthing Texas topaz were that easy.

“You need to have a lot of luck and turn over a lot of dirt and rocks to find topaz,” says Mike Seaquist, a retired veterinarian. His Seaquist Ranch near Grit is the most famous and productive Texas topaz-hunting site open to the public. “People visiting my ranch find all kinds of pretty rocks, not just topaz.”

Texans first found topaz in Mason County in the early 20th Century in streambeds and pegmatites. The largest gem-quality topaz crystal found in North America came from Mason County. On loan from the Smithsonian, the nearly three-pound stone sits on display in the Mason Square Museum. It’s a shimmery, pale blue, but topaz hues range from clear to brown and yellow to the sought-after pale blue.

“The hunting is best after a good rain, when stones wash into the drainages,’ explains Seaquist, while we hike one spring morning along “Topaz Gulch;’ a boulder-strewn alluvial drainage snaking through the ranch’s pink-granite outcrop-pings. We come upon three topaz hunters hard at work in the blazing sun, shoveling and sifting sediments through wire screens, and we stop to talk.

“We move a lot of dirt;’ admits T.J. Nash, an avid topaz hunter from Manor. “The first few times we came here, we didn’t know what we were doing. Now I think about the way the water flows and deposits sand. I dig out the deeper areas and often find one or two topaz.”

Within an hour of digging and sifting, T.J. and his wife, Laurie, find an arrowhead and a pea-size topaz. Holding the small, translucent gemstone in his hand, T.J. smiles and says, “I have a feeling there’s a big one still in there somewhere …. “

The big one: It’s what keeps rockhounds searching endlessly for a 200-carat blue topaz, a red plume agate biscuit, a three-inch smoky quartz crystal, or a chunk of rare earth-rich monazite.

I love the thrill of the chase, searching for earth’s treasures. On the quest, I stare so long and hard at the ground for flashes of color that my vision blurs by the end of the day. Hours pass like minutes, and I have to tear myself away: ”Wait, just one more rock …. “