A Canoe Exploration of Caddo Lake’s Creatures and History 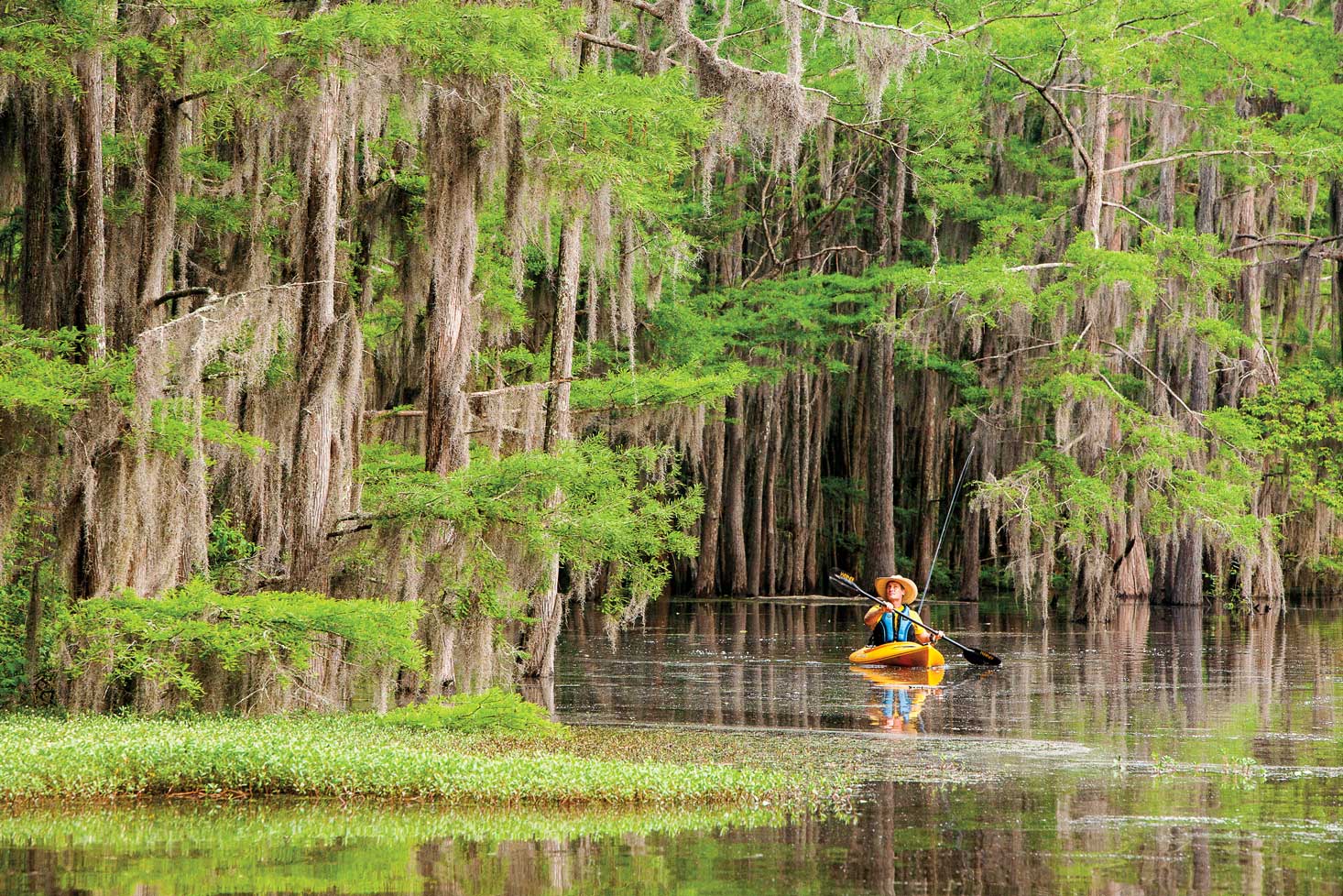 Two hours into my canoeing adventure on Caddo Lake, I saw an osprey swoop down into the water and emerge with a fish clutched in its beak. I was debating whether the raptor would stick around long enough for me to pull out my binoculars when an enterprising bald eagle suddenly appeared and struck the osprey in mid-air. The osprey tumbled but managed to keep the fish, and then flew higher. My group watched in wonder as the two magnificent birds circled one another over the lake’s cypress forest for several minutes.

For information on guide services, lodging, and dining, visit the Caddo Lake Area Chamber of Commerce and Tourism at caddolake.org.

Located on the border of northeast Texas and Louisiana, Caddo Lake’s 26,000-acre network of bayous, sloughs, and wetland cypress forests make up one of the state’s wildest natural treasures. I had driven from San Antonio to explore the lake with guides Kelsey Johnson and Chelsey Rankin, rangers at Caddo Lake State Park.

“Caddo Lake has one of the largest cypress groves in the world,” Johnson explained as we launched our canoes on the state park’s Sawmill Pond. Visitors can rent canoes from the state park to explore the pond, or for a longer and more strenuous outing, paddle out into the main tributary of Big Cypress Bayou and explore a variety of paddling trails.

The Caddo called the lake Tso’to, which translates as “water thrown up into the drift along the shore by the wind.”

Caddo Lake is part of Big Cypress Bayou—a tributary of the Red River—and our route followed the Hell’s Half Acre Paddling Trail along the bayou for about 2.5 miles east to RiverBend Restaurant, which overlooks the bayou near its juncture with Pine Island Pond. Located on the outskirts of Karnack, RiverBend is a popular stop for East Texas favorites like fried and blackened catfish, rib-eyes, frog legs, and alligator. (We met our shuttle at the restaurant’s boat ramp, but paddlers looking for a moderate day trip could make RiverBend a midway stopping point before paddling back to the park.)

Caddo Lake, the only naturally occurring lake in Texas, formed in the early 1800s when a massive logjam on the Red River—called the Great Raft—grew so dense that it dammed the river and caused floodwater to back up all the way into the Big Cypress watershed. The lake is home to more than 70 fish species and 250 bird species, as well as rare plants, according to Johnson.

“Caddo Lake is more of a wetland or swamp environment than a lake, and these are disappearing in the world,” she said. “They are some of the most valuable ecosystems found on the planet.” 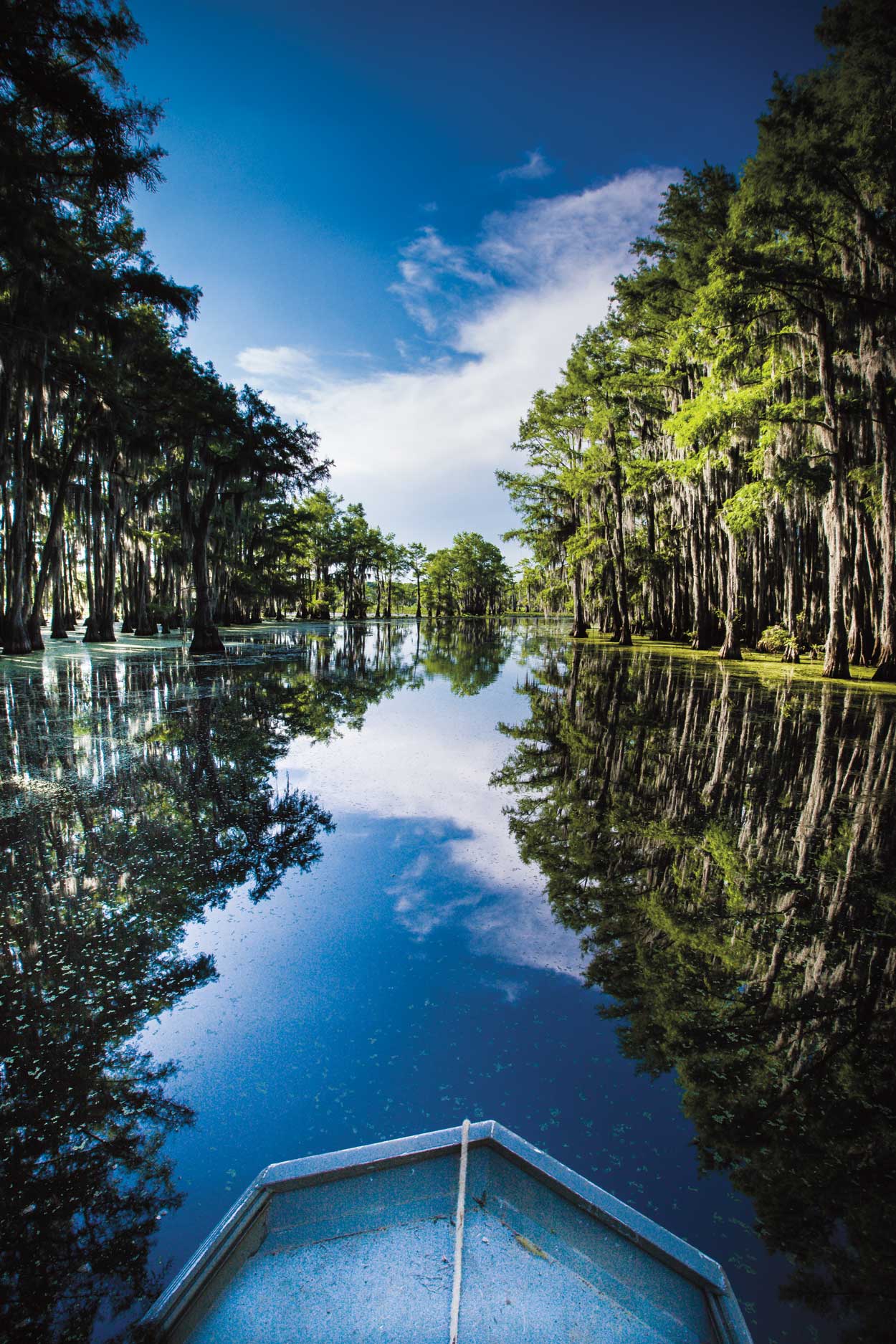 In recognition of Caddo Lake’s ecological significance, in 1993 the U.S. government designated it Texas’ only Wetland of International Importance under the Ramsar Convention, an international network of preserves aimed at protecting biological diversity and bird habitat.

During our tour, we learned that Caddo Lake’s cultural richness matches its ecological diversity. The area has drawn people for at least 12,000 years, including the 25 or so bands of Native Americans known collectively as the Caddo. The Caddo called the lake Tso’to, which translates as “water thrown up into the drift along the shore by the wind,” according to the Texas Parks and Wildlife Department.

European and American settlers began arriving in significant numbers in the area around the 1830s, many traveling by steamboat from New Orleans. By 1844 nearby Jefferson was the second-busiest commercial port in Texas, after Galveston, fueled by the timber and cotton industries.

The lake remains pivotal to the local economy, particularly as a draw for anglers. Bass, catfish, gar, and crappie are all popular sport fish. (The state park offers loaner tackle for fishing within the park.) “Most of the restaurants pull fish from the lake,” Johnson said. “Residents run boat tours on the lake or have campgrounds. They’re all tied into the lake. We need to take care of it.” 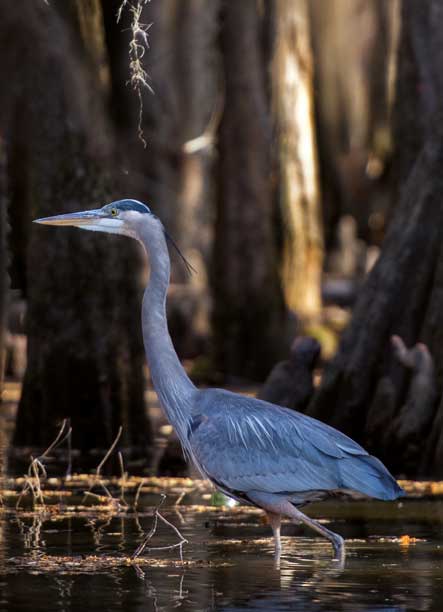 Unlike fishing, other industries have come and gone. In 1873, the U.S. Army Corps of Engineers dynamited the last of the Great Raft, lowering the bayou’s water level and cutting off steamboat access to Jefferson. As the water dropped, pearl hunters began to scour the lake bottom for freshwater mussels. 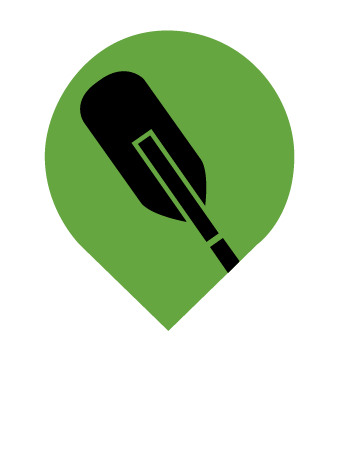 I had learned about the pearl hunters during a stop at the Caddo Lake State Park visitor center, which has a small museum with displays about regional history. One of the exhibits covers the development of the oil industry, including how Caddo Lake hosted the world’s first over-water drilling rig in 1914. Also that year, Gulf Refining Corporation built a permanent dam to restore the lake’s water level, effectively ending the era of pearl hunting.

We hadn’t noticed any signs of industry—only a few homes built on stilts—as we paddled up Big Cypress Bayou and into the cypress maze of Pine Island Pond. What we noticed was the profound peace and quiet. As we wove our boat among the cypress trees of Pine Island Pond, sunlight glinted through the branches draped with Spanish moss.

“What is so magical about being out on the boat is that you feel like you are in a different era, like you can see the Caddo coming down the river,” Johnson mused.

I, too, felt a sense of timelessness during our expedition, and it wasn’t just wistful thinking. In the waters below us swam paddlefish, a threatened species that has been around for 200 to 300 million years, making it the oldest surviving animal species in North America. The toothless fish grow as long as 7 feet, including their long, flat snouts, and eat by scooping up plankton as they swim with their mouths open. Though we didn’t see a paddlefish, the very thought that such an ancient species swam below us ensured that I’d always remember Caddo Lake with a sense of wonder.