Earth Native equips students with the skills to fend off disaster 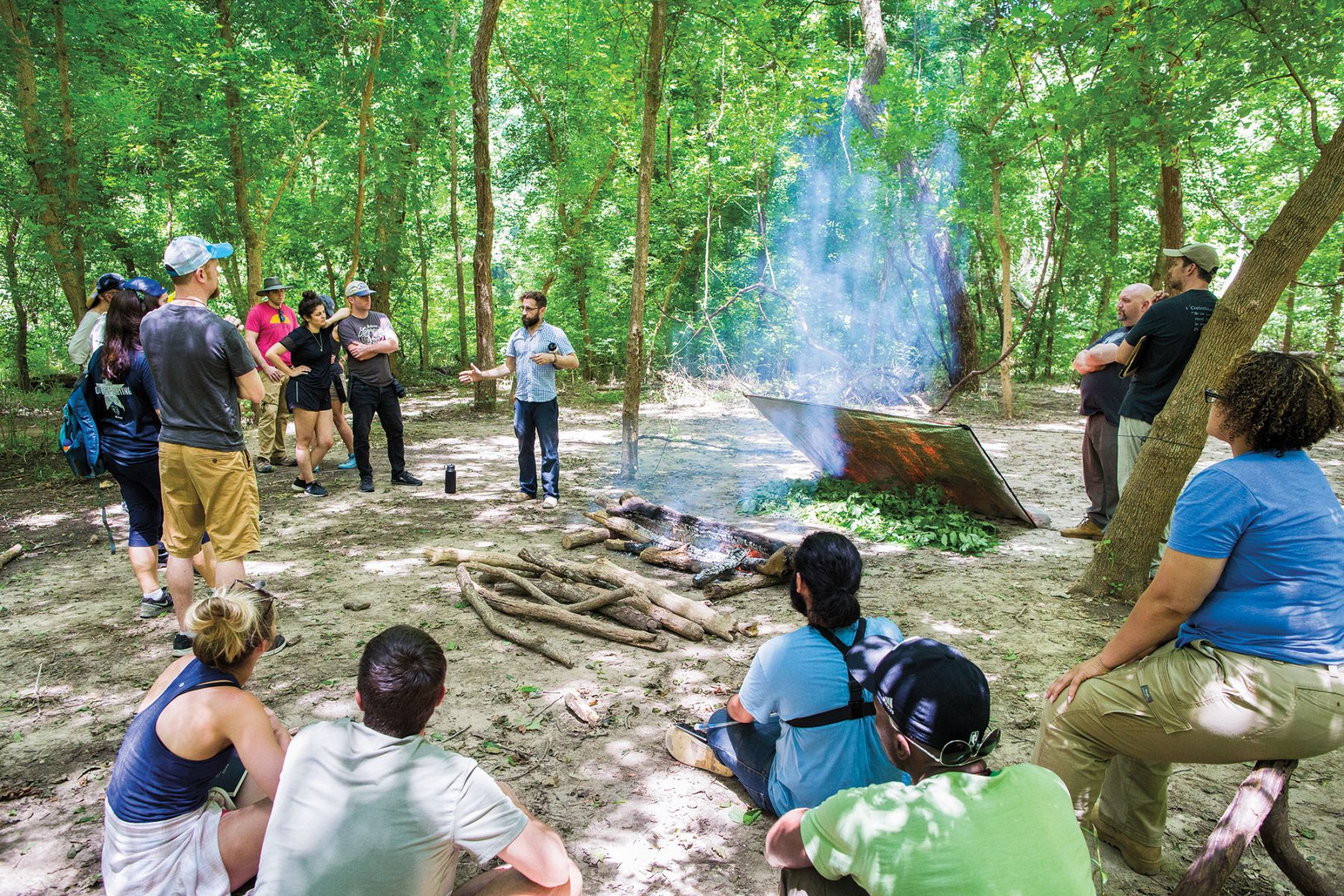 My team has one minute left to start a fire, and I’m holding our last match. We’re in the woods, sitting on a forgotten concrete slab. I scrape the match against the rough cement and, miraculously, it lights. Cupping my hand to protect the flame from the March wind, I hold it against the little pyramid of sticks I’ve built with Austin residents Kevin Woodling and his 11-year-old son, Jonathan. The flame licks against one of the thin oak branches in our pile as the match begins to wither. Just as our instructor says our time’s up, the flame peters out.

Prepare for the great outdoors with classes offered by Earth Native in Bastrop.
512-299-8870
earthnativeschool.com

My poor record at starting fires is one reason I’ve come to Wilderness Survival 101, a two-day class costing $195 at the Earth Native Wilderness School in Bastrop. The school offers programs for all ages that strengthen people’s outdoor skills and help them connect with nature. The last time I car-camped alone, I couldn’t get a fire going to save my life. Fortunately, the stakes weren’t that high. But if I want to take my outdoor activities to the next level—try a multiday backpacking trip, for example—I need to become more capable. Plus, I just like the idea, however far-fetched, of escaping from my everyday reality to a place where technology can’t follow me. What would it take to survive there?

Earth Native founder Dave Scott grew up tagging along with his father and uncle on volunteer search-and-rescue missions in Colorado. After six years in the military, he began studying wilderness survival techniques. In 2011, he launched Earth Native, one of a handful of schools in Texas that meld advanced outdoor skills like backcountry navigation, shelter building, and plant medicine with nature appreciation. Scott says he’s noticed an uptick in people’s interest in these types of skills because of survival-oriented reality TV shows. But the majority of his students tend to be less extreme. They mostly want to get into backpacking or spend more time outside with their kids. 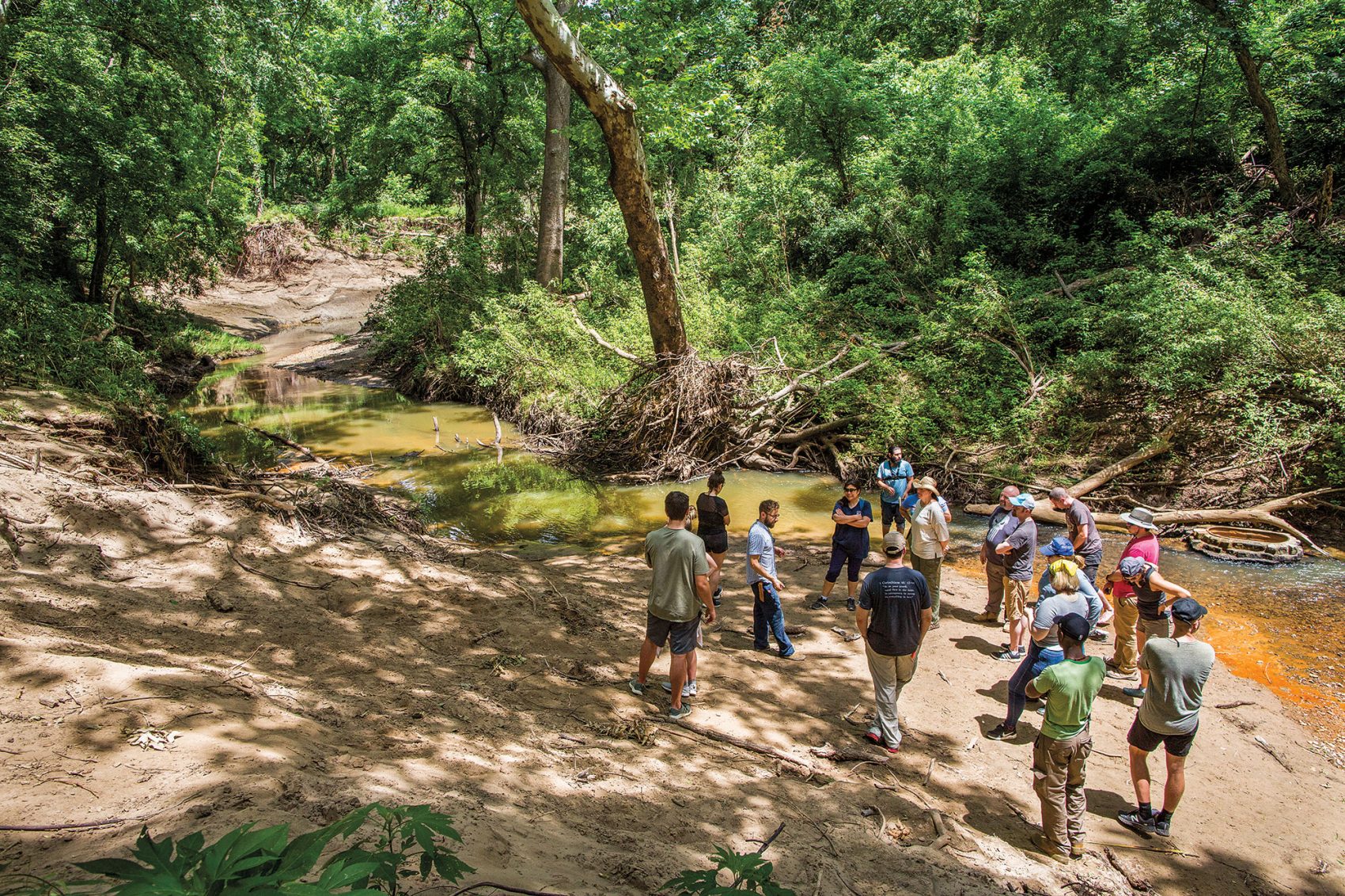 At the school’s 25-acre campus, we carry our camp chairs past a picnic area, where a kids’ class is meeting, down a gentle hill to a clearing in a wooded area bordered by Cedar Creek. A tarp stretched between the pecan trees shelters us from the sun and, after a cool front arrives, the occasional sprinkle of rain.

“A survival situation is a high-stress situation without normal resources,” Scott explains. “We always imagine something dramatic like a plane crash in Alaska, but you’re in a survival situation if your car breaks down on a backroad and you don’t have the skills or equipment to fix it.”

In any risky situation, Scott says, our best survival tools are our brain and our ability to stay calm and solve one problem at a time. That means first making sure we don’t overheat or develop hypothermia. Then: locate water, followed by food. A fire might figure into our survival strategy, if only because building one could give us a confidence boost.

But right now, at Wilderness Survival 101, our time has expired. Scott and his co-instructor, Bryan Pope, summon the 20 of us back to our camp chairs. Only one group has managed to start a fire. We’ve made the same errors all beginners make. We need dry, soft wood, but we’ve gathered wood from an area near the creek, where it’s cooler and damper. Scott says we should focus on igniting smaller materials first, then feed the fire with slightly larger twigs and sticks.

We have 10 minutes to try again. This time, the Woodlings and I find a cedar tree on higher ground and pull off dry branches and strips of bark. We use our non-folding utility knives—the only equipment the class requires—to shave off kindling. Kevin holds a match to the small pile. Quickly, we add tiny twigs, then larger ones. Our little fire looks haphazard, but it’s actually burning. I feel a surge of triumph, like I’ve finally brought an unwieldy force under my control.

Kevin and I high-five. This is old hat for Jonathan, who attended a previous Earth Native class where he learned how to start a fire with a magnifying glass. They’re here because Kevin suggested they take a class together.

“I like learning,” Kevin says, gesturing to the fire, “and this is stuff that people in general have lost touch with.” 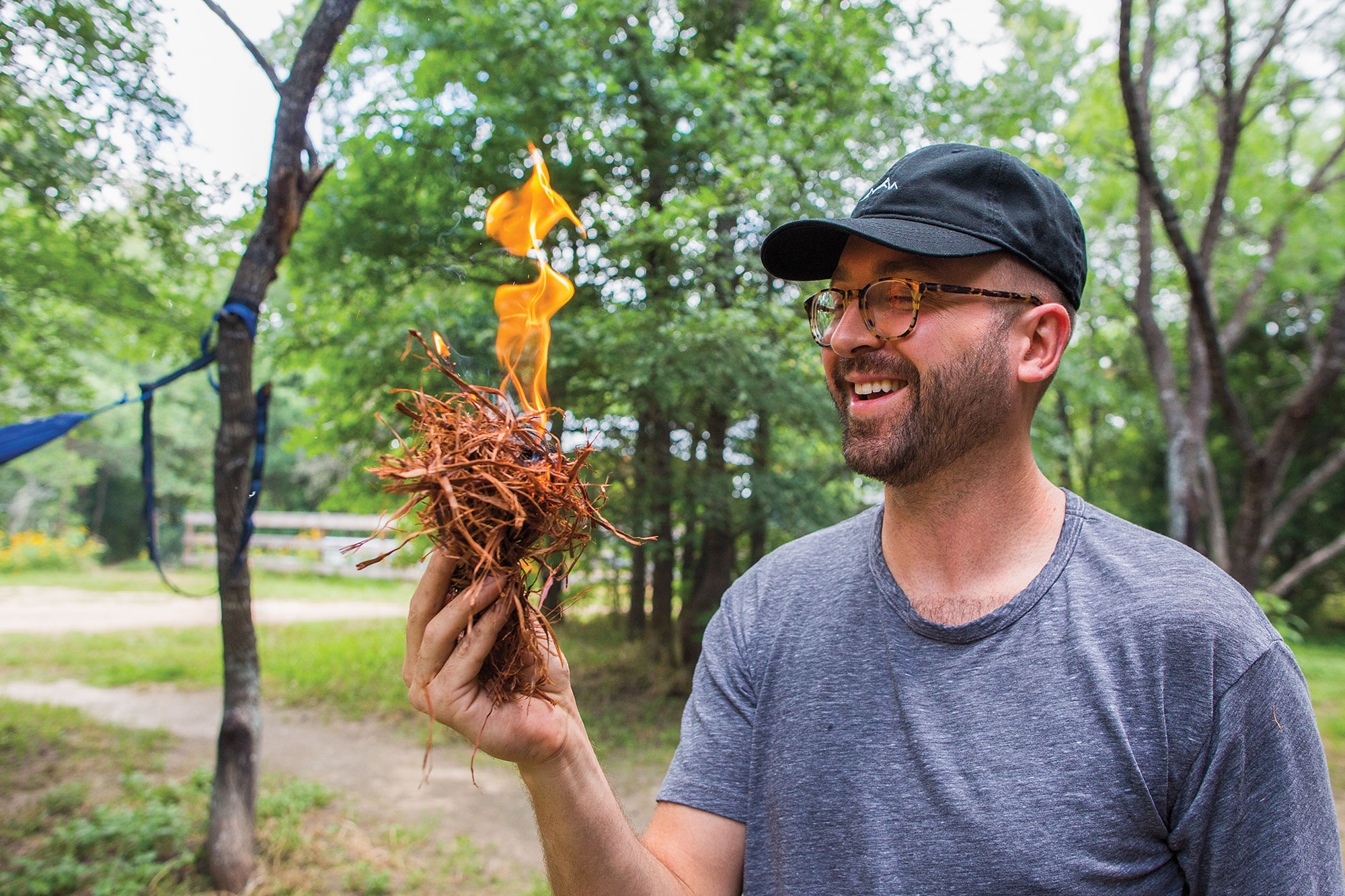 Our fellow student Carla Deavers is also here to develop skills she never thought she’d need. She, her husband, and her 14-year-old son came to the class from Houston, where they’ve weathered multiple hurricanes and power outages.

Deavers says her biggest takeaway is the importance of remaining calm in an emergency. She points to the highway gridlock that occurred in 2005 when, weeks after Hurricane Katrina, hordes of panicked Houstonians tried to evacuate before Hurricane Rita. “Because I’m a nurse, maybe I have a cooler head than some,” Deavers says. “But what about my kid? If something happens to him, he needs to understand staying cool, thinking, and not panicking.”

The lessons continue with navigation. Pope demonstrates how to figure out the cardinal directions—north, south, east, west—by planting a stick in the ground and determining which way the sun or stars “move” in comparison to that fixed point. Scott also talks us through some options for filtering and purifying water. Then we head to a clearing where Pope shows us how he’s used paracord to hang a 5-by-7-foot reflective tarp between two trees. He’s made a bed of elderberry leaves beneath the improvised shelter and built an impressive fire next to it. We take turns crawling under the tarp and curling up on the elderberry leaves, which are fragrant in the fire’s reflected heat.

Our last activity is a forage walk. Scott leads our group down the trail, pointing out edible plants. The young leaves of the cedar elm are safe. I tear a bright-green leaf from a low branch and chew. We pluck tiny, almost embryonic fruit from a mustang grapevine. Our mouths pucker at the tartness. Scott singles out greenbrier, a thorny plant with waxy leaves and edible shoots. They taste reedy and grassy, with a slight buttery finish.

Pope tells me these exercises push us through the “green wall” that most people see in the woods when we’re surrounded by trees and plants but have no idea what they are. By learning which ones are good for food, fire, or shelter, we not only improve our outdoor skills, but we also build a connection to nature.

Knowing how to start a fire is important to me, and I’m glad to have learned proper technique. But I understand Pope’s point, too: I’m looking at the woods around me differently, as though I’ve just discovered they have instructions embedded in them. This course hasn’t made me an expert, but I feel much more prepared to face the great outdoors alone.

Go to the Camping Guide
From the November 2019 issue