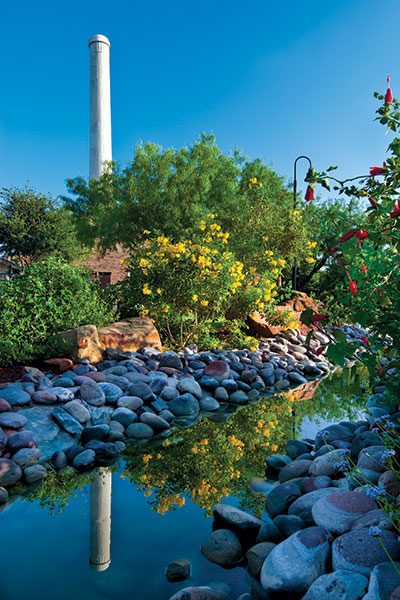 With the toll booths of the Hidalgo-McAllen-Reynosa International Bridge straight ahead, I veer left to the Old Hidalgo Pumphouse Museum & World Birding Center.

A cylindrical brick smokestack spikes 125 feet above the massive steam-driven pumps installed here on the Rio Grande between 1909 and 1912. For the next seven decades, the pumps moved irrigation water north to Rio Grande Valley fields planted in sugarcane, citrus, cabbage, and tomatoes.

Hidalgo’s steam-powered pumps are the last of their kind along the Rio Grande. Steam power aficionados, as well as curious visitors like me, come to marvel at the gigantic boilers, pumps, and engines that transformed the Valley into one of the nation’s richest agricultural centers, known then (and now) as the “Magic Valley.” A bonus for visitors who enjoy nature as well as history: The weathered, brick-and-corrugated-metal pumphouse sits in the midst of a World Birding Center site, where semitropical gardens overflow with blooming yellow esperanza, blue plumbago, and red dots of Turk’s cap. Crimson patch butterflies, along with bandit-masked great kiskadees and buff-bellied hummingbirds, flit past me as I walk to the restored pumphouse to explore its role in Texas’ agricultural history.

I start the self-guided tour at the three 20-foot-tall, brick-walled boilers, which stretch along the pumphouse’s east side. During the pumphouse’s first decade, mesquite—cleared from brush land being readied for farming—fueled the boilers, which created the steam that powered the pumps. As many as 408,000 gallons per minute flowed from the river through the pumphouse to the fields during peak irrigation months. Additional boilers and larger steam engines were installed by 1910, even though steam engines were being replaced by more efficient electric engines elsewhere in the nation. I open an eye-level door to view rows of slanted water tubes rising inside Boiler #1 and catch the faint smell of old metal. Kneeling, I stick my head inside the smokestack and spot blue sky way up.

Pumphouse director Lisa Diaz leads me west into the heart of the pumphouse and onto the long catwalk suspended above the pump pits, which descend 17 to 26 feet below ground level. Seen from above, the two huge compound steam engines, two natural gas engines, five centrifugal pumps, and the pipes for water intake and discharge—all painted white—remind me of a LEGO assembly done by giants. Really, the only thing missing is the rhythmic hiss and chug of the steam engines and pumps, the audible heartbeat. 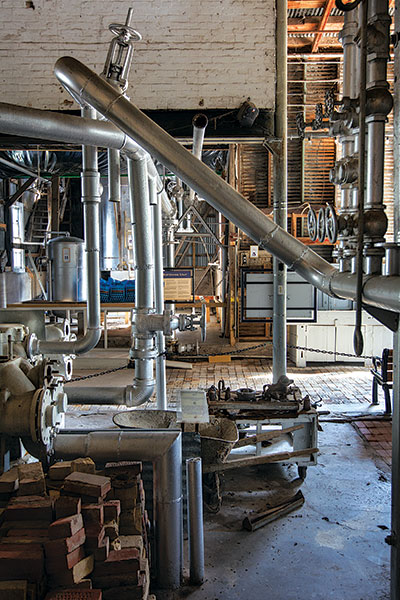 See the gigantic boilers, pumps and engines that transformed the Valley into one of the nation’s richest agricultural centers.

The Visitor’s Center, on the pumphouse’s north side, houses a small interactive museum highlighting the agricultural boom that followed the construction of canals, pumphouses, and a railroad in the Valley in the early 1900s.The population surged from 22,000 in 1900 to 154,500 in 1930 as new farmers prospered growing vegetables, cotton, and citrus. A sign on a shoulder-high bale of cotton notes that it took 1 million gallons of water to grow the fibers in the 500-pound rectangle. At another display, I press a button to see the irrigation path to 72,000 acres of fields in McAllen, San Juan, Pharr, and Alamo. Without that water, deep South Texas would have likely remained unusable for agriculture.

Outside the pumphouse on the west, enormous intake pipes dive down to the channel that was the Rio Grande until a 1933 hurricane shifted the course of the riverbed. The dredged channel diverted water to the pumphouse until the facility was abandoned in 1983. As the facility was being dismantled, veterinarian Robert Norton stepped in to save the Rio Grande’s last steam engines and original pumphouse. Driven by a love of Valley history and steam power, he and a squad of volunteers restored the pumphouse and its equipment, secured its spot in the National Register of Historic Places, and saw it reopen as a museum in 1999.

Hidalgo resident Walter Wisdom, whose father worked at the pumphouse for some 42 years, recalls a childhood spent playing on the pumphouse grounds. He tells me about jumping off the pumphouse roof into the deepest part of the discharge pool, which today is a grassy amphitheater. “We never realized how dangerous it was,” he says. “You’d hear the rumble and clank of the steam engines and see the steam pouring out. When the Worthington engine was running, you could hear it all over town. Our front door would rattle.”

Now part of a wildlife corridor, looped by a five-mile bike trail and bordered by wild olive and huisache trees, the pumphouse pays tribute to visionaries who created a green and Magic Valley by simply adding water.