Riches of the Red Beds

Written by Lois Rodriguez, Photographs by Russell A. Graves | From the August 2015 issue | Updated: July 16, 2015 | Filed Under: detourTRAVEL 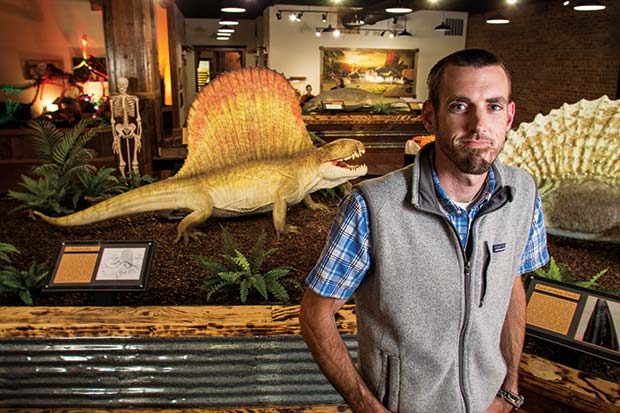 Museum Director Chris Flis and a replica Dimetrodon in the Whiteside Museum of Natural History.

Just two miles from Seymour, a handful of paleontologists and volunteers meticulously scrape and brush flecks of red and gray dirt away from their latest discovery: a fossilized Dimetrodon that they’ve named Mary.

The jumble of bones might confuse the untrained eye, but the excavators know exactly what they’re looking for as they prepare the skeleton for the short move to the Whiteside Museum of Natural History.

At the museum in Seymour, located 50 miles southwest of Wichita Falls, staff members and volunteers will clean Mary’s fossilized bones, cast replicas, and study them for clues into Mary’s life and times—all the while demonstrating the process and their findings to museum visitors.

Opened in June 2014, the Whiteside Museum is dedicated to exploring and interpreting the paleontological treasures of Baylor County and the surrounding “Texas red beds”—a layer of bedrock stretching from Seymour to Oklahoma and eastern New Mexico that contains a rich concentration of pre-dinosaur reptile and amphibian fossils from the Permian period of roughly 287 million years ago. Along with exhibits on creatures from the Permian, the museum also highlights the region’s contemporary wildlife with displays focusing on mammals and reptiles.

“We have these tremendous fossil records in our own backyard, and people need to understand how important that natural history is to the area,” says Clyde Whiteside, a retired state district judge, state legislator, and oilman who’s the sole benefactor of the museum. “Seymour, like a lot of small towns, has seen better days, but we know this museum will help the town because it is something unique to this area.”

Scientists and fossil hunters have been digging in Baylor County’s Texas red beds—more formally known as Lower Permian bone beds—since the 1870s, unearthing specimens that are on display at The Smithsonian, the Houston Museum of Natural Science, the Perot Museum of Nature and Science in Dallas, and other museums around the world. Over time, torrential downpours have exposed hillsides of red dirt and sedimentary rock among the semi-arid, short-grass rolling plains. These layers of sediment once were small wetlands. When prehistoric animals died in the wetlands, they were covered in mud and eventually fossilized.

Whiteside Museum Director Chris Flis says the exhibits are designed to provide visitors with an interactive experience and notes the “paleontology prep lab” as one of the highlights.

Robert Bakker, a paleontologist from the Houston Museum of Natural Science who conducts excavations in the area, says Baylor County is home to some of the most complete fossil records of the various species that existed in this part of the world in the Permian period. Among them were Dimetrodons like Mary, one of the earliest dominant land predators. Fierce hunters, Dimetrodons were seven to 14 feet long, weighed up to 600 pounds, and had fins up to four feet tall on their backs.

A replica of a Dimetrodon takes center stage in the Whiteside Museum’s main hall. Located in a former car dealership across the street from Seymour City Hall, the museum consists of three rooms of exhibits and a lab where recovered fossils are prepped for display. The building’s facade has a vintage Main Street look of red brick and bay windows, while its side is painted with a colorful mural of pre-dinosaur Permian creatures navigating verdant swampland.

Whiteside Museum Director Chris Flis says the exhibits are designed to provide visitors with an interactive experience and notes the “paleontology prep lab” as one of the highlights. “Folks can see paleontology research up-close-and-personal and don’t have to stand behind a glass to see fossils,” says Flis, who came to Seymour from the Houston Museum of Natural History to help establish the museum. “They can walk right in and have a conversation with a paleontologist, and they can touch real fossils.”

As part of the museum’s outreach program, volunteers are invited to help in the prep lab. Flis says he’s also working on a program to get more volunteers out into the field for fossil excavations, which are all located on private land.

Along with the Dimetrodon, the museum’s display of Permian-period animals includes the fossils of a Seymouria baylorensis (named for the town and the county), a creature that was two feet long and had a flat, triangular head that made it look like a hybrid between a reptile and an amphibian. Also on display, the fossilized skeleton of the Eryops—the last of the big-bodied, land-mobile amphibians—shares a resemblance with the modern-day alligator.

The museum also displays a life-size, replica head of a Tyrannosaurus rex, measuring about seven feet long and four feet tall, even though the dinosaur was not local to the area and lived in a more recent era than the Permian. The size and features are familiar to what most of us think of as a T-rex, but this version reflects the latest scientific thinking on the species’ appearance: It has feathers—not feathers like you’d see on a bird’s wing but the hair-like feathers akin to a turkey’s beard. These feathers cover T-rex’s head and even form a small, goatee-like appendage under its chin.

Adjacent to the main hall is a room dedicated to wildlife species that now thrive in the area. Bobcats, coyotes, and a host of other mounted specimens are included in the interpretive area. In the back of the museum is a live reptile exhibit with snakes and lizards. The reptile exhibit, Flis explains, helps connect the Seymour area’s natural history with its present environment.

Flis says the Whiteside Museum is uniquely positioned to explore and research the Lower Permian bone beds, and it has five active dig sites in Baylor County. Since last summer, the museum has published three abstracts in scientific journals based on the discoveries they’ve made.

“What’s really cool is that local residents help dig up these ancient creatures and move them to the museum,” Flis says. “It’s always fun to tell one of the local farmers who’s offered his tractor to help move an 800-pound block of old bones that it’s the first time in 287 million years the animal has left the ground. That’s significant.”