Sit Back and Enjoy the View on a Recumbent Tricycle Tour 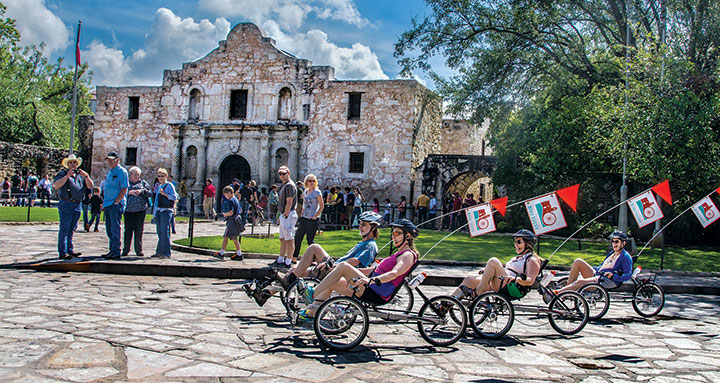 I feel a tug of skepticism as I test my tricycle legs at a storage facility just north of downtown San Antonio, preparing for this self-propelled tour.

We wend in loose formation along the bank of the San Antonio River and traverse surface streets during the tour.

Dubious glances shoot among the other group members settling into their own three-wheelers, which resemble squat director chairs with handlebars and pedals. Corrugated steel doors hemming an austere concrete driveway hardly seem the trailhead for a picturesque excursion. And did I mention we’re on trikes?

Steve Wood, the silver-haired proprietor of San Antonio Bike Tours, kits us out with helmets and two-way intercom headphones as he explains the perks of recumbent tricycles, including their ergonomics and stability. He also runs down some potential pitfalls: Front-only brakes can pitch you forward upon abrupt stops, and dropping a foot from a pedal under a moving bike can result in injury. Sounds treacherous, but in fact this homegrown operation has been essentially incident-free since its inception in 2010.

Steve lowers himself into his brightly decorated vessel, a sleek bullet-shaped velomobile, and we follow him, pumping toward the storage facility exit. “You may want to take pictures on this tour,” his voice intones through my earpiece, “but between your trikes and my velomobile, people will be snapping plenty of us today.” I’ll tally more than a dozen such shutterbugs before I stop counting.

As we trundle out of the gate, our kickoff location suddenly makes sense. We’re perched on a bank of the shimmering, bottle-green San Antonio River, embarking on a six-hour jaunt—called the Southtown and Missions Tour—that follows the watercourse, then veers through downtown, the King William Historic District’s mansion-lined streets, and the artsy Southtown neighborhood, before rejoining the river at the Mission Trails.

We coast down an access ramp onto the River Walk Museum Reach, a 1.3-mile stretch of paths, parks, public art, and museums, which opened in 2009 and remains less crowded than the popular paseo downtown. Within the tour’s first 20 minutes, our group has slipped by lush native landscaping, the restored Pearl Brewery mixed-use complex with its chic bars and restaurants, the San Antonio Museum of Art, and the historic mansion that houses VFW Post 76, the oldest VFW post in Texas. Here, Steve assures us, we could find “the cheapest beer on the river.”

I quickly grasp how perfectly suited recumbent tricycles are for sightseeing. If something piques my curiosity, I slow to a crawl unpreoccupied by balance demands. Although I keep my eyes on the road ahead, I can safely swivel my gaze for long rubbernecking moments that I would never consider on a bicycle. Thanks to the intercom headset, we can hear Steve’s twangy patter clearly as we wend in loose formation along the riverbanks without having to bunch up in a peloton. Unfettered by logistical constraints, we will venture across streets, plazas, and parks, in front of the Alamo, and even thread through the Pearl’s buzzing weekly farmer’s market.

We hop off the Museum Reach at Brooklyn Street, where rushing water pours into an aquatic elevator for river barges, the only river lock-and-dam system in Texas. Beyond it begins the River Walk’s downtown reach, with pathways too narrow for bikes—or trikes—so we traverse surface streets for several blocks. The narration skims onto new topics without skipping a beat.

San Antonio Bike Tours grew out of a hobby. Now certified by the Professional Tour Guide Association of San Antonio and a “tourism ambassador” of the San Antonio Convention & Visitors Bureau, Steve breezes through architecture, history, city politics, and other topics with folksy familiarity. “My knowledge doesn’t always run that deep, but I’m broad,” he tells me later, pausing reflectively. “I’m not really good on birds, but I know a scissor-tailed flycatcher when I see one.”

Tour routes may vary depending on conditions, construction, and even customer interest. On our trip, we cruise by sites including the Alamodome, HemisFair Park, the Hays Street Bridge, the Spanish Governor’s Palace, and Sunset Station before jutting through the King William District and onto the San Antonio Missions National Historic Park riverside trails. At Mission San José y San Miguel de Aguayo, founded nearly 300 years ago, we dismount for an excursion through stone buildings, a watermill, and the still active Catholic church with its acclaimed baroque architectural feature, the Rose Window.

After 25 miles of sights, scenery, a heaping fruit cup at Fruteria La Mission, and a beer garden pit stop at the The Friendly Spot Ice House, 60-year-old Calgary visitor Janice Carlyle reports that her initial skepticism has vanished. The veteran bicycle tourist had never so much as touched a recumbent tricycle before. “We definitely saw things we wouldn’t otherwise have gotten to see, and after four hours, my wrists and back feel great,” she says.

Myself, I gained a number of insights into my own backyard. I live and work downtown, and I regularly run and cycle along the river. Yet peddling those richly narrated routes seated in recline, I could have been an uninitiated visitor. Count me sold on San Antonio—and on recumbent tricycles.