It’s the Holidays Year Round at Fredericksburg's Christmas Store 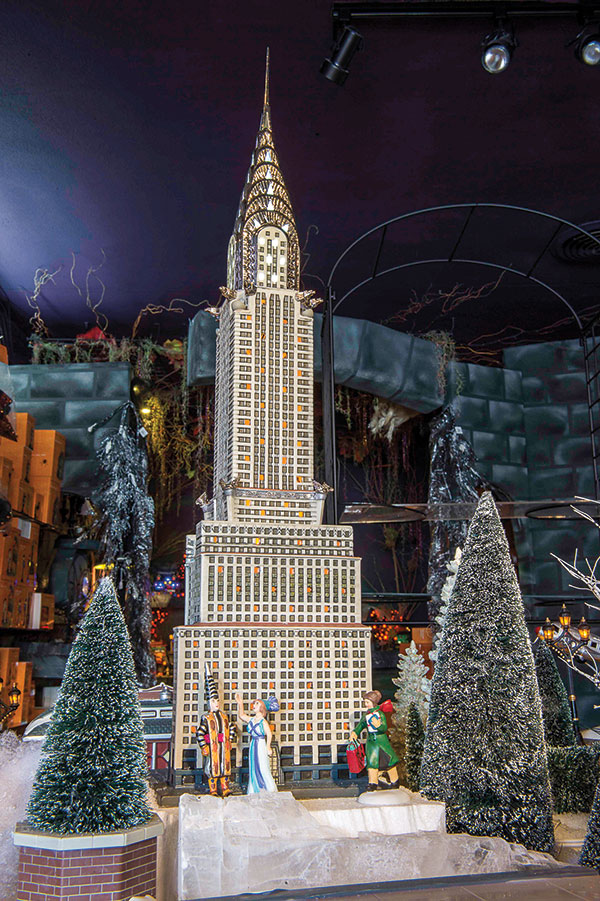 This December, when I string my lights and trim my tree and light my menorah, I have four new friends to help me ring in the holiday cheer. Four miniature ceramic figurines, to be exact. Dressed in wintry clothes and perched on patches of white faux snow, my people are all busily headed somewhere. One lady, clutching a bag of wrapped gifts with another under her arm, is “walking” so swiftly her scarf flies behind her.

The expansive quirkiness is so endearing that at first you may not realize how carefully curated the store is.

One of my men is pulled along by his dog, which wears a red flannel sweater to match his master’s. I impulsively purchased my figurines, which are meant to be part of a sprawling Christmas-village display, last spring at Fredericksburg’s Christmas Store. And now I’m responsible for staging them a home for the holidays.

Nestled between antiques stores and beer gardens on Fredericksburg’s bustling Main Street, the Christmas Store jingles—and jangles—year round. Amid mounds of shimmery snow-dust and greenery, ceramic Santas reign like kings from windowsills, grinning jollily from their twinkling thrones. Inside, psychedelic mushroom ornaments hang from the branches of plastic, neon trees, their eye-catching glow straddling that amorphous line between funky-cool and kitschy. It’s a subjective line—overdone versus classic, gaudy versus hip, sentimental versus cheesy—that the Christmas Store deftly walks throughout its 10,000 square feet of cheer. Costume jewelry festoons stuffed reindeer, and artificial trees of many colors and sizes sparkle and heave under the weight of eclectic ornaments. There’s a lot of cat stuff. An entire alcove is dedicated to funny wine sayings and martini-glass charms, as if to say, we get it: There’s a reason why we drink around the holidays.

The expansive quirkiness is so endearing that at first you may not realize how carefully curated the store is. Twin brothers John and Don Mooring and their cousin Beth Watson, the store’s energetic owners, know what they’re doing. Before John and Don became partners, they worked as interior designers in Los Angeles and came to Fredericksburg every so often to help Beth “make the shop pretty.” About a decade ago, the brothers ditched West Hollywood for the Hill Country, where they now live with their four cats and their blue beach bikes, which are equipped with cup holders (for wine!) and bells for greeting folks about town. The three partners aren’t just local businessmen—they’re engaged citizens and advocates. When you visit, don’t leave without picking up their list of favorite local shops and restaurants.

In a room devoted to ornaments made by the popular Christopher Radko company, extraordinary and intricate glass-blown ornaments line the shelves. Stacked on the floor, red-and-green cardboard boxes hold assortments of the company’s “Shiny-Brite” ornaments, which harken back to classic glass ornaments of the ’40s and ’50s. But all the Radko ornaments here aren’t traditional: There are also sparkling candy skulls, green pickles, and blonde mermaids to hang from your tree. Some ornaments look like characters from a Tim Burton movie—these are made in Italy, John explains, and they’re blown without a mold. This year’s pièce de résistance, though, is “The Prince of the Hill Country,” featuring a slender Santa Claus figure sporting an intricately painted yellow-and-black cape and a fluffy white beard. Each year, John designs a special-edition ornament to be made by the Christopher Radko artisans in Poland; they are sold exclusively at the Christmas Store.

All told, there are eight rooms filled with ornaments, trinkets, and holiday ephemera, presented with such charm and enthusiasm that even Scrooge might muster a smile. It’s in the last room—known casually as “the Christmas village room”—where I find my people, creations of the Department 56 company out of Minneapolis. The Christmas Store in Fredericksburg is the country’s largest dealer of Department 56 collectibles. This makes the back room at the Christmas Store—a sprawling universe of tiny houses and ice-skating rinks and snowy train tracks, all carefully arranged and designed by Don—a mecca for serious fans. As someone who had never heard of Department 56 before my visit to the store, I have no idea what inspired me to buy my first village piece; I guess the bundled-up figures somehow spoke to me. I also have no idea what I’m planning to do with my miniature holiday people, which are part of the “Christmas in the City” series, without a starlit Chrysler building or snowy brownstone to place them under. We’ll see once I take them out of their box, but I have a feeling I may need to take another trip to see Don and John.