The Fruits of a Flood: The Canyon Lake Gorge 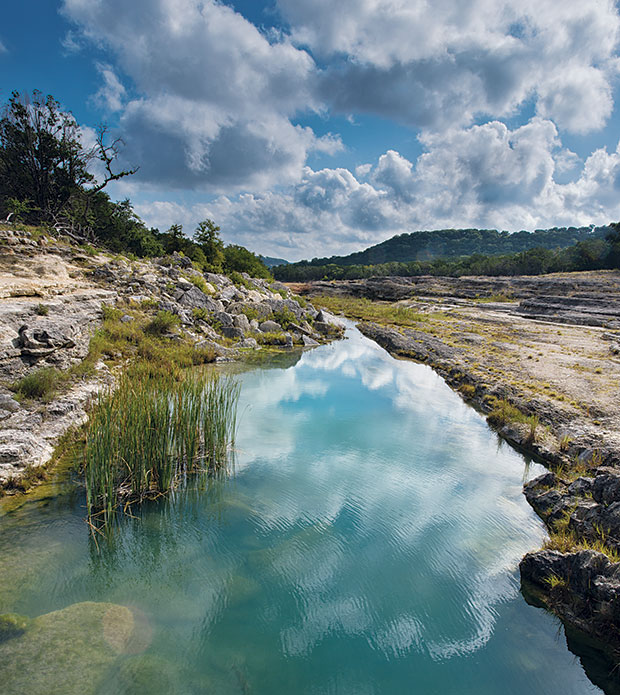 The floodwaters that topped the Canyon Lake spillway in 2002 carved a gorge more than a mile long.

In a matter of hours in July 2002, flooding rains unearthed eons of history beneath a swath of Hill Country landscape near New Braunfels. Nearly three feet of rainfall in one week pushed water over the emergency spillway of Canyon Lake for the first time since its 1964 creation, reaching a peak rate of roughly 67,000 cubic feet per second. By contrast, tubers on the Guadalupe River typically enjoy 350 cubic feet per second, and the Canyon Dam floodgates top out at 5,000 when wide open.

“It took three years to fill the original lake,” says Cinde Thomas-Jimenez, environmental education administrator for the Guadalupe-Blanco River Authority. “Water going over the spillway during the flood could have filled the lake one-and-a-half times.”

Water continued to top the emergency spillway for six weeks, carrying away enough rock and debris downstream to cover a football field 30 feet high. The churning mix carved a new gorge through 110-million-year-old Glen Rose limestone, 45 feet deep in places, and more than a mile long. Walking through the Canyon Lake Gorge and the geological tale now exposed, I’m reminded of traversing an underground cavern, only one that’s open to the sky.

Given its geological value, the gorge is accessible to the public only by guided tours, which are offered year-round by the Gorge Preservation Society in partnership with the Corps of Engineers and the river authority. Walking the gorge’s length from the spillway to the South Access Road covers 1.25 miles, drops 200 feet in elevation, and takes three hours, thanks to the many interesting things to see and discuss along the way. While the tour is not wheelchair accessible, most walkers can handle the path and the pace.

The tour’s first stop, on the flood-scoured spillway itself, is at the tracks of an Acrocanthosaurus, or “high-spined lizard.” The early Cretaceous-era predator dinosaur stood 38 feet tall and ran on its back legs like a Tyrannosaurus rex. This same type of dinosaur made the well-known tracks in Dinosaur Valley State Park near Glen Rose. 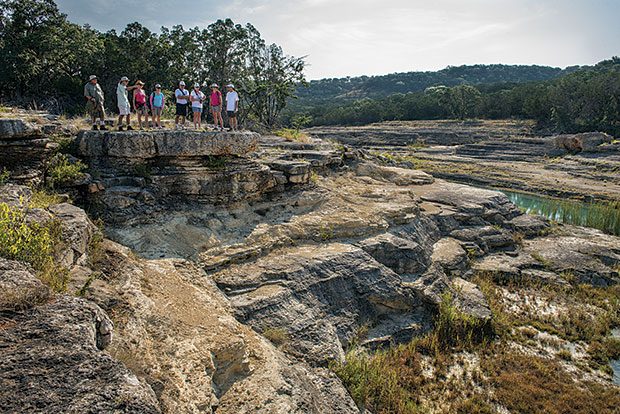 We proceeded down from the spillway on a set of stone steps, where boulders the size of SUVs pile in jumbled heaps like toy blocks dropped by giants, and twisted and gnarled oaks testify to both the power of the flood and the strength of the oaks’ roots. At the next stop, just below the spillway, I looked up at a 30-foot cliff topped by the thin soil typical of the Hill Country—held in place by grasses, oaks, and mesquite—and realized that, before the flood, I would have stood at the level of that cliff among that same vegetation. I struggled to imagine the power it took to change the landscape that much in such a short time.

We navigated a few small drop-offs—which require a bit of clambering but are maneuverable on two feet—then took man-made stairs down a larger rock face to admire a spring-fed pool and thriving wetland beneath it. From here, drop-offs continued like a huge stairway descending ever deeper in geologic time. Along the way, we passed springs, waterfalls, and aquamarine pools occupied by carp, perch, and bass, as well as smaller puddles alive with tadpoles. Thomas-Jimenez described how layers of sediment were deposited over millennia along an ancient shoreline to create the limestone. She also pointed out wispy bunches of sideoats grama and bushy bluestem grasses, cattails, dewberry vines, and other plants that have populated the gorge since the flood—as well as invasive ones that the preservation society hopes to control, namely poverty weed and Chinese tallow. In spring, a variety of wildflowers color the area. Resident animals include deer, raccoons, foxes, and lizards, as well as birds like herons, killdeer, and ducks.

But the real star of the tour is the rock and its variety of formations—multi-colored layers, dramatic uplifts, tiny shifts, ancient aquatic channels, and undulating surfaces whose ripples be-gan as wave-sculpted sand beneath a long-ago sea. You can even see the iconic Balcones Fault here, an unmistakable crack in the earth. And in several spots, geodes scattered through an uplifted rock layer catch the light. Below the highest waterfall, which tumbles about 15 feet, the gurgling stream of water disappears underground, leaving a deep slash of jumbled rock. Water emerges at the other side of the pit and spills into a pool with the surface area of several Olympic swimming pools and roughly seven feet deep. Its walls offer a veritable hydrogeology class in relief, with several springs that feed into the pool visible from the tour’s vantage point.

Almost everywhere along the tour, Thomas-Jimenez pointed out fossils representing different eras in the layers of limestone bedrock. Fossils also litter the rocky ground, among them bivalves, gastropods, worm tubes, sea urchins, and foraminifera, which resemble fine gravel until a closer look reveals the lentil-like shape of the small, single-celled organisms. Many of these “forms,” as they’re called for short, still occupy our planet.

Near the end of the tour, our group stopped at an outdoor classroom set in a semi-circle of shaded benches. As I rested on this peaceful spot, a breeze ruffling the trees overhead, I found it hard to imagine the power and force of the floodwaters that passed over this spot. I felt glad I wasn’t around during the flood, but I appreciate what it created.