Written by: Kathryn Jones
Photos by: Will van Overbeek

Written by Art Williams, Photographs by Will van Overbeek | From the August 2015 issue | Updated: April 21, 2018 | Filed Under: TRAVEL 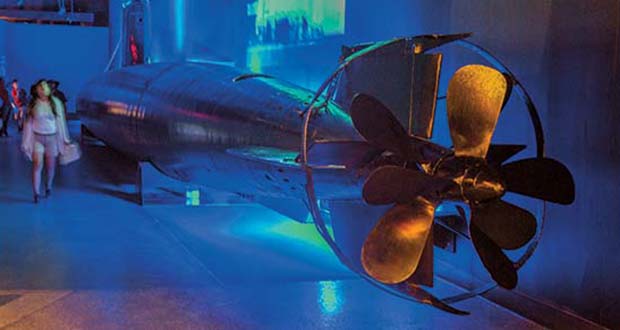 In a darkened room, veterans wearing World War II caps embroidered with command insignia peer down at a tabletop video screen. A map of the Philippine Islands flashes on.

Read more about the National Museum of the Pacific War.

Blue ships, representing American vessels, head into the archipelago. They encounter a much larger group of red Japanese ships coming out of the San Bernardino Strait that connects the Samar and Philippine seas.

Thus begins one of the most significant naval skirmishes of the war’s Pacific Theater, the Battle off Samar, in October 1944. More than 70 years later, I watch the battle unfold like a video game at the National Museum of the Pacific War in Fredericksburg.

As the blue ships sail across the screen into harm’s way, the realization hits me. “My gosh, my father was on one of those!” I exclaim. The veterans look up with solemn faces and nod.

I am like many visitors who come to the museum to discover or relive personal stories of the past. In my case, I want to learn more about my father, Samuel Jones, who lives in Corpus Christi. He was just 17 when he left his rural Alabama home after the bombing of Pearl Harbor and enlisted in the U.S. Navy. After training in San Diego, the boy who had plowed peanut fields with mules was assigned to a heavy cruiser, the USS Portland, as a second gunner.

Nine weeks after entering the Navy, young Sam found himself in the Gilbert Islands engaged in a raid at Tarawa. Then at Guadalcanal, the USS Portland was heavily damaged in a night battle and was towed to Sydney, Australia. “All of us guys, we never had any youth,” my dad once told me. “Some of us went from being country boys to men right away.”

As the war in the Pacific heated up, Sam was transferred to an escort aircraft carrier, the USS Kalinin Bay. When General Douglas MacArthur launched a mission to retake the Philippines, the Kalinin Bay was one of the ships in a Navy task unit called “Taffy 3,” made up of six U.S. escort carriers, three destroyers, and four destroyer escorts. Then the Imperial Japanese Navy’s Center Force surprised them. Outnumbered and facing four enemy battleships, six heavy cruisers, two light cruisers, and 12 destroyers, Taffy 3 fought so hard that the Japanese retreated.

As I’ve grown older, I’ve wanted to make a more personal connection with my father’s war. So when he turned 90 last December, I promised him a trip to the Pacific War museum. Neither of us had been there before. I had hoped we could make the trip around Memorial Day.

Things didn’t go the way I planned. A bout with pneumonia and a hospital stay in early May left Dad feeling too weak to travel to Fredericksburg, let alone stroll through the 33,000-square-foot George H.W. Bush Gallery that houses most of the museum’s World War II artifacts. The museum offers scooters, but I knew my father wouldn’t go for that. As the longtime curator of orchids at the South Texas Botanical Gardens & Nature Center, he takes care of thousands of orchids every day, and the center this year named its new orchid conservatory for him. He’s used to being active and independent.

I decided if I couldn’t bring him to the museum, I would bring part of the experience to him. A few days after Memorial Day, my husband, Dan, and I drove from our home south of Glen Rose to Fredericksburg, a town we had visited numerous times for its wineries and wildflowers. We quickly spotted the museum, a contrast to the quaint shops and gingerbread-trimmed buildings downtown. A conning tower of the submarine USS Pintado loomed in front of the modern structure.

Rather than join a group tour, we explored the Bush Gallery at our own pace (a free audio wand is available, too). We only had an afternoon to see the museum and that wasn’t nearly long enough—we could have spent a day or two there (the ticket price covers 48 hours for those who want to view it at a more leisurely pace).

The sheer quantity of artifacts impressed us, but so did the quality. Many exhibits use interactive features, transforming the experience from passive to engaging.

The museum tells the World War II story chronologically, so one of the first exhibits depicts the December 1941 attack on Pearl Harbor, Hawaii, that caused the United States to join the war. We entered a dark space with a long, narrow submarine backlit with a blue light. This was one of five Japanese “midget subs” from the Pearl Harbor attack and one of 50 built for the Imperial Japanese Navy. Images of depth charges being dropped ran on the wall behind the sub and sounds of explosions rattled my ribcage. I felt like I was there, if only for a few moments.

The sub on display, I later learned, ran aground on Oahu and was captured as a war prize. It was put on tour in the United States to help sell war bonds, then after the war spent several decades on display in Key West, Florida, before making the Fredericksburg museum its home.

As we wove our way through the collection, I gained more understanding about the Pacific War than I ever had from history books. Hopping from island to island and battle to battle, the exhibits traced the interwoven roles of the Army Air Forces, Army, Navy, Marine Corps, Coast Guard, Merchant Marine, and Texas weapons factories with text, photos, videos, and displays of artifacts, including a B-25 bomber, Wildcat fighter, and a Japanese float plane and dive bomber.

But the part of the museum I wanted to see the most focused on the Philippines. I knew I had found it when I spotted a photograph of General MacArthur covering a wall along with his famous quote, “I shall return,” a pledge to come back and free the Philippines after he was forced to flee in 1942.

The Leyte Gulf exhibit described the Battle off Samar in more detail than I had ever heard in my father’s stories. The Kalinin Bay and the rest of Taffy 3 were preparing to support MacArthur when, early on October 25, 1944, they received word that a sizable Japanese fleet was approaching. The Center Force vessels under Vice Admiral Takeo Kurita somehow had maneuvered through the narrow San Bernardino Strait and headed toward Samar. When they encountered the Taffy 3 ships, they opened fire.

The Kalinin Bay, the trailing ship escort carrier, took direct hits from the Japanese battleships. The U.S. destroyers returned fire. Four diving kamikaze planes attacked the surviving U.S. ships, including the Kalinin Bay, damaging the flight deck and the aft port stack. Five men on the ship were killed and 60 injured, and the heavily damaged Kalinin Bay steamed to Manus, then San Diego, for repairs before heading back to the Philippines.

I had heard my father talk about Taffy 3, but its significance didn’t register until I saw the museum’s dramatic display about it. Later, I read an account on the Naval History and Heritage Command website: “As one of the fearless ships of ‘Taffy 3,’ Kalinin Bay had prevented a Japanese penetration into Leyte Gulf and saved General MacArthur’s beachhead in the Philippines.” It went on to call the Battle off Samar “one of the most memorable engagements in U.S. naval history. Outnumbered and outgunned, the slower ‘Taffy 3’ seemed fated for disaster, but the American ships defied the odds and gamely accepted the enemy’s challenge.”

After visiting the museum, I was armed with questions and I wanted to hear my father describe the battle in his own words. Dan and I spent the night in Fredericksburg, then drove to Corpus Christi the next day. I sat down with my dad and recorded a long conversation about his war experiences.

He explained that his job as plane captain on the Kalinin Bay was to get the aircraft fueled, warmed up, and ready for the pilots to take off. On the morning of the Battle off Samar, the ship’s aircraft had all launched, so Sam went to the mess hall to get coffee, then climbed up the catwalk back to the flight deck.

“All of a sudden on the starboard side it seemed like the whole ocean blew up,” he told me, excitement building in his voice. “Big spouts of water went up and came down and wet me. I was soaking wet—and it ruined my cup of coffee.” He laughed about that. “We were all looking up. The guns were all whirling around looking for aircraft because we knew it was bombers. And some guy behind me was hollering, ‘Look-ee there … my golly, look-ee there!’ And there was a long gray line, all blinking.”

That line across the water was the Japanese Center Force. The blinking meant the ships were firing their guns.

Sam and his friend Jack crawled on their hands and knees across the flight deck as shells whizzed over their heads. They sounded “like bacon frying,” my father said. The armor-piercing shells penetrated the ship’s hull, leaving jagged holes. When Sam scrambled back down the catwalk, he ripped open his elbow on the ragged metal. “Jack started hollering, ‘My God, your arm’s been shot off!’” Dad recalled. “Blood was all over my arm and dripping off the end of my fingers.”

Jack got a bucket of salt water and washed the wound, and they found some bandages to close it. The next day, Sam went to see the ship’s doctor, who chewed him out. “He told me, ‘You should have come down here yesterday. That arm belongs to the Navy. You don’t have any business jeopardizing it,’” my dad recalled with a chuckle.

I wanted to know how Taffy 3 defied the odds. “Did you know about all the maneuverings the Japanese were doing?” I asked. “It looked like you guys were really outgunned.”

“That’s not even a comparison—it was ridiculous,” he responded. “The Japanese could have sent one cruiser, just one cruiser in there and come alongside of us and blew us out of the water and went on about their business. We couldn’t understand why they didn’t make a move. They (Navy officials) surmised later that maybe the admiral mistakenly thought he had stumbled across the main American task force and he was a little reluctant to push it too far, we put up such a fuss.”

The Kalinin Bay was armed with only one five-inch gun. The destroyer escort USS Samuel B. Roberts’ job was to protect the escort carriers. “The heroic part of that whole battle was the destroyers,” my father said. “They would go around and around encircling us with a smoke screen, and finally the USS Samuel B. Roberts got shot almost half in two, but that ship still made a run on the Japanese knowing they were going to get blown out of the water.”

The Samuel B. Roberts sank, taking 89 sailors with her. My father said he feels lucky to be alive—and I feel lucky to have him as my dad, part of the “greatest generation” of veterans.

I still hope to take my father to the Fredericksburg museum and record more conversations to share with my family. Sam’s story lives at the museum, too, in those little blue ships moving around on a video screen, in the lines of history, and in me in a stronger way than ever before.