The Rogue Wildflower Hunters of Texas 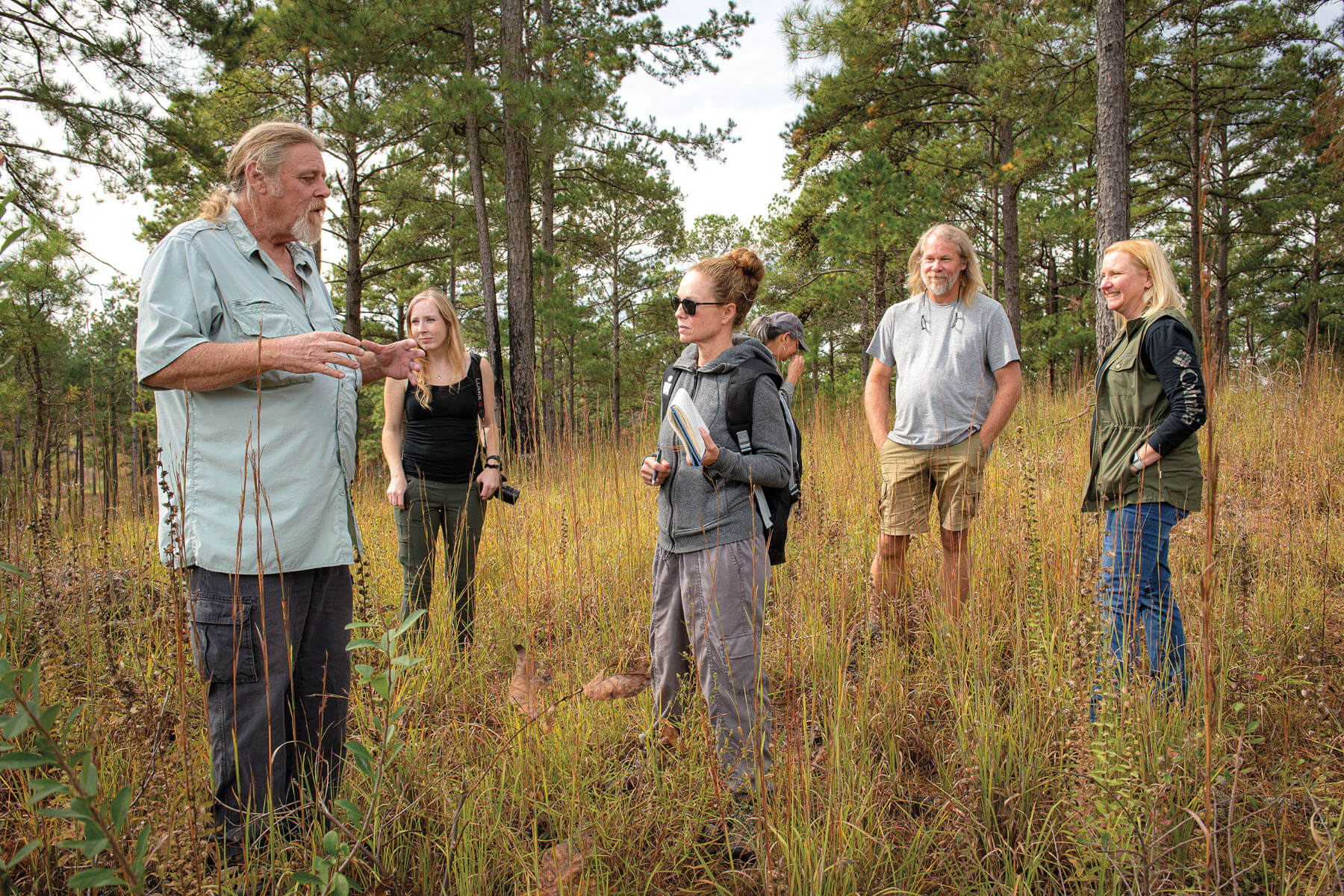 Throughout the year, a small group of botanists and wildflower enthusiasts regularly text each other GPS coordinates from across Texas. When the text comes, they mobilize. Their mission? Save some of the rarest flora in the state. For members like Michael Eason, head of San Antonio Botanical Garden’s rare plant conservation program and author of Wildflowers of Texas, heading to remote locations to save endangered plants is a passion.

“Part of it is also insanity,” he admits.

My quest to go rogue with these folks turns out to be more difficult than I expected. They’re often out in the field, so they’re hard to pin down. After months of trying, I prevail when Adam Black, a botanical and horticulture consultant, texts me a map with GPS coordinates and tells me to meet them in Nacogdoches on a Thursday in November. I throw snake boots into my trunk and drive out of Hutto on the country roads until I hit US 79, heading northeast toward the pine forests. 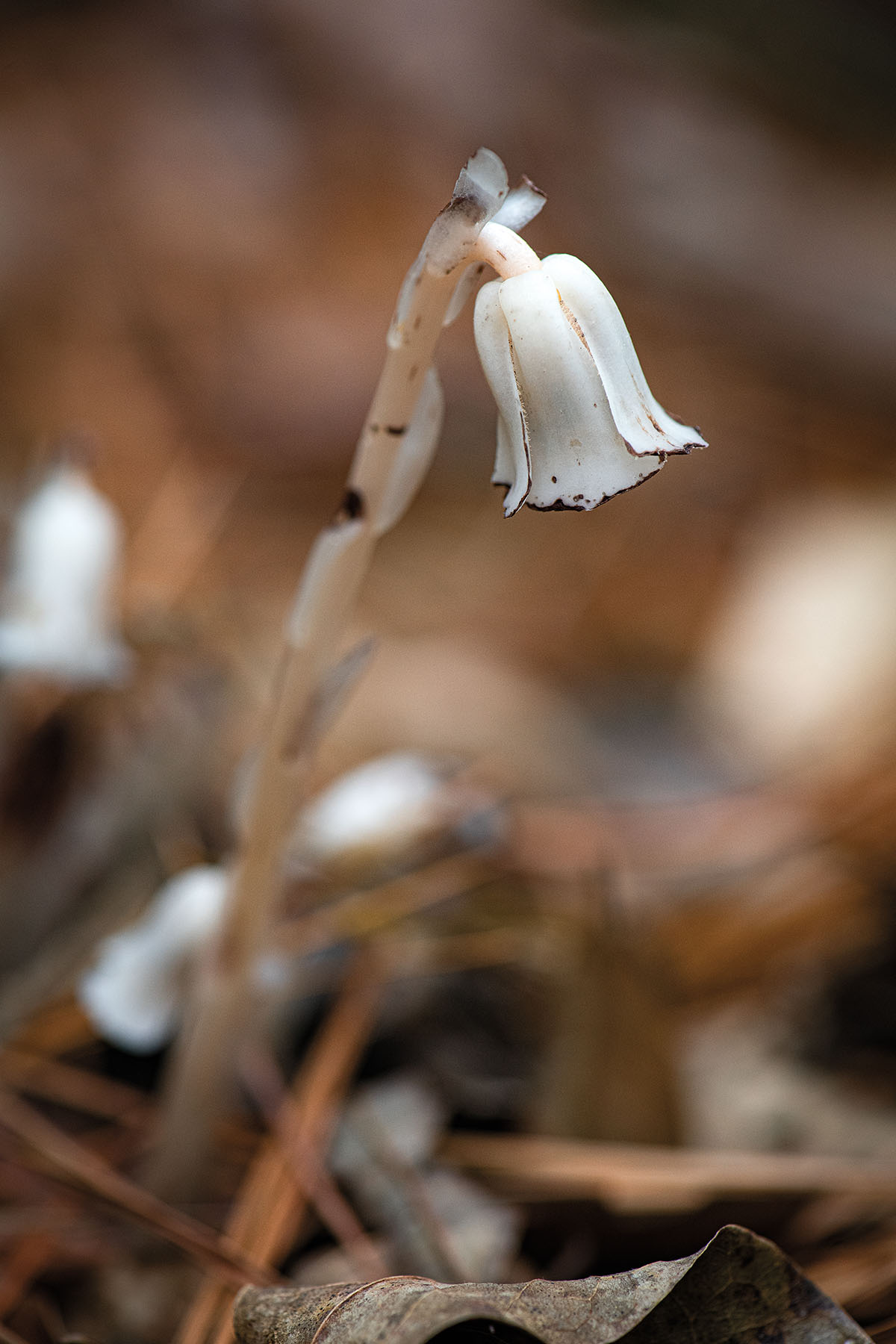 A ghost pipe, Emily Dickinson’s favorite flower, grows in the wild in Nacogdoches.

When I arrive, Black is at the gate to Winston 8 Ranch, a 3,000-acre tree farm that’s been part of Simon Winston’s family for generations. Less than 3% of land in Texas is public, so Black and the others rely on private landowners. Winston has been inviting plant lovers onto his land for years. In addition to planting pines for restorative purposes, Winston performs prescribed burns, which happen to allow dormant native plants to “breathe a sigh of relief and come up,” Black explains.

Eventually, the rest of the group materializes: Brandy Midura, a pharmacist who loves photographing rare plants; Suzanne Birmingham Walker, a biologist and consulting forester; Peter Loos, a botanist and plant propagator; and Dawn Stover, an agronomist for the Natural Resources Conservation Service.

Stover is careful about who she invites on these excursions since relationships with private landowners like Winston are crucial to her work. “I don’t want just any Joe Blow out here,” she says.

Eason, who couldn’t make the Nacogdoches trip, had told me the same thing when I first reached out to him in the summer of 2021: “You have to spend some time with us before we’ll start sharing information.” I had wanted to find out what drives people like him to spend hours crawling around in the muck searching for tiny bluets or featherleaf desert peonies.

He suggests I talk with Megan O’Connell, a conservation research botanist at the Botanical Research Institute of Texas in Fort Worth, who is part of a statewide effort to conserve native plants. O’Connell collects, catalogs, and replants rare wildflowers so they don’t disappear due to factors like climate change, urbanization, and nonsustainable farming and ranching.

At her office, she takes me into the Herbarium, a room with giant lockers full of botany records dating to 1791. Unlike most of us who seek out pretty bluebonnets and Indian paintbrushes in the spring for an Instagram pic, she’s paying attention to species like Dalea hallii, or Hall’s prairie clover, a native plant that’s a crucial part of the ecosystem. “People want to conserve things that are cute, like pandas,” O’Connell says. “Some flowers are not very charismatic, though.”

In addition to using the iNaturalist app, O’Connell relies on word-of-mouth from active plant hunters like Eason to find rare species. In the plant conservation community, there exists a “group consciousness and continual conversation,” O’Connell says. They are constantly letting each other know when they stumble upon something worth seeking out. “It’s very collaborative,” she says.

O’Connell once went on an orchid-hunting trip with Eason and Black in search of the rare Hexalectris orchid. They didn’t even have to trek off the grid in South Texas, where it’s known to be found. Instead, they crawled around on their hands and knees and found it in an urban park in the middle of Dallas, a spot where the orchid blooms at certain times of the year.

“Rescuing plants is triage. It’s reactionary,” O’Connell says. “You find out where something is, and you go.”

After we finish some homemade fig cake courtesy of Winston, he rounds up two vehicles. I hop in a Polaris with Midura, Walker, and Stover and ask them about the riskiest thing they’ve done in search of rare flora. Midura tells me she hiked a mountain in Spain alone looking for dewy pine on a day so windy she thought her kneecaps might break from the falls she was taking. Walker talks wistfully about a trip to Ireland, where she trekked through bogs on a rainy day searching for orchids. Later, Loos mentions he once hung upside down off a 50-foot bluff in Louisiana’s Tunica Hills with a rope around his waist to collect oakleaf hydrangea. 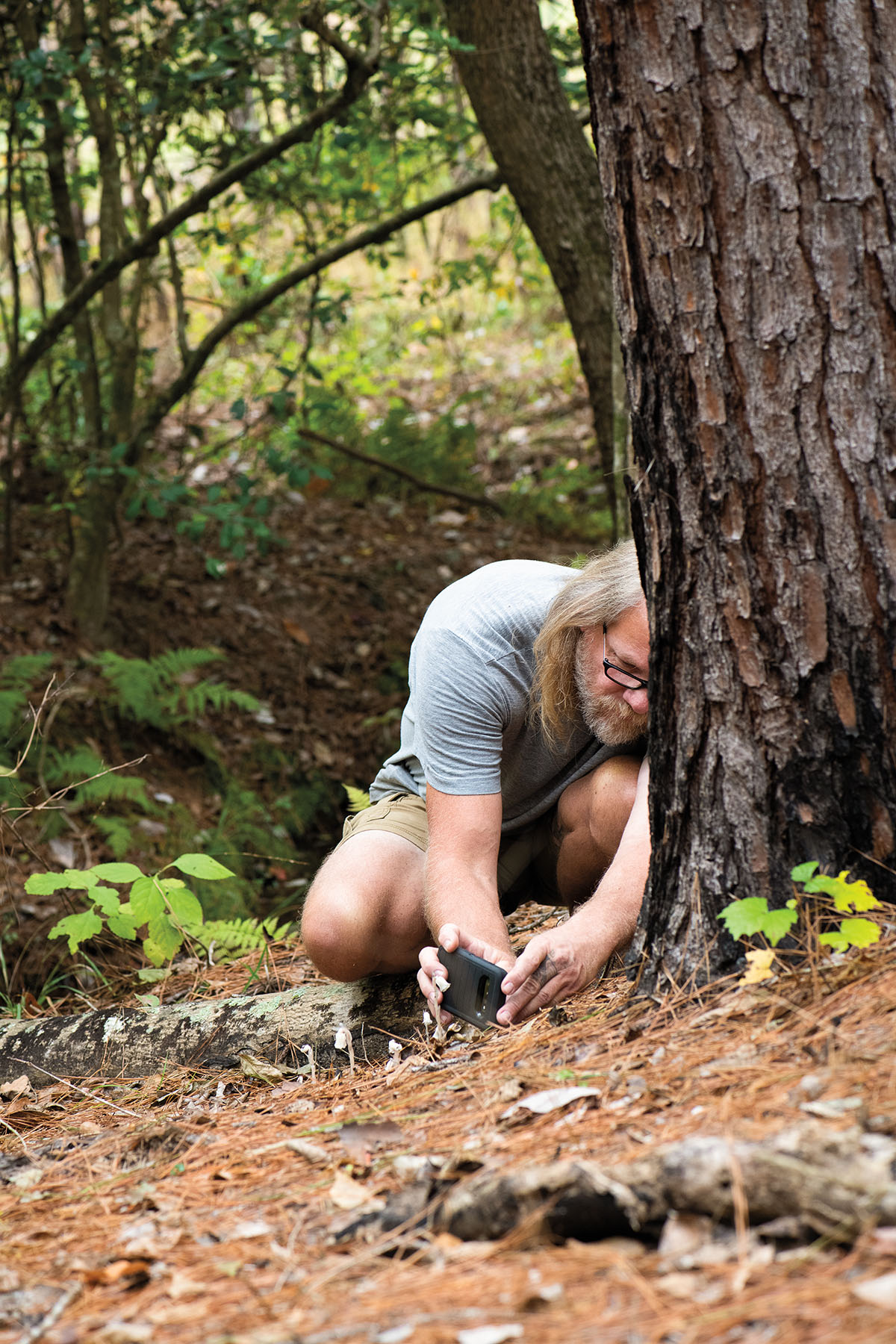 A few minutes into the drive, Stover spots some button gayfeather and we stop so she can gather seeds. She puts them into a paper bag as the group roams around and makes taxonomy jokes that go right over my head. I’m amazed by the fearlessness of each person. Before I can get out of the front seat, they’re off into the forest, knee-deep in brush. No one is wearing snake boots. I don’t want to seem like a wimp, so I follow their lead, praying that a rattlesnake isn’t nearby.

Since it’s November, we find some beautyberry, false foxglove, wax myrtle, azaleas, pink-scale blazing star, and the invasive Chinese tallow. “I refuse to call it a popcorn tree,” says Loos with disgust. He despises this nonnative species.

If Loos is the elder statesman and philosopher of the group, Black is the lone wanderer. He has a knack for disappearing and discovering the most unique species in the oddest of places. “My whole life is basically plants,” Black says. “Before I could talk, I’d gravitate toward lichens.”

At another stop, Loos points out Ilex vomitoria, commonly known as yaupon, a plant Cherokee and Caddo tribes in the area once made into tea and then vomited up in purification rituals. “I was not a happy camper the first time I tried it,” Loos says. Shortly after that, when he hands me some mountain mint and tells me to eat it, I’m a little wary because the word vomitoria is still fresh in my mind. But out of respect, I eat the mint. It’s like chewing on a leaf dunked in Listerine. 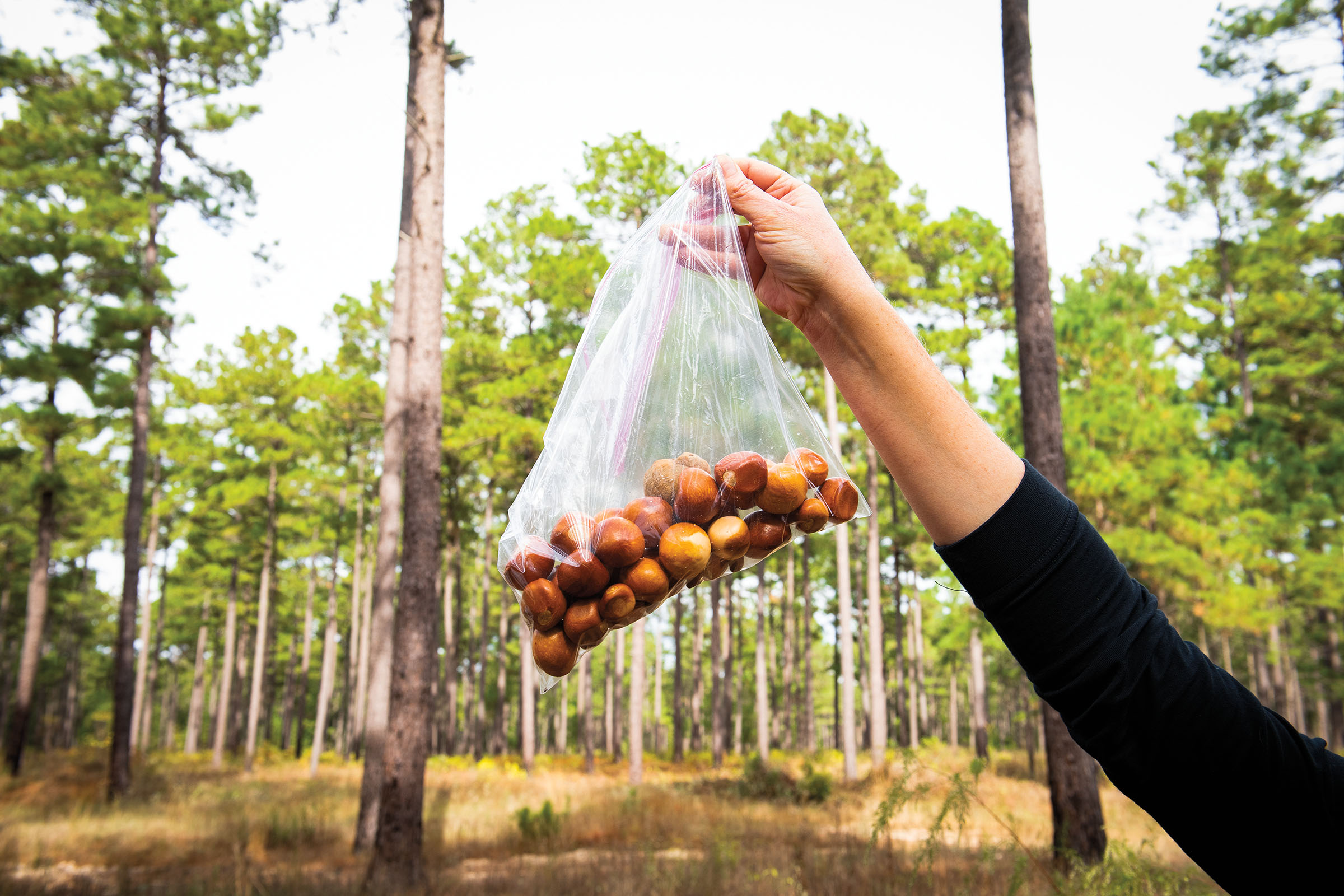 A bag of red buckeye seeds, ready for planting

“Where’s Sasquatch?” says Loos of Black, who has wandered off again. We find him crouched underneath a tree, taking photos of something that has him rapt. As we approach, I see a small clump of white flowers. Is it an elusive orchid? Mushrooms? We all get closer, and Midura yelps, “Ghost pipes!”

Ghost pipes—“the preferred flower of life,” according to poet Emily Dickinson—are some of the oddest wildflowers I’ve ever seen. Black explains they have no chlorophyll and indirectly derive nutrients from the tree via a fungus that grows on the tree’s roots. They seem like they’ve had the color drained right out of them.

Black eventually manages to find a single, tiny ladies’ tresses orchid nestled in the tall grass. How he spotted it, I have no idea. But there it was. A lone orchid among the pines.

The possibilities for discovery are endless. There are about 5,000 native plants in Texas, according to Scooter Cheatham, who in 1971 founded the Austin-based Useful Wild Plants of Texas project, which publishes scientific volumes of wild plants. But that number is always in flux. “While we’re talking, someone may have found another one,” Cheatham says.

Before we head back to the cabin, Winston requests we make one last stop to check out a red buckeye plant. It’s not in bloom, but you wouldn’t know it by the way everyone fawns over the thing.

“I see buckeyes every year, and I still act like I’ve never seen one,” Walker says. Stover pulls off several large, smooth brown seeds and hands me two. They tell me to rub them together for good luck and put them in my pocket.

We say our goodbyes, and I leave Nacogdoches intent on planting the seeds on my land. As I drive, I search the medians and country roads for wildflowers, even though it’s fall and nothing flashy is in bloom. I know there’s something magical out there, though, because I remember something Black told me: “If you stop and look, a whole world will open up.”

Try to find these rare wildflowers if you dare.

Lamb’s quarters is an annual, edible plant that can produce up to 75,000 seeds. It looks like a common weed, but it restores nutrients to the soil and can be used for nutritional or medicinal purposes. The small flowers, held above the leaves in tight spikes, can be found across the state from spring to fall.

Texas poppy-mallow is listed on the federal and state endangered plant list. The blooms look like dark red tulips, and they’re found in grasslands or shrublands in deep, sandy soil along the upper Colorado River. The best time to see them, if you’re lucky, is May to June.

Kentucky lady’s slipper orchids boast delicate pale, yellow flowers that look like … a lady’s slipper. The perennial, terrestrial orchids have been spotted in the deep Piney Woods of East Texas in April, and they can grow to be over 3 feet in height. Their global conservation status is “vulnerable.” 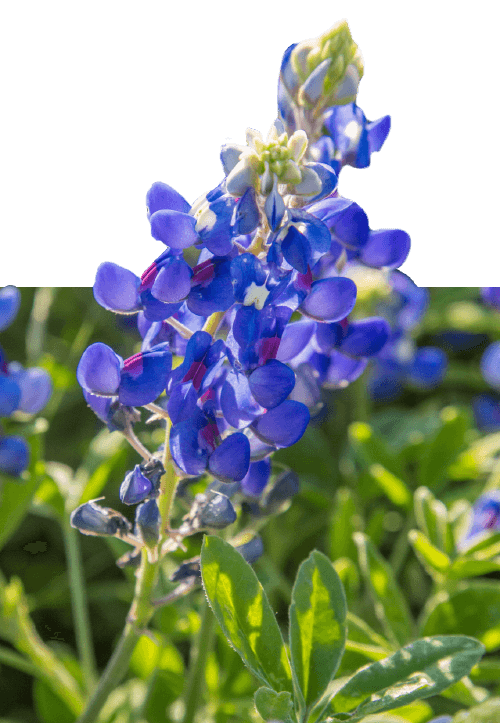 From plant identification to springtime road trips, read more on our Wildflower page
From the March 2022 issue