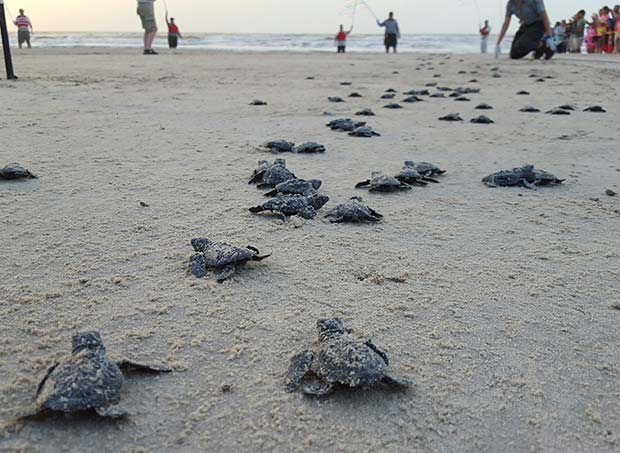 A race for the shoreline to begin the next challenging chapter of their lives.

I’m a NatGeo junkie, and I love seeing the magic of nature – pecking order in the primate world, hunting strategies in the wild, the courting calls and dances. It’s all so fascinating, so I was thrilled for the opportunity to see nature at work as we saw off more than 80 newly-hatched endangered Kemps ridley sea turtles at Padre Island National Seashore yesterday. There’ll be more opportunities this week, so you can check it out, too

More Padre Island National Seashore hatchling releases are expected through early August, including some slated for this week between Thursday, July 2-6. Many variables come into play, so, to confirm release dates, visit the park’s website, call the Turtle Hotline at 361/949-7163 and/or visit the park’s Facebook page for updates. 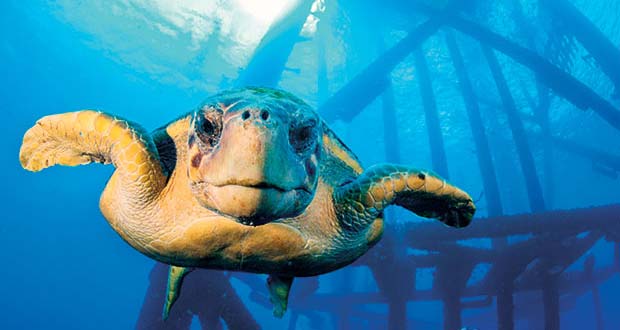 Learn more about sea turtles by visiting a rehabilitation or education center that houses them.

With this long on my bucket list, I’m glad to have finally made the time to witness the start of what, I hope, is a long, long life for the sea turtles.

Releases, which are free to attend, begin about 6:45 a.m., with onlookers meeting at the Malaquite Visitor Center. Viewing placement is based on first-come basis, so get there earlier if you don’t want to be 2-3 people deep, but volunteers help ensure that every spot is a good spot. Which, by the way, you’ll likely be as impressed as I was at how friendly and helpful all the volunteers were. No matter how many releases they have witnessed, they shared the passion and excitement with us all, and found ways to help make the experience more meaningful. 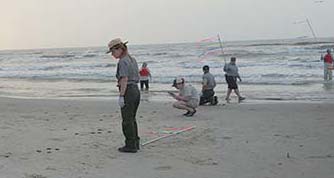 At the helm of this momentous event, releasing the hatchlings one by one, is National Park Service’s turtle rescue Program Director Donna Shaver. The kind and unassuming woman, named an Extraordinary Texan by Texas Highways magazine, has dedicated so much to saving the Kemps ridley sea turtle. Her efforts have facilitated the ongoing regrowth of the endangered sea turtle population, which has several predators, including humans in their native Mexico who harvest the eggs for food. By hatching and releasing the sea turtles from South Padre Island, that process of imprinting ensures that when the female sea turtles return to nest, it will be on these shores, where they are protected.

Without the conservation program, the expectation of survival for the sea turtles is as low as 1 in 100 or more.

Padre Island Education Coordinator William “Buzz” Botts says those in attendance play an important role in helping the sea turtles in their survival challenge as they begin their lives as hatchlings. As the soft, tiny newborns move across the beach, the crowd deters crabs that would otherwise come in for a snack. 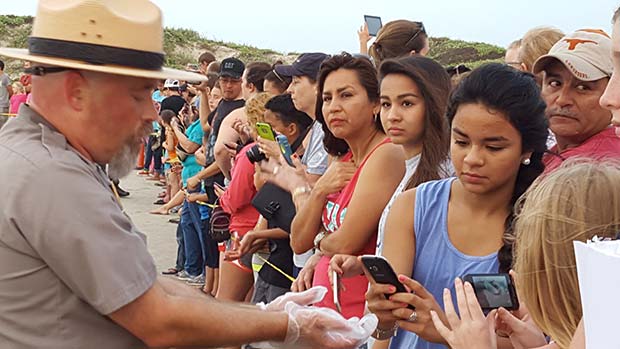 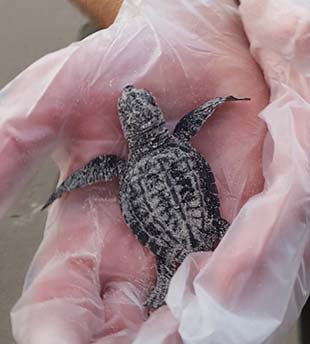 “Some people question why we don’t just put them in the water,” Botts says, but adds, “They have a built-in compass in their head. That crawl across the beach gets something in their GPS system working, and it helps them to imprint the location. One of these days, the lucky ones that make it against the odds will come back here to lay their eggs.”

The male sea turtles never return, but when the females do, they also become vulnerable again to predators such as coyotes.

The park’s turtle rescue program depends on a collective effort – the National Park Service, community and volunteers – to immediately find newly nested eggs and remove them to a hatchery, which is not open to the public. When the sea turtles hatch and are released from South Padre Island, they face a new series of survival challenges.

Once the sea turtles reach the water, Chief of Interpretation Patrick Gamman says they all go straight out 3 or 4 miles to floating mats called sargassum, which are characterized by small pockets of air that make the seaweed float. The sargassum will provide protection for a couple of years. Until then, Gamman colorfully adds, the baby sea turtles are like the “Oreos of the sea. Everyone wants to eat you!”

Botts says, “These survivor shows that we watch on TV have some definite challenges, but they don’t have anything at all on these little sea turtles. Appreciate the struggle they’re up against, but also appreciate something that brings us here – the miracle of getting to see rebirth.”