Written by Joe Nick Patoski, Photographs by Kenny Braun | From the October 2018 issue | Updated: September 1, 2022 | Filed Under: CultureFamily TravelMost Popular 2018PeopleThings to Do 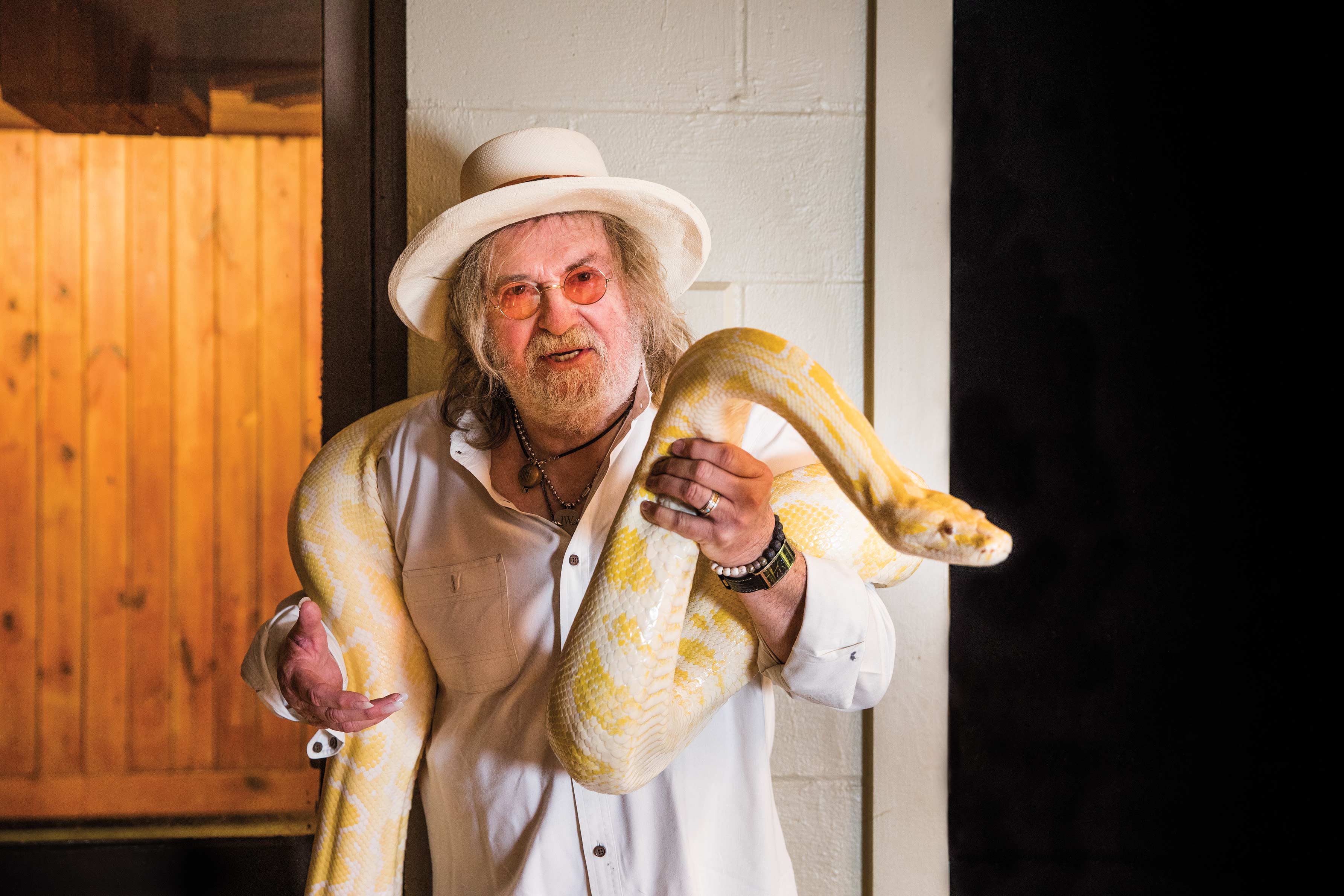 Any good songwriter knows when the muse strikes, write it down. For Ray Wylie Hubbard, it was maybe the 10,000th time he was driving southbound on Interstate 35 from New Braunfels toward San Antonio, passing Exit 182 at Engel Road and the so-big-you-can’t-miss-it sign that screamed “SNAKE FARM” in red and black letters. The words, meant to entice drivers to stop at the long-running roadside attraction, conjured the image of a farm full of snakes, and Hubbard physically shuddered.

“Actually, I went ‘Uggggghhhhhhh,’” he says, recalling the moment. Then inspiration struck. He thought to himself, “Just sounds nasty.” Why? “Because it’s a reptile house, not a cathedral,” he rationalized. “Yeah, pretty much is.”

His mind started racing. “Then it came to me: It’s a love song. It’s about a man who doesn’t like snakes, but he loves the woman who works at the Snake Farm,” says Hubbard, a resident of Wimberley, where all four venomous snakes found in Texas also reside.

“That’s true love,” he said. “So I thought, ‘What kind of woman would work at the Snake Farm?’ She’d dance like Little Egypt. She’d drink malt liquor. Have a tattoo of a python, probably eating a mouse. One of them would have a sailor hat that said Snake Farm.” As the song developed, he named her Ramona. “How come she works there? It’s got its charm. Nothing to do in the winter because the snakes are hibernating. And every once in a while, a kid gets bit.

“How do I end it?” Hubbard mused. “If he really loved her, and she said come on down here, he would go.”

“It all fell into place. I came home and wrote it down in about 15 minutes.” He dreamed up a snaky blues groove for the words and had himself a song.

“It’s a love song. It’s about a man who doesn’t like snakes, but he loves the woman who works at the
Snake Farm.”

That initial guttural response driving down I-35 turned out to be the hook to one of the hookiest songs Hubbard has ever written, and the punch line to the singalong chant “snake farm.” He recorded the song and released it on the album of the same name in 2006, and it has been part of his repertoire ever since—much like another song he wrote back in the 1970s, “Up Against the Wall Redneck Mother.”

Hubbard is no wannabe herpetologist, though. “I guess I’m not a snake fanatic, but they don’t bother me,” he allows. His only real-life connections are his free-range Medusa mane of hair and a rattlesnake tail that came with his old Gibson guitar. “It’s like a humidifier thing. Good mojo, too. I do have a pair of snake boots, but they’re pretty wore out.”

He had never been to the real Snake Farm before he wrote the song. Hubbard had heard the legend dating back to the ’60s—ask for change for a $100 bill at the counter, and you’ll be directed to trailers out back where a woman of ill repute awaits—but he didn’t put stock in the story. “Even if the legend was true, no way in hell was I going there,” he says.

The real Animal World & Snake Farm Zoo, as it is formally known, is a far cry from the Snake Farm of legend. The roadside attraction dates to 1967, before there was an interstate highway. It has grown since then—and grown up. Ramona, the trailers, and lingering reptile odor are nowhere to be found. The year after Hubbard released the album Snake Farm, the real version was purchased by Eric Trager, who updated and expanded the attraction. Today, it’s a sprawling private zoo with over 500 species of animals and state-of-the-art features including hands-on exhibitions scheduled throughout the day and week
(in summertime, the gator feedings on Sundays at 3 p.m. are particularly exciting). The core cinderblock-wall snake room remains, with 200 species on display.

“The first time I went in there, I realized the people were really nice, that they really cared about the snakes and the animals, that it wasn’t some kind of tourist trap,” Hubbard says. “I thought it was going to be a carny sideshow act.” Well, there is the rattlesnake pit, and don’t forget the cheesy Snake Farm T-shirts proudly worn by the New York punk band the Ramones. 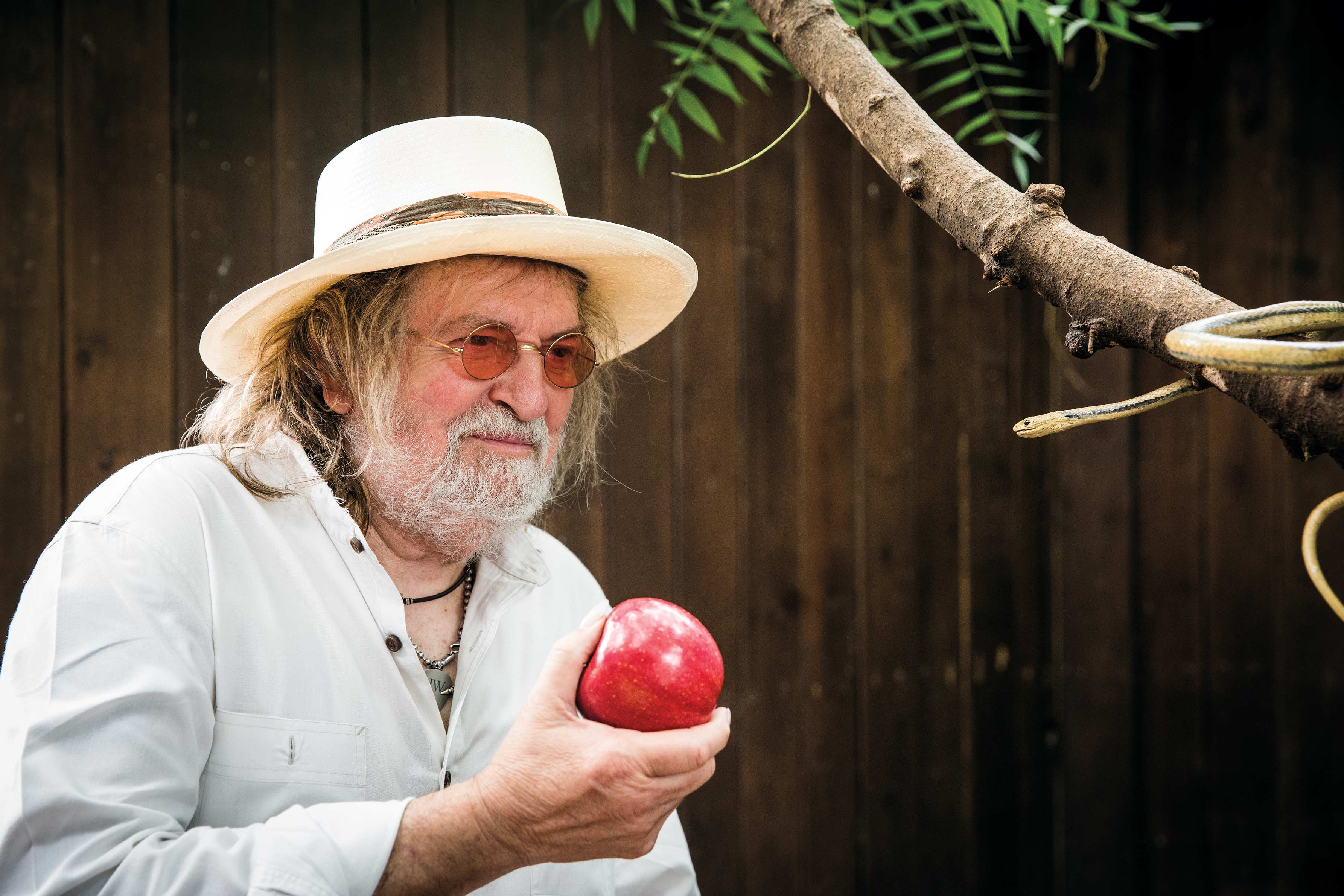 Stopping in for a visit this summer, Hubbard is greeted by snake wranglers Jarrod Forthman, the director of zoo development, and Alex England. “Are we doing Apollo?” Hubbard asks, anticipating a photo shoot with the farm’s star python.

“Apollo is in snake heaven,” Forthman informs him. “He lived a very good life. Today we’re bringing out his little brother Hercules.”

“Whatever you want to do,” Hubbard says with a slight air of resignation that seems to imply, “Be careful what you write.”

He gamely allows Hercules to be wrapped around his shoulders, while a small child is brought in to pose with Hubbard. But the kid starts to cry and drops out of the scene. Hubbard may have posed with 14-foot-long, 90-pound albino Burmese pythons enough to know them by name, but he hasn’t developed much of a kinship. “Snakes have a bad reputation because of Genesis, you know?” he says. “They’re hypnotizing. They can stare you down.”

“Then there are us reptile nuts: ‘Babe, you go to the zoo; I’m going to see the snakes.’”

Forthman acknowledges the image issue and explains that’s why the place is called Animal World & Snake Farm Zoo. “There are too many people who come here who don’t want to see snakes, so we made it a zoo,” Forthman says. “They come to see the cute fluffy stuff. Then there are us reptile nuts—‘Babe, you go to the zoo; I’m going to see the snakes.’”

“We’ll never get rid of Snake Farm,” he adds. “We’re going to have a new entrance and gift shop building, but there will always be these old pictures, that rattlesnake pit back there, a museum quality to it showing old-school stuff.”

While Hubbard poses with Hercules, a voice calls out, “My girlfriend told me to tell you she loves you.”

“Tell her to raise her standards,” Hubbard replies, not missing a beat. “Yeah boy, show business is my life,” he mutters to no one in particular.

Outside, in the Animal World zoo behind the snake house, Hubbard looks a whole lot more relaxed, suggesting that he’d much rather pet an Australian dingo or hold a baby monkey than wrap another monster snake around his neck. A family of four from Sherman asks if they can take a photograph with him. Mom and dad are huge fans. Hubbard smiles accommodatingly and engages the couple in small talk. He then announces to one and all that he’d hang longer, but he’s got an appointment at a guitar shop in Austin, and if there’s anything Hubbard loves more than his wife-and-manager, Judy, and six-stringed instruments, he hasn’t let on.

If the music thing doesn’t work out, Hubbard could ride it out being a greeter and posing for pictures at the Snake Farm. But with a co-writing
credit on country superstar Eric Church’s “Desperate Man”—released this year—plus a cameo in Church’s music video, he’s most likely going to stick with what he knows and keep writing and performing songs—“Snake Farm” included.

“At least it’s not ‘Feelings,’” Hubbard deadpans. “Can you imagine playing ‘Feelings’ for 40 years?”

From the October 2018 issue