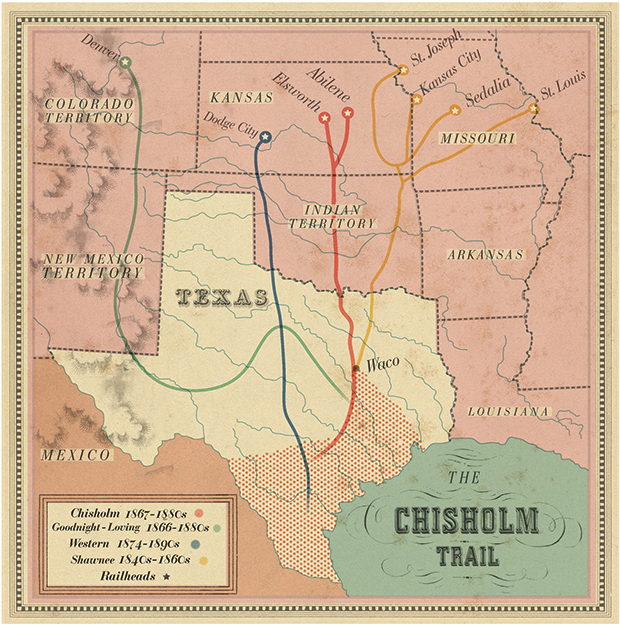 Ever wanted to throw a birthday party for cowboys? This is your year. But be sure to have a cake big enough for 150 candles.

If traversing the Chisholm Trail has upped your hankering for beef, the Texas Beef Council is happy to sate your cravings with these recipes.

Where to hang your hat

To get in the yesteryear spirit, be sure to look for historic stop-offs for accommodation.

Near the Alamo, the Menger Hotel lasted through the Chisholm era and first opened its doors (and bar) to bigwigs in 1859. Over the years it’s welcomed William Sherman and—as a common tale goes—Theodore Roosevelt as he recruited his Rough Riders. The arrival of the railway to San Antonio in 1877 began with a toast from Texas Governor R.H. Hubbard here. Many eras have passed since the Victorian heyday, but the Menger’s held its historic charm—including a richly paneled bar from 1859. Call 210-223-4361.

Dressed up like a super-size, Richardson-Romanesque mansion, The Driskill was a latecomer to the trail and always more a cattle baron than cowhand type of place. Built in 1885 by Jesse Driskill, a cattle rancher made rich from drives heading north, it remains an Austin icon. Lots of fun stuff is going on here and nearby, as it’s set amidst Sixth Street’s music scene. During SXSW, singers play a series of shows in the hotel. Call 512-439-1234.

The simpler Stagecoach Inn is an original, a stop-off on the Chisholm Trail that’s survived as a hotel/lounge since it opened in 1861. Its hotel is presently closed for renovation (due to open next year), but the restaurant reopened last month. Call
254-947-5111.

Propped in the heart of Fort Worth’s cowtown core, the Stockyards Hotel—open since 1907—is the quintessential cattle-traveler stop. From front-facing rooms, you can peek over the passing Longhorns twice daily, then saunter over to Billy Bob’s—the world’s biggest honky tonk. Try to stay in the corner Bonnie & Clyde Suite, with actual artifacts of the couple who stayed here in 1933 (Bonnie’s revolver is cased on the wall). Fake bullet holes playfully puncture the wood shutters. Call 817-625-6427.

To get on the range, Wildcatter Ranch—about 90 miles northwest of town—is a luxury version of the ranch experience, with slick rooms (some with converted chuckwagon beds) and activities including 20 miles of horse trails and skeet shooting. Call 940-549-3500.

Read more of Robert Reid’s journey up the historic path of the Chisholm Trail in the July 2017 issue of Oklahoma Today.

That’s because this is the 150th anniversary, more or less, of the Chisholm Trail. I qualify that because a lot remains uncertain

about this iconic trail that bridged Texas pastures with Kansas railroads. Few agree on where it started or stopped, for instance, or where the name came from, or even if the trail was in Texas at all. But still, this huge Texas exodus of cattle in the 1860s and 1870s changed the Lone Star State for good. And gave birth to the cowboy icon to boot.

It’s a birthday that makes for a particularly rewarding Texas road trip, too.

After the Civil War, Texas was a rough place. The economy was busted, droughts loomed, the railroads hadn’t yet connected the whole state, and returning Confederate soldiers couldn’t find work. But there was no shortage of one thing: Longhorns, which outnumbered Texans six to one. “There seemed no end to these scattered brutes,” wrote Wayne Gard in The Chisholm Trail in 1954. While a Longhorn yielded $4 here, Eastern markets reached via railroads paid 10 times that amount.

But how to get ’em there? Enter the cowboy.

Trail riders faced brutal conditions on the two- to three-month drive: forging rivers, searching for drinking water, reckoning with thunderclaps that sent cattle into stampedes, and paying tolls (or worse) from waiting Kiowa or Osage in Indian Territory.

Finding the best way north also proved difficult. Before the war, a handful of ranchers had led herds to New Orleans and even St. Louis on foot. But once tick-carrying Longhorns introduced less hardy Missouri cattle to “Texas fever” (sometimes called “Mexican fever” in Texas), gangs of Missourians met drovers in firefights, killing cattle (and a fair share of cowhands). The new migration target shifted west—to slightly more welcoming Kansas. In the spring of 1867, Joseph McCoy, an Illinois entrepreneur, set up a train depot in Abilene, Kansas. And the industry boomed, as documented in many Western films like Red River from 1948.

Over the next 15 to 20 years, drovers led millions of Longhorns to Kansas, which built up baron empires in Texas and fueled the adventurous spirit of younger cowhands getting paid a mere $30 to $50 a month.

Following the Chisholm Trail today not only changes how you see Texas’ past, but also its present. Its legacy is found in high-heel cowboy boots, our love for all things beef, ex-cowtowns that rose from the dusty paths, and the barbed wire that ultimately closed off most of the open range for good. Driving the Chisholm Trail is more than just a ride up Interstate-35. The Chisholm Trail 150 website, also lists many options and events this year (including some in Oklahoma and Kansas). Meanwhile, here are the five biggest stop-offs—ordered south to north—that can be experienced any time: 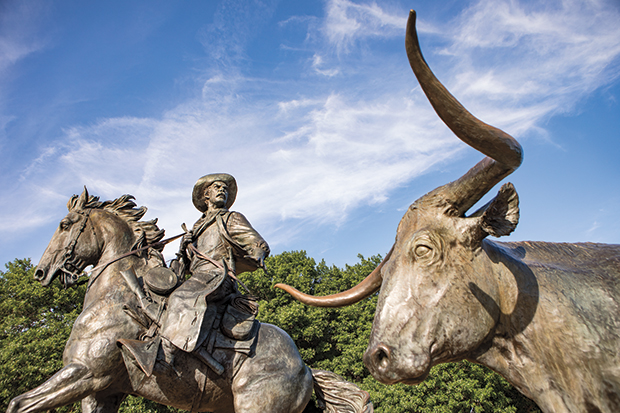 Richard King, the man behind the 825,000-acre King Ranch near Kingsville, deserves his own Hollywood film.

“He was an amazingly tenacious individual,” says Bob Kinnan, the area manager of the Santa Gertrudis Heritage Society. “How he survived so long and established a ranch this size is a remarkable thing. South Texas was a desperate part of the world at the time.”

Born in 1825 in New York, King escaped an unlikely childhood as an indentured servant. As a stowaway, he convinced the ship captain to teach him how to captain boats, then went on to pilot boats for the U.S. Army in the Seminole and Mexican wars before lighting out south of the border to bring back cheap cattle from Mexico to build his own ranch, founded in 1853. (While there, he hired approximately a hundred Mexican vaqueros, called Los Kineños, to teach him the ropes of ranching.) The result is Texas’ largest ranch, now bigger than Rhode Island.

“There was nothing romantic about trailing herds,” Kinnan cautions. “Movies made it romantic.”

You can learn how the road to any great steakhouse begins at a ranch like this. Tours explore the property, while museum exhibits touch on King and the Chisholm Trail. Visitors can also meet some Longhorns along with a special breed developed here on the ranch in the early decades of the 1900s: the Santa Gertrudis, the first beef breed formed in the United States.

Afterward, drive two hours north on “blue highway backroads” to Goliad State Park and Historic Site to visit Texas’ first megaranch at the Mission Espíritu Santo. Opened in 1749, the mission—run by Native Americans mostly—had 40,000 head of cattle by the time of American independence. 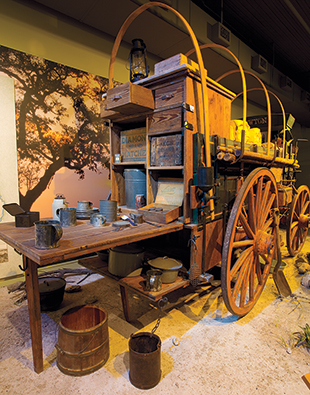 No museum in Texas better explains the reality of riding the Chisholm Trail than Cuero’s Chisholm Trail Heritage Museum. The award-winning museum, open since 2013, is set up near drovers’ set-off points that actually pre-date the trail itself. The site acknowledges the Chisholm Trail’s murky origins with displays on Guadalupe Valley ranching roots that harken back to Spanish times. Other features include a chuckwagon replica and a fun Lead a Trail Drive interactive exhibit where visitors pick cowboys for all of the drive’s key positions, including the lowly wranglers in the dusty back.

Muddy, unruly red waters of the steeply banked Brazos River—named by the Spanish for brazos de dios (or arms of God)—made for one of the biggest obstacles during drives to the Red River. Then Waco changed things. In 1870, the Waco Suspension Bridge opened, making crossing a breeze—well, for a price.

Today the river’s changed. In Waco, you can kayak or canoe the Brazos, or read up on its last wild days in John Graves’ iconic Goodbye to a River, which describes his experience of making a Thoreau-like canoe journey “before they drown it” by dams.

Of course you must walk the bridge. It’s a Waco favorite activity, now punctuated by a riverside series of sculptures of drovers and Longhorns—created by Cleburne artist Robert Summers in 2014—that spill toward it from a riverside park. 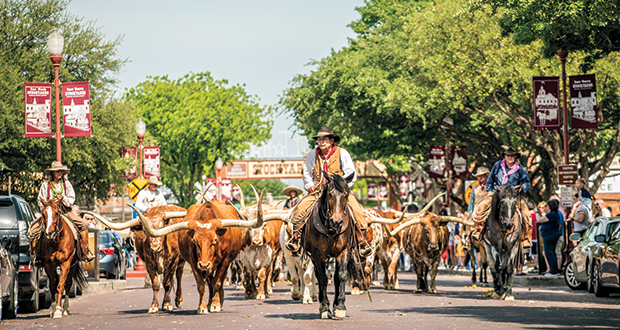 Fort Worth is a popular stop on the Chisholm Trail today (a locally produced musical Spirit of the Trail has been created for the anniversary) and one of the easiest places to see the stars of the historic trail: the Longhorns themselves. A herd of nearly two dozen makes twice daily “cattle drives” in the famed Fort Worth Stockyards National Historic District (at 11:30 a.m. and 4 p.m.), with a “cow camp” to learn more cowboy tricks on weekends at 1:30 p.m.

Kristin Jaworski, who’s from Arizona and grew up with horses and cattle, has been the trail boss here since 2002. She says she “absolutely” considers herself a cowboy and has a lot to say about her Longhorns.

“They’re majestic creatures. Real popular show breed these days,” she says. Picking a favorite is harder for her.

“Well, Rojo is my buddy,” she explains. “I like the underdog too, Matterhorn, who’s new and trying so hard to fit in. And Norman’s actually my steer. He grew up in the petting zoo, and one day they were going to sell him. ‘Too big,’ they said. I said, ‘Like hell you’re selling him.’ I fed him from the bottle when he was young. He’s mine now and spoiled rotten.” 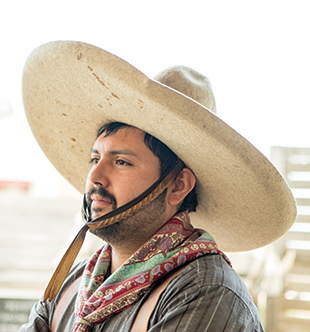 Kristin ensures all parts of the famed cattle drive are accurate, down to the attire.

“We make sure we’re not just the rodeo cowboy you see, a John Wayne cowboy.”

Part of that is respect of the vaquero, or Mexican cowboy who so influenced the American version. In fact, “cowboy” derives directly from the word vaquero. “They’d dress a little flashier,” Kristin notes. “They taught a lot about how to be a cowboy.”

Not all Longhorns are the same. And the ones at Fort Griffin, a state historic site outside of Albany on the former Great Western Trail—a westerly rival to the Chisholm—boasts Texas’ most special group.

With Longhorns dying off in the 1900s, folklorist and author J. Frank Dobie assembled a herd in 1941 as the state’s official herd, which ended up here seven years later. (The herd is now split among four state parks and one state historic site.) Any day, you can come see them and marvel at their horns and color variations that link back to their Andalusian homeland—yellow splashed with white dots, black, and brown.

Longhorns are historic cattle, generally unchanged since their first incarnation grazing in the Andalusian plains of Spain before being introduced to the Southwest in the 1500s. Some say that conquistador Francisco Vázquez de Coronado first introduced Longhorns to present-day Texas in the 1540s. 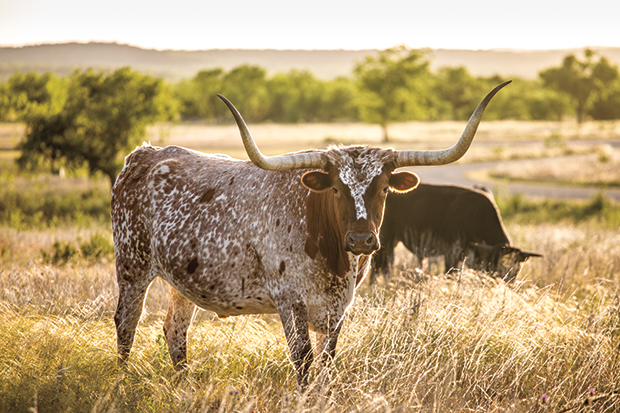 “They’re definitely a breed apart,” says Will Cradduck, herd manager here since 2008. “They have a reputation for being mean. Actually they’re just intelligent. Before the trail, they’d be hunted for beef—and learned quick to run and hide.”

As trailing cattle shifted their route west in the 1870s, Fort Griffin—which also turns 150 this year—became a popular hub for northbound drovers.

Out here it’s still more open-range than what you’ll find on I-35 to the east. Try to time a visit with the fort’s regular dark-sky viewings of the stars. The night sky really pops out here, and telescopes reveal what lit up all those campfire songs 150 years ago.

Robert Reid is National Geographic Traveler’s Digital Nomad and has been in travel publishing for two decades. He grew up in Oklahoma and now lives in Portland, Oregon. Follow him on Instagram at @reidontravel.