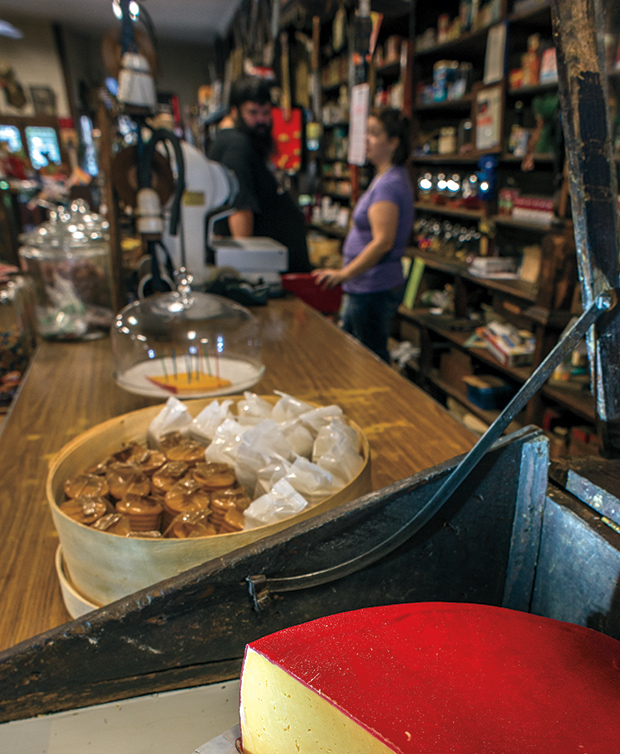 Crackers with Wisconsin cheese? Yes, please. The snack is one of T.C. Lindsey & Co.’s most popular offerings. Part store and part museum, the mercantile has amassed a collection of antiques over the years, such as these novelty canned goods.

Not exactly lost but not exactly in plain sight, the community of Jonesville sits near the Texas-Louisiana border, just as it has since Texas’ earliest days as a state. Visitors will notice the deteriorating wooden structures along the Union Pacific railroad, relics of the area’s cotton-shipping past. But Jonesville refuses to disappear, thanks largely to its only private business—the T.C. Lindsey & Co. General Store, which has operated continuously since 1847.

William Harrison Jones, the town’s namesake, opened the store as a trading post, and it moved to its current site in 1922. At its height at the dawn of the 20th Century, Jonesville was a railroad and cotton hub with a steam-powered gristmill and cotton gin. But over the decades, Jonesville dwindled as cotton farming faded and its residents moved to nearby cities like Marshall and Shreveport. Today, Jonesville has only a few residents, although more than 100 people from the area collect their mail at the U.S. Post Office across the street from T.C. Lindsey & Co.

The aisles of the two-story mercantile exude nostalgia and warmth. For some visitors, the toys on display, such as harmonicas and Radio Flyer wagons, recall childhood. For others, the store’s atmosphere speaks of
small-town America and serves as a remnant of an era lost to time.

“As far as we know, we’re the oldest continuously operating mercantile in the state of Texas,” says Marty Vaughan, co-owner of the store and a great-granddaughter of S.F. Vaughan I, a physician who bought the store in the late 19th Century. S.F. Vaughan’s daughter married T.C. Lindsey, which is how the store got its current name.

“When I was a small child in the ’40s, people could still buy wagons at the store,” she says. “It was like the Wal-Mart of its day, and a lot of people walked maybe four or five miles to the store to buy things. Wagons loaded with cotton stretched for over a mile down the road. People came in to sell their crop and get supplies.”

Some of the store’s once-new inventory items have become historical curiosities over time. Behind the cash register, shelves display antique canned goods and pharmaceuticals like Crazy Water crystals from Mineral Wells and Grandpa’s Pine Tar Toilet Soap. Eye-catching (but not for sale) items in the store include an antique dentist’s chair from Marshall, vintage farming hand tools, a burial tuxedo left over from when the store used to sell caskets, and the last bale of cotton ginned in Jonesville. Stuffed in burlap wrapping, the fluffy white bale was ginned in 1973.

At the back of the store, rocking chairs arranged around a fireplace, welcome visitors to linger. Old family photographs, Longhorn mounts, and road signs adorn the surrounding walls. After the train rattles through town each day, store Manager Jon Miller uses a broomstick to reposition the Longhorns above the fireplace as the vibration causes them to lean. “They used to at least slow down when coming through, but not anymore,” says Miller, S.F. Vaughan’s great-great-grandson.

Adjacent to the fireplace is a framed glass case from 1903 that holds a 20-pound, red-waxed wheel of Wisconsin cheese. It’s just plain Wisconsin cheddar, but people love it. “It’s the atmosphere of the old general store and the 100-year-old cheese slicer that makes the Jonesville cheese special,” Vaughan says.

The store also sells regionally produced jams, jellies, syrups, and pickled vegetables, as well as dozens of soft drink varieties, including specialty brands like Virgil’s Black Cherry Vanilla and Sioux City Sarsaparilla.
A table set in the middle of the store beckons customers to take a seat for a snack of cheese, saltine crackers, and a soft drink.

Syble Elliott is the store’s longest-tenured employee with 59 years under her belt. As customers arrive, she hands buffalo nickels to the kids and directs adults to sign the guestbook, which has entries from guests from as far away as England and South Africa. Elliott is full of stories, and one of her most memorable tales involves a customer who would always find his way to the store after getting drunk. During one of his drunken visits, he passed out on the floor, so the employees carried him to the second floor and placed him in one of the caskets stored there at the time. After he awoke, he never again visited the store drunk.

Gone are Jonesville’s cotton and railroad days, but as long as customers keep walking through T.C. Lindsey & Co. General Store’s screen door, the community’s spirit will remain alive. School groups, church groups, motorcycle clubs, and antique-car clubs are among the visitors who take the short detour off of Interstate 20 to check out T.C. Lindsey’s.

“The store’s the only reason—that and the post office—that people would come here as a destination as opposed to passing through this little community on the way to somewhere else,” Vaughan says. “We get a lot of people stopping to ask questions. We’re supposed to know everything because we’ve been around longer than everybody else.”