Alan Bean, the only artist who has walked on the moon, creates eyewitness accounts of space experiences 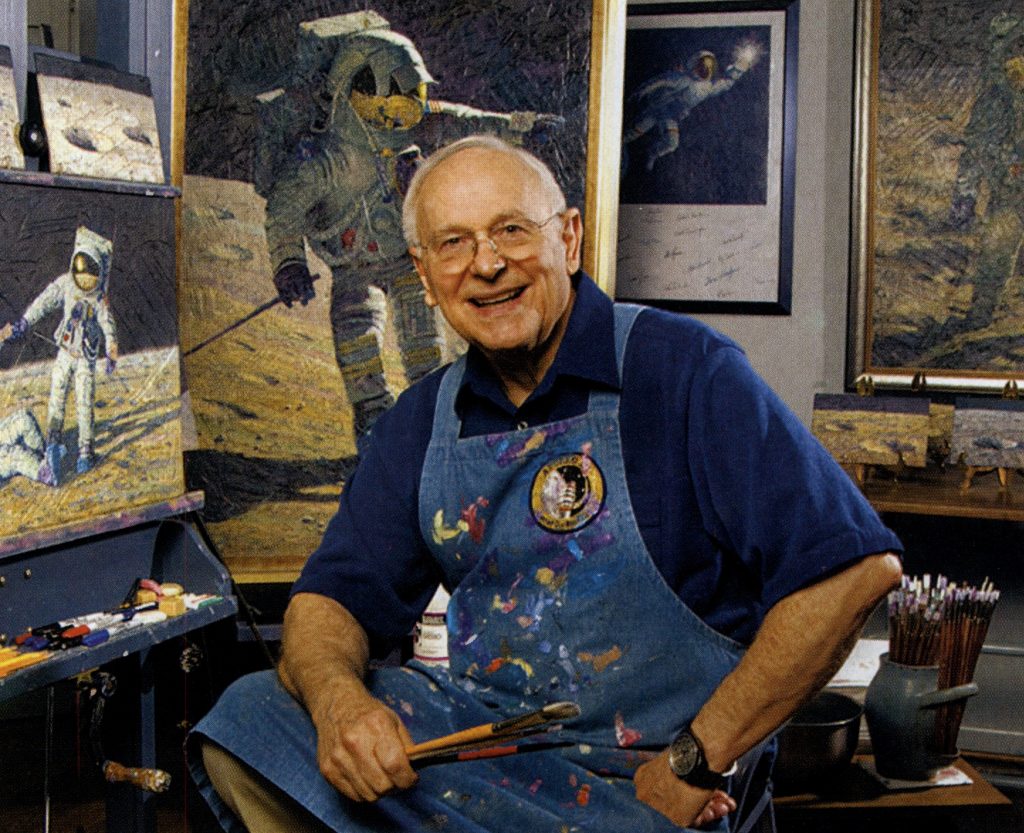 On July 20, 1969, people across the globe watched their televisions in amazement as Apollo 11 landed the Lunar Module on the moon, and Neil Armstrong and Buzz Aldrin took that “giant leap for mankind.” Between 1969 and 1972, 12 astronauts set foot on the moon as part of the Apollo missions for the National Aeronautics and Space Administration (NASA). But of these 12 Americans, only one is a native Texan-Alan Bean.

Born in 1932 in Wheeler, Texas, Alan LaVern Bean grew up with dreams of becoming
a pilot He studied aeronautical engineering at the University of Texas, then served as a U.S. naval aviator and test pilot before being selected through a rigorous process for NASA’s third astronaut group in 1963.

Highlights of Bean’s 18-year career at NASA include serving as the Lunar Module pilot of Apollo 12 in 1969 (he and  Commander Pete Conrad spent almost eight hours on the moon’s surface), and as Spacecraft Commander of Skylab 3, a 59-day, record-setting flight that studied humans in long-term zero gravity, the sun and stars, and the earth itself, from 260 miles up.

But in June 1981, Bean surprised his colleagues and decided to leave NASA to pursue his other passion—painting—and begin a new career as an artist. For the past three decades, by combining the technical mind of an astronaut and the creative imagination of a painter, Bean has captured his memories and those of fellow astronauts with artwork depicting space exploration.

“I gave up a job that I loved, and that I had worked for fundamentally all of my professional life, to do this,” he says. “I was lucky and somehow got this honor to be on the moon, and I felt that this [career change] was the right thing to do. But it was a tough decision because I loved being an astronaut.”

Bean started his new career by taking art classes to learn different techniques and styles. Early on, he painted still lifes and other studies before he began depicting his experiences as an astronaut. “I didn’t realize it at the time,” he says, “but when I became the fourth man to walk on the moon, I also became the first artist to walk on the moon.

“I wanted to leave something behind to show what it was like and what we did. This is what I do now on a daily basis. I paint my experiences, as well as stories that other astronauts have told me, to leave behind when we are gone.”

In the dozens of paintings he has completed, he has captured the moment Neil Armstrong placed the American flag on the moon, images of himself and Pete Conrad looking out into space as they stand on the moon’s surface for the first time, and personal experiences of his fellow astronauts.

As he works on each painting, Bean is meticulous about representing the rough, three-dimensional texture of the moon’s surface. “It has been a journey of discovery learning to paint dirt and make it look good,” he quips.

He paints on airplane plywood instead of canvas because of its sturdy quality, he says. He also incorporates personal objects from past missions. He makes imprints using a model of his moon boots and uses pieces of patches from his suit dirtied with dust from the mission, as well as discarded pieces of foil from the heat shield of the spacecrafts.

Before he begins a painting, he designs a model of each scene to ensure that the lighting angles are the same as they would have been at the time of the mission. Using tools that measure the actual light angles from recorded data of the missions, he paints shadows and highlights with the earth in the background. “The light is brighter up there because the moon does not have an atmosphere like the earth does,” he says. “It is the same white light, but just much brighter. I am very careful to show these things as close as possible to how they were.”

But some of his depictions are created for fun, he says. One of his favorites, a fictional portrayal titled The Fantasy, shows Pete Conrad, Dick Gordon, and Bean on the moon’s surface looking into a camera. Bean painted this image in honor of astronaut and friend Dick Gordon, who remained in lunar orbit aboard the command module, while Conrad and Bean continued to the moon. The painting was originally sold to a collector, but after Conrad’s death in 1999, Bean bought the painting back as a keepsake.

Alan Bean lives in Houston with his wife, Leslie. His art has been featured in numerous exhibitions, including Alan Bean: Painting Apollo, First Artist on Another World at the Smithsonian in Washington, D.C., which celebrated the 40th anniversary of the moon landing. His 2009 book by the same title features 120 of his paintings.