El Paso Has a Fascinating Connection With a Small Himalayan Country 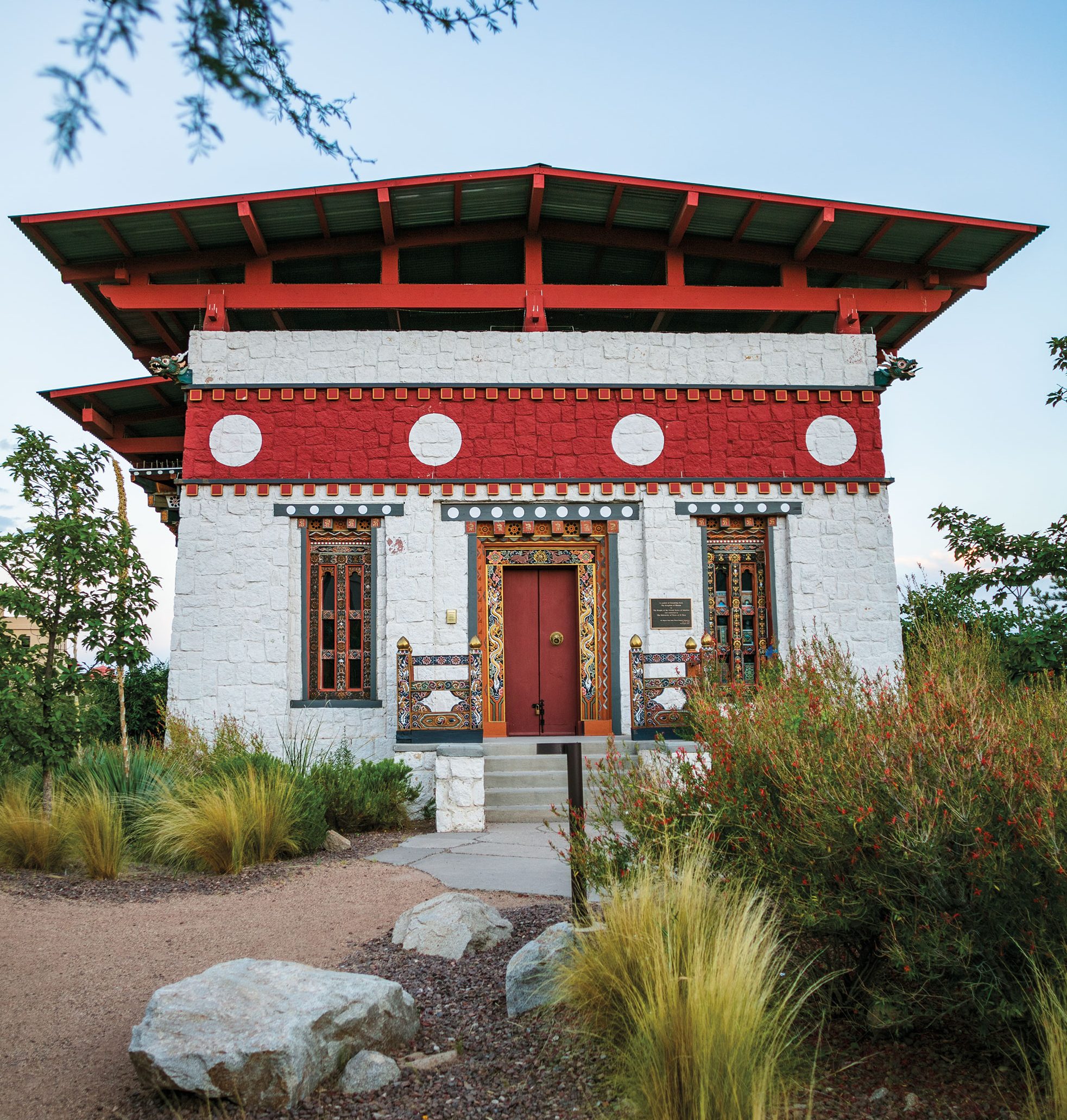 In 1914, National Geographic published an article about the Himalayan kingdom of Bhutan, a remote Buddhist country tucked between India and China. El Paso resident Kathleen Worrell, who was married to the dean of the college that became the University of Texas at El Paso, was intrigued by the photographs of Bhutanese fortresses and monasteries. She also noted a resemblance between the rugged Himalayas and the Franklin Mountains that soar over El Paso. Three years later, as the college’s new campus was being built in the Franklin foothills, Worrell saw an opportunity. She asked her husband: Why not construct those buildings in the Bhutanese style?

More than a century later, her idea is reflected in almost all of the buildings at UTEP. Their sloping walls are accented near the roof with lines of brick and mosaic designs called mandalas—Sanskrit for “circles.” The roofs themselves extend far over the edges of the buildings. Even the parking garages follow the style: Bands of dark-red brick run along the top of their cream-colored walls, and the stairwell towers are capped with cantilevered red roofs.

A deeper relationship between UTEP and Bhutan was forged in the late 1960s, when Dale Walker, editor of the university magazine, then called NOVA, started corresponding with the queen of Bhutan about the school’s Bhutanese architecture. These letters appear to have introduced the Bhutanese royal family to the fact that UTEP was styled after Bhutanese public buildings. The first student from Bhutan enrolled at UTEP a few years later.

This connection was elevated when former university President Diana Natalicio took office in 1988. Natalicio began traveling to Bhutan and inviting Bhutanese performers and artists to El Paso. In 2008, as part of the university’s Bhutan Festival, members of the Bhutanese royal family visited El Paso. “Your connections with Bhutan are not just the oldest in the United States,” Prince Jigyel Ugyen Wangchuck told an audience of several thousand, “they are among the oldest in the world.” 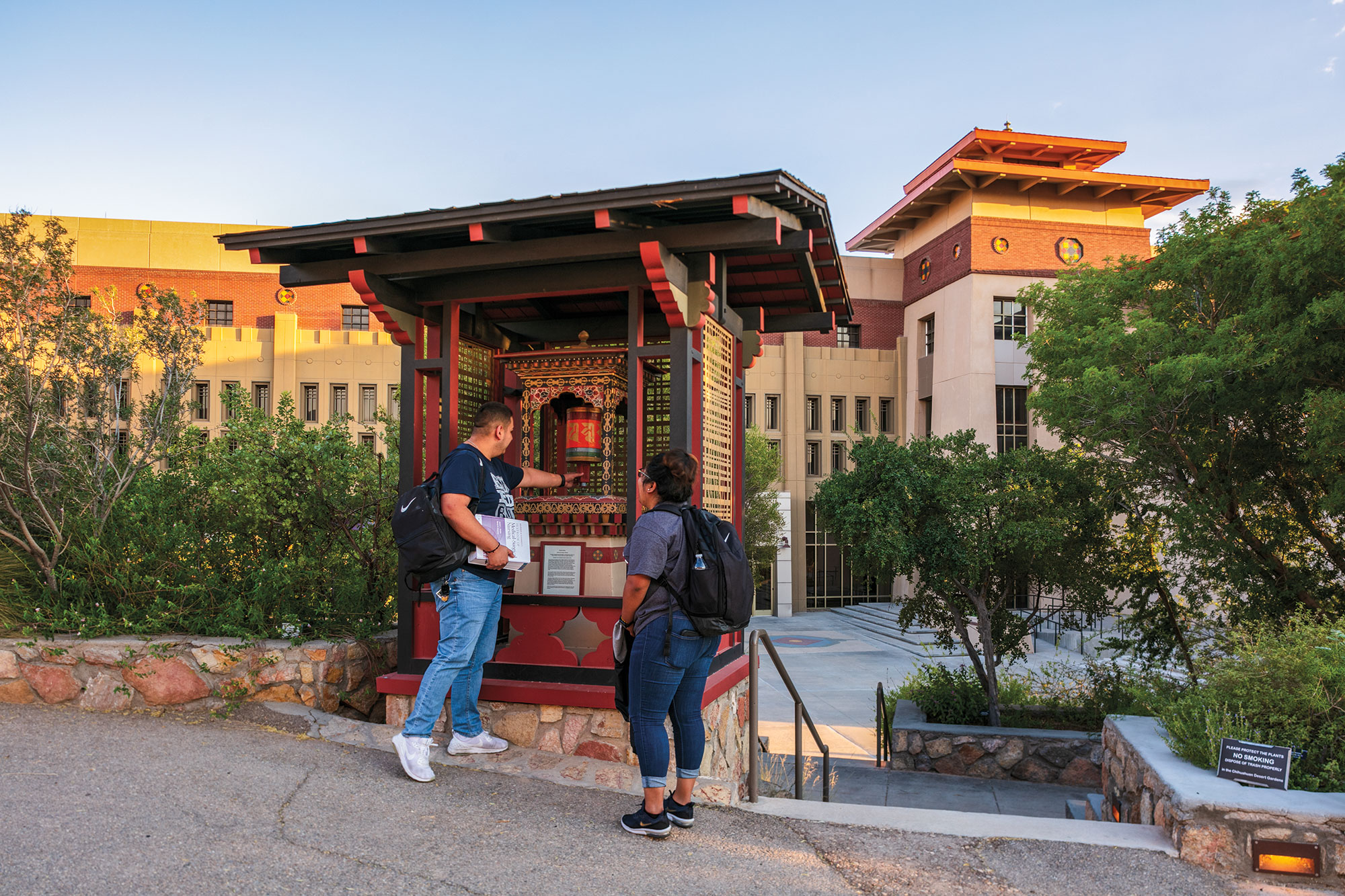 Today, the university enrolls around 40 Bhutanese students. Most return to Bhutan after graduation out of a desire to see their country advance. The former monarchy has recently transitioned to democracy and, since the 1970s, has prioritized “gross national happiness,” a philosophy that balances economic growth with environmental and cultural preservation. Still, most of its citizens work in agriculture, and television and the internet have only been allowed since 1999.

College life in bustling El Paso, which has close to the same population as Bhutan (roughly 700,000), is a dramatic change for students like accounting major Chimi Wangchuk. Wangchuk grew up enthralled by American movies and learned about UTEP from another Bhutanese student. When he decided to attend college in the U.S., he’d envisioned a modern American campus.

At UTEP, he was initially disappointed to see buildings that looked exactly like his high school. But he realized UTEP’s familiar architecture was accompanied by a critical mass of Bhutanese students, as well as American students who likely could find Bhutan on a map and were curious about it.

“El Paso and UTEP are a second home, thousands of miles away from home,” he says. “It’s exactly the same—how people value family, and they really value their culture. It’s just a different environment.” 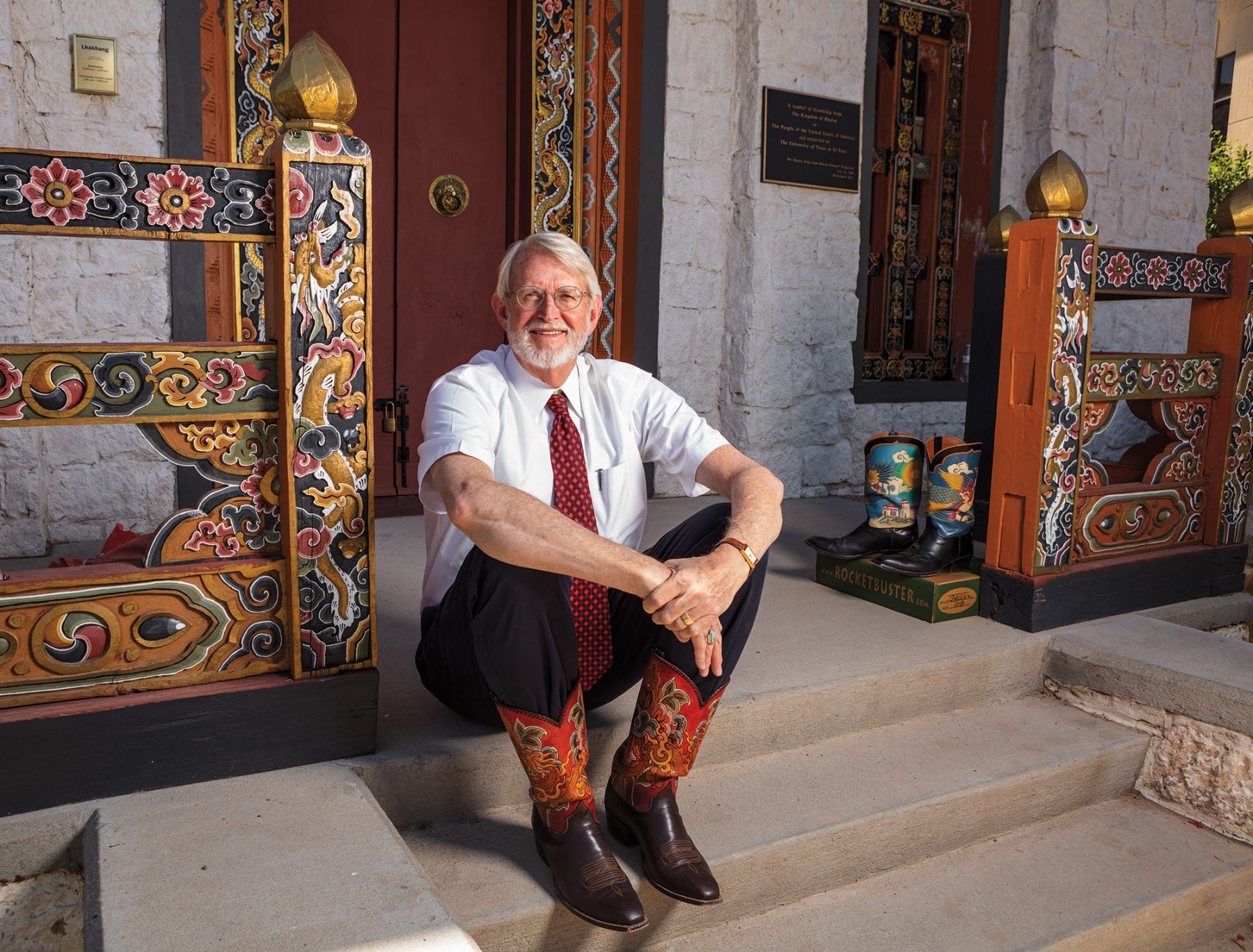 Visitors to UTEP can experience the Bhutanese influence at the Lhakhang, a small building in the center of campus in the style of a Bhutanese Buddhist temple. The Lhakhang is a cultural artifact rather than a religious space. The interior is, like Bhutanese temples, covered in intricate paintings that tell the life story of the Buddha and of Guru Rinpoche, who introduced Vajrayana Buddhism to Bhutan in the eighth century. The structure was a gift to the U.S. from the kingdom of Bhutan and was first assembled by Bhutanese craftsmen on the National Mall in Washington, D.C., for the 2008 Smithsonian Folklife Festival. It was later rebuilt at the center of UTEP’s campus with the help of a Bhutanese architect, a carver, a painter, and a carpenter.

Behind the Centennial Museum, near the Lhakhang, visitors can spin a Bhutanese Buddhist prayer wheel, a metal cylinder containing rolls of thin paper printed with sacred texts. Each clockwise spin is the equivalent of reading the prayers. The University Library contains more artifacts, including a bow and arrow, alongside a brightly painted target, to represent Bhutan’s national sport of archery. 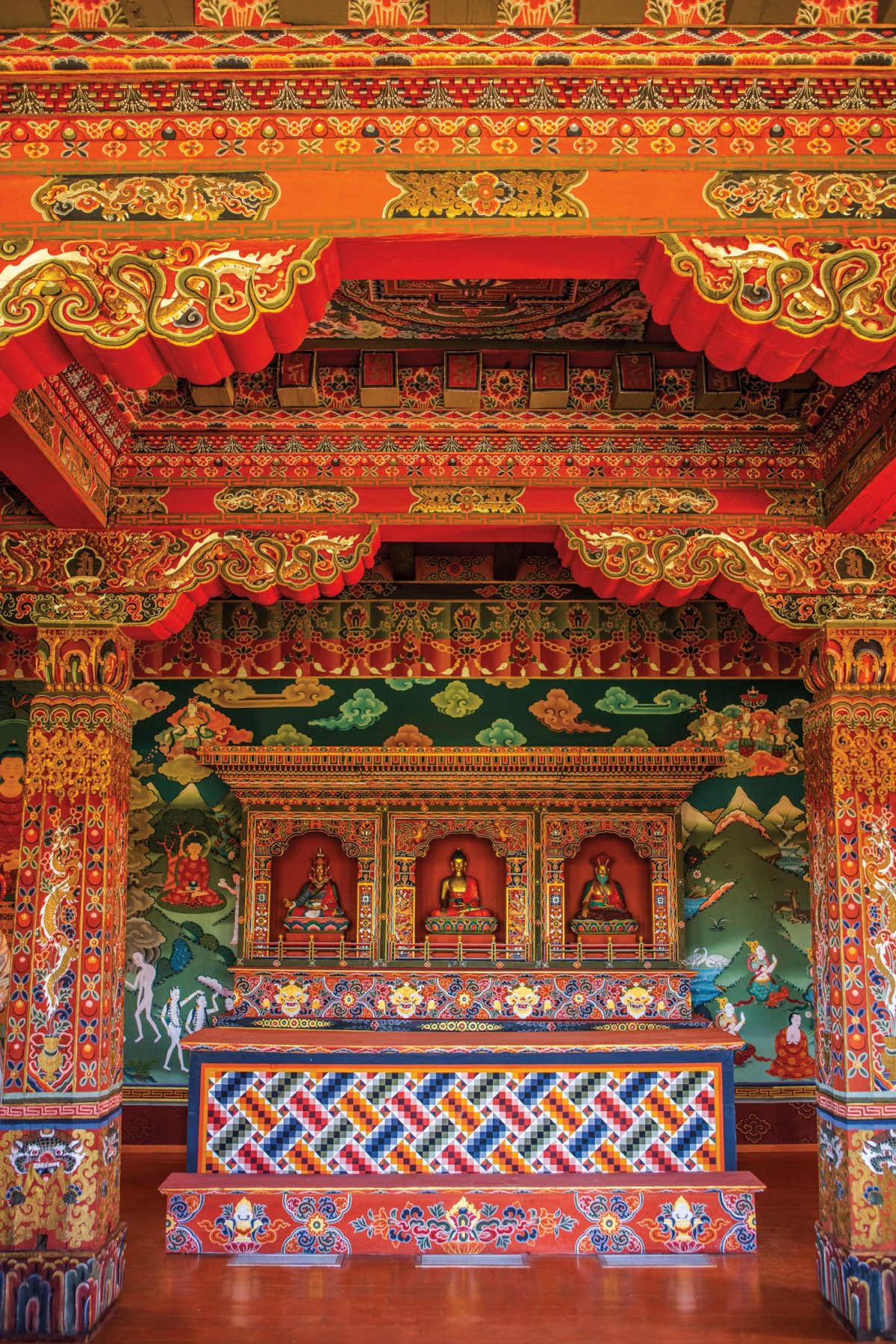 In the library’s atrium, an intricately carved Bhutanese altar sits beneath a giant, rainbow-colored tapestry called “The Four Harmonious Friends.” Based on a Bhutanese folktale about cooperation, it depicts an elephant with a monkey, a rabbit, and a bird balanced like a tower of acrobats on its back. The story explains how the animals combine their talents to plant and cultivate a tree, and when the tree bears fruit, they work together to ensure everyone can reach it.

These objects and the campus buildings constitute one of the largest concentrations of Bhutanese artistic expression outside Bhutan. They make El Paso, already a portal between two countries, a gateway to a much more distant land at a key moment in that country’s development. As Bhutan transforms, visitors to the UTEP campus can learn about what made it special in the first place.

University of Texas at El Paso

The Lhakhang is open to the public the first Sunday of the month from 1 p.m. to 3 p.m. and Wednesdays from 11 a.m. to 1 p.m.
The library is open most days.