Milton Brown, Bob Wills, and the Fort Worth Origins of One of Texas’ Most Beloved Musical Styles 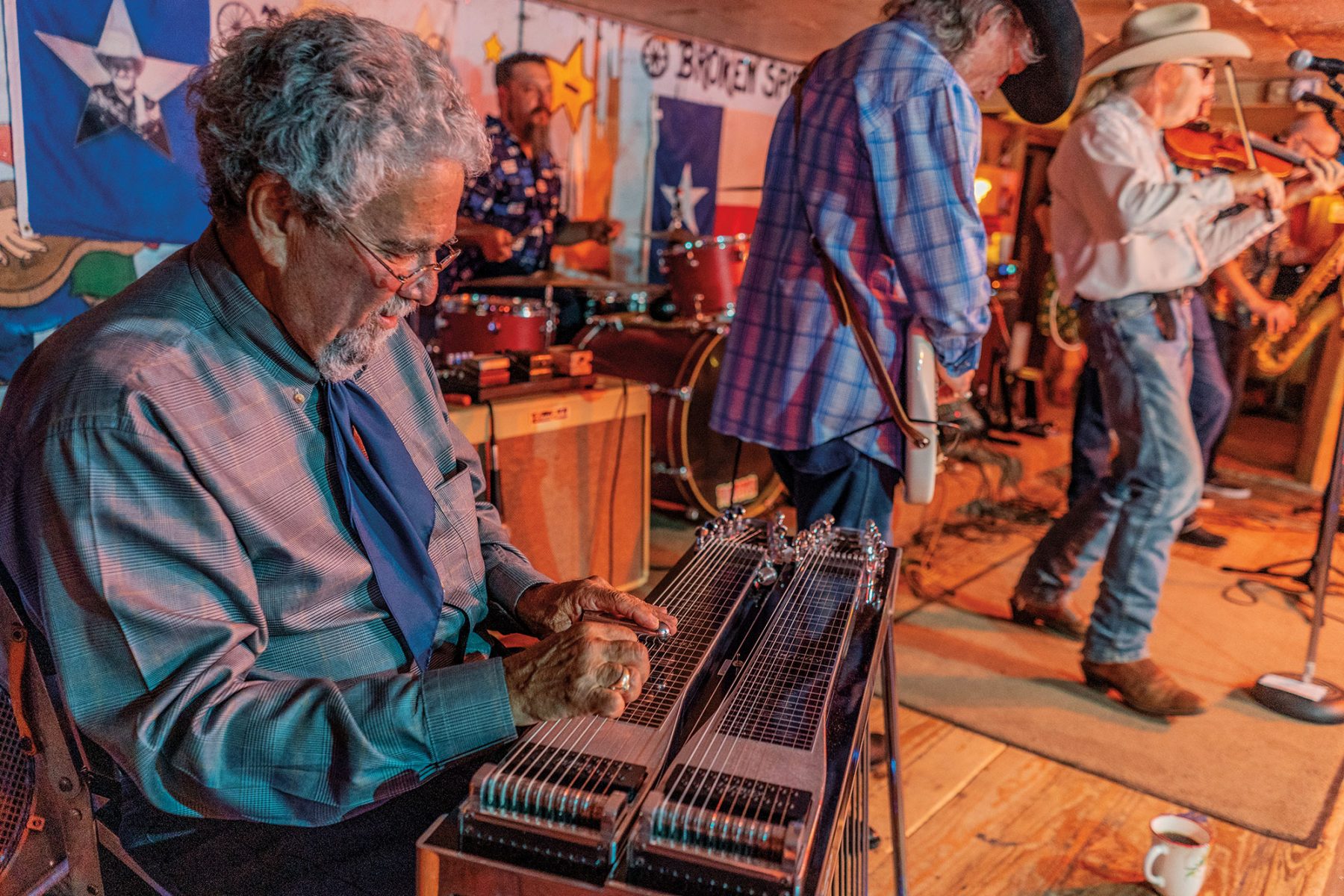 Western swing was born about 4 miles southwest of downtown Fort Worth at the Crystal Springs Dance Pavilion, although you wouldn’t know it when driving past the now-empty lot near the West Fork of the Trinity River. In the early 1930s, the cavernous pavilion drew hundreds for the “hillbilly jazz” of Milton Brown and His Musical Brownies. While the venue burned down in 1966, Western swing is still going strong—a style that’s among the most recognizable roots of Texas music.

Bob Wills famously earned the “King of Western Swing” tag over four decades of dance hall-filling dominance with his band, the Texas Playboys. But the true innovator was Brown and his band, the Musical Brownies, who developed the prototype sound of Western swing in 1932. Four years later, the singer/bandleader would be dead, and Wills would carry the torch with his trademark “Ah-ha!” holler.

“Western swing was invented for its danceability,” says Jason Roberts, who leads the modern-day Texas Playboys. “But I think it’s also the classic songs that endure. The big three are probably ‘San Antonio Rose,’ ‘Faded Love,’ and ‘Maiden’s Prayer,’ plus you’ve got all those great songs Cindy Walker [of Mexia] wrote like ‘Bubbles in My Beer.’ You’ll hear some blues, jazz, country, polka, and pop music when you go to a Western swing show.”

Born in 1903, Brown grew up in Stephenville with a fiddle whiz as his pop. But the younger Brown was a singer, not a fiddle player. Back then, house party bands typically featured a fiddler and a guitarist mostly playing instrumental tunes. If there were vocals in fiddle music, they were country-raw, from the backwoods. Brown’s vocals were smooth, from the ballroom, with a sense of swing. Wills grew up in Turkey and made his name playing fiddle.

“Western swing was invented for its danceability… You’ll hear some blues, jazz, country, polka, and pop music when you go to a Western swing show.”

In 1930, the formidable pair met at a house party in Fort Worth, the home of WBAP and its Barn Dance program, which began broadcasting in 1923 (two years before WSM’s Grand Ole Opry in Nashville). Brown and Wills joined forces in a band that would come to be called the Light Crust Doughboys, a name taken from the sponsor of their daily radio show, Burrus Mill and Elevator
Co., which made Light Crust Flour. The band honed its sound in real time, performing live over the airwaves, day after day.

From the Barn to the Ballroom

As the Light Crust Doughboys grew more popular, Burrus Mill’s general sales manager, the infamous W. Lee “Pappy” O’Daniel, who would go on to become governor of Texas, forbid the band to play dances. Brown, who was already at odds with O’Daniel over pay, left in protest and started putting together the Musical Brownies.

Brown’s smooth vocals brought the city to the country, and with the addition of pianist Fred “Papa” Calhoun, the Brownies converted the string band into a dance outfit, mixing the previously disparate styles of jazz, country, blues, and pop to fill the floors. The 2/4 “Milton Brown Beat” revolved around the mighty strike hand of tenor banjoist Ocie Stockard, who was followed closely by stand-up bassist Wanna Coffman and Milton’s little brother Derwood Brown on rhythm guitar. Fiddler Jesse Ashlock handled the melody. 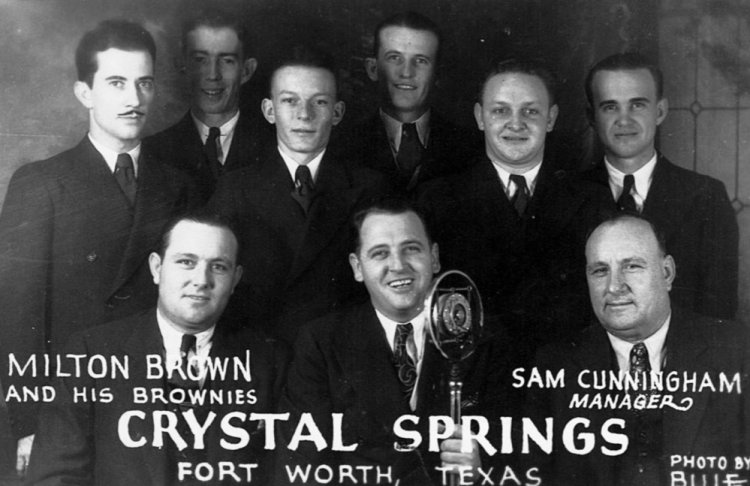 In Cary Ginell’s 1994 biography Milton Brown and the Founding of Western Swing, Calhoun recalled being dragged out to Crystal Springs on a snowy Thursday night in late ’32 and being impressed by the turnout of hundreds for Milton and the boys. Nobody played keyboards with string bands back then, but Milton took the cover off of the house piano and called Calhoun up to sit in on “Nobody’s Sweetheart.” The pianist jammed for the entire set, and during intermission, Brown asked him to join the band.

They had found something special, but Brown was not done assembling his dream lineup. He hired classically trained Cecil Brower to play twin fiddle—a new concept—with Ashlock at first, then Cliff Bruner. In late ’34 came steel guitar genius Bob Dunn, who started off as a Hawaiian-style player, then found greater satisfaction emulating the sliding trombone of Vernon’s Jack Teagarden. 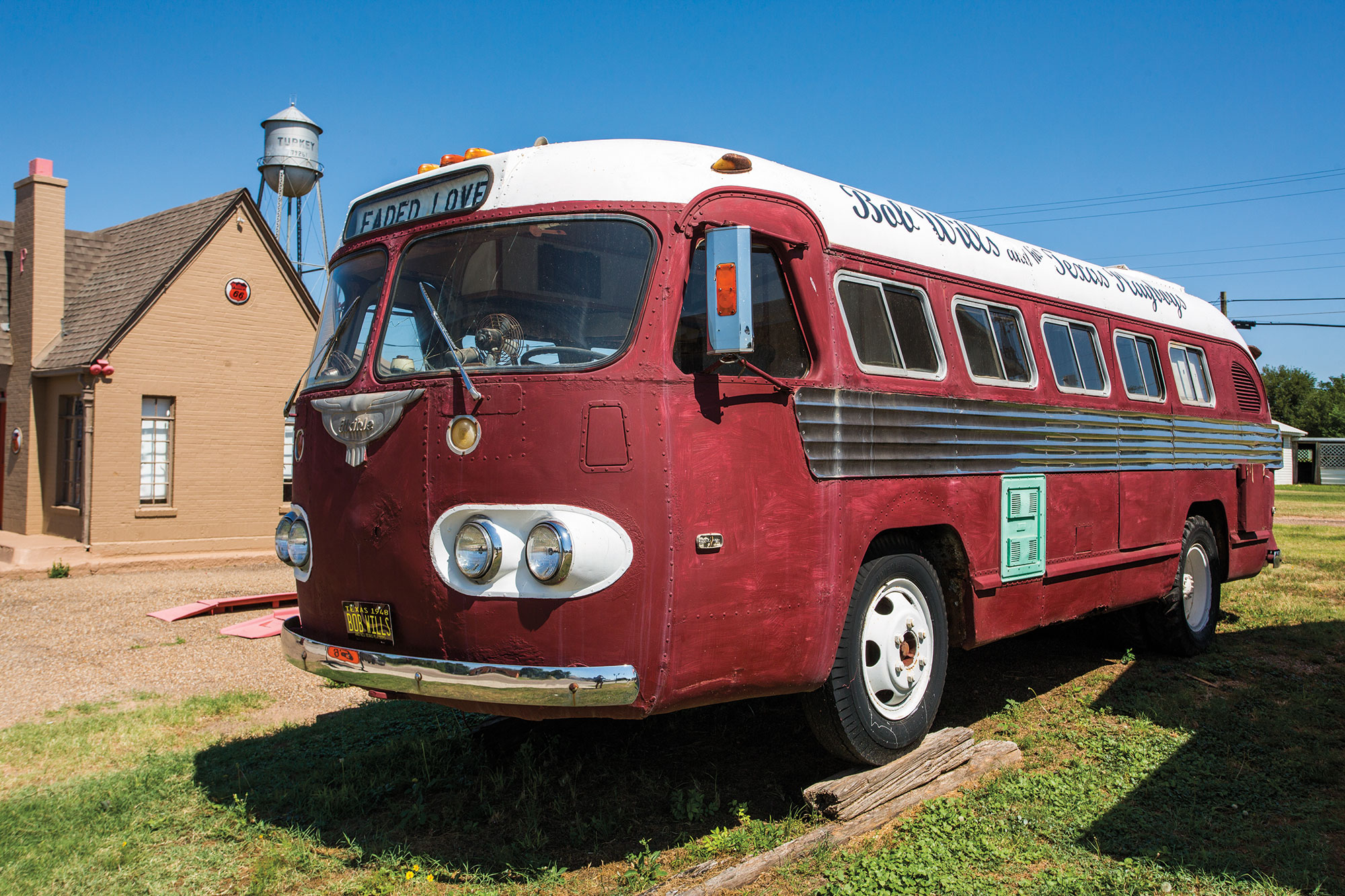 Everybody wanted that swing, pioneered in the 1920s by bands like the Fletcher Henderson Orchestra, with Louis Armstrong’s trumpet peppering the beat. Jazz-minded rural musicians wanted to play “that hokum,” too, and the Musical Brownies showed that Texas audiences also wanted to dance to it. The old Texas dance halls, built by Czech and German immigrants in the years between the Civil War and World War I, were ready-made for this exciting new string-band swing. The venues were so cavernous that bands had to use more instrumentation, because if there’s a word to describe what makes Texas music special, it’s dancing. The beat had to break through the chatter to give a template of movement to dancers on the floor.

Brown’s band was the first to play a jazz/pop repertoire with country music instrumentation, but Wills went bigger,
adding drummer Smokey Dacus in 1935, then a horn section soon after. Wills and his 13-piece orchestra, with Tommy Duncan on vocals, filled every square inch of air in the enormous dance halls and ballrooms of Texas and Oklahoma, eventually outdrawing Tommy Dorsey and Harry James.

“Bob Wills taught me how to be a bandleader and how to be a star,” Willie Nelson wrote in 1988 in Willie: An Autobiography. “He would hit the bandstand at 8 p.m. and stay for four hours without a break. One song would end, he’d count four and hit another one.”

Keep the people moving and dancing. It was a formula later followed by bands like Bruner’s Texas Wanderers and the Blue Ridge Playboys, both from Houston, and San Antonio’s Adolph Hofner and the Pearl Wranglers.

“Although I never had the pleasure of knowing Milton Brown, he and his band were my big inspiration,” Hofner told an interviewer. “They played jazz then, the same as New Orleans jazz, but without the horns. They did it with strings.”

So why did Bob Wills get the credit as the “King of Western Swing?” Because Brown died just as Western swing was taking off. In April 1936, he crashed his new Pontiac Silver Streak into a telephone pole on the Jacksboro Highway near the Avalon Motel (still operational). He was only 32. His passenger, 16-year-old Katy Prehoditch, was also killed in the crash.

Brown and Wills worked together less than two years before splitting ways and forming separate bands. Both kept adding instruments and improvisation, and a Texas tradition was born—one carried on by popular bands like Asleep at the Wheel, Billy Mata and the Texas Tradition, Jody Nix and the Texas Cowboys, Hot Club of Cowtown, and The Western Flyers.

Sometimes what you go out and accomplish on your own surpasses the benefits of collaboration. Brown was the Thomas Edison of Western swing, and yet, perhaps because he was a singer and not an instrumentalist, he’s not widely known for his mammoth musical innovations. But Wills went to his grave in 1975 knowing that, at least in the beginning, his Texas Playboys followed what the Musical Brownies were laying down. Still, if the Texas Playboys hadn’t been so good, we likely wouldn’t be listening to Western swing and honoring Brown’s musical legacy to this day.

Western swing lives on in Texas dance halls and honky-tonks, as well as at celebrations and museums across the state.

Turkey celebrates its hometown boy with Bob Wills Day on the last Saturday of each April with performances by Western swing bands. The Bob Wills Museum showcases Wills memorabilia, and the old Texas Playboys tour bus is parked downtown.
bobwillsday.com

Nov. 1-2, Greenville hosts the annual Bob Wills Fiddle Festival & Contest. Performers this year include Bob Wills’ Texas Playboys under the direction of Jason Roberts, Jody Nix and the Texas Cowboys, and Riders in the Sky.
bobwillsfiddlefest.com

Cowtown Birthplace of Western Swing in Fort Worth celebrates the 90th anniversary of Western swing with a music festival in November 2020 at the Historic National Hall. The group is raising funds to build a Western swing museum.
birthplaceofwesternswing.com

The Heart of Texas Country Music Museum in Brady celebrates the history of Western swing, as well as all country music from Texas, with artifacts such as a stage suit worn by Jim Reeves and Kitty Wells’ gingham dress.
hillbillyhits.com

In Austin, the Broken Spoke—where Wills played in 1966—has a mini-museum celebrating classic Western swing, along with live honky-tonk music most nights.
brokenspokeaustintx.net