Bellows in the Blood 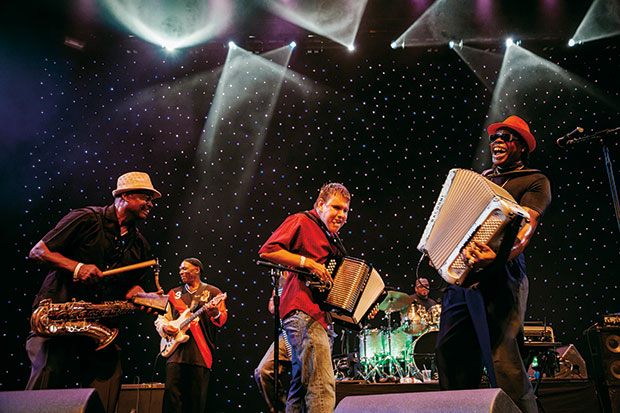 Randall Jackson planted himself in the center of the dance floor and focused on the stage. The 21-year-old watched closely as zydeco stalwart C.J. Chenier pumped his squeezebox through a searing set of bluesy zydeco classics. The melodies surged naturally from C.J., who honed his craft at the side of his late father Clifton Chenier, “The King of Zydeco.” Amid the churning swirl of dancers, there stood Jackson, taking it all in.

“I like to watch other zydeco musicians, to see how their arms move, how they pump the accordion,” says Jackson, who leads a Houston band called R.J. and Zydeco Smoove. “I was watching how he interacts with the crowd and the different styles and genres of zydeco he plays, the different influences, how he puts on a show.”

The annual Accordion Kings and Queens Concert is designed to foster just this kind of musical interchange. Taking place June 6 this year at Miller Outdoor Theatre in Houston’s Hermann Park, the concert is all about preserving and growing regional accordion music in Texas by showcasing a range of accordion styles with deep roots in the state, played by both veterans and up-and-comers. Headliners over the concert’s 25-year run have included the late Esteban Jordan, Flaco Jiménez, the Vrazels Polka Band, Brave Combo, and Step Rideau, to name a few. For the 26th edition, the headliners include San Antonio conjunto band Los Texmaniacs with members of Los Super Seven; Crosby zydeco band Jerome Batiste & The ZydeKo Players; and Austin country-western swing band Debra Peters & the Love Saints.

“These genres may not have the visibility that country-western does, but on the ground they are being lived,” Ballí adds, noting that you can find regional accordion music across Texas, from backyard conjunto dances in the Rio Grande Valley to polka at church picnics in Moravia and zydeco trail rides in Beaumont. “There are dances every weekend. And that’s what keeps Texas unique and special. This vernacular music is not dying.”

While the bands differ from year to year, the Accordion Kings and Queens Concert typically features the Latino styles of conjunto, Tejano, and Norteño; the polkas and waltzes of Texas German, Czech, and Polish bands; the Louisiana border sounds of zydeco and Cajun; and the Texas twang of western swing.

“People talk about Houston being a melting pot,” says Joe Nick Patoski, the veteran Texas music journalist who has served as the concert’s master of ceremonies for the past decade. “This is one of the few events where you can hear it—you can hear what a melting pot sounds like, and it’s really cool.”

Accordion Kings and Queens also serves as the culmination of Texas Folklife’s annual Big Squeeze competition, a statewide contest for accordionists age 21 and younger. The winners in the categories of conjunto, polka, and Cajun/zydeco are invited to perform at the Houston concert, giving them a chance to hone their showmanship, spread their name among music fans, and develop industry contacts.

Launched in 2007, the Big Squeeze contest starts each February with tryouts in towns with a tradition of accordion music, including La Joya, Corpus Christi, Los Fresnos, San Antonio, Schulenburg, Houston, Dallas, and Nederland. The tryouts themselves are entertaining performances, as the budding musicians take the stage to conquer their fears and showcase their skills, with local accordion bands rounding out the show.

The concert is all about preserving and growing regional accordion music in Texas by showcasing a range of accordion styles with deep roots in the state, played by both veterans and up-and-comers.

Over the nine years of the competition, about 240 accordion players have participated, most of them from the conjunto tradition, Ballí says. Last year, Texas Folklife split the contest into three championship categories—conjunto, Cajun/zydeco, and polka—to encourage more participation from Cajun, zydeco, and polka players. The winner in each category receives a prize package valued at more than $4,000, including cash, a Hohner accordion, and professional development help, such as publicity and performance opportunities.

“What we have discovered in seeking out the best young Texas accordion players is that a larger emphasis needs to be placed on certain accordion traditions,” Ballí says. “In particular, we are focusing on zydeco and polka at several of the showcase events and developing more ways to safeguard their important place in Texas music.”

The accordion first set down roots in Texas in the 19th Century, when Germans brought the instrument with them from the Old World. Tejano musicians of South Texas picked up the squeezebox and incorporated it into their dances, creating a style that took shape as conjunto, a party music generally comprised of a diatonic accordion, the bajo sexto 12-string bass guitar, and sometimes drums. Across the Rio Grande in northern Mexico, musicians developed Norteño, a style that’s popular in Texas and characterized by accordion ballads.

Meanwhile, German-Texan musicians joined forces with accordion-toting Slavic immigrants, including Czechs from the provinces of Bohemia and Moravia. These bands flourished in South-Central Texas, often comprising full orchestras of string and brass instruments, drums, and accordion. In Louisiana and East Texas, accordion defined the sound of Cajun folk music, descended from French-Acadian ancestry. When the African-American population mixed Cajun sounds with their rhythm-and-blues, the accordion-tinged strains of zydeco emerged.

“There’s just something about zydeco that makes me want to play all the time,” reflects Jackson, who won the Big Squeeze’s zydeco contest in 2014. “I also want to see Creole culture and zydeco just blow up. Of course it’s already big, but I want to see it progress. And zydeco is one of the ways of doing my part to keep Creole culture alive.”

The winner of the inaugural Big Squeeze contest in 2007, Juan Longoria Jr., of Brownsville, performed at last year’s Accordion Kings and Queens Concert with his band Conteño, which also features his brother Federico on vocals and bajo sexto. To Longoria, the Big Squeeze and Accordion Kings and Queens have generated welcome exposure for young accordion players and a network of accordionist peers around the state. 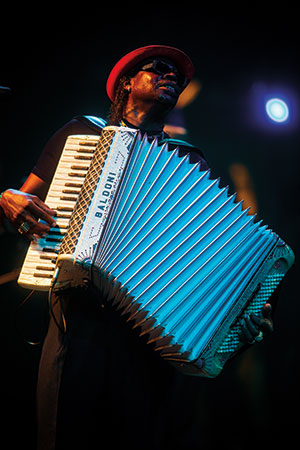 “You meet people who all care about the same purpose—they love the accordion and the culture around it,” says Longoria, who also does his part to further accordion music as the founder and instructor of an accordion class at Los Fresnos High School. “I think the contest is a huge benefit for the music itself, regardless of whether it’s conjunto, Tejano, or Cajun. It helps out a lot of teens here in Texas.”

At Miller Theatre, the dividing lines between the various styles of accordion music blur as the concert advances into the night. It’s not unusual for the bands to invite accordionists from other genres on stage for jam sessions. Last year, conjunto virtuoso Juanito Castillo brought the house down when C.J. Chenier called him on stage for a blistering medley. By the end of the evening, the wooden dance floor of Miller Theatre’s orchestra pit is no longer the domain of specific ethnic dance steps: It holds an energetic, simmering blend of dancers and movement.

Meanwhile, Miller Theatre’s sloped lawn, situated on a hill behind the covered seating, provides a grassy refuge for families and spectators stretched out with blankets and lawn chairs. They snack on picnics and concessions, and watch the day’s light fade over the twinkling, ultra-modern skyscrapers of Houston’s Medical Center.

“The centerpiece of this is the accordion, of all things,” Patoski marvels, “a much-maligned, misunderstood instrument. And yet here tonight it serves five different cultures. You won’t see this anywhere else.”