The Texas-Czech culture of Fayette County 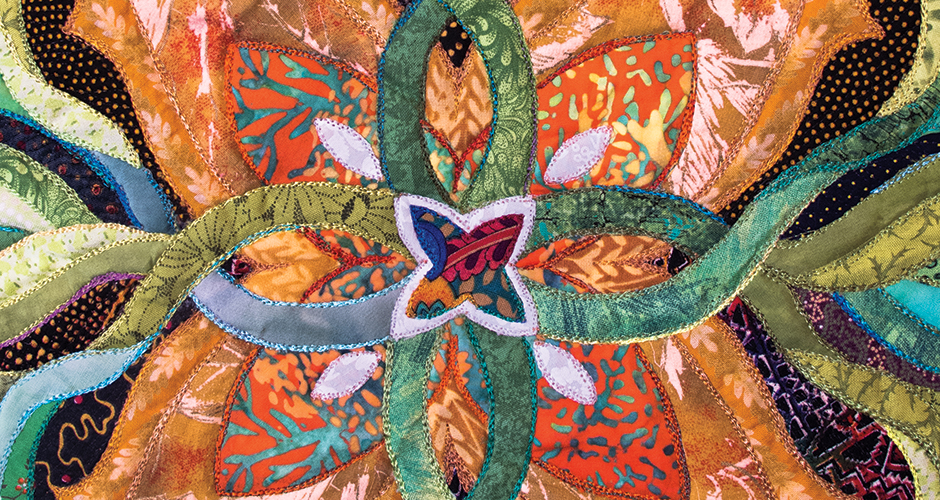 There are many treasures at the Texas Quilt Museum in La Grange. (Photo by J. Griffis Smith)

Who needs to get on an airplane to dance with a foreign culture? Between Houston and Austin, a 90-minute drive from each, is Fayette County, “the cradle of Czech immigration.” In the 19th century, Czech immigrants settled in pockets around Texas—just follow the kolaches—but the concentration of new arrivals in Fayette County created a rich Czech tradition that persists today in the region’s music, food, and culture.

Fleeing persecution in their homeland, a pioneering group of 16 families from Bohemia landed in Galveston in 1852 and made their way to Central Texas, according to the Texas Almanac. By the Civil War, about 700 Czechs called the region’s rich farmland home.

Predominantly Catholic, the Czechs settled in such Fayette County towns as La Grange, Fayetteville, Schulenburg, Dubina, Moulton, Hostyn, and Praha. They brought polka, kolaches, and dumplings—music and food that reminded them of home. But at the same time, these Czechs, along with their German and Polish neighbors, became Texas pioneers, working the fields, raising livestock, and mixing country music into their Saturday night polka dances. Unlike other immigrant groups, they didn’t migrate to the cities in great numbers.

The Texas-Czechs built community centers with dance floors and stages, including the first SPJST hall, built in 1887 in Fayetteville. Although people joke that SPJST stands for “Some People Just Sit There,” the letters come from the Czech words for “Slovanic Benevolent Order of the State of Texas.” There are now 103 SPJST lodges in Texas (offering insurance and other financial services for members) but the original—SPJST Lodge No. 1—remains in downtown Fayetteville, opening occasionally as a meeting hall and event venue.

Fayette County has 30 vintage dance halls that are still standing, more than any other county in Texas, says Steve Dean, co-founder of Texas Dancehall Preservation Inc. “Texas has a cultural identity all its own—the music, the food, the dancing. And it all grew out of the dance halls,” Dean says. “The people of Fayette County dance differently. They still do the traditional steps.” 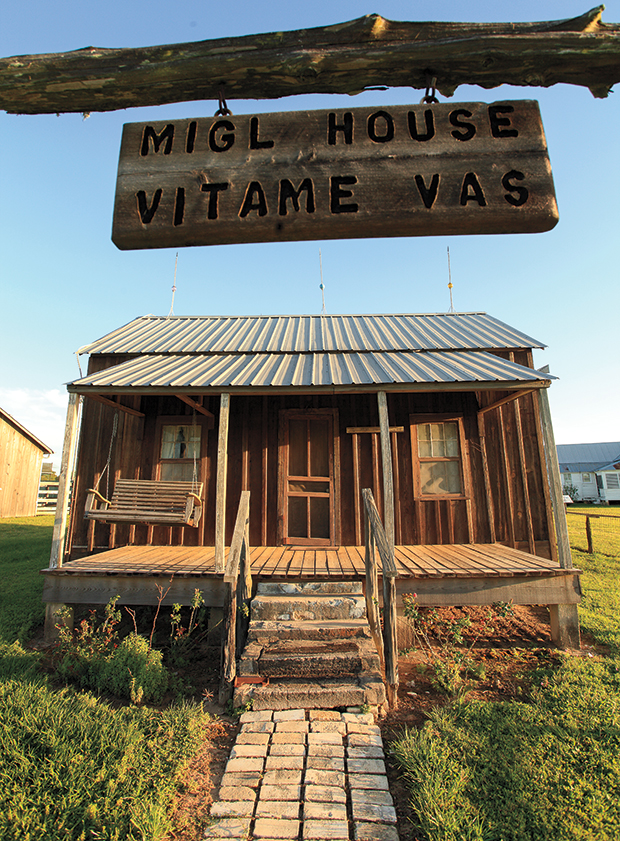 Migl House at the Texas Czech Heritage and Cultural Center.

The Czech pioneers also erected churches modeled after European cathedrals, with elaborately painted walls and opulent altars. More than 20 “painted churches” were built throughout the region, including striking examples in Praha (St. Mary’s Church of the Assumption, 1895), Dubina (Sts. Cyril and Methodius Catholic Church, 1912), Ammannsville (St. John the Baptist Catholic Church, 1918), and High Hill (St. Mary Catholic Church, 1906). The churches keep their doors open during the day, so anyone can visit.

In the summer, the churches host their annual picnics, which serve as reunions and community fairs. Besides feasts of fried chicken, sausage, and beef stew, the church picnics feature morning Masses in native Czech, livestock shows, amusements such as miniature train rides for the kids, and polka bands and dancing.

May and October are always big in Fayette County, with various Maifest and Oktoberfest blowouts. The Texas Czech Heritage and Cultural Center near the Fayette County Fairgrounds hosts the Slavnost celebration May 19-21 and the Heritage Fest & Muziky on the third weekend in October (October 20-21, 2017). I attended last year’s Heritage Fest and received a full serving of Czech culture in two hours. Polka dancing? Czech. Chicken and dumplings, plus kolaches? Czech. Vintage tractor display? Czech. All this unfolded to the sounds of the Shiner Hobo Band pumping out the oom-pah-pah beat for dancing couples.

The cultural center campus includes a genealogy library and a Texas-Czech village with historic houses, a replica tavern/store, and the Zapalac Sawmill, built around 1895. You’ll also find the Czech Music Museum of Texas, set in a restored 1890s Texas-Czech farmhouse, with memorabilia from three genres of Czech music in addition to polka: classical, spiritual, and brass. The fair pavilion, a 1925 dance hall, hosts public dances and private events. 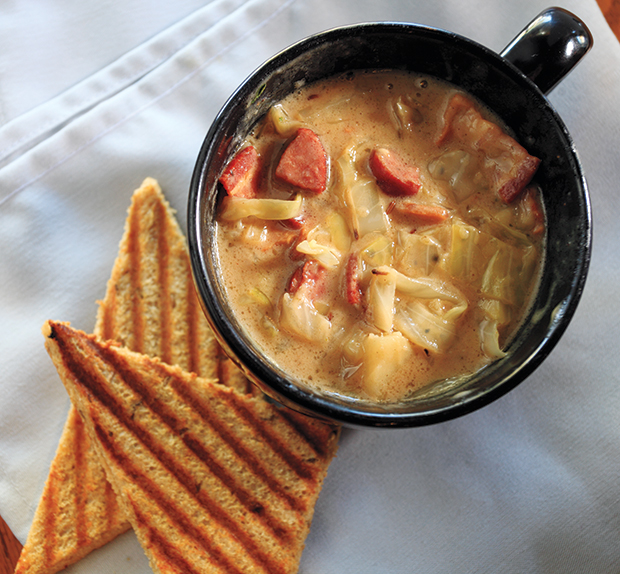 Cabbage soup at Latte on the Square in La Grange. (Photo by Eric W. Pohl)

Fayette County measures 950 square miles, but the population is only around 25,000, so there’s a lot of driving between communities. The La Grange downtown square offers two options to fuel up: Latte On the Square, which serves coffee drinks and food, including a Czech cabbage soup with potatoes and kielbasa that turns La Grange into Prague on first taste; and Big State Coffee House & Roastery, where customers can watch (and smell) the roasting of coffee beans.

The Fayette County Courthouse, built in Romanesque Revival style in 1891 and beautifully restored in 2005, dominates the downtown square. Self-guided tour pamphlets are available in the courthouse, and docents with the La Grange Visitors Bureau offer tours on Saturdays.

For aspiring chefs, the first stop on the square is Le Petite Gourmet Shoppe, which carries cookware, cutlery, spices, and kitchen gadgets. If you’d rather pay for skilled cooking by others, there’s Prause’s Meat Market, established on the square in 1904 and still a draw for raw meats and great barbecue. Lukas Bakery serves tasty kolaches, and the homey Bistro 108 serves locals and day-trippers from the big city with its chef-prepared dishes ranging from chicken-fried pork chops to hearty salads and grilled catfish.

Just off the square, the Texas Quilt Museum displays rotating exhibits of artful quilts in a building that was constructed as a furniture store in 1893. The original clay bricks, longleaf pine floors, and broad bay windows create an airy atmosphere in the 10,000 square feet of exhibit space. Next door, the museum’s Grandmother’s Flower Garden features plants that would have been found in a Texas garden in the 1893-1930 time frame, such as purple coneflower and bachelor button. 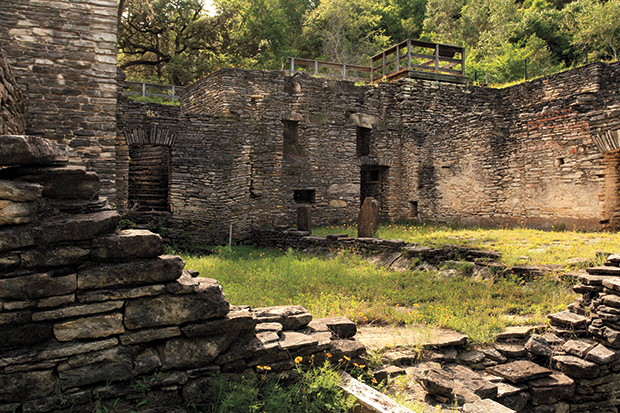 The ruins of the Kreische Brewery near La Grange. (Photo by Eric. W. Pohl)

If you’re coming from the Houston area, be sure to hit Hruska’s in Ellinger for fantastic kolaches and sausages. You can eat there or find prime picnicking at Monument Hill & Kreische Brewery State Historic Sites, located about one mile south of La Grange. Set on a 200-foot bluff overlooking the Colorado River, the park offers walking trails; tours of Monument Hill (where a tomb holds the remains of Texian soldiers who were killed during the Republic of Texas period); the 1850 home of Saxony immigrant Heinrich L. Kreische; and the ruins of an 1860 brewery built by Kreische—one of the state’s first commercial breweries.

My favorite drive in all of Texas is US 77 from La Grange to Schulenburg, a distance of 17 miles that will take three hours if you do it right by taking a few detours. I usually start at Weikel’s Bakery in La Grange. It may look like another gas station, but Weikel’s serves delicious sandwiches on fresh-baked wheat bread, as well as an assortment of fruit kolaches and their sausage cousins, klobasniky.

I like to save St. Mary Catholic Church in High Hill, known as “the Queen of the Painted Churches,” for the grand finale. So, a side trip I recommend is a detour starting on Farm-to-Market Road 1383, first through Ammannsville and then to Dubina, the first all-Czech settlement in Texas. To show that the good ol’ days weren’t always better, Dubina’s ornate painted church, Sts. Cyril and Methodius Catholic Church, has preserved its primitive outhouses, with “Men” and “Women” written in Czech. These are just for show, not to go. 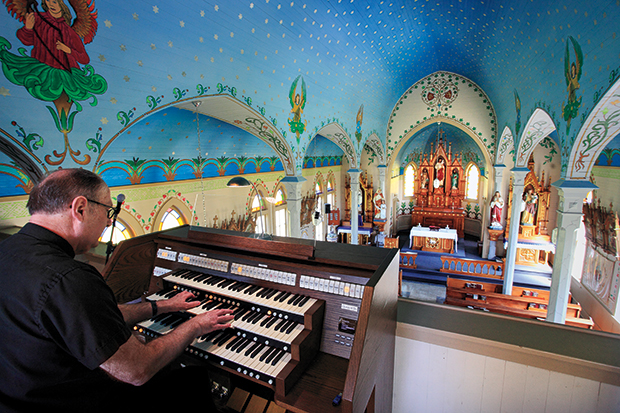 At the church, take a right on FM 615 (Piano Bridge Road). The route from Dubina to High Hill is especially soothing, as you’ll cross the historic Piano Bridge (built in 1885) over the Navidad River. It used to sound like your tires were tickling the ivories before the boards were reinforced.

Enough build-up, you’re ready for St. Mary’s, which differs from other turn-of-the-century Texas-Czech churches in that the paintings—depicting angels, lambs, and other religious subjects—were done on canvas first, then glued and hot-ironed to the walls. It’s like the Sistine Chapel in a prairie ghost town!

Just three miles south of High Hill is Schulenburg, a town developed by German and Czech settlers. Schulenburg is partly known for the Stanzel Model Aircraft Museum, which tells the story of Victor and Joe Stanzel, brothers from Schulenburg who started a model and toy plane company in the 1930s.

But in the past decade, with the openings on Main Street of the beautifully restored Sengelmann Hall—a restaurant, saloon, and dance hall—and the Texas Polka Music Museum, Schulenburg has taken on the nickname of “the jewel of the Polka Belt.”

The Polka Museum is a must-stop on this trip, not only to read about some of the area’s musical pioneers, such as the Baca Band, which celebrated the World War I victory in 1918 with a blowout dance at the SPJST No. 1 in Fayetteville, but also to pick up some authentic music for the drive. The Polka Museum carries CDs from most of the bands in Fayette County, including the Dujka Brothers, Jerry Haisler and the Melody 5, The Czechaholics, and the Praha Brothers.

Once you get your fill of dance halls and painted churches, Fayette County offers other attractions that draw visitors from across the state. For some, a perfect La Grange day could be golfing at Frisch Auf! Valley Country Club followed by a concert at The Bugle Boy, the best little listening room in Texas. (It’s practically state law to use “best little … in Texas” quips when the topic is La Grange, former home of the notorious Chicken Ranch bordello.)

And in northern Fayette County, Round Top is home to world-famous antiques fairs and the Round Top Festival Institute, which hosts a Summer Festival with concerts by classical musicians in town for six weeks of concentrated training. Nearby, the University of Texas’ Shakespeare at Winedale program hosts renditions of the Bard’s repertoire in July and August in the Winedale Theater Barn.

Fayetteville is another historic Czech town with tons of charm, plus two great cafes in Orsak’s (country cooking and burgers) and Joe’s Place (steaks and seafood). The historic Country Place Hotel on the Fayetteville town square takes guests back in time with comfort and charm. The 1900 hotel was faithfully restored in 2003, including a second-story balcony with rocking chairs overlooking the square.

The most satisfying getaways often mix the exotic with the familiar, and a tour of Fayette County will give you both. For me, the fun part is exploring all the little stops in-between.