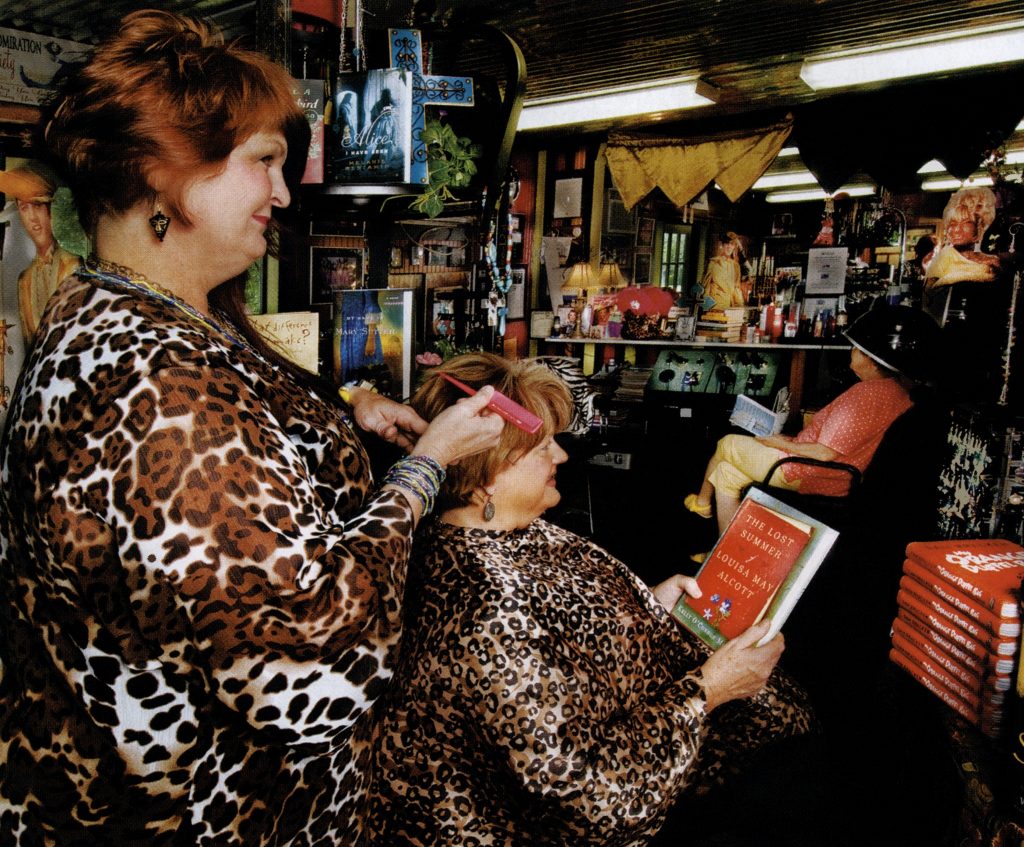 Kathy Patrick often talks reading with customers
at Beauty and the Book, a Jefferson hair salon that features bestsellers as well as blow dryers. (Photo by Stan Williams)

As I drove over big Cypress Bayou last January, the Spanish moss-draped trees ahead seemed to part like a curtain across a stage, creating an illusion of mystique and magic. I’d just arrived in the historic northeast Texas town of Jefferson, known for its Victorian-style B&Bs, French Quarter-style architecture, antiques shops, and quaint eateries. But in the past few years, Jefferson has earned a new moniker: the little town that reads. I was in town to celebrate the 10th anniversary of Kathy Patrick’s Pulpwood Queens and Timber Guys Book Club, the largest book group in the country, which originated here and meets the third weekend of every January for a literary festival known as the Girlfriend Weekend Author Extravaganza.

With a few hours to spare until events commenced, I cruised through town to take in the sites and visit a couple of Jefferson’s literary venues. Red-brick roads led me through the historic district to the Jefferson Historical Museum. Built in 1888 as a federal courthouse and post office, the museum showcases thousands of artifacts relating to Jefferson’s history, including a collection of novels, plays, and short stories by journalist and novelist John Barry Benefield. Benefield grew up in Jefferson and often wrote about life in East Texas; his bestselling 1925 comedic novel The Chicken-Family Wagon portrays a Southern family’s move to New York.

Four blocks west, Scarlett O’Hardy’s Gone With the Wind Museum displays one of the largest collections of Gone With the Wind memorabilia in the world. Owner Bobbie Hardy began collecting items more than 30 years ago; rarities include a signed first edition of Margaret Mitchell’s epic novel, along with
autographs of film stars Vivien Leigh, Clark Gable, Leslie Howard, and Olivia de Havilland. On my self-guided tour, I discovered a reproduction of Scarlett’s green drapery dress and a miniature version of a two-story, eight-room plantation house, complete with a library and sweeping staircase.

I could have easily lost myself in Scarlett and Rhett’s world, but I reluctantly departed to check into my accommodations for the weekend. I’d chosen a room in the two-story Wise Manor Bed & Breakfast Inn, which dates to 1851 and sits beneath a grove of pecan trees just a short walk from downtown. Owner Susan Wise grew up in this house, as did her mother and aunt and uncle. As I made myself at home, Susan and I visited, and I learned that she is a librarian. Wherever I looked, it seemed, I found books.

A few months prior to the 2010 event, I had met the book festival’s ringleader, Kathy Patrick, while enjoying a relaxing weekend in Jefferson. I happened by her shop, Beauty and the Book, a beauty salon that doubles as a bookstore, and I was as intrigued by the decor as the concept: The shop brims with bestsellers, books by first-time authors, and literary classics, but Patrick also offers rhinestone tiaras, handcrafted jewelry, and vintage clothing for sale, along with hot pink T-shirts emblazoned with her book club’s logo.

When I stopped by, Patrick was styling a customer’s hair, and the two were discussing books. She invited me to join the conversation, and over the hum of the blow dryer, described her mission to promote literacy and get folks reading. “Books bring people together in a special way,” Patrick said. ”When you read a book and share your thoughts with others, it takes reading to an entire new dimension!”

In her own book, The Pulpwood Queens’ Tiara-Wearing, Book-Sharing Guide to Life, Patrick wrote about making the most out of life and giving back to the community; her endeavors have landed her on Good Morning America and The Oprah Winfrey Show. Since the book club began in 2000, it has grown to more than 300 chapters across the United States and in 10 foreign countries. As I left her shop, she extended an invitation to return in January to see for myself how her little town can draw a big crowd.

The 2010 event kicked off with an author/ reader gathering at the Excelsior House Hotel, which hosted writer Oscar Wilde in 1882, while he was in town to give a lecture at the Carnegie Library. Patrick had arranged for cookbook authors Debbie Thornton (Any Blonde Can Cook), Janis Owens (The Cracker Kitchen), and Lynn Fredrickson (Specialties of the House) to prepare a few Southern dishes for the readers attending. As folks dined on Coca-Cola ham, corn casserole, crawfish gumbo, and chocolate cake, Patrick introduced the authors and gave them the opportunity to pitch their books. “I wanted to make it easy for authors and readers to get together,” she explained.

Over the next two days, Kerry Madden, author of Up Close: Harper Lee, shared stories about her interviews with residents of Lee’s hometown; first-time author Jamie Ford told of his detailed research of internment camps during World War II while writing the bestseller Hotel on the Corner of Bitter and Sweet; and bestselling author Pat Conroy (The Great Santini and South of Broad) entertained us with his story about the day Barbra Streisand called wanting to make a movie based on his book The Prince of Tides. Thinking the call was a prank, he asked her to sing “People.” After a short pause, she granted his request.

The upcoming 2011 event-scheduled for January 13-16- is one I won’t miss. Pat Conroy is returning as a keynote speaker along with his bestselling-author wife, Cassandra King, and his daughter, Melissa Conroy, also an author. Fannie Flagg will be there to talk about her new novel, I Still Dream About You, Honey, due out in November. Patrick has confirmations from more than SO other authors.

The 11th annual Author Extravaganza is sure to be another sellout.