Written by: James S. Haley
Photos by: Will van Overbeek

Written by Art Williams, Photographs by Will van Overbeek | From the March 2015 issue | Updated: February 16, 2015 | Filed Under: Culture 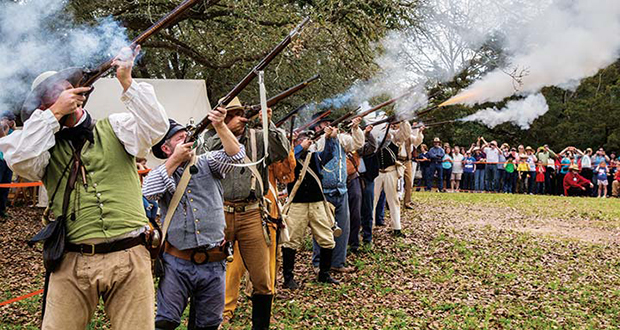 The country roads east of Brenham traverse a region steeped in Texas history, the very heart of Stephen F. Austin’s colony. Driving these verdant rolling woodlands and fertile prairies, it’s easy to understand why colonists arriving in the 1820s fell in love with the area.

Join Washington’s Texas Independence Day Celebration from March 4-5, including the new Eve of Texas Independence event in Brenham. There, guests get to mix, mingle and dine with Judge John P. Coles and his wife (early Washington County Texans) as Texas heroes/heroines (Sam Houston and Texas delegates) come in for a true 1830s feast in the heart of Hickory Grove (current day Brenham). This feast is the send off before they continue their journey to Washington to create a new nation by signing the Texas Declaration of Independence. This event emulates the days immediately before the 1836 Constitutional Convention with authentic foods of the era, period music, entertainment, historical characters, and the feature movie Houston: The Legend Of Texas.

Washington-on-the-Brazos State Historic Site is off of Farm to Market Road 1155 between Navasota and Brenham. The park is open daily from 8 a.m. to sundown, and the Visitor Center opens from 10 a.m. to 5 p.m. Park entry is free, but tour tickets are required to enter the sites within the park.

Also mentioned in the story:

The historic towns here are among the most significant to Texas’ early days, when the influx of American settlers led to the territory’s break with Mexico.

The town of Chappell Hill has the distinction of being founded by a woman, Mary Hargrove Haller. Owing to Texas’ Spanish heritage and status as a Mexican province at the time, women could own property in their own right—a position all but impossible in the United States. Founded in 1835, the nearby town of Independence became a leading religious and educational center in frontier Texas. Sam Houston, the Republic’s first elected president, bought a farm here so his children could attend the best schools. Today, the ruins of the first Baylor University crown a hill west of town. About 15 miles east of Independence lies Washington-on-the-Brazos, preeminent among the colonial towns because it hosted the Convention of 1836, where delegates from the fledgling nation of Texas met to declare independence.

Washington, as it was called for short, owes its beginnings to Andrew Robinson, one of Austin’s initial group of “Old Three Hundred” colonists and an early firebrand for Texas independence. In 1831, Robinson gave one-quarter of a league from his land grant to his daughter and son-in-law, upon their promise to care for him in his old age. A town quickly grew around the busy ferry crossing on the Brazos River. The settlers named their home Washington—not for the U.S. capital but for the Georgia hometown of Asa Hoxey, a charter member of the town company. When the revolution started, Washington boosters hoped to jump-start their economy by hosting the Convention of 1836 to chart Texas’ future course.

Texas preserves the memory of this revered moment at Washington-on-the-Brazos State Historic Site, a 293-acre park that includes Independence Hall (a replica of the building where the delegates convened and adopted the Declaration of Independence), Barrington Living History Farm, and the Star of the Republic Museum. The museum interprets Texas history from the days of the American Indians to the Mexican War and showcases one of the finest exhibits anywhere of articles relating to early Texas social history. Its greatest treasure: the only surviving Lone Star flag known to have flown over the Republic.

Barrington is the plantation home of Texas’ last president, Anson Jones. Originally built in 1844 about four miles west of Washington, the home was moved to the historic site in 1936 as part of the Texas Centennial celebration. Guided by Jones’ own records, the living history farm re-creates life on a 19th-Century plantation. The historians who operate the farm today invite visitors to roll up their sleeves and sew a quilt, make soap, plow a furrow behind two enormous oxen, and appreciate the authentic heritage breeds of chickens—some of which lay green eggs.

While Barrington offers a taste of pioneer life, the accounts of those who lived through the time period describe a raw existence that’s difficult to imagine these days. When William Fairfax Gray of Virginia arrived in Washington as delegates gathered for the Convention, he found one boardinghouse, in which “the host’s wife and children, and about thirty lodgers, all slept in the same apartment, some in beds, some on cots, but the greater part on the floor,” he wrote in his diary.

The boarding fare was equally Spartan. “Supper consisted of fried pork and coarse corn bread, and miserable coffee,” recalled Gray. Gray failed in his bid to be the Convention’s secretary, but the diary he kept, which was first published in 1909, is considered a better record of the Convention than the official one. He described Washington as “a rare place to hold a national convention in. They will have to leave it promptly to avoid starvation.” Promptness indeed—the Convention met on March 1 and produced the Declaration of Independence the next day.

Washington’s first stint as the national capital came to an early end. Mexican President Santa Anna invaded Texas in February 1836, the Alamo fell on March 6, and four separate columns of Mexican soldiers marched eastward, sweeping Texan settlers before them. Washington was quickly abandoned. After Texas won independence with its victory at San Jacinto, the Texas capital bounced from Columbia to Houston and then to the new village of Austin, but the question of a permanent location was far from settled.

Another Mexican invasion, in March 1842, hastened the issue. The Mexican army occupied San Antonio and threatened Austin, prompting President Houston to pull the government back to Washington. It was little more comfortable than before. The presidential office was a one-room cabin; the Republic’s senate leased space in the attic above a saloon operated by Col. B.M. Hatfield. To accommodate strait-laced senators who objected to passing through the saloon to reach the senate, Hatfield built an outdoor stairway to the attic and closed the indoor stairway with planks. He did not nail them down, however, as the senate was not always in session.

As word of Texas’ independence—and trade potential—spread, other countries took notice. During Washington’s tenure as capital, the empress of China sent an opulent porcelain tea set to express her good wishes; the delicate teapot is stored at the University of Texas Dolph Briscoe Center for American History. The sultan of the Ottoman Empire gifted President Houston with a gaudy ensemble of red silk, from fez down to yellow leather curled-toe boots. In her book Star of Destiny: The Private Life of Sam and Margaret Houston, Madge Thornall Roberts recounts that Margaret, who suffered from depression all her life, dissolved in laughter at the sight of her husband done up like a sheik.

In the interest of preservation, the Texas Parks and Wildlife Department has left the original Washington town site mostly undisturbed, says Jonathan Failor, a park ranger at the historic site. However, limited excavations conducted over the decades have yielded fascinating glimpses of life at that time, such as a delicate glass salt cellar that’s now on display at the Star of the Republic Museum. Other artifacts, such as bricks, nails, glass, Texas-made pottery, English porcelain, and buttons, are kept at a Texas Parks and Wildlife facility in Austin, Failor says.

With independence came religious freedom, and Washington was a prime destination for Protestant evangelists. Robert Alexander preached the first Methodist sermon, using the billiard table in the Senate chamber over Hatfield’s for his pulpit. The billiards players told him he could not preach, but as a burly man who stood six-foot-five, Alexander pretended not to hear them. They listened meekly and put together a contribution. Visitors today can share some of that atmosphere just down the road at Independence at the Texas Baptist Historical Museum, which preserves the 1872 Independence First Baptist Church, where Sam Houston carved his and Margaret’s initials into one of the pews.

With the establishment of Austin as the permanent capital in 1839, Washington entered a long decline. City fathers spurned the opportunity to attract a railroad and instead invested in two small riverboats to continue bringing commerce up the Brazos. The mistake was fatal, and the town withered until the original site was overgrown. The state purchased the site in 1916, added more land over the years, and built replicas of Independence Hall in 1929 and 1970.

Of the many historic sites preserved in history-conscious Texas, none evokes the 10 years of the Republic more completely than Washington-on-the-Brazos. The presence of a world-class museum on the spot where independence was born, and only steps from the earthy, hands-on living history of a working plantation, is a combination simply not found elsewhere.