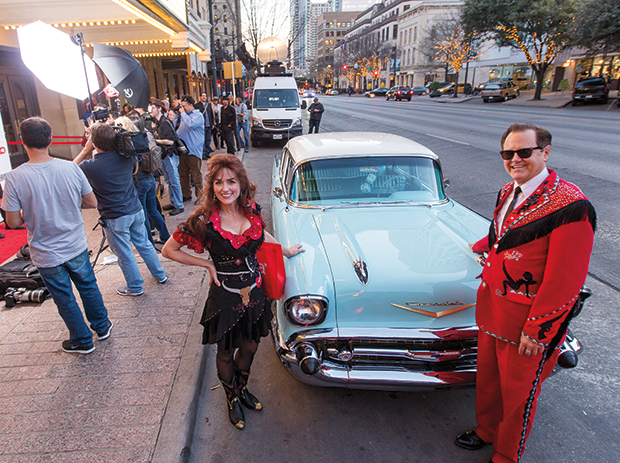 “Western Swing makes my world go round,” said Kristyn Harris as she accepted her award in the Western Swing Female category of the Ameripolitan Music Awards show.

The sincere devotion of Harris, who’s based in McKinney, drew hoots and hollers from the crowd of Ameripolitan music’s true believers gathered Wednesday night, February 15, at the Paramount Theater in downtown Austin.

Fans nominate musicians for the awards via the Ameripolitan website, and then they vote on the nominees to select the winners. Here is a full list of 2017 winners:

“I used to say proudly and matter-of-factly, ‘Country,’” says Watson, whose original songs bear the influence of traditional masters like Merle Haggard, George Jones, and Red Simpson. But as mainstream country music has increasingly assimilated the sounds of pop, rock, and rap, Watson finds himself backpedaling: “I’m country music, but … and then I would spend 15 or 20 minutes telling them what I’m not. So I found it easier to educate, rather than re-educate. And that’s why we came up with a different name that would apply to us.”

Thus was born “Ameripolitan” music, a genre incorporating “original music with prominent roots influence,” namely bands playing original honky-tonk, rockabilly, Western Swing, and outlaw country. And to support and encourage other musicians who may fall through the mainstream cracks, in 2013 Watson launched the Ameripolitan Music Awards.

The fourth edition of the Ameripolitan Music Awards takes place February 15 at the century-old Paramount Theatre in downtown Austin. Along with awards, the show includes musical performances and tributes to early heroes of country and rockabilly music—legends such as George Jones, Charley Pride, Wanda Jackson, and Ray Price. This year’s show will feature about 15 musical performances, including Jesse Dayton, Bonnie Montgomery, Jake Penrod, and Junior Brown (who will be presented with the 2017 “Keeper of the Key” award). The 2017 Founders of the Sound honorees are Bob Wills’ Texas Playboys and The Crickets, who got their start as Buddy Holly’s bandmates.

“As the name implies, they’re the roots—they invented a type of music that people could grow on,” Watson says.

The Ameripolitan Music Awards has many of the trappings of a glitzy awards night—a red carpet entry for the nominees, semi-celebrity awards presenters, a topnotch house band, hefty bronze trophies, and emotional acceptance speeches. But true to the irreverent sensibilities of the musicians carrying the torch for Ameripolitan music, the show also romps with humor, rebellion, and rollicking music.

The fun starts with the musicians’ arrival, designed to make a splash in the heart of town on historic Congress Avenue. At last year’s show, Darci Carlson, a Seattle-based singer-songwriter nominated last year and this year in the “outlaw female” category, arrived on the back of a Harley Davidson, escorted by a pack of burly bikers. Others made the scene in pristine vintage hotrods. Watson himself showed up in a 1941 Mercury, chauffeured by Steve Wertheimer, owner of the Continental Club, a popular Austin venue for country, rock, and rockabilly bands. The musicians then queue up to walk the red carpet and pose for photos—a parade of Western-cut suits, cowboy hats, leather jackets, tattoos, sparkly gowns, horn-rimmed glasses, long beards, and sculpted hair.

Asleep at the Wheel bandleader Ray Benson, who will return as the show’s co-host this year, opened last year’s event with a question: “Do we really need another awards show?” Benson went on to dismiss the popular awards shows that air on network TV, such as the Country Music Association awards—“CMA stands for Country My A**”—and compared the origin of the Ameripolitan Music Awards to that of the Academy of Country Music in 1964. At that time, bands in the Western United States playing styles like the Bakersfield Sound, Western Swing, and cowboy music felt ignored by the Nashville establishment and responded by starting their own awards.

“That’s what needed to be done now,” Benson, himself the recipient of two Ameripolitan awards, told the crowd. “You are going to see folks who are legends of all time … and folks who will become legends because of y’all.”

Fans nominate musicians for the awards via the Ameripolitan website, and then vote on the nominees to select the winners. The show includes 16 awards, such as outlaw or rockabilly male and female, Western Swing group, Ameripolitan venue, and Ameripolitan DJ. With five or more nominees in each category, the show draws around a hundred nominated musicians, who sit among the audience at the sold-out Paramount (capacity 1,270). The show’s informality is part of the fun—rubbing shoulders with the honorees in the aisles and lobby bar.

Texas boasts the largest share of award nominees with 22, but the field is geographically diverse. This year, the 95 nominees represent 22 states and eight countries, including Sweden, Austria, Germany, Italy, Spain, Australia, Canada, and England.

Charlie Thompson’s journey from his hometown of East Grinstead, England, paid off last year when he won the honky-tonk male award. Decked out in a Western leisure jacket and white kerchief, Thompson credited the sincerity of American roots music for its international reach. “It comes from the heart, it doesn’t come from the bank account,” says Thompson, who recalls his early introduction to country music through his father’s Slim Whitman LP, Indian Love Call. “And I think this music will always win through because people love to hear something that’s real, soulful, from the heart.”

The concentration of musicians, club owners, disc jockeys, and record labels on hand for the awards show creates a prime networking opportunity. On the weekend before the show, the organization schedules a series of showcases in Austin music clubs, giving bands and fans the opportunity for more music and interaction.

“Part of the goal is to connect everybody,” Watson says. “We’re not the mainstream of anything, but we’ve got a niche. We’re trying to pinpoint where this music can be found and the people that help put it on.”

Rosie Flores, the Austin-based singer, songwriter, and guitarist known as the “rockabilly filly,” won honky-tonk and rockabilly honors in the Ameripolitan Music Awards’ inaugural year and has been involved each year since as a presenter or performer.

The awards are gratifying, she says, “because I felt like my fans who were voting for me were the culmination of all the years I’ve been doing this. It made me feel like all the work I’ve been doing hasn’t been for nothing. It’s wonderful to be recognized for what you do, and I carry that with me.”

As for the future, Watson plans to continue the awards show as a means of invigorating Ameripolitan artists and rejuvenating the fan base. Maybe someday, he says, the show could become a regular radio broadcast in the spirit of Louisiana Hayride, a 1950s show that popularized country-and-western music around the nation.