The new Bryan Museum in Galveston

Written by Art Williams, Photographs by Will van Overbeek | From the December 2015 issue | Updated: October 28, 2018 | Filed Under: Culture 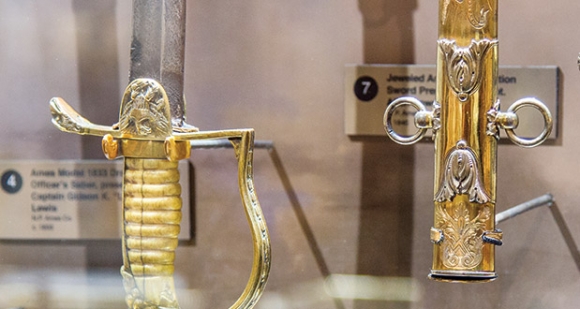 Houston businessman J.P. Bryan had been searching for the perfect site for a museum to showcase his immense collection of artifacts and artworks chronicling the history of the American Southwest. When he first stepped through the grand entrance of the former Galveston Orphans Home in the summer of 2013, he knew that he had found the right place.

J.P. Bryan, the founder of the Bryan Museum and an avid collector of historical treasures, discusses his five favorite artifacts in the museum.

“Our story is the story of the West,” Bryan says, “and when people were looking to start a new life for themselves in the West, they came through Galveston.”

The historic brick building, which was built in 1895 and reconstructed after the Hurricane of 1900 in a Renaissance Revival style, suits the historical nature of Bryan’s collection. The home harbored about 6,000 children as an orphanage—including during the 1900 storm—before closing in 1984. The building had fallen into disrepair, but Bryan saw past the broken windows, rotted doors, and crumbling mortar: The spacious children’s dormitories could be converted into exhibition spaces, and an outbuilding could house a gift shop. In less than two years of construction and renovation, the 27,000-square-foot building took shape as The Bryan Museum and opened to the public in June 2015.

Tracing his ancestry directly to Moses Austin (the father of Stephen F. Austin), Bryan has a passion for art and history that’s infectious—and apparently incurable. He started collecting at a young age and continues to acquire new finds at a steady pace, as does his wife, Mary Jon.

Sharing history with others is what inspired Bryan to feature his private collection of some 70,000 items in a public museum. “I wanted to pass on to people young and old the fabulous history that we share,” says Bryan, who also owns the 1927 Gage Hotel in Marathon. “I think it should be an inspiration to all of us. History is exciting stuff. I want visitors to know the excitement of history—and to learn from it.”

The Bryan Museum certainly offers a visual adventure, with 10 exhibition rooms and more than 1,000 objects on display. Objects of incredible beauty and significance pack the galleries, such as an early map of Texas published in 1833 and based on a hand-drawn version by Stephen F. Austin and an elaborately hand-tooled leather saddle embellished with silver that dates to Spanish colonial times.

The first-floor galleries present a chronological history of the American West, beginning with its native civilizations and early explorers, and continuing through colonization, the Texas Revolution, the Mexican-American War, the Civil War, and the end of the 19th Century. Fascinating relics bring the story to life—among them a 1749 bronze mission bell, forged in Málaga, Spain, and shipped to the New World, and a rare circular shield of painted, hand-stitched buffalo hide made in the late 1700s or early 1800s by the Cochiti Pueblo people, who live on the Rio Grande in New Mexico. One of the most unusual objects on display is a Civil War-era violin case modified to conceal a shotgun, with a tin violin used to hold powder and shot as well as a built-in music box that plays “Dixie” when cranked. 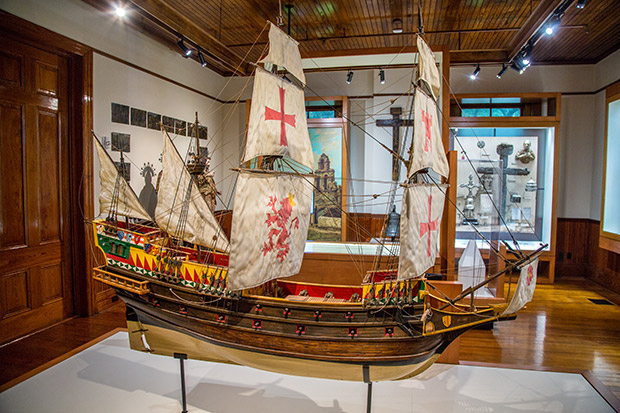 A model galleon in the Spanish Colonial Era Gallery.

Some of the objects on display can be linked to specific individuals who shaped the development of Texas. Visitors can marvel at a 1551 edition of the memoir of 16th-Century Spanish explorer and castaway Cabeza de Vaca; Stephen F. Austin’s calling card and handkerchief; Santa Anna’s field command book from the Texas campaign of late 1835 and early 1836; and a receipt for coffee, tobacco, and other supplies handwritten in flowing script by William B. Travis at the Alamo, just three days before the siege began on February 23, 1836.

The upstairs galleries feature rotating exhibitions and thematic displays, as well as an archives and research library (available by appointment) with many shelves of rare books and holdings of historical documents such as letters, land grants, business papers, photographs, maps, and ephemera related to Texas and the West.

The stairwell and the broad landing of the second floor comprise The Rest of the West exhibition space with an arsenal of antique firearms, a dazzling constellation of spurs, and mannequins modeling spangled 1950s rodeo costumes for ladies’ barrel racing and trick riding. Art and artifacts on the walls range from a petrified buffalo skull to Andy Warhol’s vividly colored portrait of Annie Oakley from his “Cowboys and Indians” series. Another gallery, called Texas Masters, is devoted to artworks by such well-known artists as José Arpa, Tom Lea, and Elisabet Ney. The gallery also includes two of Julian Onderdonk’s celebrated oil paintings of bluebonnet fields and several of Frank Reaugh’s plein-air sketches of West Texas vistas, along with a box of Reaugh’s custom pastels that he made to match the hues of the native flora.

The adventure continues on the ground floor, where children search for treasure in a room sculpted to look like a pirate’s cave. The walls of a larger room next door feature brightly colored murals depicting mermaids and sea creatures. Here, young visitors climb aboard a 13-foot-long ship with replica cannons emitting puffs of smoke. Nearby, a bustling wharf scene with a protruding dock provides a venue for a video presentation about the historical and economic importance of the Galveston port, showing scenes from the island’s past.

Even when the building served as an orphanage, the ground floor was a popular space for play, as it once housed an indoor swimming pool. Today, this space also includes cases filled with items left behind by the former residents—clay marbles, a stray shoe, a rusty toy gun. Most captivating is the preserved hideout in the crawlspace beneath the stairs. The walls are scrawled with graffiti, childish threats such as “Keep out this means you,” and more poignant phrases like “no mom no dad so sad.”

In many ways, The Bryan Museum is preserving not only the history of the Western United States but also the history of the building. Over the past year, the museum’s director, Jamie Christy, has conducted oral-history interviews with several of the former residents, one of whom was brought to tears upon seeing the restoration of the house to its former glory. The orphaned home has been given a new purpose: The building that provided a safe haven for children for nearly a century is now a safe haven for history.