Overnight at Fort Concho – with company? 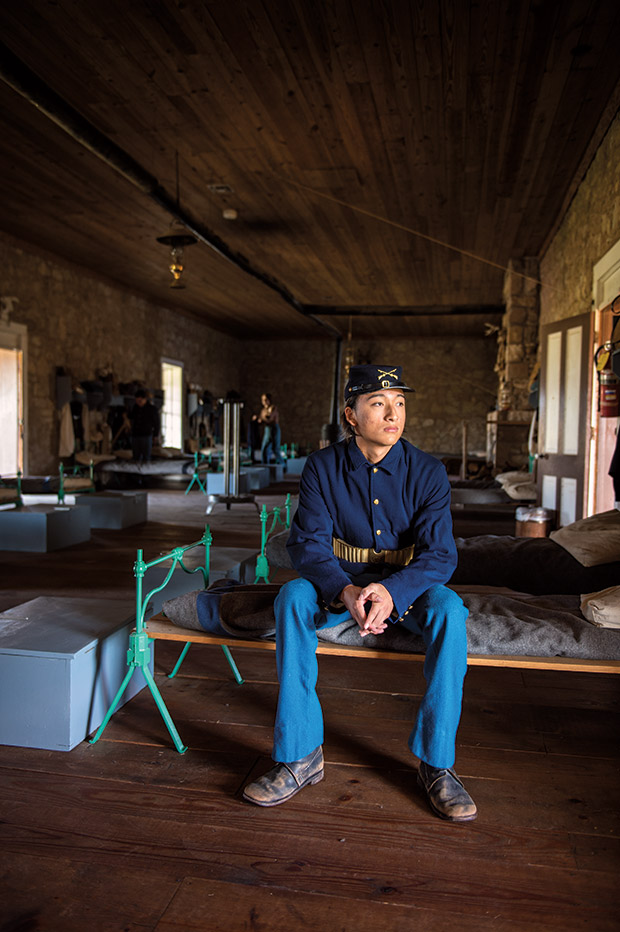 Some say my lodging for this evening—the commander’s quarters at historic Fort Concho—is home to a ghost. About 13 years ago, an overnight visitor reported seeing the apparition of a cheerful, mild-mannered girl in the building, wearing a peach-colored dress with her hair pulled back.

The girl looked just like an old picture of Edith Grierson, a 13-year-old who succumbed to typhoid fever in one of the house’s bedrooms in 1878. Others have glimpsed a girl of similar age playing jacks in that same fateful room.

Other mysterious sightings have surfaced on the grounds of Fort Concho National Historic Landmark in San Angelo. Last year, a maintenance man saw a woman dressed in black leaving the old hospital building and walking across the grounds. Parents picking up their children at an adjacent elementary school observed the same apparition holding up traffic. And, Evelyn Lemons, the fort librarian and archivist, recalls inexplicable shadows and voices in empty barracks, as well as unlocked doors mysteriously locking on their own.

“I like to believe there are some remnants of the past here,” says Lemons, who had no interest in ghosts before working at Fort Concho. “The reports of ghost sightings are hard to substantiate, so I don’t want to write them down. I don’t want to overanalyze it, but when things happen that you can’t explain … .”

I’m hoping Edie Grierson will make an appearance during my stay in the old Officers’ Quarters One, but regardless I’m enjoying this chance to stay in a lodging unlike any I’ve experienced before. Fort Concho is full of Old West frontier anecdotes like the tragic story of Edie, who was the daughter of Colonel Benjamin Grierson and his wife, Alice.

The U.S. Army created this outpost on the Concho River in 1867 to protect American settlers as the Texas frontier expanded westward following the Civil War. Built over 12 years and operational for only 22 years, Fort Concho was home to about 500 servicemen and covered about 1,600 acres at its peak. The fort consisted of a row of officers’ quarters, another of barracks, the headquarters building, and a handful of other structures. As the fort grew and went about its business, the “whiskey and sin” town initially called Santa Angela developed nearby. With the arrival of the railroad and gradual taming of the frontier, the Army closed Fort Concho in 1889.

But the town—eventually known as San Angelo—kept growing. Local efforts to restore the fort began in the 1920s and picked up steam in 1961, when the federal government designated the fort a National Historic Landmark. Now owned by the city of San Angelo, Fort Concho covers 40 acres and boasts 23 original and reconstructed buildings, including 10 buildings with exhibits, as well as a year-round calendar of activities.

The fort’s walking tour—offered as guided or self-guided—is a must for visitors. The tour begins at the visitor center in the original Barracks One, which also houses the post gift shop. Barracks Two features heavy artillery from the frontier days, including a steel cannon, howitzer, Gatling gun, and mortar.

In Barracks Five, the enlisted men’s barracks, we get a view of a soldier’s life at Fort Concho. The room is filled with 20 narrow, squat beds, along with the soldiers’ equipment, such as uniforms, lanterns, crude pitchers, and small writing desks. The original Post Headquarters, with its worn pecan-wood floors, shows off sturdy, hardwood tables, bookshelves with glass doors, and wood-burning stoves.

The Post Hospital, which was destroyed by a lightning fire in 1909, was rebuilt on its original site in the late 1980s and serves as the Robert Wood Johnson Museum of Frontier Medicine. The display offers a peek into a late-19th-Century hospital setting with 10 beds, a bathing room with a sit-up bathtub, “two-seater” non-flushing toilets, and a medical station stocked with old medicine bottles and tools. The structure that houses the fort’s historic school house and chapel is especially striking. Portraits of U.S. presidents from the fort era and a 38-star American flag decorate the white-painted walls. During the fort’s 1880 School Program, local fourth graders dress in period costumes and take an old-fashioned class in the historical setting.

Then there are the Officers’ Quarters, a row of eight stately, two-story limestone houses, built in the 1860s and 1870s in a frontier Army style. Most are used today for administrative offices, but Officers’ Quarters Four is occupied by the Museum of Telephony, which chronicles the history of the telephone.

Fort Concho also plays host to numerous educational and “living history” programs depicting frontier life, as well as festive community events such as the annual Christmas at Old Fort Concho (December 4–6, 2015)—three days of shopping, historical reenactments, food and drink, period entertainment, and an Old West Santa Claus. Other special events occur throughout the year: On July 30, 2016, the fort will celebrate the 150th anniversary of Congress’ establishment of the vaunted Buffalo Soldiers, African-American cavalry units that played a key role on the American frontier.

Throughout the year, Fort Concho stages battle reenactments featuring infantry and cavalry groups. But the reenactments aren’t all war games; the fort’s “base ball” (as the word was originally spelled) club wears 1887 uniforms and plays the game using bats, gloves, and rules of the 19th Century. Furthermore, the ongoing educational programs at Fort Concho can include anything from Civil War lecture series to workshops about women in the Old West to Western art and sculpture exhibits.

Back at the commander’s quarters, my accommodations can’t be finer. Antique lights brighten the foyer, and a hardwood table, compact writing desk, and decorative stone fireplace occupy the parlor. The walls are covered with 19th-Century art, maps, and portraits, and the two small upstairs bedrooms have sturdy, 125-year-old beds. But I stay in the ground-floor bedroom, which is furnished with a wooden wardrobe, a settee with a matching chair, a dark wood dresser with attached mirror, and a child’s rocking chair. (Modern amenities like electricity, air and heat, a working kitchen, and wi-fi make it all the more livable.)

In anticipation of ghosts, I ask Fort Concho Site Manager Bob Bluthardt for his take on the alleged paranormal activity. He says ghost-hunter groups and TV crews have descended on the fort at various times over the years following reports of Edie’s ghost.

“When you’re dealing with a large-scale historical site, you are dealing with something through which thousands of people have passed through and left their marks. In their own way, their memories linger,” Bluthardt says. “But I can’t say I’m a believer in ghosts. If a ghost ever appears to me, then I’ll believe.”

As for me, I have no such luck. My stay coincides with a bitter winter cold front, but I sleep comfortably in an antique bed with a dark wood headboard nearly as tall as I am. The wheezing and moaning of the hard-working heating system set the stage for a paranormal visit, but it seems I have the place to myself. And to be honest, that’s fine. Ghosts or no ghosts, memories of the Old West live on at Fort Concho.