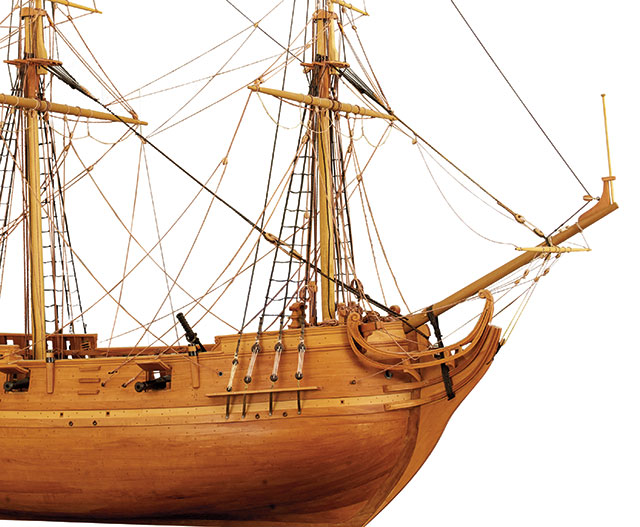 After a 330-year journey, the legendary French ship La Belle has landed at the Bullock Texas State History Museum in Austin. Wrecked in Matagorda Bay in 1686, La Belle lay in a murky grave until 1995, when archeologists made the heralded discovery and carried out a painstaking excavation.

Stay tuned to watch the Bullock Museum’s web broadcast of the La Belle reassembly and other La Belle footage. Once progress begins, the live feed will be viewable, at the link below, from 9 a.m.-5 p.m. Wednesday through Saturday.

Now, the Bullock Museum is showcasing the careful reassembly of the ship’s hull in preparation for making La Belle the permanent centerpiece of its Texas History Gallery.

In the exhibit La Belle: The Ship That Changed History, museum visitors can watch as archeologists piece together the remnants of the 52-foot-long hull, and they can explore the dramatic tale of René-Robert Cavelier, Sieur de La Salle, the French explorer whose New World misadventure had far-reaching consequences for the development of Texas.

La Belle was one of four ships in La Salle’s fleet when he arrived with 300 colonists in Matagorda Bay in 1684, missing his intended destination—the mouth of the Mississippi River on the Gulf of Mexico—by 400 miles. Crisis after crisis plagued La Salle’s expedition, which, despite its failure, prompted Spain to quickly advance its influence over the territory it called Tejas.

“La Belle is a great historical icon: a sunken ship that accidentally charted a grand new direction for the state’s history,” writes James Bruseth, guest curator of the Bullock exhibit, in his book, From a Watery Grave: The Discovery and Excavation of La Salle’s Shipwreck. “Millions of Americans now understand France’s contributions to the Lone Star State’s beginnings.”

The Bullock Museum’s exhibit provides a theater-in-the-round setting for visitors to observe archeologists reconstructing the hull, a process described as a “600-piece jigsaw puzzle.” The exhibit also displays more than 125 artifacts (over 1 million were recovered from the shipwreck), including weapons, cooking utensils, glass beads, and personal effects such as combs and rings. Interviews with archeologists, film footage documenting the discovery and excavation of La Belle, and computer touch-pad games related to French imperialism round out the exhibit.

Born in Rouen, France in 1643, La Salle first arrived to the New World in Canada in 1666. He traveled the Great Lakes and eventually sailed partway down the Mississippi River, giving the entire river watershed the name La Louisiane. In 1684, King Louis XIV commissioned La Salle to establish a settlement at the mouth of the Mississippi. 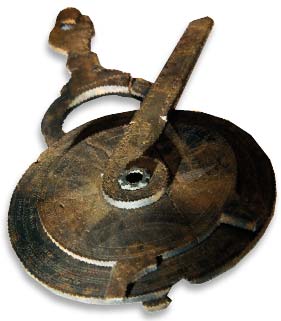 La Salle and his men sailed from the French port La Rochelle in July of 1684 and headed for the Gulf of Mexico with four ships to solidify the French claim to the Mississippi Valley. After losing three of their ships in the Gulf, the colonists established a small settlement on Garcitas Creek in present-day Victoria County. When La Salle decided to head overland to reach the Mississippi, colonists who remained at the settlement continued explorations of the coastline. In the winter of 1686, La Belle ran aground during a strong storm, and it sank in the southern end of Matagorda Bay, a quarter-mile offshore. Soon thereafter, La Salle was murdered by some of his men between the Navasota and Trinity rivers.

For 300 years the location of La Belle was unknown. Most historians and archeologists were more concerned with finding evidence of the site where La Salle was murdered and the location of his settlement, referred to in most history books as Fort Saint Louis. But in the 1970s, archeologist Kathleen Gil-more pinpointed some potential shipwreck sites. Several attempts to find La Belle failed over the next few years until a 1995 underwater survey by the Texas Historical Commission located a ship that met the theorized location and size of La Belle. Divers verified the discovery when they found a bronze cannon with the crest of King Louis XIV and a serial number that dated the cannon to the 1680s. The wreck was found about 12 miles northeast of Port O’Connor—submerged under 12 feet of water and another 10 feet of mud.

To control the muddy waters of Matagorda Bay, the excavators built a double-walled, steel cofferdam around the shipwreck. The structure enabled the crew to pump the water out of the excavation site without removing the ship from its resting place.

More than 20 archeologists supervised the diving operation, which recovered weapons like muskets and swords, and decorative combs, pins, and rings adorned with Catholic markings and symbols. Ceramic cooking utensils, pewter plates, bronze pots, wooden barrels, and tin-glazed jars that most likely served as medicine containers numbered in the hundreds. Divers also found hundreds of thousands of colored glass beads in the ship and the soil sediment surrounding the wreck. Remains of sheep, buffalo, goats, pigs, turtles, ducks, and deer provided insight into the staples of the colonists’ diet. One human skeleton and the partial remains of another were preserved in the wreck.

After all the artifacts were removed, the archeological crew began the excavation of the ship itself. The hull was disassembled and sent to the Texas A&M University Conservation Research Laboratory, where the materials were cleaned and prepared for scholarly study. Over the last few years, the Texas Historical Commission has worked with seven museums along the Gulf Coast and in South Texas to display artifacts from the wreckage in a joint project called the La Salle Odyssey. 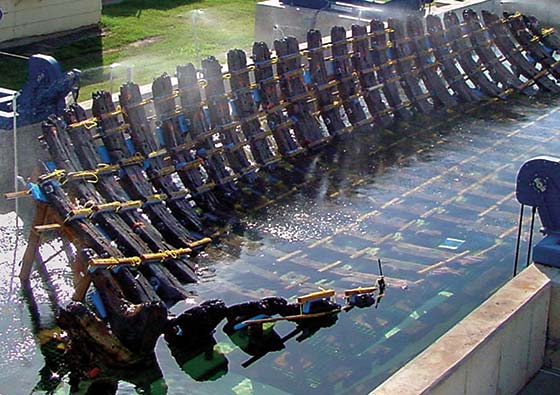 At the Bullock, the timber-by-timber reassembly of La Belle is expected to take about seven months. In November 2015, the museum will open its newly renovated first floor, anchored by the ship and thousands of La Belle artifacts. The museum has also debuted a new movie, Shipwrecked, in its Texas Spirit Theater, chronicling the experience of a 10-year-old La Salle expedition survivor named Pierre Talon. Billed as a “4D” movie, Shipwrecked combines 3D visuals with sensory effects in the seating and theater environment.

Historians disagree about the details of La Salle’s voyage. Did he purposely sail into Spanish territory seeking easy access to the silver mines of northern Mexico? Was he blown off course by Gulf storms and merely a victim of poor navigation? Or, as noted La Salle biographer Robert Weddle claimed, the French explorer could have been confused about the location of the Mississippi, based on faulty maps and his limited understanding of the Gulf’s geography.

Whatever the truth, the Spanish government took quick action when it learned that French colonists were intruding on New World territory Spain claimed as its own. The Spanish had previously shown little interest in the region in far northeastern Nueva España, but with a perceived French threat, they set about expanding the mission system in eastern and southern Texas. The consequences of these imperial rivalries would continue to influence the development of Texas for centuries to come.