Teddy Roosevelt, San Antonio, and the Birth of the Rough Riders 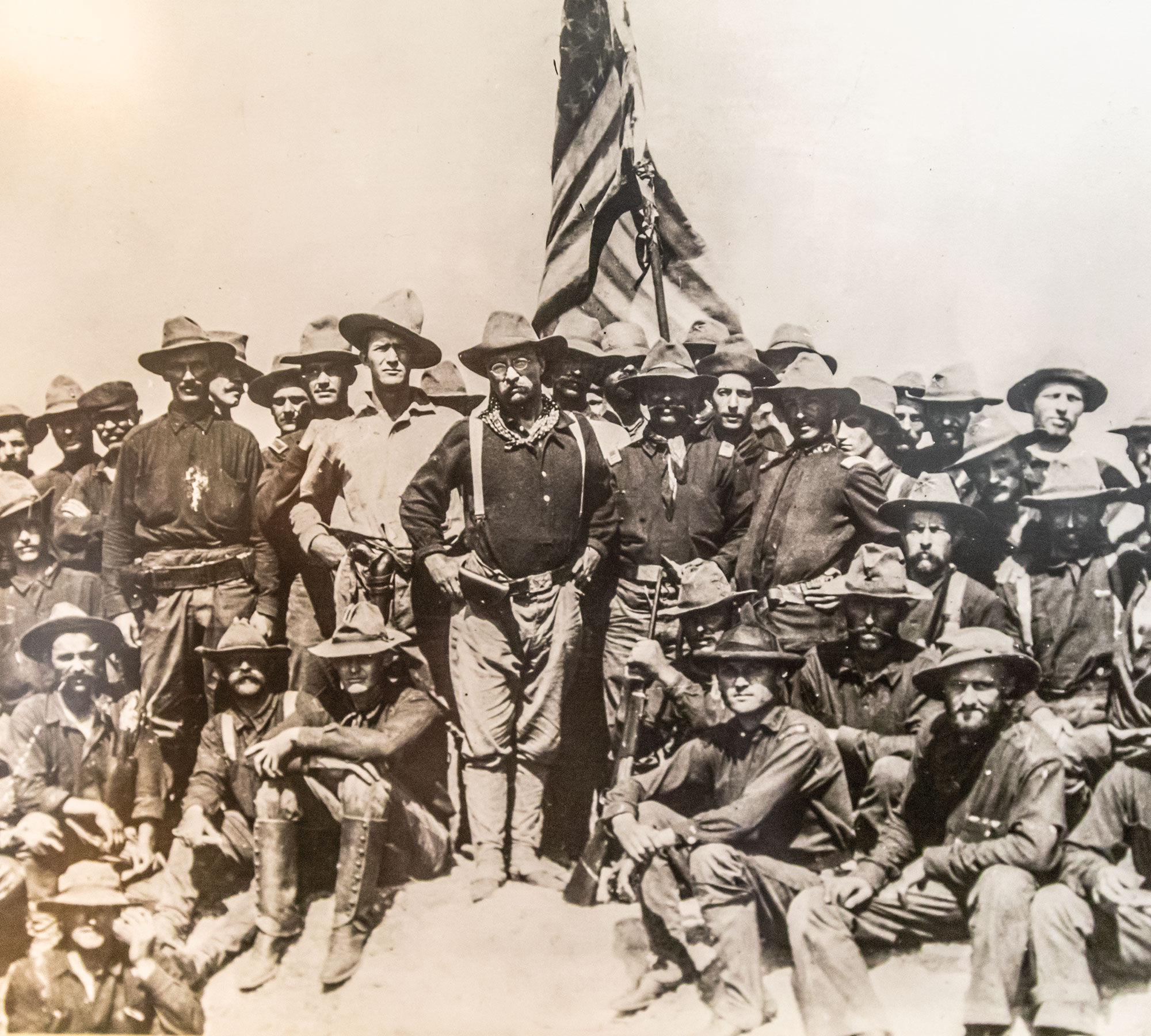 Beneath a warm Caribbean sun, down a twisted road from the tattered colonial city Santiago de Cuba, an American soldier stands frozen in time.

It’s a statue, actually, in a small park that commemorates the derring-do of Teddy Roosevelt and his Rough Riders, formally known as the 1st U.S. Volunteer Cavalry, who helped drive Spain out of Cuba during the Spanish-American War in 1898.

Roosevelt has long been one of my favorite politicians of any era, thanks to his conservation initiatives, but I knew little about his Texas connections. Then my friend Wayne Fairchild, a professional adventure outfitter in Montana, invited me to join him on a 10-day tour of Cuba. An Army veteran, Fairchild has a keen interest in military history. “Roosevelt recruited the Rough Riders in San Antonio,” Fairchild told me. “They trained in Texas before heading to Cuba.”

“Roosevelt had a special mythological view of Texas. He thought if the rest of the country was more like Texas, it would be a better place.”

My interest piqued, we made plans to visit battlefields around Santiago, the second largest city on the island after Havana. In the presence of the bronze Rough Rider statue, I could easily imagine this soldier with his rifle slung on his shoulder as one of the 1,000-plus soldiers who trained on the banks of the San Antonio River—maybe even one of the Texas Rangers in Roosevelt’s cavalry.

When I returned home to Houston, my experience overseas inspired me to head for San Antonio to see what more I could learn about Roosevelt’s time in Texas. An inveterate outdoorsman, Roosevelt first traveled to Texas in 1892 to hunt javelina not far from the Frio and Nueces rivers in the Hill Country. In Texas and the West, he encountered trappers, Native American fighters, and rustic explorers who incited his own sense of adventure.

“Roosevelt had a special mythological view of Texas,” says Clay Jenkinson, a professor at Bismark State College in North Dakota, not far from the badlands where Roosevelt hunted buffalo. “He thought if the rest of the country was more like Texas, it would be a better place. He really idolized that hyper-masculine idea of the lone man in the wilderness. Those rough and ready Westerners were his ideal.”
Lt. Col. Roosevelt returned to Texas in 1898, when he joined Col. Leonard Wood in San Antonio to raise a volunteer cavalry regiment to help oust the Spanish from Cuba. At the time, San Antonio was a diverse frontier town growing rapidly, spurred by the arrival of the railroad in 1877; the population would top 50,000 by 1900. 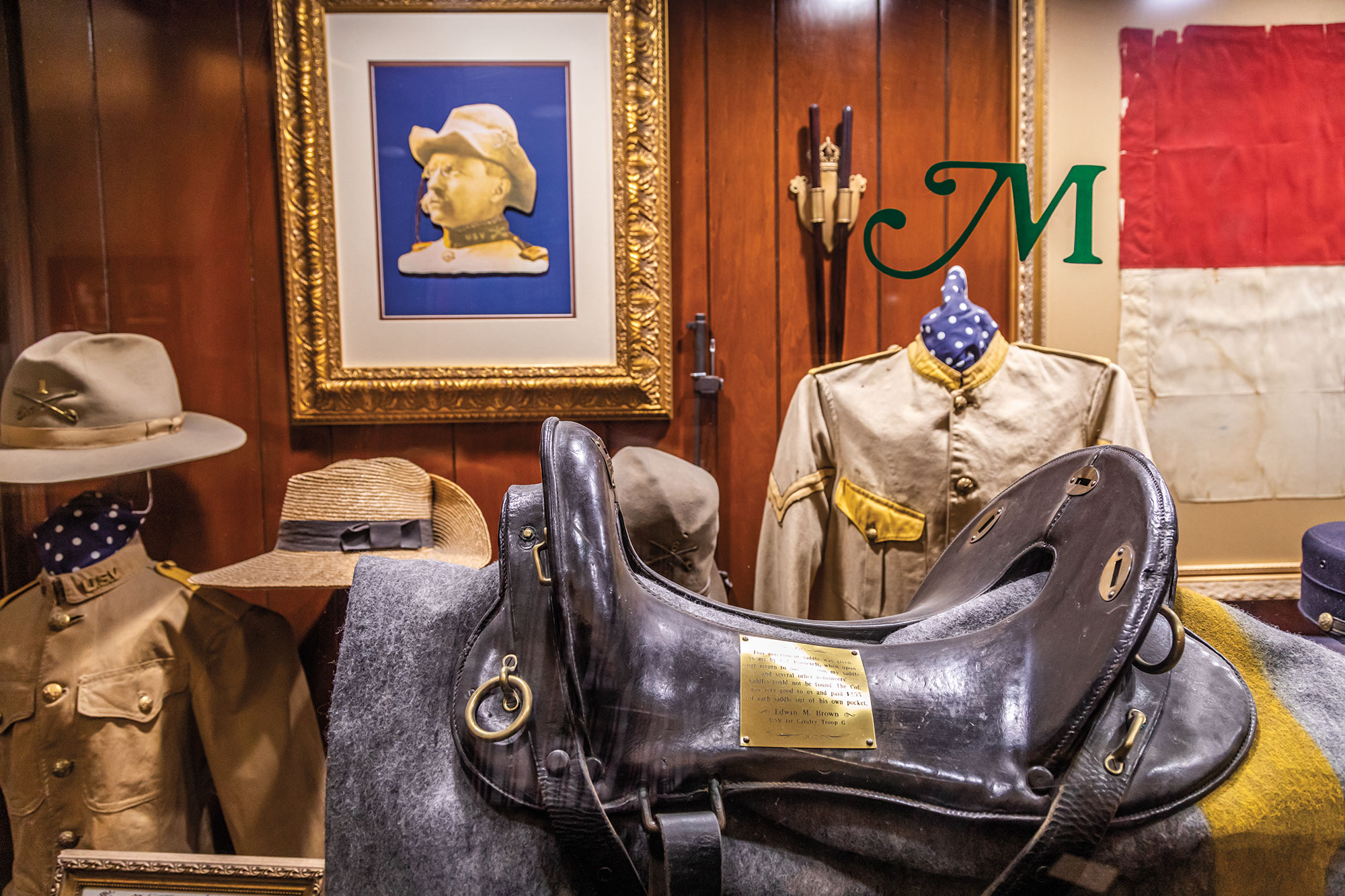 Meanwhile, in early 1898, the USS Maine sank in Havana Harbor, killing 262 sailors. Historians still debate whether a Spanish mine or a faulty boiler blew up the Navy vessel, but either way, the liberation of Cuba from the Spanish became an American rallying cry. Volunteers poured in to Wood’s camp not just from Texas, but also New Mexico, Arizona, and Oklahoma.

The volunteers included adventure-seekers of all stripes—cowboys, lawmen, Native Americans, and even Ivy League college graduates and scions of elite Eastern families. Many of them, like Roosevelt—a Harvard graduate raised in New York—sought fame and fortune. Dubbed the “Rough Riders” by a newspaper columnist, the soldiers trained at Camp Riverside, an area of San Antonio’s south side that’s now home to Roosevelt Park and Riverside Golf Course.

A few historical markers and tributes—Roosevelt Avenue and Roosevelt High School—honor Roosevelt’s time in the city, but the primary surviving link is the Menger Hotel, which opened on Alamo Square in 1859. Wood set up a recruiting post on the hotel patio, and Roosevelt and his Rough Riders often cavorted at the hotel bar. Reports in the San Antonio Light and elsewhere describe a cocksure Roosevelt and his regiment swaggering around the streets, raising a ruckus. In his book The Wilderness Warrior, Rice University historian Douglas Brinkley recounts Wood’s attempts to contain Roosevelt, including the time Wood upbraided the younger officer for buying kegs of beer for the volunteers.

Today, the Menger is home to several exhibits concerning the Spanish-American War and Roosevelt’s time in Texas. In the main hall of the hotel, framed newspapers celebrate the Rough Riders’ bravery while historical photos capture scenes of Roosevelt and his troops in camp, in Cuba, and in a later reunion in San Antonio. Display cases also show off weapons and flags, as well as banners, uniforms, and a bugle from the Spanish-American War. 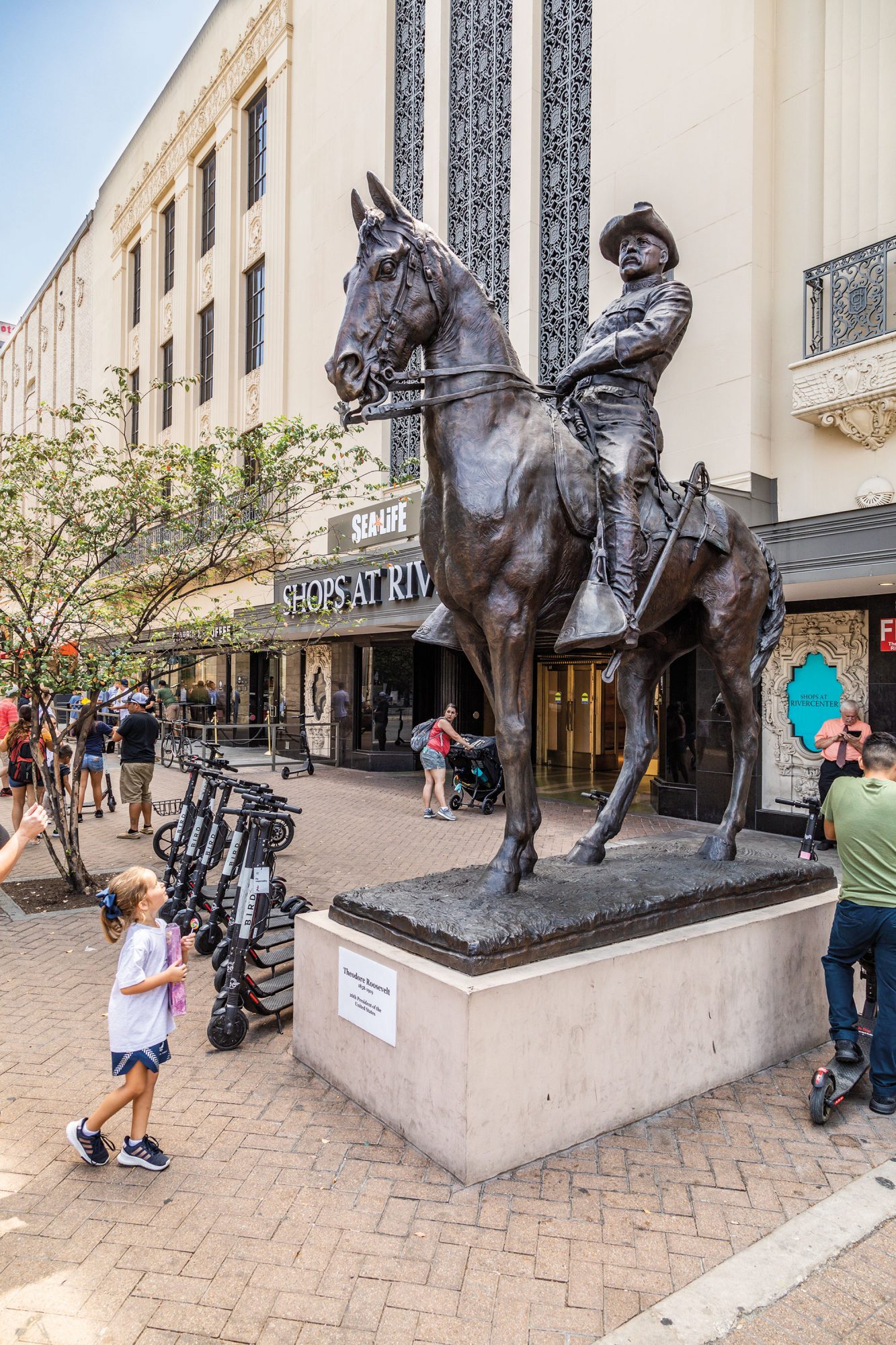 At the end of May in 1898, the battalion headed to Florida, and in June they sailed to Cuba. According to The Texas Ranger Hall of Fame and Museum in Waco, six Texas Rangers were among those who landed in Cuba. On July 1, Roosevelt mounted his horse (named Little Texas) and led the Rough Riders on a charge up Kettle Hill. Alongside several thousand members of the 5th Corps of the U.S. Army, the Texas-trained volunteers routed the Spanish.

Of the nearly 500 members of Roosevelt’s unit, 100 were either killed, wounded, or went missing, yet journalists lauded the effort. In the following weeks, the Spanish left Cuba and ceded Guam, Puerto Rico, and the Philippines to the U.S. in the Treaty of Paris. The Rough Riders became national heroes.

Riding his newfound fame, Roosevelt was elected governor of New York in 1898 and then vice president under President William McKinley. In 1901, he became president when McKinley was killed. After winning reelection in 1904, Roosevelt returned to Texas to attend a Rough Riders reunion. He paraded with several dozen veterans of the Spanish-American War, and during the same trip he visited the Texas Capitol with Gov. Samuel W.T. Lanham. A vintage photo at the Menger shows the men in black top hats in a horse-drawn carriage in Austin.

Reports describe a cocksure Roosevelt and his regiment swaggering around the streets.

During my San Antonio visit, I stopped by the Menger Bar to pay homage to Roosevelt’s legacy. With its finely carved cherry wood and antique French beveled mirrors, the pub has been an attractive place for a drink since it opened in 1887. Hanging in the barroom, a dramatic painting depicts Roosevelt astride Little Texas, leading a mass of charging soldiers, who are on foot, up Kettle Hill. The oil painting is a reminder of Roosevelt’s good fortune to have a horse in Cuba: Most of the Rough Riders landed on the island to find their horses had been left in Florida.

A couple from New York, fellow Roosevelt devotees, took a seat at the end of the bar, and the bartender gestured me over as he told them about the olden days. He pointed to a few pockmarks in the walls that were allegedly made by Rough Rider bullets. That was back when the West was still wild, and Cuba still belonged to Spain.

Sifting through the sands of history, I was struck that just as Texas made an impression on Roosevelt, he also made an impression on us. His success on the battlefield fused the contradictory identities of the statesman and the cowboy, and just as the American frontier closed, a new sort of Texas hero was born.

For San Antonio residents, Teddy Roosevelt will forever be linked with the Menger Hotel. That association grew even stronger this May with the installation of a bronze statue of the former president near the hotel’s Menger Bar.

The 12-foot bronze depicting Roosevelt on horseback in Rough Rider regalia is one of 14 statues planned for the “Alamo Sculpture Trail” between the Alamo grounds and the Briscoe Western Art Museum.

Michael Duchemin, president of the Briscoe Museum, says that while Roosevelt was born in New York, the sculpture still fits. “It highlights Roosevelt’s connections to the Menger, and the importance of San Antonio in his personal story, his path to becoming president, and our nation’s history,” Duchemin says.