Home Cookin’ on the Range 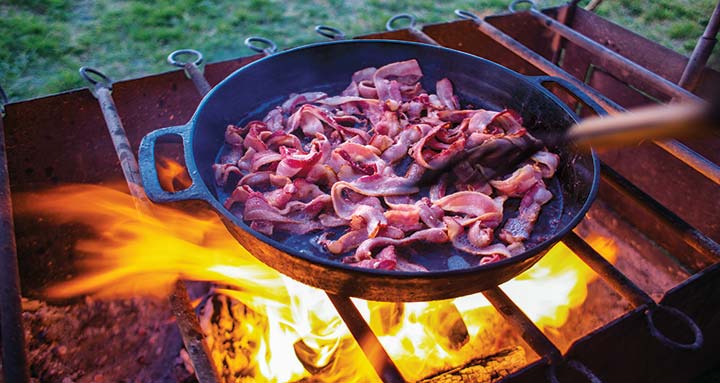 It’s bumper-to-bumper in Weatherford, and most everyone is smiling. Traffic moves at a crawl around the courthouse, its picturesque red cupolas reaching into an azure sky.

Find more information on the topic from the American Chuck Wagon Association and the Texas Chuckwagon Racing Association.

Following is information for events in the story.

The Red Steagall Cowboy Gathering & Western Swing Festival includes a Wagon Train and Trail Ride, which travels from Jacksboro to the Fort Worth Stockyards, on Oct. 18-22, 2015. The Cowboy Gathering & Chuck Wagon Competition will be held Oct. 23-25, 2015, at the Fort Worth Stockyards (the parade of chuck wagons participating in the cook-off takes place Oct. 23). Call 817/444-5502.

Other chuck-wagon events include the Texas Cowboy Reunion in Stamford in July, www.tcrrodeo.com; the Col. Charles Goodnight Chuckwagon Cookoff in Clarendon in September, www.saintsroostmuseum.com/events/chuckwagon-cookoff; and the Llano River Chuck Wagon Cook-Off in October, www.llanochuckwagoncookoff.com.

Among the museums in Texas that have chuck wagons on display are the Panhandle-Plains Historical Museum in Canyon; the National Ranching Heritage Center in Lubbock; the Museum of South Texas History in Edinburg; the Briscoe Western Art Museum in San Antonio; the Buggy Barn Museum in Blanco; and The Museum of Western Art in Kerrville. Learn more about cattleman Charles Goodnight at the Charles Goodnight Historical Center in Goodnight (part of the Armstrong County Museum).

Jay Patton stands up from his spring-wagon seat greeting everyone within shouting distance: “Howdy! Didn’t I see you here last year?” Westbound drivers lean out of their windows snapping photos, waving to the eastbound lanes as a quarter-mile-long line of heritage wagons moseys down US 180, their canvas tops and wooden wheels a wonderful anachronism. Gridlock has never felt so joyous as the Red Steagall Wagon Train drives through town on its way to the annual gathering at the Fort Worth Stockyards for a long weekend of Western Swing music, cowboy poetry, ranch rodeos, and one of the largest chuck-wagon cook-offs in the state.

An iconic image from the Old West, the chuck wagon still holds Texans’ fascination 150 years after it first rolled across the plains. There are year-round cookouts and cook-offs, trail rides, and, in true Texas fashion, competitions to see who has the fastest chuck wagon in the West.

Cattleman Charles Goodnight is credited with the creation of that first chuck wagon in 1866, when he outfitted a Studebaker military wagon to feed his team of 20 men driving 2,000 head of cattle on the trail from Texas to New Mexico. The Studebaker’s steel axles were sturdy enough to survive the trail. Goodnight added a chuck box with drawers for food supplies and a lid that folded down into a worktable. The boot, a storage space under the chuck box, carried the Dutch ovens and other kitchen utensils, and a wooden barrel with two days’ supply of water was strapped to the side of the wagon with other tools and spare parts. A dried cowhide hung below the wagon box transported firewood, and when wood became scarce on the trail, cow chips from the herd were dried in this “possum belly” to provide fuel for the cook’s fire.

From the mid-1860s to the 1880s, more than 10 million head of cattle walked the trails from Texas to markets in Kansas, Missouri, Colorado, and Wyoming. For the two to five months the men spent on the trail, the chuck wagon was their “home on the range.” Their bedrolls and personal belongings traveled in the wagon, all of their meals were served from the chuck box, and they socialized around the cook fire. The chuck wagon caught on with other outfits, and by 1884 Studebaker offered the “Round Up” model, a wagon created specifically for ranch life and trail drives with Goodnight’s original additions.

By the late 1880s, the railroad had eclipsed the trail as the most profitable way to move cattle to market. Despite its brief life, just 20 years, the cross-country cattle drive has remained an enduring image of the American West—so much so that in 2005, Governor Rick Perry signed a Senate resolution designating the chuck wagon as the official vehicle of Texas, ensuring the legacy for generations to come.

For a literal taste of that history, I head to the Lubbock Memorial Civic Center on a September weekend for the National Cowboy Symposium, where a dozen chuck wagons form a horseshoe in a park across from the center. It’s before dawn on the day of the cooking competition, and the glow of cook fires welcomes visitors as the aromas of coffee and bacon rise in a warm draft. Farris Hightower is in charge of feeding the volunteers this morning. The biscuits are cooking in a Dutch oven on hot coals, and he gives them a gentle quarter-turn every few minutes, ensuring a light-brown crown and a fluffy white center. 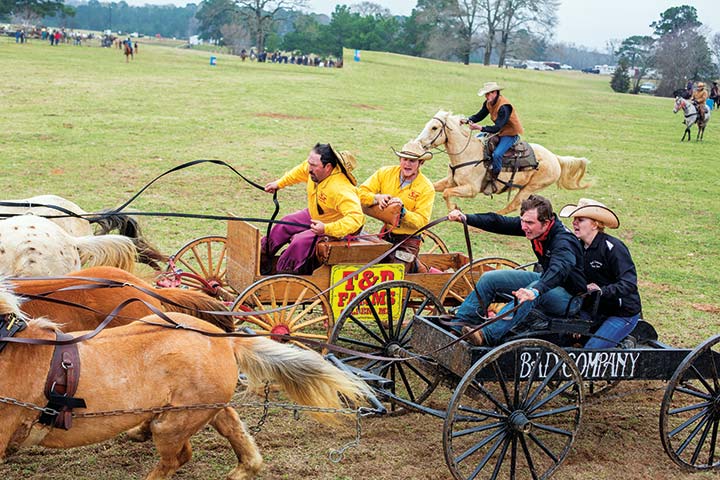 A few wagons down, sisters Sue Cunningham and Jean Cates are sorting through their chuck box, removing any modern cooking implements or ingredients that will cost them points in the judging. Sue and Jean grew up in Channing with a chuck-wagon cook for a father. In 1992, the pair became the first all-female team to win the Western Heritage Classic Cook-off in Abilene. They went on to win the American Cowboy Culture Award and were named chuck wagon of the year by the Academy of Western Artists, and later published three chuck-wagon cookbooks. With their signature aprons and black hats, the pair talks recipes and “war stories” as they prepare their wagon for competition.

Visitors to the fairgrounds stop in to take pictures and chat with the competitors, who flit about in a constant buzz of activity. Each is part historian, quick to share the details of his or her wagon and the era, and part chef, attending to the fires and authentic pots, cast-iron pans, and ingredients that chuck-wagon cooks used in the Old West.

Camp competitors are scored on the authenticity of everything—the wheels “wooden and in drivable condition,” chuck box made of “regular lumber (no plywood),” cookware of “copper, brass, graniteware, and cast iron,” flatware of “old German or nickel silver, steel, or steel with wood or bone handles,” tools including a “heavy hammer, single bit axe, a two-man crosscut saw or bow saw, a brace and bits, and a drawing knife,” bedrolls that “must be canvas,” and the overall appearance of their camp, including the fire trenches dug with period shovels.

At the Lubbock event, cooking contestants are issued the ingredients for the different categories of foods that will be judged in the competition—meat, beans, potatoes, bread, and dessert. Teams of four use only their chuck-wagon camp tools to prepare lunch for 50 people, including judging samples, ensuring a delicious meal for visitors who purchase a meal ticket.

As the judges deliberate, I devour a meal of chicken-fried steak, red potatoes, gravy, bread, beans, and a sweet peach cobbler so tasty that I consider a second serving. Some of the competitors here run Old West catering businesses from their chuck wagons during the rest of the year, and their expertise is evident in the appreciative yums and groans of pleasure from my dining companions.

After the results are in, I return to Sue and Jean’s camp. They’re happy with a win in beans and dessert and a second place overall, but are always striving to be the champions. Their disappointment is tempered by the promise of another accolade coming up in a few weeks, when they will be inducted into the National Cowgirl Hall of Fame in Fort Worth.

Cooking and historical authenticity are just the tip of the iceberg in chuck-wagon competitions, however. Almost from the time of their invention, chuck wagons were pitted against each other in that grand tradition of naming the fastest in the West. Cookies, as the cooks were nicknamed, might face off for the entertainment of their crews during a big roundup, but these days the stakes are higher and the speeds much faster than anything they could have imagined in the 1800s.

On a chilly spring day last March I drove through the gently rolling piney hills of Anderson County toward Palestine, in the northeast corner of the state. Every year around Texas Independence Day, the Diamond B Ranch hosts the 1836 Chuckwagon Race, where teams from across the country race against each other for bragging rights and prizes, creating one of the more entertaining spectacles a Texan can witness.

There are five size divisions of chuck-wagon racing—Oklahoma Land Rush, Four Up Mules, Buckboard, Big Mules, and Classic—each with different requirements for the size of the wagon, the team, and the race track. Wagons drive at breakneck speeds around an open course, vying to be the first across the finish line. But this is no simple drag race. Each chuck-wagon team—usually a cook and driver and a team of horses and/or mules—has an outrider who must load a “stove” (a small box with a rope loop on it) into the wagon at the sound of the starting gun. The cook must load up a “tent” (a rolled-up towel). As the wagon teams take off, the outriders mount their horses and must cross the finish line ahead of their speeding wagon teams for a qualifying time. As horses and mules top speeds close to 30 mph, outriders have to hustle.

Spectators at the Diamond B watch from the sidelines wrapped in blankets and smiles. Dirt and dust fly up from four wagon teams as they pivot around a barrel and take off at a dead run to the loop in the middle of the track. Drivers yell and whoop for a little more get-up from the mules. Some blast air horns. Cheers rise up as an outrider makes a last-second come-from-behind sprint, giving his outfit a qualifying time by a nose.

Organizer Moon Swanson has added bronc fanning, team roping, and cowboy-mounted shooting to round out the family-friendly weekend on their sprawling property. An Army veteran, recently returned from Afghanistan, rides his first bucking bronc in front of the crowd. Despite the light drizzle, visitors to the Diamond B cheer from beneath umbrellas and ponchos as he fans the horse with his hat.

The winners here take home some prize money and fancy belt buckles. As the wagon wheels fly by, I like to think this newest incarnation of chuck-wagon competition would have made Charles Goodnight smile. What started 150 years ago as a practical invention has found a permanent place in the national psyche out of love for a bygone era.