There's no wanderlust for the balladeer that loves being in Texas 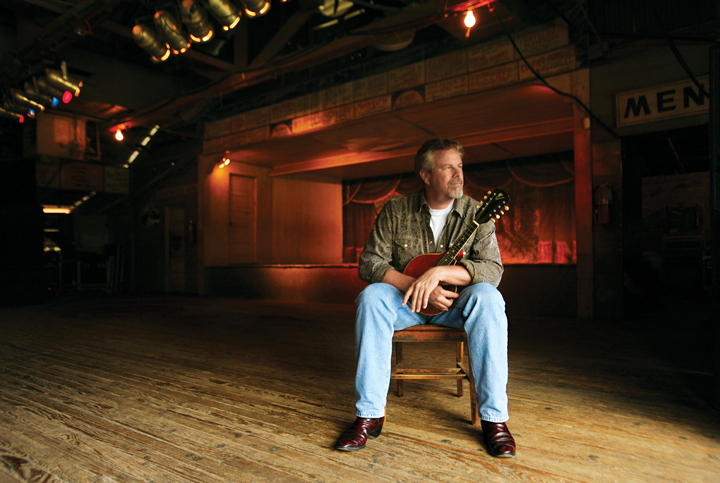 One of the first things you notice about Robert Earl Keen is that he talks the way he writes. The balladeer—whose iconic song “The Road Goes On Forever” marks its 20th anniversary this year—is sitting under a tree outside The Zone recording studio in Dripping Springs, some 100 miles east of his home near Kerrville. The wind’s whipping, the sun’s shining, and he’s reflecting on life, how good it is, and about the good, big year he’s living. As he talks, he spins yarns in his innately cadenced way, unfurling narrative as he goes.

The 53-year-old Houston native is indeed having a good year. The University of Texas Press recently published his book The Road Goes on Forever and the Music Never Ends. Keen’s creative team is working on a documentary called The Year of the Road, which features fans’ own tales about “The Road Goes On Forever” and the song’s effects on their lives. In January, he saw the release of a two-disc tribute album (Undone: A MusicFest Tribute to Robert Earl Keen), recorded live in Colorado by a slew of new-generation songwriters who revere his music. And the songwriter garnered what you might call a Grammy-by-association, when George Strait’s Troubadour—which includes a song written by Keen titled “West Texas Town”—won Best Country Album. 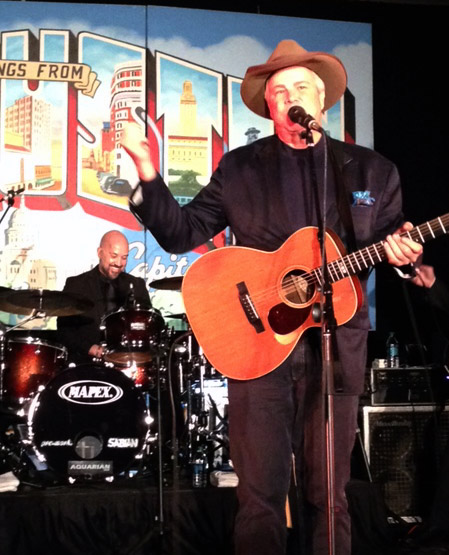 Keen is excited about where the road has led him: the 2009 tour, the ink from
major newspapers, the outpouring of love from fans, and the record he’s working on with powerhouse producer and musician Lloyd Maines, due out sometime this year. Despite all that, one of the things Keen enjoys talking about most is Texas.

BASS: Can you share some memories from childhood about growing up in Houston?

KEEN: We [Keen and his sister] grew up [during what I call] the bright, shining
age of Houston, in the late ’50s and early ’60s, when the space program was
beginning and the oil business was rocking. Anybody who was involved in oil
was just the coolest person on the block [his father was a petroleum engineer].
I remember “Go Texan Day” in Houston, which was the first day of the rodeo and the day the Salt Grass Trail Ride would end up in town. I used to keep a picture in my wallet of me when I was about three, wearing one of those little felt cowboy hats and holding my parents’ hands as we walked down to the rodeo on Go Texan Day.

Bass: What is it that makes Texans Texans? Do you think it’s some intractable sense of place?

Keen: Growing up, there was always “Texas” and “The Rest of the World.” You got this idea—or I did, early on—that there really was no other place, no other option, besides Texas. I never really had that wanderlust like some people. I’m even surprised at Texans who get up and leave and don’t come back—like, say, Tommy Tune or T Bone Burnett, people who have made a home somewhere else. I’m always thinking, “Well, I betcha when they get about 70, they’ll come back here.” And a lot of people do.

Bass: Is it the landscape?

Keen: The sense of place here, for me, has always been about openness—not only the landscape, but the people. It always seems a little more edgy, a little more frontier-like, in Texas.

Bass: Tell me one thing that’s unique to Texas.

Keen: The truth is, in music and in rodeo, a person can make a career here and never leave this state. Pretty amazing.

BASS: Talk a little more about where you grew up and how that inspired you as an artist.

KEEN: Well, my parents had a little place outside of Frelsberg, and we went there almost every weekend and spent time cleaning up the place, cutting cedar trees, running around. There was a little creek behind it, and we had some old horses. [Those memories are] a big part of my whole need to be outdoors [today]. I always feel claustrophobic in places where I can’t get out in the open. Also, we used to stop in Richmond at Larry’s Mexican Restaurant, and that was where I wrote my first song. It was a tribute to the restaurant, to the tune of “She’ll be Coming Round the Mountain.” In it, I listed pretty much all the food that I liked there.

KEEN: I’d have to say [Larry] McMurtry. I love McMurtry—because he works hard at it, I think. He always works hard. I think that some of his first books—Leaving Cheyenne and Horseman, Pass By—those are just … [he leaves the adjective blank]. I’ve read most of his stuff over the years. I think he’s just a great writer.

Bass: What musicians, in general, have influenced you, outside of country music?

Keen: Growing up, I was a fan of pop music. I liked the Beatles—and I know I can’t even go into this—but I liked Cream better than the Beatles. [He flashes a mischievous grin.] I went to see a Cream concert when I was 12—we snuck in and snuck backstage, and they kicked our butts out. But it was a great concert.

Bass: Jumping back to Texas … what’s one of your favorite stretches of road?

Keen: If you go from Kerrville to Medina on [Texas] 16, it’s a really nice drive, and I’m talking about any time of year—winter, summer, fall. For another scenic trip, you can go west toward Vanderpool, and then, if you’re dying to do it, you can go on up to Lost Maples [State Natural Area]. I know that’s almost a cliché, but [that area] never gets tiring, never gets old.

BASS: What’s a good dive bar in this state? [We agree it’s kind of a stupid question, but he humors me.]

KEEN: My favorite dive bar would be Arkey Blue’s Silver Dollar in Bandera. It just serves beer; you can bring in your own bottle and order a set-up for a dollar or whatever. You go in there, and you’ll see people who have their bottles in a bag or some plastic thing with their ice in it. It’s really like walking back in time.

BASS: Okay, sticking to nightlife, what would be your favorite dancehall?

KEEN: I went to every dancehall within a hundred miles of Columbus when I was growing up, but a lot of those are closed now. So I’d have to say my favorite dancehall to play would be Floores Country Store, outside of San Antonio.

BASS: What about your favorite barbecue?

KEEN: What are you doing … ? Am I gonna get a lot of [grief] for saying this … ? Well, let me tell you about one that nobody ever mentions in the  magazines: Billy’s Pit Bar-B-Q in Bastrop is awesome. Everything is really, really good. One of my favorites from childhood that’s still there is the Hickory Pit, on Rice Avenue, in Bellaire.

BASS: What would you order at the Hickory Pit today?

KEEN: The Hoffbrau in Austin would be my steak place, definitely.

Bass: You’ve been touring for 30 years now; tell me one of your favorite memories of playing in Texas.

Keen: Well, one time I was playing in Dallas, and I got a cab over to Poor David’s Pub. I had this Nigerian cab driver, and he had this great accent, and he was talking about how he liked Dallas and Texas, and how driving a cab was not exactly what he wanted to do, but it was okay. He said, “I just want to get where I am very happy.” He asked what I did, and when I told him I played music, he said, “Oh, I love music. It makes you very happy. I love music.” And then we pulled up to Poor David’s, and the place was sold out and there were people standing out on the street trying to get in. He said, “Is this where you play?!” I said, “Yeah,” and he said, “Oh, you must be so happy!” [Keen’s voice has an emphatic, boyish tone.] And I said, “You know what, you’re right. I am so happy.”