All aboard the Ryan Express 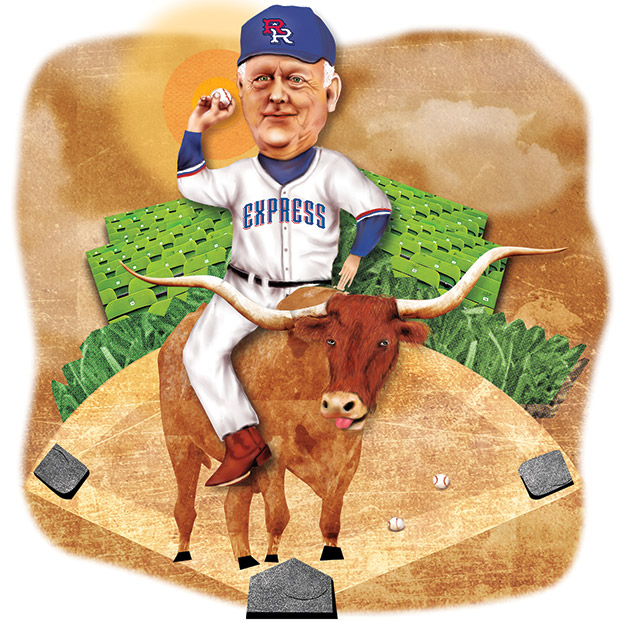 Nolan Ryan doesn’t pitch much these days, unless you count the occasional honorary first toss, bits of sage advice for up-and-comers, and games of catch with his grandkids. But the legendary Texas fastballer keeps plenty busy with his business pursuits, drawing on the same energy and competitive spirit that made him a first-ballot Hall of Famer after he retired from a 27-year major-league career—including nine seasons with the Houston Astros and five seasons with the Texas Rangers—in 1993.

Now a resident of Georgetown, Ryan is an executive adviser to the Houston Astros, where his son Reid is the president of business operations. Ryan is also principal owner of the Round Rock Express, the Texas Rangers’ Triple-A affiliate; an investor in the Nolan Ryan All-Natural Beef brand; and a cattle rancher with operations in Brazoria, Gonzales, McMullen, Live Oak, and Sutton counties. “As long as I can remember, I always was interested in the cattle business and wanted to be in ranching,” he says.

It’s been a thrilling journey for Ryan, the youngest of six children growing up in Alvin, where his mother cared for the brood and his father worked as a supervisor for Pan American Petroleum. Alvin was the original home for the Nolan Ryan Foundation, which raises funds for children, education, and community development. The foundation is moving to Round Rock this year, and its companion museum, the Nolan Ryan Exhibit Center, became part of the Texas Sports Hall of Fame in Waco in March. The display chronicles Ryan’s life and career with memorabilia like early scouting reports, uniforms, and baseballs from his each of his seven no-hitters.

The “Ryan Express” recently took a few minutes to discuss his life in Texas and the game he loves.

Q: How was growing up in Alvin?
A: During the period of time that I grew up in Alvin it had a very small-town atmosphere—it was a community of 5,000 to 7,000. The fact that it was a small town meant that you knew so many people, and so many of your activities were centered around the school and youth sports.

Q: While playing out of state, did you seek to take your career back to Texas?
A: We had continued to make our home in Texas in the off-season, and so when I had the opportunity to become a free agent and sign with Houston, I did that by design, so that we could continue to live in Alvin. Our children were getting to be school-age.

Q: What’s your perspective on the strength of the game and its popularity in Texas?
A: I’m really pleased with the growth of baseball in Texas over the years and the competitiveness we’ve seen now between the Texas Rangers and the Houston Astros. I think it [the Astros joining the Rangers in the American League West in 2013] has created a good rivalry here within the state and also gives the fans an opportunity to see both Texas teams now in the same division.

Q: What is your favorite Texas ballpark?
A: I think we’re very fortunate that we have both the stadiums, the one in Arlington and the one in Houston, but I think that because of the heat in Texas, the roof gives the fans in Houston the opportunity to have a lot more comfort as far as sitting through ballgames, so I really feel like from a fan standpoint that the nod would have to go to Minute Maid.

Q: When you travel for leisure or recreation in Texas, where do you like to go?
A: Well, it depends on the season. In the late winter or early spring I think Big Bend’s a great place to go before it gets too hot. And then in the early summer, I like to go to Port Mansfield and fish or go to Port Aransas to the beach. And then I enjoy going to the Hill Country, whether it’s the Fredericksburg area or elsewhere.

Q: What are some of your favorite Texas restaurants?
A: One of my favorite restaurants in San Antonio is Bohanan’s. I think their steaks are awfully hard to beat. And the same with Del Frisco’s in Fort Worth. And in Georgetown, The Hollow, right on the square. The menu changes every night, so it depends on what they’re featuring on the menu.

Q: When will a Texas team finally win the World Series?
A: You know, once you get into the postseason, you never know how they’re going to do, because it really depends on what team offensively gets hot. It has to do with which team is the healthiest as far as injuries are concerned, and also which team has the strongest front-line pitching, because in a short series your first and second starters have a real impact on how well you do in the postseason. It’s hard to predict, but there are obviously some teams that have more depth in their lineup and that certainly plays a role. When I look at the Astros and Rangers ball clubs, I think that they have a chance to get into postseason. But do I look at them as exceptionally strong teams? No.