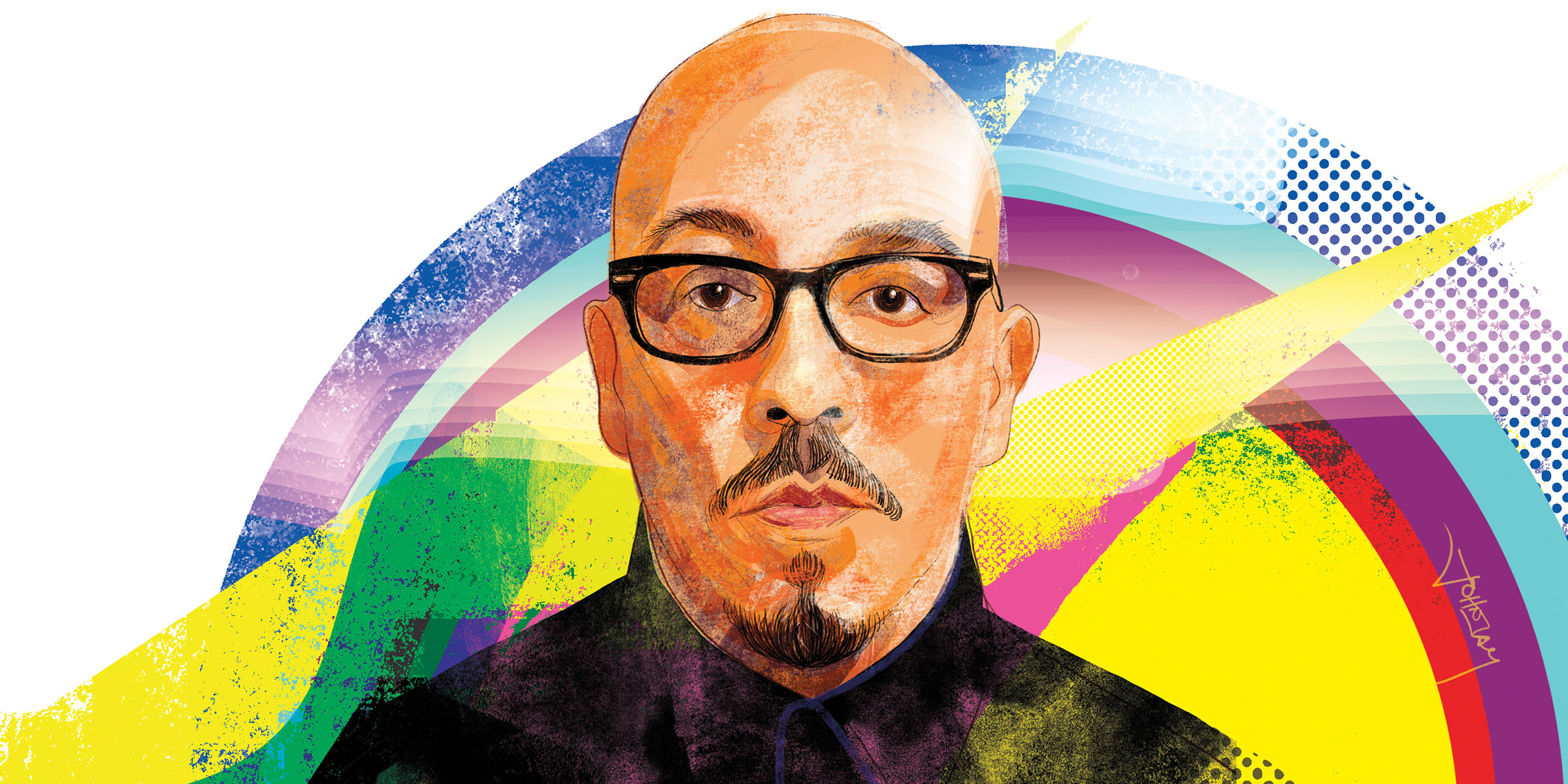 For nearly a decade, Shea Serrano spent his days teaching science to unruly middle schoolers in Houston. Whenever he found a spare moment, the San Antonio native wrote for the Houston Press, The Village Voice, Complex—anyone who’d cut him a check for his take on topics such as coaching middle school football or Texas hip-hop. His wife, Larami Serrano, a former teacher, wasn’t working because daycare costs for their twins were about as much as her salary. So Serrano wrote for extra money to help feed his growing family.

Then in 2015, Serrano took a leap of faith: He quit teaching and began writing full time. Grantland, the pop culture and sports blog, hired him as a staff writer, and just months later, it shuttered. Since then, his irreverent prose and affable Twitter presence have cultivated legions of fans online, particularly among 20- and 30-somethings. They’ve lined up for book signings; tuned into his podcast appearances at the sports and culture website The Ringer (where he’s a staff writer); and helped raise funds for charitable causes. In April, Serrano led an effort on Twitter to raise $100,000 in a single day to help the San Antonio Food Bank cope with growing demand during the coronavirus pandemic. Serrano’s books—whimsical musings about rap, basketball, and movies—have propelled him to The New York Times bestseller list for 2015’s The Rap Year Book, 2017’s Basketball (And Other Things), and most recently 2019’s Movies (And Other Things). He and Arturo Torres—the Dallas-based artist who illustrates Serrano’s books—are the first Mexican Americans to ever hold this honor three times.

Q: How did life in San Antonio shape your career?
A: I actually wrote about this exact thing in Movies (And Other Things). In San Antonio, Selena was huge. It was like our version of Star Wars. People were literally sleeping outside of movie theaters so they could get tickets to the first showings. I assumed it was like that everywhere. But it wasn’t. Lots of people in lots of other places had never even heard of it, or of [Selena Quintanilla-Pérez] at all. And that’s crazy to me, but it also makes total sense. It’s the same as how [the hip-hop duo] UGK is deified in the South, but lots of people in, say, Maryland don’t care about them. Where you’re from shapes the things you see and the things you know, which in turn shapes how your career plays out.

Q: Why has the movie Selena endured?
A: No. 1, Selena is still—all of these years after her death—an important part of our culture. We still listen to her music all the time. You can’t walk around in San Antonio without seeing a Selena T-shirt. We got Selena grocery bags at the store. Like, that’s a thing. Her family put out makeup. She’s just such a big part of our culture. Of course we’re going to hold on to this movie and celebrate it.

“In San Antonio, Selena was huge. It was like our version of Star Wars. People were literally sleeping outside of movie theaters so they could get tickets to the first showings. I assumed it was like that everywhere.”

Q: In Movies (And Other Things) you nominate two scenes from Selena into your imagined “Mexican Movie Hall of Fame”—when fans mob Selena in a mall after a sales associate disrespects her; and when Selena’s father (played by Edward James Olmos) talks about how difficult it can be for Mexican Americans to fit in. Why those?
A: Hearing Edward James Olmos explain the dilemma of being a Mexican American in America—that was really smart writing and great acting; it was a beautiful moment. And the one with Selena shopping—that was the time when the Mexican got to be the hero. We had never seen that before in a movie. Because this had happened to me: You walk in, and you don’t get the service you think that you should, or somebody makes a comment about you. Even in movies where Mexicans are cool—like in Blood In, Blood Out—you’re like “oh that’s cool,” but they’re still doing criminal activity. In Selena, it’s straight-up like, she’s in here, she’s successful, she’s in town for the Grammys, she’s gonna buy whatever she wants because she’s not poor. And she gets to put it in this woman’s face who has no idea what’s going on. It was this new thing to watch.

Q: Which movies do the best job of depicting life in Texas?
A: There’s a bunch of different types of lives in Texas. I’m sure somebody will watch Friday Night Lights and be like, “That’s what my life looks like.” Small town. Everything peaks when I’m 17 years old. I’m sure there’s a version of that. There’s another version that watched Selena and was like, “Oh yeah, that’s what it looks like for me.” There are definitely movies where you watch them and go, “Oh this is probably what everybody outside of Texas thinks of Texas,” like Hell or High Water. They probably think that’s what all of Texas is, but there’s no place you can go in Austin that feels like that.

Q: You moved back to San Antonio in 2018. When you have visitors, where do you like to take them?
A: Whenever someone comes to San Antonio they wanna know, where am I supposed to go eat? I prefer a little Tex-Mex food over every other food. We go to this place called Mendez Cafe, which is over on the Southside. It’s run by the Mendez family, and they have the best tacos in the city if we’re talking about bean-and-cheese or carne guisada. And the other place that we go to is Blanco Cafe, which has incredible enchiladas. That’s one of the spots I gotta take somebody whenever they show up.

Q: Which is the better Friday Night Lights—the movie or the TV series?
A: The best Friday Night Lights is definitely the TV show, specifically Season 1. There are a lot of fun moments in that one, but also some emotional kicks as well. The movie’s really good. Billy Bob Thornton does a good job. The scene where Boobie has a breakdown in the car, I remember watching that and actually tearing up in the theater, when he was just like, “What am I gonna do now?” It was heartbreaking. But, I think it was a little too sad to be my favorite. It was a little too real. In Friday Night Lights the TV show, every once in a while you get coach Taylor pumping you up. Give me that one.

Q: Where do you like to travel in Texas for fun?
A: We go to Corpus every so often, or Galveston. There are a couple of little swimming holes between San Antonio and Austin that we like to hit up. We’re just trying to find water. We’re a water family.

Q: You taught at a low-income school in Houston. What do you think of the state of education in Texas?
A: I think the same thing I think about it anywhere: It should be better. It seems like we have all the resources to make it better, but it just doesn’t happen. It doesn’t make any sense to me that the people who are responsible for taking care of our children basically all day, every day, teaching them the things they’re supposed to know, the skills they need in life, they make $33,000 a year in some cities. It’s stupid. My children, my actual children, their teachers see them more every day than I do.

Q: If you were going to introduce somebody to Texas rap music, where would you start?
A: If we’re talking about from a historical aspect, I would start with UGK. I think they’re the most influential, important rap group out of Texas, even though Geto Boys showed up a little before them, and Geto Boys had Scarface, who is probably a top 10 all-time rapper. UGK was more formative in my life. Ridin’ Dirty was one of the first albums I ever listened to. So, I would start there. If we’re talking about who’s doing it now, like who would be on my team of trying to prove Texas has the best rappers in America today, I would think of Megan Thee Stallion and Maxo Kream. This is like my starting point guard and shooting guard, and I’ll build my team around them.

Q: Who would play Coach Pop, Tim Duncan, and Kawhi Leonard in a movie about the San Antonio Spurs?
A: I would cast Michael Shannon as Pop—we’re gonna old-face him up a little bit. Tim Duncan, you’d need a big guy… You know who I hear is getting into acting a little bit? Chris Bosh. So let’s give Chris a shot, he seems like a charming guy. And then for Kawhi, I have no idea. Anthony Mackie? We’ll go with the new Captain America, seems like a good idea.