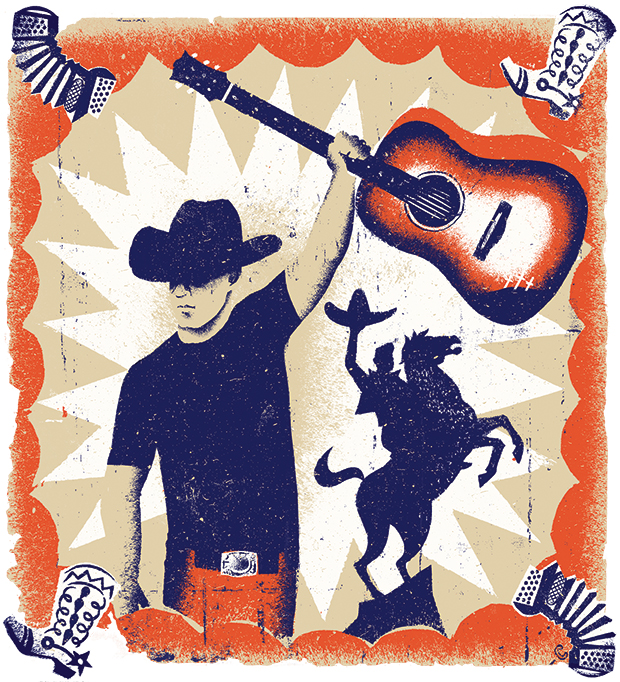 Ever since the 1999 debut of his first album, Singer/Songwriter, country crooner Aaron Watson has been blazing his own trail up the charts with songs that draw from his hometown roots and Texas musical heritage. Watson began writing songs and playing guitar as a teenager in his hometown of Amarillo. After attending Abilene Christian University, he ventured to Nashville to try his luck with the major record labels. But the labels told him that his sound— modern honky-tonk with splashes of rock, gospel, and Tejano—lacked commercial appeal.

Keep up with Aaron Watson’s touring schedule and other news at www.aaronwatson.com.

Spurred on by this rejection, Watson returned to Texas to make music on his own terms, recording 13 albums that he released independently. These days, Watson lives in Abilene with his wife and three kids when he’s not on the road to support an extensive touring schedule.

Watson’s polished style has attracted a growing fan base that has taken him to new heights as an independent country artist. In 2015, his album The Underdog debuted at No. 1 on the Billboard Top Country Albums chart, a first for an independent male country artist. This success led to his Grand Ole Opry debut in Nashville in 2015.

In 2017, Watson released his latest album, Vaquero, which debuted at No. 2 on Billboard’s country chart and hit No. 1 on Billboard’s Independent Albums chart. Watson says the title Vaquero, as well as the accordion that accompanies some of the songs, is a nod to Tejano culture. With topics ranging from trusty old boots to true love and the Texas-Mexico borderlands, Watson shares with the world his experiences and observations about life in the Lone Star State.

Q: What was it like growing up in Amarillo?

A:Amarillo has a lot of wide-open spaces and a slower pace of living. Waylon Jennings was from the Panhandle, and so were Buddy Holly, Joe Ely, the Maines Brothers Band—a lot of great music. Amarillo is off the beaten path, and those long stretches of blacktop highway are good for one thing: to get anywhere, you spend a lot of time driving with the radio cranked up and singing at the top of your lungs. I remember a lot of that growing up—dreaming and driving.

Q: What do you miss about your hometown?

A: I grew up going to Palo Duro Canyon State Park, and also to Doug’s Bar-B-Q. I’ve been getting the same thing there since the ’80s: two sausage sandwiches and a bowl of beans. My mom used to take me there in a stroller.

Q: What does it mean to be an independent artist?

A: Every label in Nashville turned me down. At some point, you stop listening to their discouragement and rewrite the rulebook. I set out to prove them wrong, and I’m still proving them wrong. I always wanted to be independent in terms of my musical freedom. Being an independent artist means that I’m the CEO and the custodian, the receptionist and the record producer. I ride a horse named Hustle. Sometimes it’s hard to get played on the radio because people are still following the old business model, but times are changing. A lot of people are buying music digitally now.

Q: How does Vaquero compare to your previous albums?

A: After The Underdog, people said I needed to get away from the Texas theme to have more mass appeal. So to show them that I won’t change, I put out Vaquero. The entire album is unapologetically Texan. It’s all things Texas—and all people. I love being able to shine a light on my beloved Texas music, and you can’t talk about Texas music without talking about Tejano music. Vaquero is Spanish for cowboy. The cowboy is timeless, and so is the sound. It’s good to always try to improve, but you should never forget where you came from.

Q: Where do you go to hear music?

A: In the past few years, I’ve toured to 40 states and 10 countries in Europe. You don’t get to go hear music when you play 150 shows a year, but you get to share the stage with lots of different artists. When I’m in South Texas, I get to share the stage with Tejano bands, and I love it. It’s not about the venue, it’s about the people—all different flavors of people. Every region is special. I get to see Texas from the window of a tour bus and experience the whole state. There’s no place like it. When I’m not on tour, I’m home with my family, where I like to listen to my daughter practicing the piano and my boys playing guitar. My favorite music is the sound of their laughter.

Q: What places do you recommend around Abilene?

A: In Buffalo Gap, I like the Perini Ranch Steakhouse. They have good steaks and quail legs, and I love the bread pudding and jalapeño cheesecake. In Tuscola there’s the Lone Star Cafe, which has the best chicken-fried steak around, and I always get the buttermilk pie. There’s also the Homeplace Diner, which is in an old farmhouse. It serves Southern food, but it’s only open on Sundays after church. And there’s Vickie’s, which has hamburgers, chicken fingers, and a great rib-eye steak sandwich.

A: I’m just going to keep putting one foot in front of the other, and I reckon I’ll start working on the next album. I’ve already got some ideas.