Written by Art Williams, Photographs by Laning Photography | From the September 2015 issue | Updated: August 14, 2015 | Filed Under: made in texasPeople 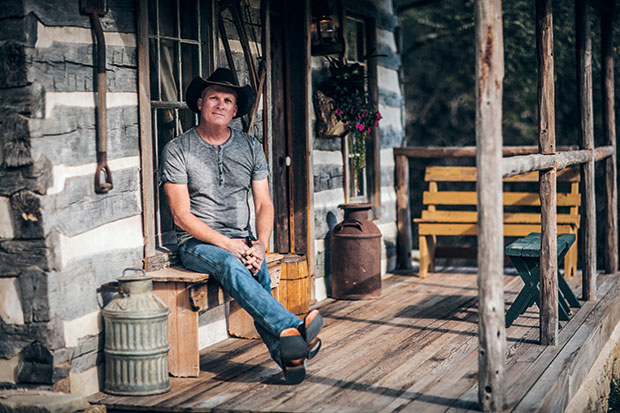 Kevin Fowler goes for a good love song as much as the next red-blooded country music singer-songwriter, but you need only look at his song titles to understand the brand of country he likes best: “Beer, Bait and Ammo,” “Loose, Loud and Crazy,” “Girl in a Truck.” Fowler has made his name in the contemporary sub-genre known as Texas Country with catchy, good-timin’ anthems that celebrate huntin’ and fishin’, country girls, and cold beer.

A native of Amarillo, Fowler studied guitar and songwriting on the West Coast before arriving in Austin in 1991. He first played guitar in the popular hard-rock band Dangerous Toys, then fronted his own Southern-rock group Thunderfoot. But in 1998, he returned to the country music he’d grown up with, which he plays with a rock edge.

“I’ve played all over the world, and I’ve seen no place on the planet that has a dance-hall scene like we have here.”

While Fowler is in high demand these days on the fair-and-festival circuit, he developed his country career in the legendary dance halls of Central and South Texas. Rural Texas towns once revolved around these halls, with their clapboard-and-corrugated-tin construction, friendly old-timers, Spartan furnishings, and wooden dance floors that shine like military uniform buttons on inspection day. Dance halls remain close to Fowler’s heart—so much so that he does an annual statewide tour, from Thanksgiving weekend through New Year’s Eve, called “Deck the Dancehalls,” during which he plays as many of them as he can. (Dates for 2015 were pending at press time.)

“All the historic dance halls offer the same experience, and that’s the cool thing about them; they’re a step back in time,” he says. “I’ve played all over the world, and I’ve seen no place on the planet that has a dance-hall scene like we have here.”

Asked to give the lowdown on his favorites, Fowler invited me to Rustic Ranch, his spread outside of Wimberley where he’s collected and restored several historic buildings. So, we conducted the interview in … Fowler’s dance hall.

“This place just reeks of history and tradition,” Fowler says. “You look at the photographs on the wall and everyone’s played there: Hank Thompson, you name ’em; you feel like you’re part of country music royalty. They have one of the best dance floors in the state, and they take good care of it.”

Old Coupland Inn and Dancehall, Coupland (est. 1992 as a dance hall; originally built in 1904 as the town drugstore)

“This one has the restaurant and the old hotel,” Fowler says. “You go into that hotel and it’s really cool; everything there is still specific to the old days. People come to dance and drink beer, but it’s multi-generational, everyone from the kids to grandma and grandpa, eight to 80. Coupland was probably the first place I saw little kids sleeping on the tables and benches when it got late, but as I learned, it’s like that at all the dance halls.”

“The Easley family bought this about five years ago, and they did a great job restoring the dance hall without hurting the feel of the place; the floor is incredible. The general store is still there, too, only now it’s more like an icehouse. Every time we’ve been to Albert it’s always been full, and there’ll be a lot of people hanging around outside as well, under these big old live oaks. They don’t do as many public dances as they used to, but they do a lot of weddings there now.”

“You talk about history and nostalgia, this one started out in the 19th Century as a meeting hall, and it’s still going strong as the community center,” Fowler says. “The dance floor is dark oak and it’s huge. No tables around the dance floor, just benches. They’ve got high ceilings, arched beams, and some of the coolest woodwork you’ve ever seen, and they’ve still got polka bands and country bands playing there regularly.”

“I’ve never played this one, but I was there for a friend’s wedding recently and it is great. It’s near Castroville, at the end of a little road that was still dirt until just a couple years ago,” Fowler says. “The road is lined with all these tall trees so it’s dark even in the daytime, and when you get back there the dance hall is this big, corrugated tin barn, way up off the ground on these six-foot cedar posts, because the hall stretches way out over the creek, and it floods there a lot. It’s run by a committee, by members who put in the money and effort to keep it going for future generations. They have two public dances per month, and the rest of the time they rent it out for special occasions. It’s just a great room; I’ve got a true soft spot for that place.”

“Oh, man, it is so rustic here, I just love the Swiss Alp, right there on Highway 77 near Schulenburg. It’s all old barn wood and rusty tin, just a barn, really,” Fowler says. “But the dance floor is swirling, and the place has such a great feel; if you spill your beer in there nobody’s gonna complain, let’s put it that way. I figured out early on when I started playing the dance halls, you just have to play music that’ll keep ’em drinking beer and dancing, and if you do that everything’ll be fine.”