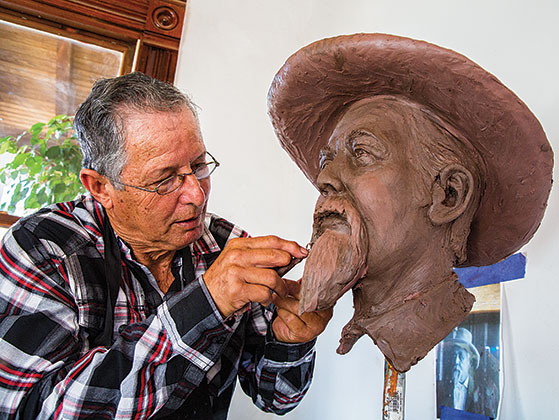 Front and center on the grounds of the Texas Capitol in Austin, the Tejano Monument’s life-size granite figures include an explorer, a Tejano vaquero astride a horse, a pair of Longhorn cattle, a man and woman, boy and girl, a sheep, and a goat.

“I wanted to show that Tejanos have been in Texas since the 1500s,” says the sculpture’s creator, Armando Hinojosa. Tejano, he explains, is the most popular term of reference for Texans of Mexican descent with long-lasting ties to the land. He traces his own roots to Don Tomás Sánchez, who founded the city of Laredo in 1755.

Hinojosa’s father, Geronimo Hinojosa, painted billboards for a living, and passed his artistic talent to his son, who eventually earned a degree in painting and sculpture at Texas A&I (now Texas A&M University-Kingsville). “I always knew I wanted to paint and sculpt,” says Hinojosa. “I like to do both. But to me, sculpture is harder because it has to look good in three dimensions.”

Hinojosa has created at least 35 monumental sculptures, including works for Texas A&M University, Sea World San Antonio, the Boy Scouts, the city of Corpus Christi, and the Laredo airport. The latter, called Friends Without Borders, includes a vaquero drinking coffee with a charro from Mexico.

The various components of the Tejano Monument at the Capitol were all his idea. “When the explorers came through in the 1500s, they brought horses and cattle, sheep, and goats. That’s where it all started,” he says. As a boy, Hinojosa loved ranch life, and it shows in the lifelike nature of his sculptures.

“Public art should celebrate the freedom of creativity,” says Hinojosa, “and honor the things that are really important to our world. I hope people feel a sense of connection with my work, and that it enriches their lives.”