Gause's Ruthie Foster takes her blues music around the world 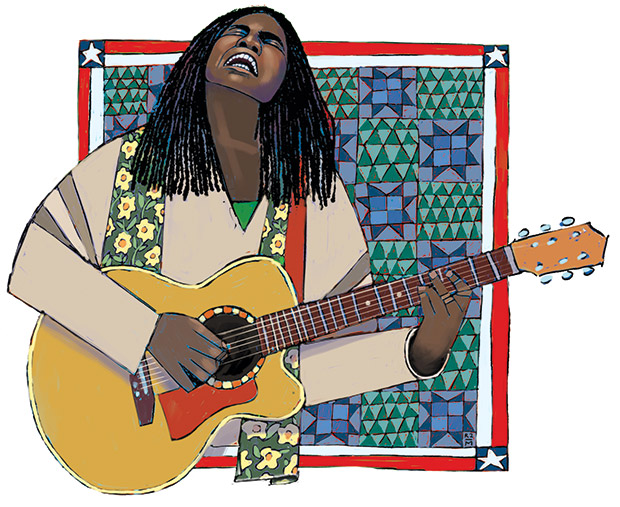 It was in Austin that Foster released her first album, Full Circle, in 1997, followed by eight more albums over the years. The three most recent, The Truth According to Ruthie Foster (2009), Let It Burn (2012), and Promise of a Brand New Day (2014), were each Grammy Award nominees for Best Blues Album.

Foster takes a magpie approach, picking up bright threads from various genres and weaving them into her own distinctive sound.

Known for her powerful, soulful voice and rhythmic guitar playing, she has been a perennial winner of the Koko Taylor Award for Traditional Blues Female Artist of the Year at the Blues Music Awards in Memphis. Despite Foster’s associ-ation with the blues, in many ways her music transcends strict categories. She takes a magpie approach, picking up bright threads from various genres and weaving them into her own distinctive sound. Her music has attracted similarly diverse audiences. She spent the summer performing in Italy, Germany, Spain, and the Canary Islands before returning for a stateside tour with shows from California to Maine. This November she will appear on stage in Denmark, and then in Cuba in December. But in many ways, Foster affirms, there is still no place like home.

Q: How did growing up in Gause affect your sound?

A: I had access to a lot of gospel music from my family and from being a musician in church. I came from a family of singers. I started playing piano and guitar when I was about 10 and 11. Growing up in a rural area, the radio stations were mostly country stations. On a clear night you could also pick up blues stations. Blues was a big deal in that region. In record stores, I started with the Americana bin and then blended in blues and gospel influences. I’m diverse in what I record. Aside from writing my own songs, I’ve covered some that I love by Lucinda Williams, Johnny Cash, and Patty Griffin.

Q: Why is blues music still relevant and popular in the 21st Century?

A: The blues is about everyday life. It’s the people’s story. For me, connecting with the blues came later, and I got deeper into it as my life changed with trials and triumphs. It’s a deep well, and I continue to draw from it.

Q: What are your plans for the coming year?

A: I hope to have a new album out next year. It will probably be my most intimate one yet. Getting past that 50 mark, I’ve got a lot of miles in me, and I’m ready to put it all down. I’m having my say.

Q: Where do you like to travel within Texas?

A: I’ve gone out to Marfa, and there’s something about that vastness that’s intriguing to me. There is a timeless quality. I like the journey of a road trip, having some great music on the radio, stopping along the way and finding a little diner with only seven records in the jukebox.

Q: Where do you go for food and entertainment close to home?

I like my Tex-Mex. In Austin, there’s Maudie’s, and Guero’s on Congress Avenue, which has a stage and is also good for music. I’m always running into someone I know there. In San Marcos, Garcia’s Mexican Restaurant has the best fresh-made tortilla chips and tortilla soup, and I’m looking forward to hearing some singer-songwriters at Cheatham Street Warehouse.

Q: Where can people hear you play?

A: I travel extensively on tour. One year I spent 250 days on the road. But once in awhile you’ll find me at Strange Brew on Manchaca Road in south Austin. And I play at Antone’s sometimes. I’ve played at Dosey Doe in The Woodlands.

Q: Why do you choose to live in Texas, considering your extensive travel?

A: I love Central Texas. The music lends itself to the place. The folks here are open and laid-back. I’ve lived on the West Coast, the East Coast, in New York, in Seattle. They are all beautiful, but I’m a Texas girl. The live oak trees, the mesquite wood for barbecue, catching catfish in the Brazos River—it’s in my blood. I love coming home to Texas—there’s a song in every corner.