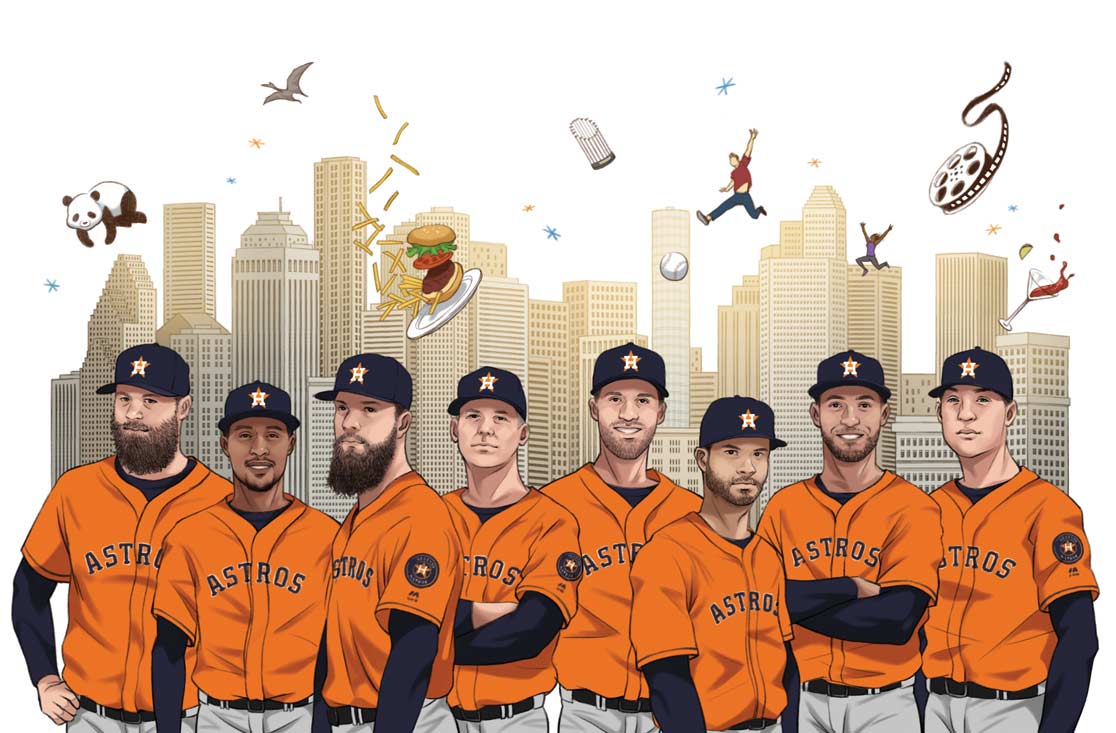 It’s a good time to be the Houston Astros.

After several tough seasons of rebuilding and an unpopular move from the National League to the American League, the team capped its recovery last fall with its first World Series title.

They did it with a roster of charismatic young players who breathed new life into fans across Houston and beyond. But as they were coalescing into a contender last summer, Hurricane Harvey flooded Houston, leaving the city desperate for a break in the clouds.

The Astros answered the call.

“It created a bond and became part of the storyline,” says Richard Justice, who’s reported on the Astros for MLB.com and the Houston Chronicle for 18 years. “They understood that playing baseball was not going to drain one teaspoon of water or repair broken lives. But they also understood that playing a great baseball game gave people a needed distraction for a couple of hours a day.”

The Astros are still at it this season, vying for the American League West title and positioning for a playoff run. Fans have responded. The team is drawing about 36,000 fans for home games—the third-highest attendance in the American League—up from about 20,000 in 2012 and ’13. Even for midweek day games, Minute Maid Park in downtown Houston fills with people dancing, lounging, and cheering in their Astro orange.

“Now that we’ve re-established ourselves, there’s unconditional support for us. The fans are turning out, and that’s what it’s all about.”

“The Astros are an important part of the city’s fabric,” Justice says. “In some cases, it’s the background music of our summers. In other cases, it’s part of the thing that binds families together. And when a team is really good and really exciting, it draws people into the conversation.”

So, how do the ballplayers feel about their adopted home city and all the excitement?

Q: What surprised you about Houston when you moved here?

George Springer, outfield: It’s a huge city. You can go an hour and still be in Houston, which is awesome. The best way I can put it is, it doesn’t matter how long you’ve been here, you can always find some place that you’ve never been to. I think it’s a very, very unique place to live.

José Altuve, second base: That it can get pretty hot and it can get pretty cold, too. Coming from a country [Venezuela] that’s hot all the time, in the offseason, in the winter, it’s cold and rainy here. I like that about Houston.

Collin McHugh, pitcher: The restaurant and bar scene here in Houston is as good as anywhere in the country, probably anywhere in the world at this point—just the diversity of food and diversity of chefs. One of my favorites is a place in the Heights called Coltivare. It’s an Italian restaurant but they put their Houston spin on it—everything’s local, everything’s organic. They’ve got a garden in the backyard right there.

A.J. Hinch, manager: It’s a much bigger and grander city than I imagined. I learned it from my daughter’s soccer schedule, when you’re driving all over the city of Houston to different events. And the people are diverse. There are a ton of natives and also a ton of people who didn’t grow up here like me. It’s a very livable place and a very good place to raise my kids. It’s comfortable living.

Q: What do you like to do in your spare time? Where do you take visitors who come to town?

Will Harris, pitcher: I’ve got two young kids [ages 6 and 2], so we hit up the zoo on a pretty regular basis if the weather’s right. It’s pretty close to home [Baton Rouge] for me, and I get a lot of people able to come to watch me play in the summer months, so that’s a luxury for us. For me and my wife, if we could choose anywhere we want to live, it would definitely be here in Houston.

Tony Kemp, outfield/second base: If I have downtime, I’m usually in the AC. I’m a moviegoer. My mom and dad came to town last year, and we visited the Houston Museum of Natural Science with all the dinosaurs and stuff. That was pretty cool to see, to stand next to them and see how huge those animals actually were.

Q: With your weekly travel, how do you make the most of your downtime on the road?

Evan Gattis, catcher/designated hitter: We’re so busy. I don’t know how to answer that. We play every day.

Hinch: You have to find a way to make the road your home. If I start my workday on the road at 8 a.m. it becomes a really long day, so I try to mimic what I would do at home. I like to get out of the hotel and have a morning to myself before I have to put the manager hat on and start my workday. I’ll find a breakfast spot, see some of the city. We are in a different city, in a different hotel, in a different part of the country all of the time. So I’m trying to enjoy where I am at that time but not have it all feel like work leading up to my workday.

“You can go an hour and still be in Houston, which is awesome. The best way I can put it is, it doesn’t matter how long you’ve been here, you can always find some place that you’ve never been to. I think it’s a very, very unique place to live.”

Q: Last year was extraordinary on and off the field. How do you maintain that spirit?

Springer: We accomplished something that’s hard to do, but the idea is we’re not going to be happy with one. You want another one because you know how it feels. You know what happens when you win a major championship. It’s the best, and we need to remember that feeling and not settle for anything but our best.

Hinch: I think the competition creates that for itself. It’s really hard to win. It’s even harder to sustain winning. And the challenge every day of playing at this level will create enough for the players and the coaches and for me to know what we have to do to be successful. We loved experiencing what we did—the winning, the parade, the smiles, the joy in the city. And we also know what kind of work it took to get to that point. I’ve never feared that we wouldn’t be able to put in the work and put in the attention needed to win because of the day-to-day grind of our job.

Q: What is the best part of being on the Astros right now?

Dallas Kuechel, pitcher: Houston is such a great sports town, and now that we’ve re-established ourselves, there’s unconditional support for us, whether it’s a Wednesday day game or a Friday night or Saturday night game. Every day is pretty much the same. The fans are turning out, and that’s what it’s all about.

Altuve: This is the organization that gave me the opportunity to sign as a 16-year-old free agent and go to the minor league. I’ve been here all my career. The people here support every single player. I think I feel really comfortable here, and that’s the reason why I’m here.

Gattis: Other than winning a World Series? Winning baseball is really fun. It’s fun being on the best team in the world.