In the Creative Moment

The Wimberley Community Center displays portions of Winn’s 1950 mural The History of Ranching, including the section above.

The artist, inventor, architect, and teacher Buck Winn first beheld the hills of Wimberley in the late 1930s. Enchanted by the valley’s flowing waters and natural beauty, Winn and his wife, Kitty, bought 1,100 acres about two miles east of the old limestone buildings on Wimberley’s square.

The Hays County Historical Commission released the documentary Larger than Life: The Story of Buck Winn in 2010. Copies are available at the commission’s website.

There, the couple built a home and raised a family. Often working out of his home studio, Winn completed 50 major public art projects before his death in 1979. Though many of Winn’s murals and sculptures were lost to redevelopment, a sizable number have been preserved. For example, you can see sections of his 1950 mural for San Antonio’s Pearl Brewery, on the history of ranching, at the Wimberley Community Center. Other prominent works survive at the Gonzales Memorial Museum and at Fair Park in Dallas.

Born James Buchanan Winn in 1905 in the cotton-farming community of Celina, north of Dallas, Winn resisted his father’s wish that he study agriculture at Texas A&M and instead pursued an art education at Washington University in St. Louis. Additional training at Academie Julian in Paris provided him the opportunity to travel to North Africa, where he marveled at Moorish and Egyptian architecture.

In 1930, living in Dallas, Winn associated with the bohemian “Pearl Street Gang,” whose members included architect O’Neil Ford, writer Horace McCoy, and cartoonist Ed Reed. Winn also honed his craft with the “Dallas Nine”—an amorphous circle of artists known for their interpretations of regional landscapes and people in a style dubbed Lone Star Regionalism—and began earning money by painting portraits. Along with art by Jerry Bywaters, Otis M. Dozier, and Alexandre Hogue, Winn’s artwork was showcased as part of the renowned exhibition at Fair Park’s Dallas Public Art Museum titled Nine Young Dallas Artists. “Winn’s choice of subjects in the 1930s (primarily Texas agricultural) and his reduction of forms to their essential geometric antecedents, places him squarely in the Lone Star Regionalist camp,” explains Michael Grauer, curator of art and western heritage at the Panhandle-Plains Historical Museum in Canyon and coauthor of the 1999 book Dictionary of Texas Artists.

Winn received his first major commission in 1933, a large Texas-history canvas mural for the lobby of the Village Theatre in the Highland Park section of Dallas. The theater gave the mural, which depicts French explorer La Salle landing on the Texas coast in 1685, to the Dallas Historical Society during a 1980s remodel. The mural is currently in storage.

The 1936 Texas Centennial celebration at Dallas’ Fair Park provided work for numerous local artists, though New Yorker Eugene Savage was commissioned to create the grand murals in the Hall of State. As related in the 2010 Hays County Historical Commission documentary, Larger than Life: The Story of Buck Winn, Savage hired Winn as his chief assistant in the creation of two murals chronicling state history. Winn also designed the hall’s large gold-leaf Texas star, surrounded by symbols of the six nations whose flags have flown over the state.

At the fair’s main entrance, on the grounds’ western side, Winn created an 85-foot obelisk featuring bas-relief scenes of cowboys and wagon trains heading for Texas. All of Winn’s known Fair Park works remain accessible for public viewing.

Winn honed his craft with the “Dallas Nine”—an amorphous circle of artists known for their interpretations of regional landscapes and people in a style dubbed Lone Star Regionalism.

Texas Centennial planners in the town of Gonzales, today an important stop on the Texas Independence Trail, also noticed Winn’s work and commissioned him to create two murals, which still grace the walls of the Gonzales Memorial Museum. One consists primarily of text detailing the town’s history and contribution to Texas’ quest for independence; the other depicts the “Come and Take It” cannon, so-named when Gonzales pioneers refused to hand the weapon over to the Mexican army at the outset of the Texas Revolution.

With the income earned from these works, Buck and Kitty headed for the Wimberley hills. When Buck’s father first laid eyes on the artist’s Hays County paradise, he famously snorted that the land was worthless for growing crops. Buck Winn is said to have smiled and replied, “I know.”

The home the artist built, looking out onto a pristine valley, reflected his approach to life and art. Between the bedroom wing and the kitchen/dining/living wing, a spacious, rough-hewn studio hummed with activity. Daughter Kathryn Winn Eoff, who lives in the private home today, says that until she saw how her school friends lived, she and her brother Jim figured that every family must have a whirlwind of artistic activity in their house. “No one can remember seeing my father ever sit down,” she recalls. “He was always involved in a project, always in the creative moment.” 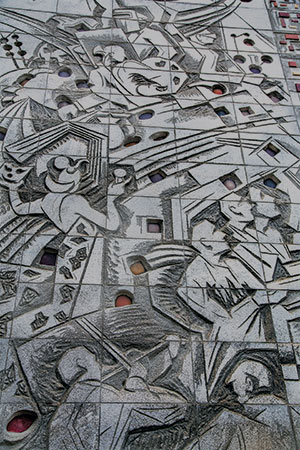 An 800-square-foot concrete-and-Blenko glass mural, depicting the spirit of Texas State University, on Flowers Hall at the university in San Marcos.

On at least one occasion, Winn worked in miniature. His competition-winning design for a three-cent postage stamp, commemorating the centennial of Texas statehood in 1945, dramatized the Texas and U.S. flags, with the lone Texas star beaming into one of the United States flag’s then-48 stars.

The History of Ranching, Winn’s 280-foot-long mural for the round Pearl Corral entertainment hall at the Pearl Brewery complex in San Antonio, was believed to be the largest mural in the world when he painted it in 1950. The mural depicts pastoral scenes of cattle and landscapes, as well as cowboys at work and around a chuck wagon. In the 1970s, the mural was taken down, cut into 11 sections, and put into storage. Dorey Schmidt, a former University of Texas-Pan American professor and Wimberley Institute of Cultures associate, tracked down the massive canvasses in the 1990s and negotiated the transfer of some of them to the institute. In addition to the sections on display at the Wimberley Community Center, the Wittliff Collections at Texas State University owns three 28-by-6-foot sections of the mural. The university plans to install the restored sections in its Alkek Library after a library renovation is complete.

Authorized as a “professional associate” by the American Institute of Architects, Winn taught architecture at the University of Texas at Austin for seven years. Architect George Nordman told documentary filmmaker Richard Kidd for his 2010 film that Winn was an “unforgettable teacher” who “bubbled with ideas.”

With the restoration and continuing care of his surviving works, and projects like the Hays County Historical Commission film, many Buck Winn appreciators hope that he won’t be forgotten. “Buck Winn deserves to be part of the mainstream Texas art conversation, much more than he is now,” says Grauer. “He deserves to be up there with Tom Lea and the other greats of early Texas art.”