An Intverview with Elmer Kelton 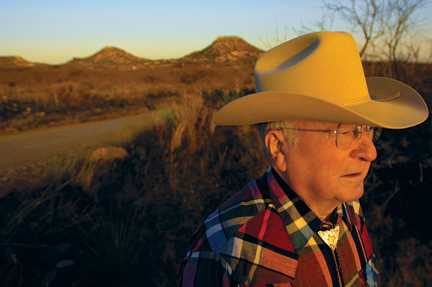 Celebrated author Elmer Kelton is at home in the rough West Texas terrain he depicts so eloquently in his novels. (Photo by Kevin Vandivier)

The mood in the Boerne Public Library last summer was festive and the atmosphere electric, like that in a roomful of eager fans awaiting the appearance of a rock star. But the star the standing-room-only crowd awaited with such anticipation was San Angelo author Elmer Kelton, who was on a book-signing tour to promote his 2007 memoir, Sandhills Boy: The Winding Trail of a Texas Writer.

Named by the Western Writers of America as “All-time Best Western Author,” Kelton has published more than 50 books during the last half-century. Four of them have won Western Heritage Awards from the National Cowboy & Western Heritage Museum, and one of those—The Good Old Boys—was made into a TNT movie starring Tommy Lee Jones and Sissy Spacek.

“At first glance, West Texas can be pretty off-putting … but if you’re born and brought up [here], … it has a wild beauty of its own.”

The author grew up on the McElroy Ranch in Crane and Upton counties. “My dad [working cowboy and ranch foreman Buck Kelton] wanted to make a cowboy out of me,” he told the audience, “but every time he turned around to see where I was, I was reading a book.” He noted that he still has the first book he ever owned: a hardcover edition of Treasure Island, for which his mother paid 79 cents. “I own so many books that I think they reproduce in the dark,” he added, drawing a laugh.

After entertaining listeners with excerpts from his memoir and tales of cowboy characters he has known, Kelton fielded questions like these from his fans.

“Who was the real-life model for Charlie Flagg [the central character in Kelton’s best-known book, “The Time It Never Rained]?”

“My mother was always convinced it was my father,” the author replied, “but Charlie was really a composite of people I knew.”

“Do your novels start with an idea or a character?”

He added, “I’ve often been asked how my characters differ from the traditional, larger-than-life heroes of the mythical West. ‘Those,’ I reply, ‘are seven feet tall and invincible. My characters are five-eight and nervous.’”

“Do you have any advice for young writers?”

The next morning I met with Kelton over breakfast at the Limestone Grille inside Boerne’s Ye Kendall Inn, and I asked some questions of my own. 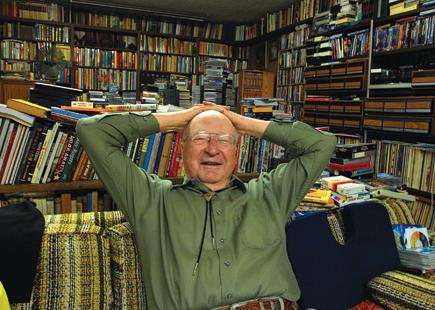 Bookshelves line the walls of the author’s library, the largest room in his San Angelo home. (Photo by Kevin Vandivier)

MAYES: I understand that poor eyesight played a big role in your limitations as a cowboy.

Kelton: We [my family and I] didn’t realize I was nearsighted, but when we went out on drives to round up cattle, I couldn’t see very far. I’d miss cattle and others would come along and have to pick them up.

MAYES: If you hadn’t been nearsighted, do you think you would be a stove-up cowboy now instead of an award-winning author?

Kelton: If I’d been a real good cowboy, like I wanted to be, I’d probably be babysitting somebody’s ranch out on the Pecos River.

MAYES: That’s a good example of how things often work out for the best even though it’s disappointing at the time.

Kelton: Another example is The Time It Never Rained. I wrote that book three times before the publisher would take it. I’ve always been grateful it didn’t sell those first two times because it would have gone out there and died and nobody would have heard of it again. As it is, it’s my signature book.

MAYES: It’s my favorite of all your books. I’ve heard it’s yours, too. Why?

Kelton: It’s more personal to me because I lived it. My historical novels I lived vicariously, but that one I lived for real. 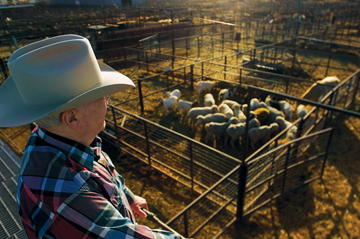 Kelton at San Angelo’s Producers Livestock Auction Co., which he frequented while working as a journalist.

MAYES: I love that line you wrote in your memoir about your dad’s reaction to the Great Depression, “He could never forget those mortgaged cows that for so long bore down on his shoulders like the weight of the world.”

KELTON: Well, that kind of tainted his life because it was such a hard experience. And he was always afraid the next depression was just about to start. From the standpoint of economics, he was always pessimistic. If it didn’t start this afternoon, it’d probably start tomorrow. It left him pretty badly scarred.

Kelton estimates that he spent the equivalent of seven years of his life at San Angelo’s auction rings while covering farm and ranch news for several publications.

[Kelton writes in his memoir that when he and his wife wanted to purchase their first home in 1948 for $6,500, his father gave him this advice: “You’d better wait until they’re cheaper.” He also shares his father’s reaction when he told him at age 16 that he wanted to become a writer: “… That’s the way with you kids nowadays, you all want to make a living without working for it.”]

MAYES: I also love the first line of Cloudy in the West, when you describe the main character chopping weeds: “All afternoon Joey Shipman had been killing his stepmother with the hoe, chopping her to pieces an inch at a time … .” How could you not keep reading after that sentence!

Kelton: I think that’s one of my best first lines, but I think my very best is in The Good Old Boys: “For the last five or six days Hewey Calloway had realized he needed a bath.”

MAYES: With more than 50 books to your credit, how do you continually create such distinctive characters?

KELTON: The world is full of distinctive characters. [Grin.] I just pick and choose.

MAYES: After seeing other parts of the world during your years in the service, and meeting your wife, Ann, in Austria, you still came back to West Texas, which you call your querencia, or place of the heart. What is it about that area that makes it paradise to some and purgatory to others?

Kelton: At first glance, West Texas can be pretty off-putting. Dry, flat land, blowing sand, and these long droughts that we have. But if you’re born and brought up in West Texas, you can see that it has a wild beauty of its own. And if newcomers stay long enough, they generally begin to get drawn into it.

MAYES: You’ve lived the last six decades in San Angelo. If I had just one day to spend there, what would you suggest I see?

Kelton: I would urge you to visit old Fort Concho, the frontier fort that spawned what became San Angelo. It is probably the most intact—as contrasted to reconstructed—frontier-era fort in the West.

MAYES: In your memoir you wrote: “I will stop almost anything I’m doing to listen to a good fiddle player.” Does that still hold true?

Kelton: Yes, it does. My first clear recollection of listening to country music was when we were living at a line camp on the McElroy Ranch in Crane County called Sand Camp. My dad had an old, battery-powered Atwater Kent radio with a morning-glory horn on it. He ran an antenna up the windmill tower, and we could pick up WFAA in Dallas-Fort Worth and some Mexican border stations. With the limited amount of time that he’d play that radio, because of the battery, we almost always listened to country music. I still enjoy the old-fashioned, raw country music as it was in the ’20s and ’30s, the old artists—Jimmie Rodgers, the early Sons of the Pioneers, Bob Wills, Gene Autry—a lot more than I enjoy the general run of what we call country music today.

MAYES: What current Texas music artists do you enjoy?

Kelton: Red Steagall, Don Edwards, Michael Martin Murphey, Willie Nelson. And I like the music that’s played at cowboy symposiums like the one in Lubbock [National Cowboy Symposium & Celebration].

MAYES: What about George Strait?

Kelton: I like George Strait. It’s too bad he didn’t come along in time to sing with Bob Wills; I think they would have fit together beautifully.

MAYES: What parts of Texas do you like to visit?

Kelton: I love the Hill Country, its history and the beauty of the landscape. And the people—they’re just solid, old bedrock Texas people with a strong German influence. I’ve always liked them and felt a kinship to them.

MAYES: When you travel in the state, where do you like to eat?

Kelton: In Fredericksburg, we like Friedhelm’s [Bavarian Inn] and the Old German Bakery & Restaurant; in Kerrville, Mamacita’s and Annemarie’s Alpine Lodge; and in Boerne, the one here—Limestone Grille. In my teenage years, going to rodeos and other places, I fell in love with chicken-fried steak and gravy. But I guess my favorite of all foods continues to be Tex-Mex. During my travels I’ve tried Mexican food just about everywhere. We have several excellent Mexican restaurants in San Angelo—Henry’s Diner, Fuentes Cafe Downtown, Los Panchitos. We just take our pick.

MAYES: As a youngster, you thrilled at every chance to go to the movies, and during your UT years in Austin you went to a lot of movies at the Ritz and Cactus theaters down on East 6th, right?

KELTON: Yes, I just loved Westerns, and those theaters specialized in them. And they were cheap.

MAYES: How did you feel when The Good Old Boys was adapted as a film?

KELTON: It came as a surprise because it had been optioned once many years earlier, and nothing came of it. Then somebody sold TNT on the idea, and they asked Tommy Lee [Jones] if he would do it. He said, “If you’ll let me direct it, I’ll do it. Then Tommy Lee the actor will do what Tommy Lee the director tells him to do.” [Chuckle.] I was really pleased with the way it turned out … he followed the book pretty closely.

MAYES: How do you feel about being voted “All-time Best Western Author“ by your peers in the Western Writers of America?

KELTON: I’d hate to have to stand up and defend that in front of a jury. I appreciate the compliment, but I can’t say that I believe it.

MAYES: I read that you were greatly influenced by J. Frank Dobie. What about him, specifically, made him your hero?

KELTON: Because he wrote about the kind of people I knew when I was growing up, people who lived in small towns and in the country. He saw the importance in local history and local culture.

In 1990, Kelton retired from a journalism career that spanned more than four decades, including stretches at the San Angelo Standard-Times, Sheep and Goat Raisers’ Magazine, and Livestock Weekly. He’s fond of saying, “It took me 42 years to quit my day job.” But he has no intention of quitting writing. Hard Trail to Follow was released in January; Many A River is due out late this month.

“Nature has slowed me down some,” he says, “but it has not stopped me.”