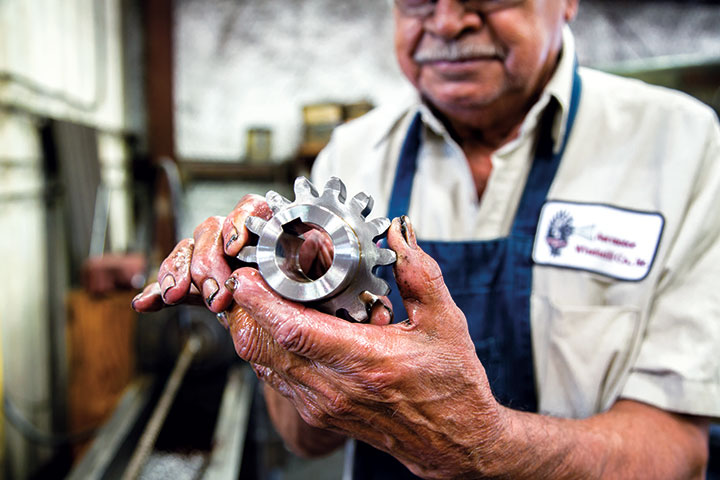 As familiar as bluebonnets and Dairy Queen, the Aermotor windmills that dot the Texas countryside are such a fixture that you might overlook them. But take note. These graceful machines turning in the wind have been hydrating Texas’ arid lands for generations, faithfully drawing water from as deep as 1,500 feet underground.

The last American-made windmill in the country, the Aermotor symbolizes a Texas knack for perseverance through tough and changing times.

“Windmills are pretty much a way of life in West Texas,” says Jesse Zwiebel, a manager at this 126-year-old company now located in San Angelo, a city perched on the northeastern edge of the Chihuahuan Desert. “A lot of places they might be a novelty item. But here, people depend on them every day.”

Aermotor was founded in 1888 in Chicago, but the company’s current incarnation is 100 percent Texan. Owned by a group of West Texas ranchers, Aermotor moved to San Angelo in 1986. Its 25 employees make all windmill components, from the blades to the cotter pins, in house. The castings are poured elsewhere—in Coolidge and Enid, Oklahoma—but finished in San Angelo. Although it costs a little more to make the windmills in Texas, sales at the last U.S. windmill factory are climbing, Zwiebel says.

“The western United States would not have been pioneered the way it was without the Aermotor windmill,” says Zwiebel. “It was a lifesaver—and still is.”