My Hometown: College Sweethearts Serve Up Tex-Mex Comfort in Leakey

In the scenic Frio River Valley, Mama Chole’s welcomes guests from near and far 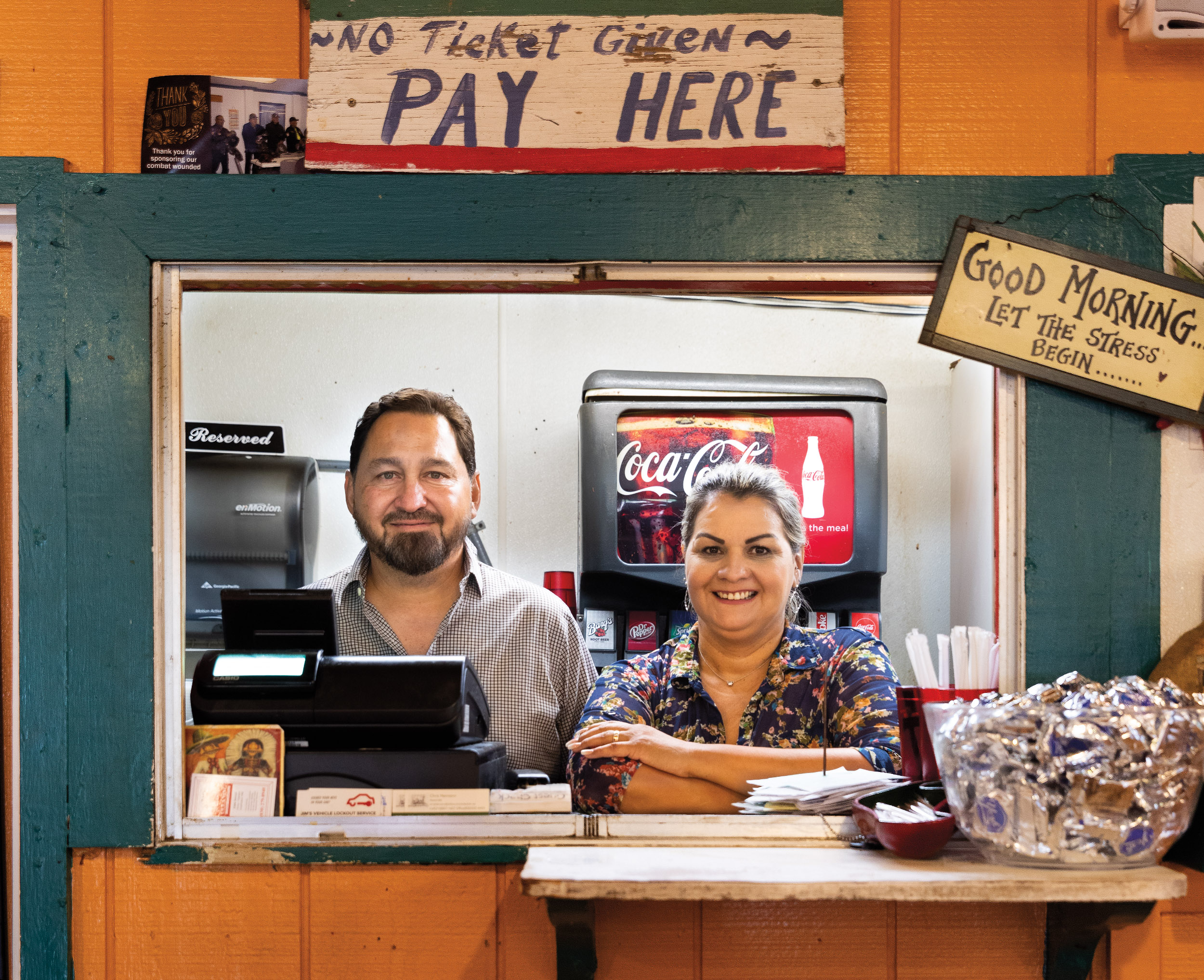 jimmy and Alma Albarado have run Mama Chole’s since they opened the restaurant in 1998, raising four kids along the way. Photo by Kenny Braun.

The year was 1991. At the Purple Sage Dance Hall in Uvalde, Jimmy Albarado asked Alma Alaniz to dance. He’d noticed her on campus at Southwest Texas Junior College, where they were both students. Alma accepted the dance, but didn’t say a word. “I came back to my buddy and said, ‘Worst dance of my life—I’ll never do that again,’” Jimmy recalls. “About three or four songs later, somebody taps me on the shoulder. It was Alma, saying, ‘What, is that it?’” Jimmy and Alma have been together ever since, making their home in the western Hill Country town of Leakey. Historically rooted in ranching, Leakey is a regular stop for campers, tubers, and motorcyclists visiting the Frio River and nearby Garner State Park, as well as a home base for hunters. The Albarados meet many of these visitors as the proprietors of Mama Chole’s, the Tex-Mex restaurant they opened in 1998 in the center of town. The cozy restaurant’s family atmosphere extends to the rest of Leakey, where the Albarado name goes back five generations and where Jimmy and Alma have raised their four children. “I don’t care who you are,” Jimmy says of his hometown, “you’re never an outsider.” And another thing, Alma adds, “It’s pronounced ‘Lay-key,’ not ‘Leeky.’”

JA: “Mama Chole’s is named after my grandmother. She had a restaurant in Antioch,
California, and that would have gone back to the 1940s. So it was just kind of in my blood. We ultimately ended up with her recipes. One thing she said was, ‘Be very sure you want to open a restaurant because it’s a very jealous business. It wants all of your time and all of your money.’ And that’s true for sure.”

AA: “Everybody likes to tube or kayak the river. People put out their tents and sit out there along the river. You can sit there in the water and enjoy it with the family. It’s refreshing when it’s so hot. Now hunting also brings in a lot of people. People rent out their ranches for hunters to come in. I really like the views. Everything here is really pretty.”

AA: “My oldest daughter, Abby, she’s been running Mama Chole’s when she can. I told her, ‘I guess you’re the one who’s going to end up with the restaurant because nobody else wants it.’ My oldest son, Jimmy IV, worked here, but he totally did not like it. He is an electrician now, and he loves that.”

AA: “My youngest daughter, Emma, graduated from Leakey High School this year in a class with only nine people. It’s kind of like homeschooling—they all get their one-on-one attention. My daughter has a lot of friends, and they enjoy it. I really enjoyed them being in a small town. It just scares me when they’re about to drive here or out of town.”

JA: “We had an older customer named Paul; he’s passed away since. He’d come in and order the ‘Paul’s Pepper.’ That’s the only thing he’d ever order. We tried putting it on the menu, and it was a hit. We lay out jalapeño peppers and put seasoned ground beef, queso, and grilled onions, then roast it. If you ever eat it, you’ll order it again. A lot of people try to invent plates like that so they can be on the menu.”

AA: “Sometimes on Fridays we’ll go to
the Historic Leakey Inn. They have a back-porch bar. All the locals will hang out there. We just hang out with our friends and keep up with everybody.”

AA: “Here in Leakey, I’ve gotten to know a lot of people. It’s just an easygoing town and everybody’s friendly, a really close community. They’re always worried about you, or they’re happy that your kids graduated, or that I have a new grandbaby. They’re all great people.”
JA: “One thing I have to say about growing up in Leakey is everybody’s somebody. It’s a very welcoming town. Whenever I die, I want to be in Leakey.”