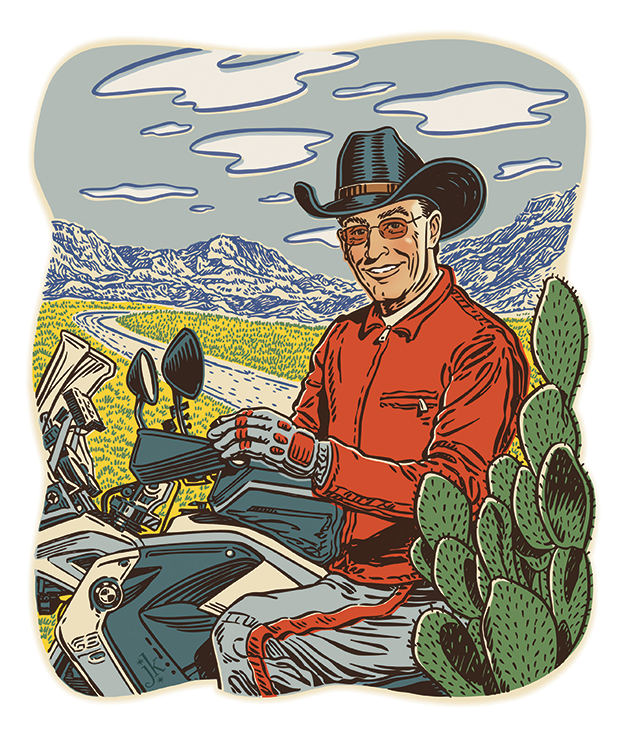 Bull riding has been good to Ty Murray. But that doesn’t mean he wants to hop on the back of a 1,500-pound bucking bovine ever again.

“I did everything I wanted to do, and I got all of it that I wanted. Sometimes it feels like another lifetime in a way.” – Ty Murray

“When you’re young and invincible, you feel like getting hurt’s just for the other guys,” says Murray, a Stephenville rancher and ProRodeo Hall of Fame inductee. “Now being on this side of it, I look at these young guys riding bulls, and I think, ‘how do they survive?’”

Murray retired from competition in 2002, and now the 47-year-old serves as an elder statesman of the sport. He co-founded the Professional Bull Riders in 1992 and still works for the circuit, providing TV commentary for about a dozen CBS broadcasts a year and hosting the annual PBR Ty Murray Invitational each March in Albuquerque.

Outside of rodeo, Murray raises black Angus cattle on his 2,400-acre spread and dotes on his 5-year-old son Kase. He and fiancé Paige Duke—a TV personality on the RIDE TV network—plan to marry
in September.

Q:What brought you to Odessa College?

A: A full-ride rodeo scholarship. I had offers around the country but I wanted to come to Texas, and Jim Sharp, the guy who was my hero that was a few years older than me, he had won a national title for Odessa College.

Q: How’d you end up settling in Stephenville?

A: I just really liked the area. Being from Arizona and the desert, I thought Stephenville was great cow country. It wasn’t East Texas, but it wasn’t West Texas either. There’s decent grass here that you have all the time, and it’s a lot of water and rolling hills and scattered trees. I just thought it was perfect cow country.

Q: Where do you like to go in Stephenville for fun?

A: For anybody who comes to Stephenville, Hard Eight barbecue is the place to go. They have these giant barbecue pits with big lids on them, and they’re just smoking every kind of meat you can think of 24 hours a day. It’s really rustic, and they’ve got a bunch of pictures of all the famous cowboys that frequent the place. Then there’s a little diner called Peacock’s that I’ve eaten at for as long as I’ve been in Stephenville, which has been 25 years I guess. It’s a little old-school diner. They don’t ever close. A few years ago they were going to shut down for Christmas, but they changed their minds because they couldn’t find the key to lock the place. That’s a true story.

Q: Where do you like to travel within Texas?

A: I have a BMW motorcycle, and we love to take trips on it. Big Bend is an amazing place to go in the fall and wintertime. Whenever we only have a quick weekend or something, Paige and I jump on the bike and ride down to Galveston and eat some seafood and stay in a nice resort there. I’ve ridden all over the state pretty much.

Q: What do you like to do out in Big Bend?

A: I love the Gage Hotel in Marathon, and I love riding through Lajitas and Terlingua. I think those are really unique parts of the world. There’s no other place quite like Big Bend—the culture and the people, everything about it. I’ve seen really cool things
in Big Bend on my motorcycle. I saw a mountain lion stalking a coyote.
It happened right in front of me. I was probably going 50 miles an hour, and the coyote ran in front of me, and the mountain lion was right behind him. And then they both saw me, and they both scattered in different directions.

Q: Where do you go in Galveston?

A: We stay at the San Luis Resort, and you know, I’ve had one of the best meals I’ve ever had in my life there at The Steakhouse. It was the best bone-in rib eye I’ve ever had. I eat at the best restaurants all over the country, and I’ll put this steakhouse up against any place I’ve ever been. We ended up eating there two nights in a row we liked it so much.

Q: Do you still practice or compete in rodeo?

A: I really don’t. I think I was able to reach the benchmarks that I set for myself. You know as a young guy that it’s a young guy’s game. I went hard, I did everything I wanted to do, and I got all of it that I wanted. Sometimes it feels like another lifetime in a way. But I loved it, and I feel fortunate that I was able to make an amazing living doing what I would rather do than anything else. That was my dream. To be able to make a living playing cowboy was a pretty lucky way to make a living.