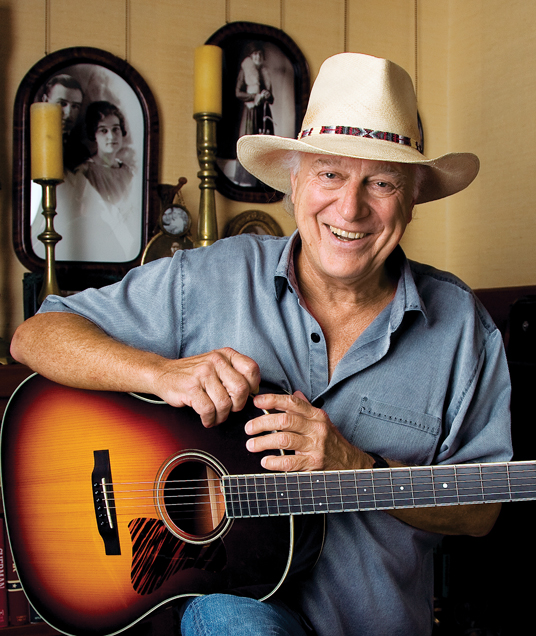 Of all the vaunted singer-songwriters who serenaded the Lone Star State with a rock-tinged country-and-folk sound when Austin was putting down its Live-Music-Capital-of-the-World roots in the 1970s, it is Jerry Jeff Walker who perhaps best wears the mantel of troubadour. Part Jack Kerouac, part Woody Guthrie, and part French Quarter busker, he is a music-poet in the truest sense. Jerry Jeff tells stories and sings songs that interpret the human condition with insight and soul.

As we sit down to talk, I realize that even Walker’s age—66—connotes one of America’s fabled roads. Although the once-notorious rowdy has mellowed considerably in recent years, he doesn’t seem far removed from the Jerry Jeff who in 1969 penned “Driftin’ Way of Life,” the first of more than a dozen classics. From Greenwich Village, to Austin, to Coconut Grove, to Haight-Ashbury and finally back to Austin, few musicians have so astutely chronicled life on the road and the characters who travel them as has Ronald Clyde Crosby, aka Jerry Jeff Walker.

Jerry Jeff is best-known for the 1968 pop smash, “Mr. Bojangles,” about a tap-dancing, street character he met in a drunk tank in New Orleans. But Walker has proved a resilient and prolific artist with a lengthy discography that numbers more than 30 albums, including the iconic Viva Terlingua, which was recorded in 1973 in the Luckenbach Dance Hall.

Walker first skidded into the state capital in an oversized Mercury in 1965, planning a brief stay before hitting the road again. By 1971, he was back in town with an MCA record deal under his Stetson and the crackerjack Lost Gozo Band, which included Gary P. Nunn, who would go on to record the Austin City Limits theme song, “London Homesick Blues.” Despite his onstage antics, which sometimes included showing up too inebriated to finish a set, Walker gained an equally boisterous following.

Writer Jan Reid, in his recently rereleased book, The Improbable Rise of Redneck Rock (University of Texas Press), explains, “Just when [Willie] Nelson or [Michael Martin] Murphey released a new album that seemed to establish them as the leaders of Austin music, Walker came out with another funky one and turned everybody around.”

Viva Terlingua was one of those albums, and it ultimately went gold.

Walker settled down a little when he married his wife, Susan, in 1974 in Luckenbach. The Walker family grew to include Jessie Jane in 1978 and son Django in 1981. Django followed in the family tradition and is a noted singer-songwriter in his own right. When not at home in West Austin, the Walkers travel between homes in Belize and New Orleans.

In 1986, the Walkers decided they could do better on their own than with record companies and established Tried & True Music. One of Tried & True’s first projects, a powerful 90-minute recording called Gypsy Songman, contains JJW originals such as Charlie Dunn and Railroad Lady (cowritten with running buddy Jimmy Buffett), along with tender ballads dedicated to his wife and children. The company continues to prosper with a growing Internet presence.

Each March, legions of Walker’s fans from throughout the United States travel to Austin to help him celebrate his birthday with performances at the historic Paramount Theater and Gruene Hall. The day before the 2008 Paramount show, dubbed the Texas Bash, I had a chance to renew my acquaintance with Jerry Jeff and talk to the Texas music legend. Dressed casually, and with his thinning, gray hair combed back, Jerry Jeff sat down in his music room, surrounded by several Martin guitars, crates of albums, sheet music, and photos of fellow musicians, including Ramblin’ Jack Elliott.

TH: You were born in upstate New York and first visited Austin in the 1960s, right?

Jerry Jeff: The first long junket was from upstate New York to New Orleans. I did street singing for about three years. One day,  I saw a sign in a coffeehouse about sharing a ride to California, and I got in a car with a bunch of people and we drove through Texas. I was on a quest to see America, and you don’t see America without going through Texas.

TH: What enticed you to return to Austin?

Jerry Jeff: Because I knew about the music scene. I had a feel for it. I actually went out to Key West, but there was no music scene. There were a lot of smugglers and wasters and I got in with those guys. I knew I was going to get into a lot of trouble, and I did. In fact, the town board came to me and advised me to go somewhere else. I got arrested about 10 times there. I decided to use that as an incentive to get on with making music the way I wanted to. I wanted to get in with people who felt like me, played like me—mixing folk music, country music, and a little bit of rock.

TH: There’s a popular bumper sticker that says “I wasn’t born in Texas, but I got here as fast as I could.” Does that resonate with you?

Jerry Jeff: Everybody in my immediate family was born here except me. Susan says I’m a quintessential Texan. I take two parking spots with my Cadillac. You know, I really think I took advantage of Austin during the good times. I was out all the time. Now, there are too many of us, so I stay home. It’s been a lot of fun.

TH: What does a being a Texan mean to you?

Jerry Jeff: Texans have pride and are straightforward. We like what we like and we do what we do. I think the Hill Country, where I live, is perfect for my disposition. With the university, schools, books and theater. Another thing about being Texan is we like our lives told in a story poem, or a song.

TH: How about the Austin music scene, the business of music, how has it changed in the past 10 years?

Jerry Jeff: What I see is there are more musicians here, but I don’t see things organized any better than they’ve ever been. The bands coming in want to live in a musical community. There are three or four big musical communities in the country. One is Minneapolis, and Austin, San Francisco and, well, New York. It’s an important part of the culture.

TH: Weren’t you one of the first Texas musicians to bail out on the major record labels and start your own company, Tried & True Music?

Jerry Jeff: When I came to Austin in 1971, I had an independent deal with MCA Records, and later, Elektra. I’d been dormant for six months because I couldn’t find people I wanted to record with. I didn’t want to go into the studio and make another studio record. There was a lull in the music business from ’81 to ’85. And then, everything was going to CD. That’s why I put out that long cassette—Gypsy Songmanto fill the gap for my audience. That album went out of print, so I was going out and doing shows. Then, we started making CDs. We decided why not just do the whole thing. I’d done 10 years of independent production, so all I had to figure out was how to get the music out. There were independent distributors handling indie records going into record stores. Rykodisc starting snapping up old LPs. Once they did one or two, we figured we could make a CD. It wasn’t mysterious anymore.

TH: What do you believe is the most important piece of advice that you’ve given your son Django about the music business and having a music career?

Jerry Jeff: Write a good song. Writing a good song is the foundation of a lot to keep you going. Guy Clark’s advice to young people was “Don’t stand too long on one foot.” But we all did, which gave us back problems.

TH: What similarities and differences do you see with the new, growing Texas music scene like the one Django’s a part of versus the cosmic cowboy generation back in the ’70s?

Jerry Jeff: The difference is we were trying to prove that music was viable—a way to have a career. Now, they take it for granted. They get their impetus to pursue because it’s not as scary for them doing it their own way instead of waiting around for someone to say ‘I’ll make your record.’ They start learning how to do the Internet and stir up stuff.

TH: How do Texas audiences compare to crowds elsewhere?

Jerry Jeff: Not so much different, though maybe in Texas the images may be a little closer to them. You know, the Charlie Dunns, Desperadoes Waiting for a Train, Women in Texas—those songs probably mean just a bit more.

TH: Has life in Belize affected your music?

Jerry Jeff: What I like about Belizeans is that they’re laid back, and the country is not too crowded. The people know why they’re there. They fly off to Houston to buy supplies, so they know what U.S. culture is like. But they scurry back home where they say, ‘This is fine. I like this.’ There’s something special about being in a place where all the people like it for the same reason.

TH: What do you miss most about Texas when you’re touring elsewhere?

Jerry Jeff: I miss my home. It helps remind me when I’m really annoyed about how crowded Austin is getting, and have just gotten back from Chicago or New York, or Atlanta, and realize, whew, this isn’t so bad. I think relative to everything else, we’re doing just fine.

TH: You’ve developed an international following like a number of Texas musicians. In what country or countries do you have the strongest fan base and why?

Jerry Jeff: I would say probably in Europe, though I haven’t gone as much as I’ve been invited to go. They call it roots music and like to tap into the stories we tell, but I still feel like I’m sort of on display as a Texan.

TH: After some 40 years, what’s the future hold for the Gypsy Songman?

Jerry Jeff: I think I’ll just play my music and tell my stories.