In the Ballpark: A TH moment with Nolan Ryan

Thanks to his involvement with three baseball teams, two ranches, and a variety of other business interests, Texas pitching legend Nolan Ryan crisscrosses the state regularly. Three of his favorite vacation spots are Big Bend, Palo Duro Canyon, and the Laguna Madre. 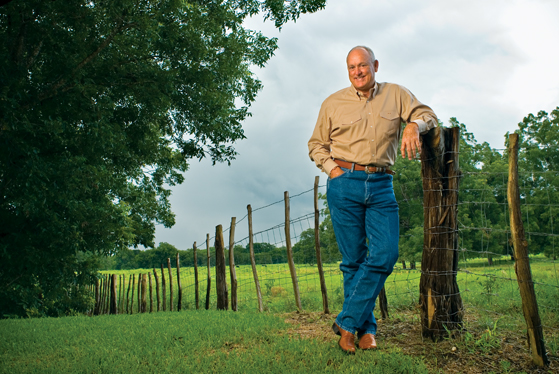 Whether you’re a baseball buff or not, you probably know the name “Nolan Ryan.” The legendary Texas pitcher–the only player in the Major League to have his uniform retired by three teams (California Angels, Houston Astros, and Texas Rangers)–set or broke 51 Major League records from 1966 to 1993. To this day, no one’s topped his 5,714 strikeouts, seven no-hitters, and 12 one-hitters. Plus, Ryan still holds the Guinness World Record for throwing the fastest baseball ever, clocked at 100.9 miles per hour in 1974.

Not bad for a small-town boy from southeast Texas. The youngest of six children, Lynn Nolan Ryan Jr. pitched newspapers on the family paper route and played Little League baseball while growing up in Alvin. At the league’s closing ceremonies one summer, a man handing out awards told the boys that someday one of them would play in the Major Leagues. “That man;’ young Ryan later told his mother, “was talking about me.”

While in high school in the early ’60s, Ryan threw so hard that he impressed a scout with the New York Mets. By 1966, Ryan was pitching for the pro ball club. Over the next 27 years, he proceeded to make baseball history as he played for the Mets, Angels, Astros, and Rangers. Six years after retiring, he was named to the National Baseball Hall of Fame.

Not surprisingly, baseball still dominates the “Ryan Express,” a nickname he earned during his early days with the Mets. Ryan, 62, is a principal owner of two minor league teams—the Round Rock Express and the Corpus Christi Hooks. In February 2008, he rejoined the Texas Rangers as team president.

But Nolan Ryan’s not all about baseball. He married his high school sweetheart, Ruth Holdorff, in 1967, two years after joining the Mets, and they raised three children—Reed, Reese, and Wendy—while Ryan was playing ball. He’s also a successful rancher and businessman with diverse interests. He even has his own brand of aged beef. Want to hear more? Sit in while Texas Highways chats with the baseball icon in his comfortable office at the Rangers Ballpark in Arlington.

RODGERS: I read that your dad bought you your very first baseball mitt—a Nokona—when you were seven.

RYAN: Yeah, that was the first thing I remember as a kid-picking out any mitt I wanted at the Alvin Hardware Store. That was about the time they were making a transition to the more modern-day gloves versus the old gloves. Being a kid who collected baseball cards, I remembered seeing some of the old-time players’ pictures with an older-style glove, so that was the one I picked. It was outdated fairly quickly! [Laughs.] I still have it to this day. You can see it at the Nolan Ryan Exhibit Center at Alvin Community College.

RODGERS: Tell us a little bit about the exhibit center.

RYAN: When I was with Houston [Astros], there was a movement in Alvin to raise money to build a bronze of me. I wasn’t comfortable with that. I felt that any money raised should be used to benefit other people. We eventually formed the Nolan Ryan Foundation, had a capital campaign, and built a continuing education center on the campus of Alvin Community College, which houses the Nolan Ryan Exhibit Center.

RYAN: Well, my wife, Ruth, and I both grew up there. We always returned there in the off-seasons, and we chose to raise our children there. We moved in July 2002 to Georgetown so we could be close to our children and grandchildren. We’ve since bought a house in Fort Worth, so we’re back and forth during the season. I’m spending more time up here than in Georgetown.

RODGERS: So after all these years, you’re still in baseball…

RYAN: Yeah. Well, I really thought that my involvement on a day-to-day basis with baseball was behind me. But when this opportunity [with the Texas Rangers] became available, I thought, well, if I ever really wanted to get involved with an organization, this was it. So when [owner] Tom Hicks asked if I had an interest in this position, I said yes.

RYAN: Well, thank you. It’s a pretty tough place to have to come to work… where you can sit in your office and look at a Major League baseball field.

RODGERS: What are some of your favorite baseball memories?

RYAN: The first one that comes to mind is being on a World Championship team with the New York Mets in ’69 as a youngster. Then each one of my no-hitters just because of how unique they were.

RODGERS: You also ranch. When you were nine or 10, you had some calves that you put in the family garage when a hurricane was coming.

RYAN: Yeah, I talked my parents into letting me lease a little pasture at the rodeo grounds in Alvin. I got my mother to take me to the dairy for a day-old calf. Paid a dollar fifty for it. Two weeks later, I went back and bought another one, and it’d gone up to two dollars. When the hurricane came, I had to move them. They were bottle calves, so we built a little stall in the garage, filled it with hay, and brought them in there. [Chuckles.] I’d get them up to four or five hundred pounds, take them to auction, and sell them, then buy me a heifer to build my numbers up.

When I got to junior high, I had to decide whether I was gonna stay in my cattle business or play sports. So I sold my cattle with the intent of getting back into it, and I did, in 1972. I started buying property, then I started ranching around the Alvin area. We also bought property in Gonzales County. Finally I accumulated enough property so that I could set up an operation. We run about 1,500 to 1,800 cows on 25,000 combined acres that we own and lease.

RODGERS: One of your ranches is the historic Ray Ranch.

RYAN: Yeah, we bought the south end of the Ray Ranch in Live Oak and McMullen counties. The ranch was in J. Frank Dobie’s book Tales of Old-Time Texas. I’ve read all his books and really enjoyed them. In fact, I’ve got a Dobie collection.

RODGERS: You also own Nolan Ryan’s Waterfront Restaurant near Three Rivers. How’d you get into that business?

RYAN: Yeah! Old-timers say when you have consistent wind like this, then that means you’re gonna have a drought. So we’ll see if that’s true or not. Drought’s good for baseball because you don’t have rainouts but bad for the cattle business. That’s what you call mixed emotions! [Laughs.]

It’s funny how you look at things. We had a rainout here one day. So we’re sitting here, agonizing over the rain, and wondering, do we call the game, or do we put people in the stands and take a chance of violent weather and having to evacuate? So we’re worrying about all that, but then I’m also thinking, “Gosh, why couldn’t this have been at the ranch?”

RODGERS: In the ’90s, you served on the Texas Parks and Wildlife Commission. When you have free time, what are your favorite places to visit in Texas?

RYAN: Probably Big Bend and Palo Duro. I like to wade-fish in the Laguna Madre because it’s unique—it has both saltwater and fresh water, and you can see the fish in the water.

RODGERS: Tell me how you got your nickname, the Ryan Express.

RODGERS: Your wife once came across one of your high school notebooks, where you listed five things you wanted to do in life. Three of them were to own a ranch, own cattle, and play Major League baseball. So you knew from real early on what you wanted to do! You’ve really accomplished a lot in your life in a lot of different areas.

RODGERS: Is there anything else you want to do in life?

RYAN: I want to spoil each and every one of my six grandchildren. And I work on it as much as I can on a daily basis.