The Hugs Not Walls Program Reunites Families Along the Rio Grande

Families separated by the border meet for a temporary embrace

Written by Tyson Bird, Photographs by Christ Chávez | From the June 2022 issue | Updated: May 27, 2022 | Filed Under: PeopleTRAVEL 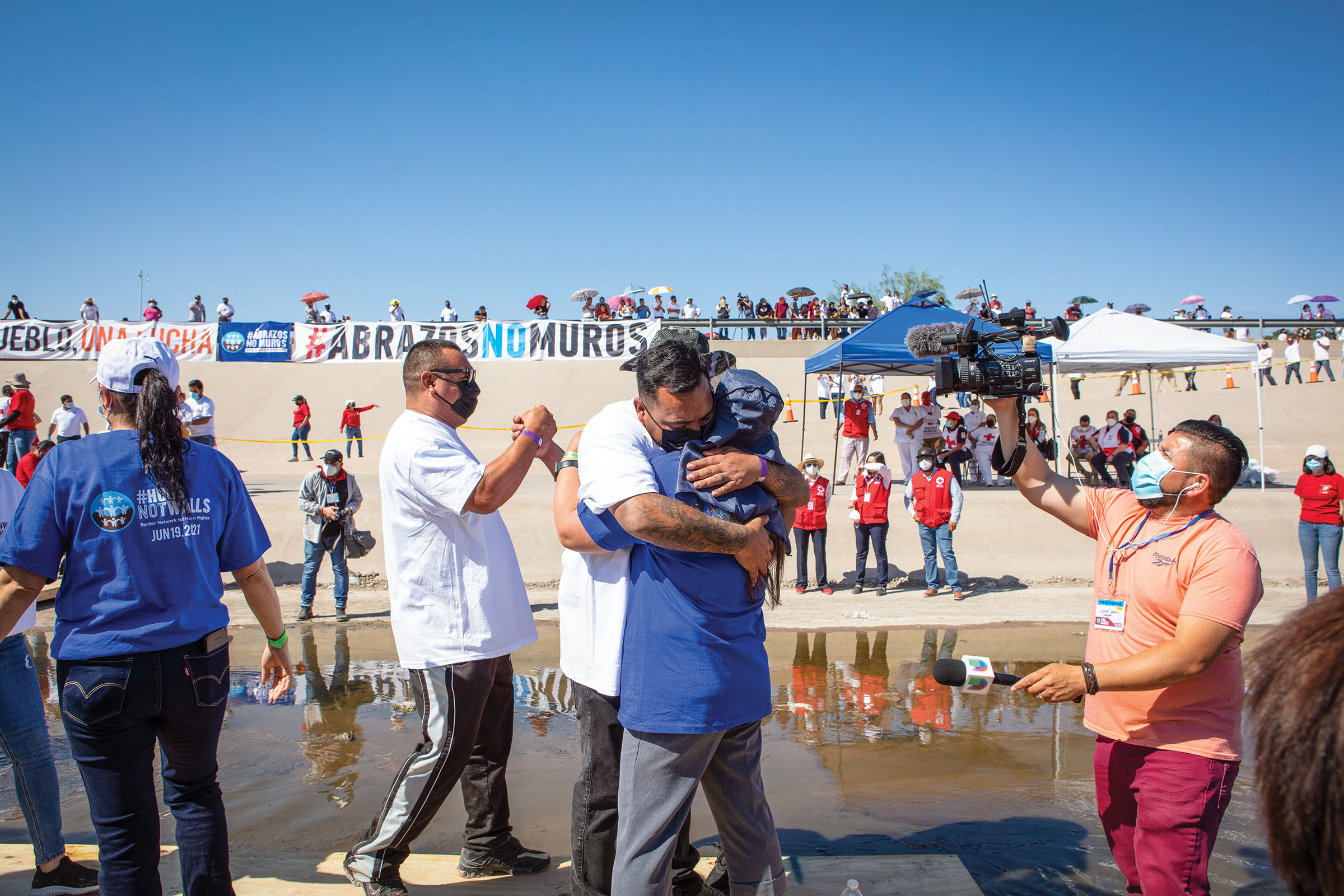 Hugs Not Walls allows families to visit for three minutes along the Rio Grande.

Hernan Hernandez and his mother, Leticia Lozano Martinez, are sitting on a park bench in South El Paso. They take cover from the sun underneath a black umbrella that rests over Martinez’s right shoulder. It’s a hot June morning in 2021. They, along with hundreds of others, are wearing blue T-shirts with #HugsNotWalls on the back.

Hernandez and Martinez wait, staring at the people forming a long line that wraps around a park and ends underneath the shade of a gazebo next to the community center in Chihuahuita, one of El Paso’s oldest neighborhoods. Not far from them, children laugh on a playground no more than 20 feet from the border wall. Hernandez and Martinez listen to other families talk among themselves. Those families are also waiting, doing anything to make time feel as if it’s passing faster, until they can finally hold the family members they came to see.

“I have two sons in Juárez,” Martinez says in Spanish. “One, I haven’t seen in 10 years. The other, 15 years.” Hernandez is the second youngest of her six children. He hasn’t seen his two oldest brothers in that same time. When he talks about how long it’s been, and how he’ll soon see them again, his eyes water. He smiles and lets out a gentle laugh that’s a combination of nerves, excitement, and disbelief.

Just two weeks before, one of Martinez’s sons in Juárez heard a radio advertisement for Hugs Not Walls, an event that allows separated families to reunite for a few minutes in the middle of the El Paso section of the Rio Grande. He gave her the number for the Border Network for Human Rights, the event organizer, and she called to find out more information. “They told me I qualified,” Martinez says.

Hugs Not Walls—hosted in partnership with the Border Patrol, the International Boundary and Water Commission, and the El Paso and Juárez police departments—is designed for families who can’t visit one another by traditional means. This is due to a variety of reasons, among them a lack of a passport, financial constraints, undocumented status, and safety.

Once Martinez told Hernandez, he researched the event and its legitimacy before he allowed himself to believe he would see his brothers again. “I looked into it,” Hernandez says, “and it was true. I said, ‘We’re going.’”

And so, here they are, along with about 200 other families—some just a single person, others as many as eight or more. All wearing blue T-shirts. All waiting to see family who, on the other side of the border, are waiting just like them. The only difference is members on the river’s south side are wearing white T-shirts.

“There are a lot of parents and grandparents here,” Hernandez says as he looks around. He then says what’s obvious, but hard to put into words—that this could be the last chance some family members, separated by a border and by a variety of other factors, will get to hug each other. “There are a lot of people out here who haven’t seen their people,” Hernandez continues. “They would like to see them at least once more before they go.” 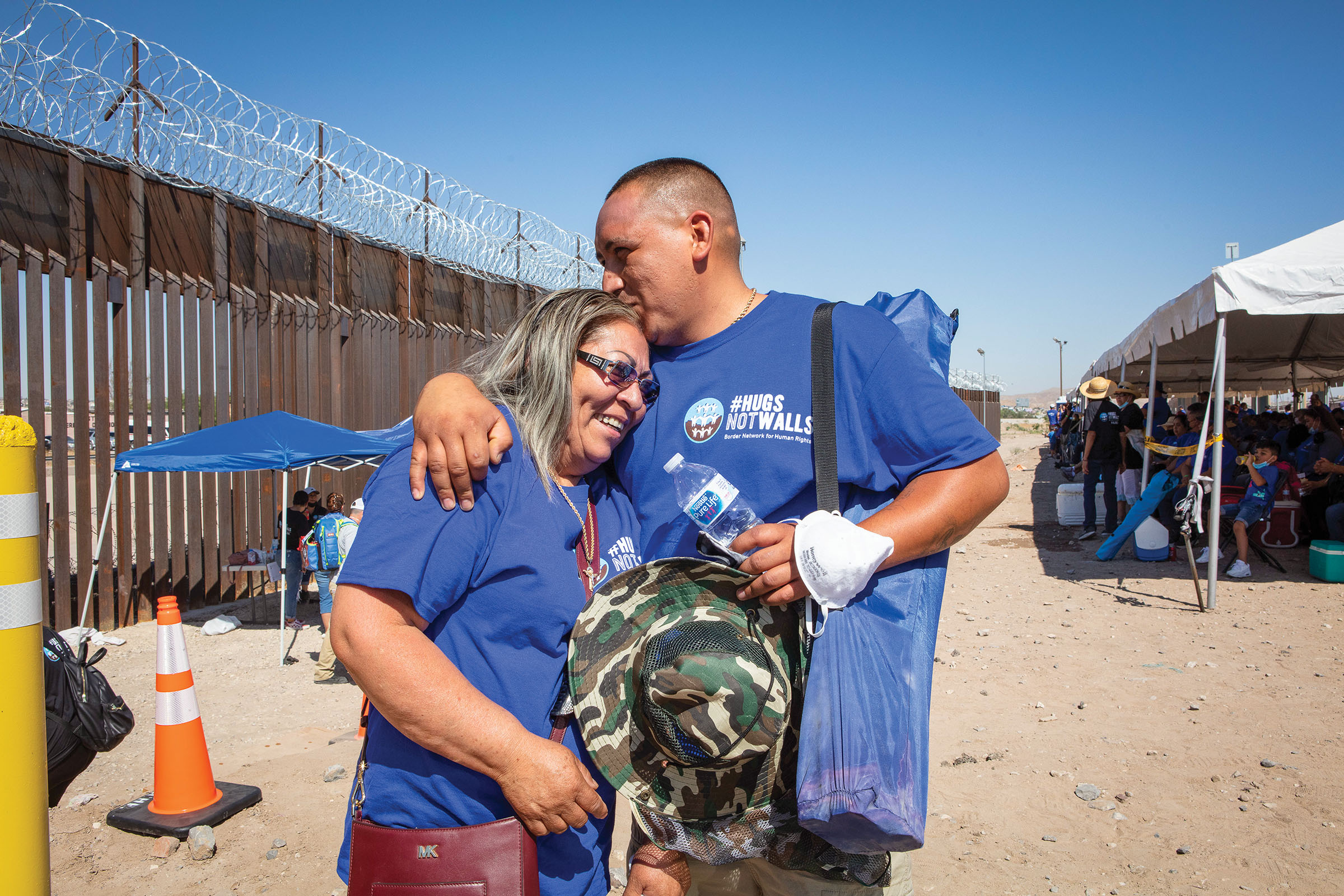 In the early 1990s, before becoming the executive director of the Border Network for Human Rights and helping create this event, Fernando García was a journalist working in Juárez. Living on the border, he couldn’t help but notice immigration’s importance. Born in Mexico City, a 20-hour drive from Juárez, García wondered about immigrant life in the United States. How immigrants crossed the border. How they survived. Seeking answers to those questions, García spent a good part of the ’90s living in immigrant communities across the country, including Phoenix, Houston, Los Angeles, New York, and Philadelphia. He then moved to El Paso in 1998 and founded the Border Network for Human Rights.

That’s how Hugs Not Walls began. García and his team would temporarily reunite families in the middle of the very border that separated them. It was a simple concept, but it required cooperation between multiple local, state, and federal agencies.

“We try to be as helpful as possible and accommodating,” says Lori Kuczmanski, public affairs officer for the International Boundary and Water Commission. Before approving the event, they’ll look at potential hazards and make recommendations for where to meet along the river.

The first event happened in 2016 and brought together almost 300 families. Since then, families have reunited in the middle of the Rio Grande on a mostly annual basis. People have traveled from Illinois, Georgia, California, Kansas, Colorado, and all over Mexico to reconnect in a space that’s neither here nor there, where they hug and touch and kiss each other. 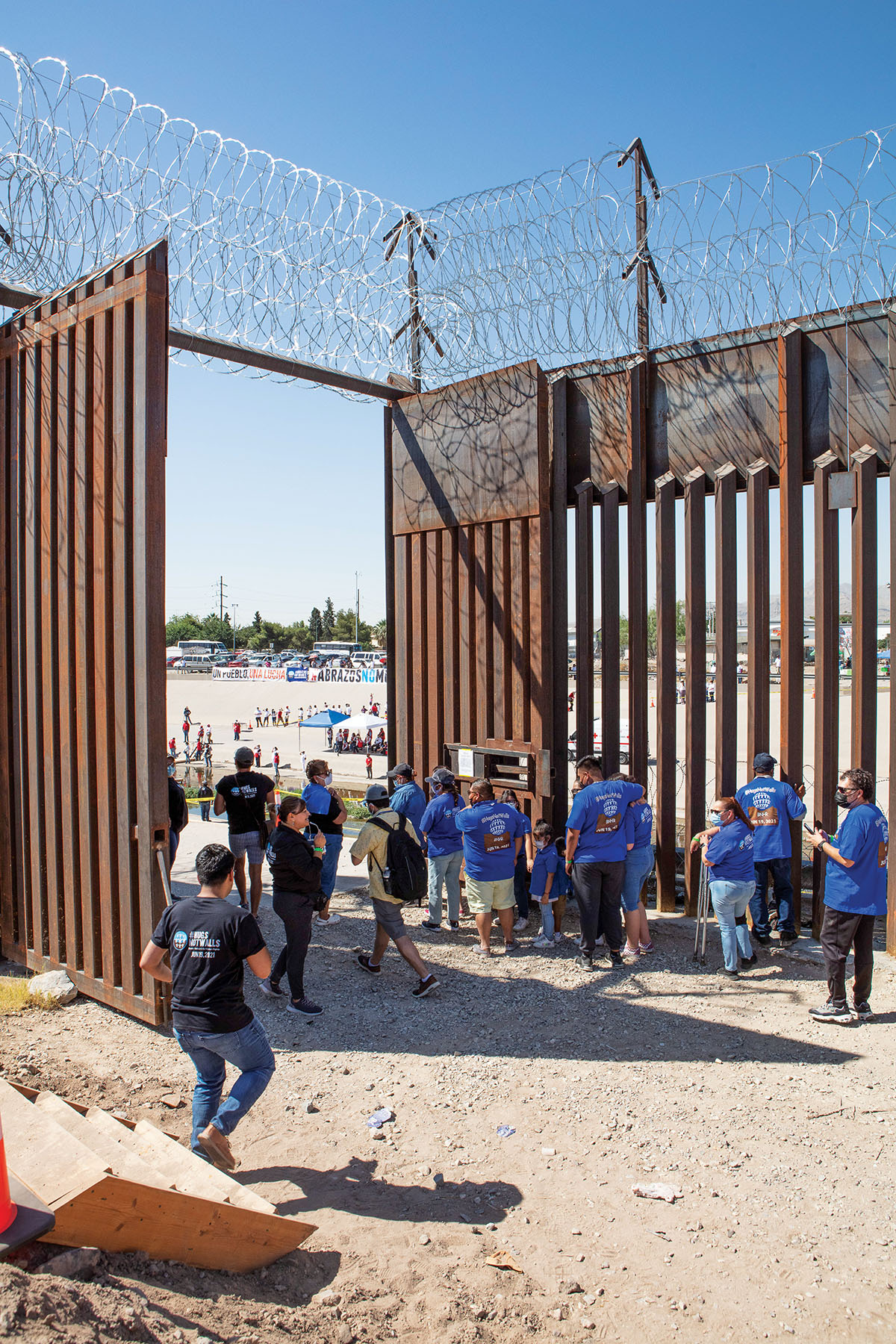 Participants file in the entrance

Hernandez and Martinez walk along the border wall, so close that if they wanted to, they could reach out and touch it. Organizers have called their number: 24. It’s their turn. Martinez asks the woman leading their walk—one of many volunteers—when the next event will take place. She says she doesn’t know. García doesn’t know either, but he hopes for some time in 2022.

As they walk, songs pour out of several speakers so loud sometimes people must raise their voices to talk. They’re Mexican songs about the border and what it does when it divides not just countries but families. They’re songs of longing, and the music only stops when a man’s voice tells families, holding each other in the middle of the border, their time is up—three minutes per family. “Tiempo, familias, tiempo.” When a family’s number is up, that same voice tells the next group of families to get ready. “Siguiente grupo de familia ya lista.”

At 9:55 a.m., Hernandez climbs the steps of a wooden platform organizers have built in the middle of the river. There isn’t much water here, but there’s enough to make mud. Once atop, Hernandez helps his mother. On the opposite side of the platform, the sons she hasn’t seen in over a decade are waiting.

They all smile through tears. They hug, saying things into each other’s ears that no one else can hear. They pull out cellphones to take photographs. It’s a moment to capture since no one here knows when they’ll see their loved ones again. They do what every other family on this wooden platform is doing: savoring the few minutes they have.

That might be the hardest part of watching it all. That moment when you can feel time moving faster than it should, and it’s back to being separated. That moment when, as García describes it, tears of happiness turn back to tears of suffering. There are so many tears that after the first couple of events, García and his team wondered if they were doing more harm than good.

“We asked families if this was fair, if this was just, if this was OK with them,” García says, “because I saw there was so much suffering. They said they wouldn’t change a thing for that moment.”

That moment is Hernandez, Martinez, and the two brothers and sons they haven’t seen in forever hugging in the middle of two countries. It’s hundreds of other families doing the same.

Hernandez and Martinez walk back, past other families waiting for their turn. Martinez’s eyes are red. She says she told her sons to take care.

“It’s been about a year since my husband died, and they didn’t get to see him,” Martinez says about her sons. “He wanted to see them but couldn’t.”

While his mother talks, Hernandez looks away and takes a drink from his bottled water as if that will help distract from his emotions. It doesn’t. His hand slightly trembles while he tries to drink away the knot in his throat.

As she keeps talking, Martinez says she’s grateful for the few precious minutes when part of her family reunited. She wishes all her family was together. She says she’ll see her sons again at the next Hugs Not Walls event—if God allows it.