Written by Art Williams, Photographs by Kevin Stillman | From the May 2017 issue | Updated: October 28, 2018 | Filed Under: Culture 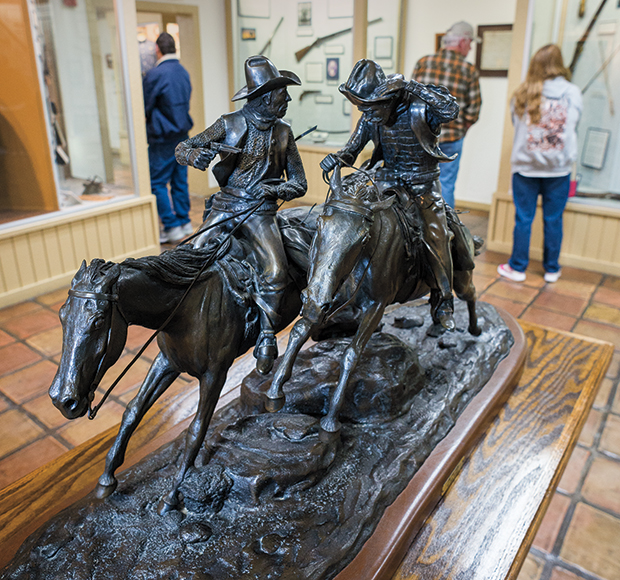 Exhibits at the Texas Ranger Hall of Fame and Museum chronicle the evolution of the agency from the 1820s through present day.

The Texas Ranger Hall of Fame and Museum in Waco has just opened for the day, and already nearly 100 fourth-graders pore over exhibits and artifacts chronicling one of the world’s most storied law enforcement organizations.

A double-dose immersion into the history of the Texas Rangers and frontier life in the mid-1800s greets visitors on the eastern outskirts of Fredericksburg, where the Texas Rangers Heritage Center sits adjacent to a reconstruction of a 169-year-old military fort.

The privately funded 12-acre heritage center includes a ring of honor centered by the star-shaped Rangers badge and a 50-foot stone bell tower that glows blue each night in honor of law enforcement.

Immediately adjacent to the Rangers site, the city of Fredericksburg continues renovation of Fort Martin Scott, which opened in 1848 as the first frontier fort in Texas. The only original facility is a stone guardhouse, but the city has erected four replica buildings as part of a long-term renovation of the outpost.

Together, they illustrate the historical overlap between the Rangers and early-day soldiers, who shared a collaborative goal of protecting settlers on the rugged frontier.

Both the center and the fort are works in progress. Former Ranger Joe Davis, president of the Former Texas Rangers Foundation, said Phase Two plans call for constructing a 26,000-square-foot main building that will feature galleries and interactive displays tracing the nearly two-century-long evolution of the Rangers from their founding in 1823. Planners hope to open the center by 2021, in time for the Rangers’ Bicentennial in 2023.

Both the Rangers center and the fort host numerous activities at their sites. Re-enactments depicting typical life are held at the fort twice a year on April 28-29 and Oct. 20-21.

As the students from Garland’s Couch Elementary pass a display of Rangers’ firepower from the mid-1840s, several try their hand at hoisting a replica of a four-pound, nine-ounce Colt Walker Repeating Pistol. Some accept the challenge to break apart and reassemble a replica of another early Colt pistol.

Located on Interstate 35, just across the Brazos River from Baylor University’s landmark McLane Stadium, the stone complex holds thousands of relics, memorabilia, documents, and artworks that, in many ways, depict the eternal struggle between good guys and bad guys. Here you can see Clyde Barrow’s pocket watch, the fictional Lone Ranger’s mask, and enough firearms, saddles, and badges to outfit a large posse.

Waco and state officials initially planned the Ranger museum in the 1960s to lure motorists from I-35, which was still under construction through the center of town. The facility is now one of a number of Waco attractions tapping into the huge traveling market, including the Texas Sports Hall of Fame, the Waco Mammoth National Monument, the Dr Pepper Museum & Free Enterprise Institute, and the famous silos of Magnolia Market, owned by HGTV Fixer Upper stars Chip and Joanna Gaines.

The museum gallery opened as the first phase of the complex in 1968. The Texas Ranger Hall of Fame, which honors 31 Rangers who gave their lives in the line of duty or performed exemplary service, debuted in 1976.

Executive Director Byron Johnson, whose 21 years of experience at the museum are evident in his easy recall of all things Ranger, recounts the “one-riot, one-Ranger” axiom that has come to exemplify the division’s bravado.

As Johnson tells it, the phrase is often credited to Ranger Captain Bill McDonald in the late 1800s, after he was sent to prevent an illegal prize fight. “You’ve only got one prize fight,” McDonald told an astonished official. “You only need one Ranger.” But Johnson says there have been variations on the origins of the famous saying, acknowledging the line between truth and legend is hard to distinguish. “The two things you can say are that it’s a legendary saying, and it’s applied to the Rangers.’’

Johnson’s team—as well as the entire community of Rangers and ex-Rangers—are preparing for a major milestone early in the next decade when the state observes the Rangers Bicentennial in 2023. “It sounds like a long way off, but it isn’t,” says Johnson, outlining preliminary plans that include community celebrations, a website, educational programs, TV documentaries, and other activities and productions. 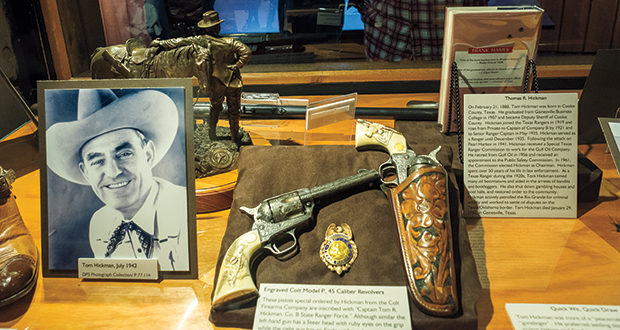 The Rangers trace their origin to 1823, when “father of Texas” Stephen F. Austin commissioned 10 men to act “as rangers for the common defense” to protect his young frontier colony.

Over the ensuing decades, the Rangers underwent varying incarnations, from fighting Native Americans and chasing desperadoes to emerging into a 21st century force whose crime-fighting duties have expanded to include border enforcement and public corruption investigations. They have been part of the Texas Department of Public Safety since 1935 and remain an elite force that now numbers over 160 and includes women as well as men. Rangers still wear white hats and circle-star badges fashioned from five-peso Mexican coins, a tradition rooted in the late 1870s and made official in 1963.

“Like every other organization, they’ve had to change with the times,” says Johnson, who sports a gold tiepin shaped like a Ranger badge. “And as the times have changed, they’ve adapted to it.”

The museum chronicles every step in the Rangers’ evolution. An eye-catching exhibit greets visitors shortly after they enter with a life-size display of a faceless mounted Ranger from the 1840s. A single-shot plains rifle hangs over his Mexican vaquero saddle while a single-shot pistol tucks into his belt in lieu of a holster, and a large gourd serves as a canteen.

One of the most popular attractions tells of the exploits of Depression-era outlaws Clyde Barrow and Bonnie Parker and the man who tracked them down—legendary Ranger Frank Hamer. The display includes a menacing looking Colt Monitor machine gun used in the law enforcement ambush that felled the couple in 1934 as well as three long guns taken from their car. Visitors can examine an Elgin pocket watch—engraved “Clyde B”—that Barrow left behind after he escaped from the Waco jail.

The museum recently renovated a pop culture section devoted to fictional heroes who have perpetuated the Rangers’ legend, including the Lone Ranger of radio, TV, and movie fame, and the more recent Walker, Texas Ranger TV series, which ran from 1993 to 2001.

Museum Marketing and Development Specialist Christine Rothenbush says the museum staff continuously looks ahead as it asks modern-day Rangers to contribute cellphones, date planners, records, discarded equipment, and other items that could ultimately become museum artifacts of the future.

“We once had somebody ask us, ‘Why are you collecting cellphones?’” she says. “Think about it—in a hundred years from now, how hard is it going to be to get that. Wouldn’t you love to have the date planner for Frank Hamer? Well, it’s the same thing.”