Originating in Southeast Houston, slab culture was popularized by the hip-hop scene 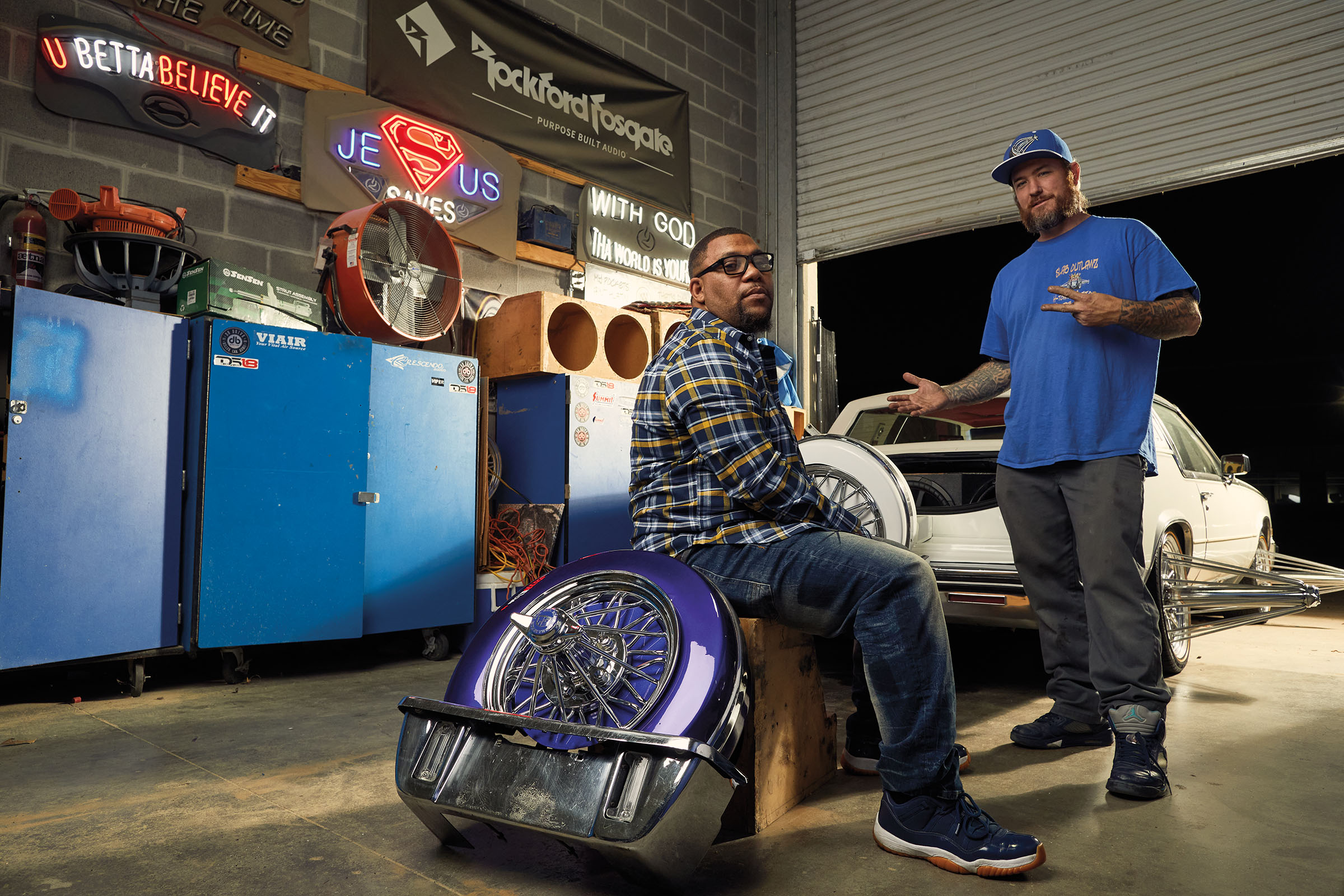 If you’ve spent significant time on Houston roadways over the past few decades, you’ve probably seen one: a low-slung, candy-colored vintage sedan, like a Jolly Rancher on wheels, with its rims poking out and a spare tire mounted on the rear bumper. Even before you saw it, you may have felt the teeth-rattling bass and heard the molasses-slow rhythm of Houston hip-hop emanating from the stereo system in the trunk. If so, you were in the presence of a “slab,” Houston’s distinctive contribution to American car culture.

One of the foremost practitioners of this art form is Kevin Mitchell, aka “Meyagi,” a chemical operator at National Oilwell Varco who lives in the Houston suburb of Pearland and has been building slabs since the early 2000s. On a Friday afternoon in October, I met Mitchell at Ricardo’s Auto Upholstery in northeast Houston, where he showed me his latest creation: a 1994 Cadillac Fleetwood he has spent the past year—and about $22,000—transforming from a broken-down, rusted-out piece of junk into the slab of his dreams. “Most people would have looked at it as a box of bolts,” Mitchell said, “but I could already see the picture in my head.”

After fixing up the engine, Mitchell started in on the modifications. He installed a panoramic sunroof scavenged from a Cadillac SRX, side-mirror turn signals taken off a late-model Mercedes-Benz, brake lights from a different Cadillac, and a custom-made chrome grille. Finally, he added the wheels—four for the tires, one for the external spare (also known as a continental kit), and a sixth molded horizontally into the rear dash. 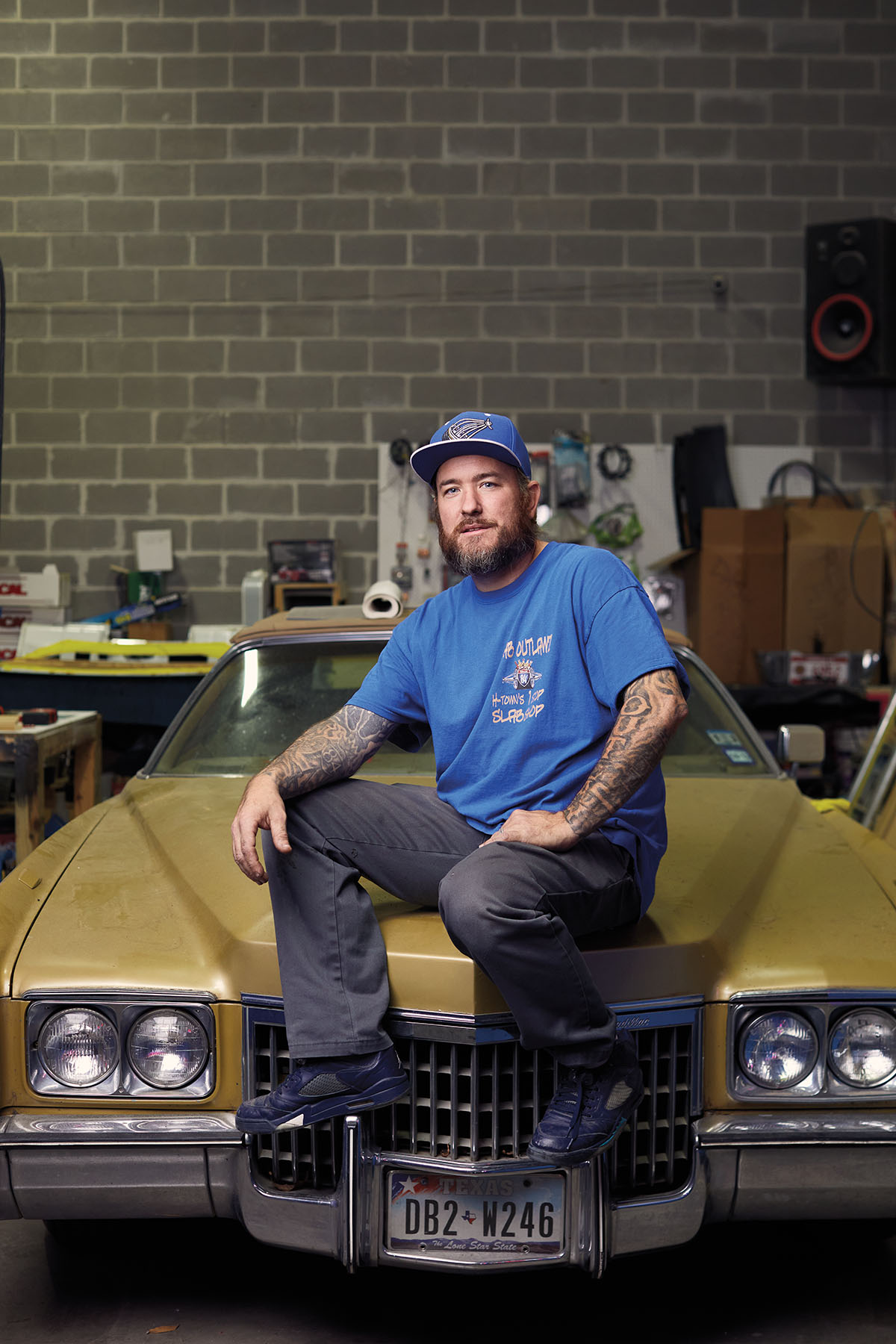 He then had the car painted a bright cobalt blue. After completely gutting the Fleetwood’s original interior, he installed four bucket seats covered in cream-colored leather. All that remained was to install the hi-fi stereo system—powerful enough to require a separate battery—and the pop-trunk sign, a slogan or logo affixed like a plaque to the underside of the trunk door, visible only when the trunk is popped. Mitchell chose “Mr. All-Blue Everything.”

Slab culture emerged from the working-class African American neighborhoods of southeast Houston in the early 1980s. During a historic oil bust that drove high unemployment, many young men turned to manufacturing or selling crack cocaine, according to Langston Collin Wilkins, who grew up in Houston’s Hiram Clarke neighborhood and wrote about this topic for his doctoral dissertation at Indiana University on hip-hop music and Houston street culture. Although most street-level dealers lived hand to mouth, the higher-ups began amassing serious money, and they wanted to let everyone know it. “They wanted their cars to be an outward projection of their personality and their identity,” Wilkins said.

Inspired by the “pimpmobiles” popularized in 1970s blaxploitation films like Superfly and The Mack, these dealers began buying big-bodied Cadillacs, Buicks, Lincolns, and Oldsmobiles, and customizing them with garish paint jobs and lavish interiors. And then they “hit the slab,” a reference to the concrete slab of the street. Over time, the term was transferred to both the cars themselves (“slabs”) and the act of driving them (“riding slab” or “holding slab”).

In 1983, Cragar Wheels introduced a new 30-spoke rim, intended for the Cadillac Eldorado, that poked out a good 4 inches beyond the tires, like the spikes on the wheels of Roman chariots. The look immediately caught on in Houston, where these singular rims became known as “elbows” or “swangas” and catalyzed the slab form. Cragar discontinued the design after two years upon deciding they constituted a road hazard—although they remain street legal in Texas, as long as the car’s total width doesn’t exceed 8 feet. Because of their rarity, ’83s and ’84s became status symbols.

Over time, slabs developed their other distinctive features, but Cragar rims, or their latter-day imitations, remain the essential component. Mitchell estimates that by the ’90s there were as few as 50 sets of original Cragar wheels in Houston. With prices as high as $10,000 for a set of four, the only way the average Houstonian could acquire the rims was to buy them on the black market or steal them off somebody else’s car. “They were called ‘dead man’s wheels,’” said B.G. Porter, owner of the Slab Outlawz body shop in northeast Houston. “People would kill for them.”

That all changed in 2005 when Texan Wire Wheels began selling Cragar replicas for a fraction of the cost of the originals. Suddenly, anyone with a few thousand dollars could get their hands on the rims. Houstonians from all walks of life began building their own slabs and joining slab lines—social clubs composed of people who drive cars of the same color. “Now that the wheels are readily available, you’ve got corporate people buying them for their cars,” Porter said. “It’s anyone and everyone.” 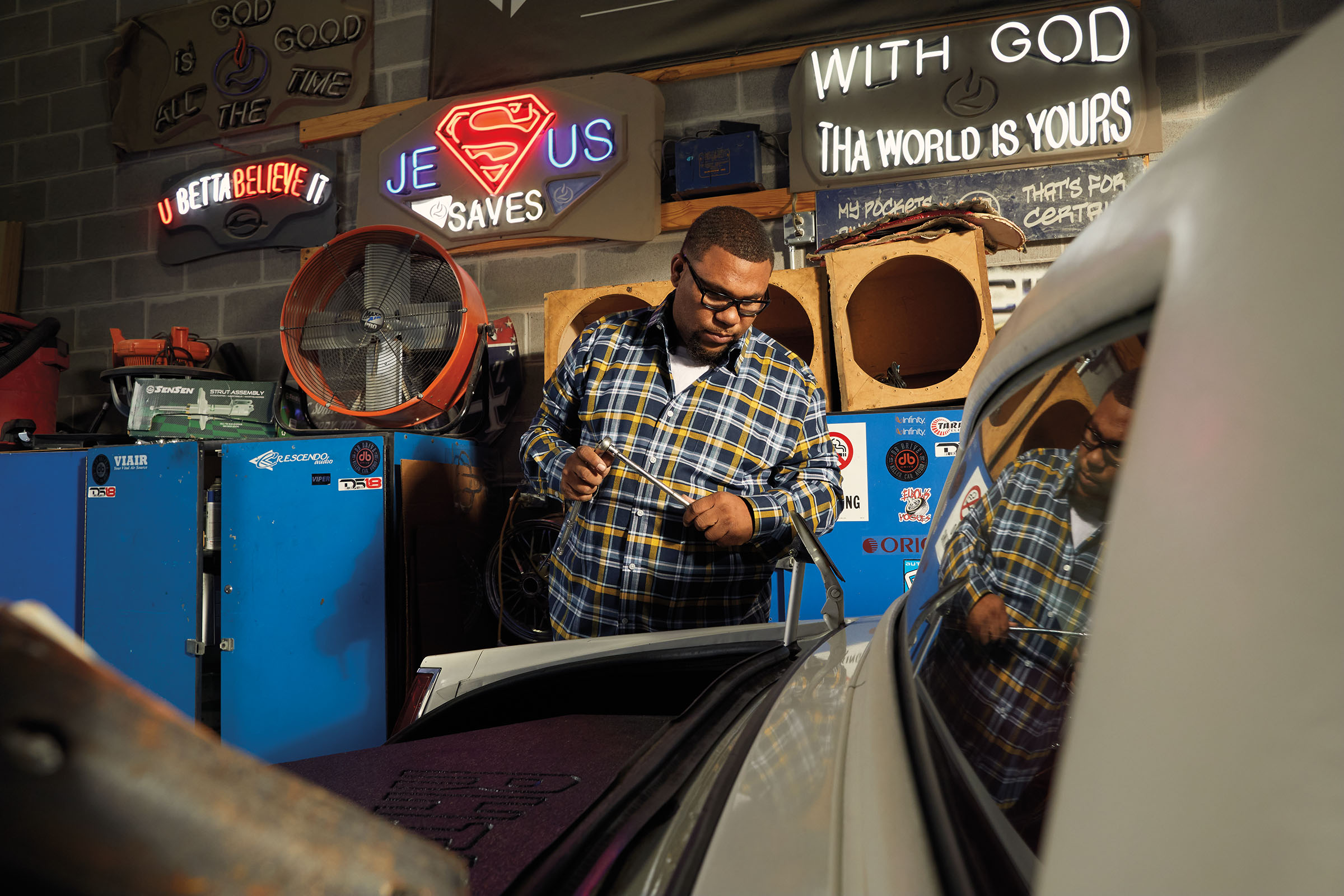 Thanks largely to the popularity of Houston hip-hop, slabs have gone national. Houston rappers have name-checked slabs since the early ’90s, when DJ Screw pioneered the city’s slowed-down, bass-heavy, “chopped-and-screwed” style of hip-hop. In the early ’00s, hit singles like Mike Jones’ “Still Tippin’,” Paul Wall’s “Sittin’ Sidewayz,” and Chamillionaire’s “Ridin’” introduced the country to swangas, pop trunks, and other slab slang. Mitchell has met slab owners from Florida, Kansas, and New York. Even West Coast rappers, known for their lowriders that sit close to the ground and often have hydraulics that make them bounce but have none of slabs’ qualifying features, have caught the bug—Mitchell helped design the interior for a slab Snoop Dogg purchased.

“Slab is Houston culture,” said Houston rapper Slim Thug, who built his first slab, a Buick Riviera, when he was 17. “Growing up here, when you saw a cool guy in your neighborhood, he was gonna have a slab. It was clean, and it was something you looked forward to having as you got older.”

Slab culture has established a national foothold, but many Houston residents remain antipathetic due to its historical association with the criminal underworld. In 2013, Wilkins saw an opportunity to change that. He worked with the Houston Museum of African American Culture (HMAAC) and the city-funded Houston Arts Alliance to organize the Houston Slab Parade and Family Festival, a 50-car parade through Houston’s South Park neighborhood, with a concert, food trucks, and children’s activities. The one-off event attracted about 4,500 people and was covered widely in the local press. Beyoncé later incorporated footage of the parade into her music video for “No Angel.”

“If you’re from the Houston Black community, slab is something you’re really proud of,” HMAAC CEO John Guess Jr. said. “So how come this is celebrated in other parts of the country, but in Houston it’s seen as something negative? I thought it was important we celebrate that culture.”

For all its newfound popularity, slab culture still has high barriers to entry. You can’t walk into a dealership and order a slab—it’s either DIY or find someone who knows what they’re doing. You’ll have to rely on the far-flung and relatively clandestine network of small businesses that has grown up over the decades to service the scene: body shops, paint shops, wheel dealers, grille manufacturers, pop-trunk sign makers, and so on. When Chad Cartwright, an overseas contractor for Halliburton and KBR, first got into slab culture in the early ’00s, he had a hard time connecting with other enthusiasts.

“At that time, no one in the city was doing much for slab culture,” Cartwright recalled. “Lowriders had their own magazine, their own shows. I wanted to do something for our culture so it would be taken seriously.” In 2003 Cartwright launched rollin84z.com, a website devoted to slabs, followed by Slab Ridaz magazine in 2009. With the help of Mitchell, Porter, and others, he also started organizing slab parades and shows. Today, there are several annual slab events in Houston, and on most weekends you can find gatherings at MacGregor Park in Third Ward.

As long as there have been cars, there have been car customizers. Think of the Southern California hot-rod enthusiasts who “chopped and channeled” Detroit muscle cars to make them look more aerodynamic, as Tom Wolfe wrote about in his famous 1963 Esquire magazine story “The Kandy-Kolored Tangerine-Flake Streamline Baby.” Just like slabs, hot rods were originally associated with an illicit activity—drag racing—and attracted unwanted attention from the police. But both subcultures can also be viewed as part of the long American tradition of turning automobiles into art.

“It’s like a canvas,” Mitchell said, gazing lovingly at his soon-to-be-completed Cadillac Fleetwood. “You can paint whatever you want; you can put it together how you want. It’s your masterpiece.”

Cadillac, Buick, Lincoln, and Oldsmobile sedans manufactured between 1970 and 2000 are ideal for slabs. But you’ll occasionally see SUVs, pickup trucks, and luxury cars that have been given the treatment. Foreign cars are a no-no. Here’s how to customize yours.

The Houston Slab Holiday Car Show at Wonder Brewery—the most popular event of its kind—takes place every June.