Written by Matt Joyce | Updated: May 27, 2022 | Filed Under: CultureThings to DoTravel News 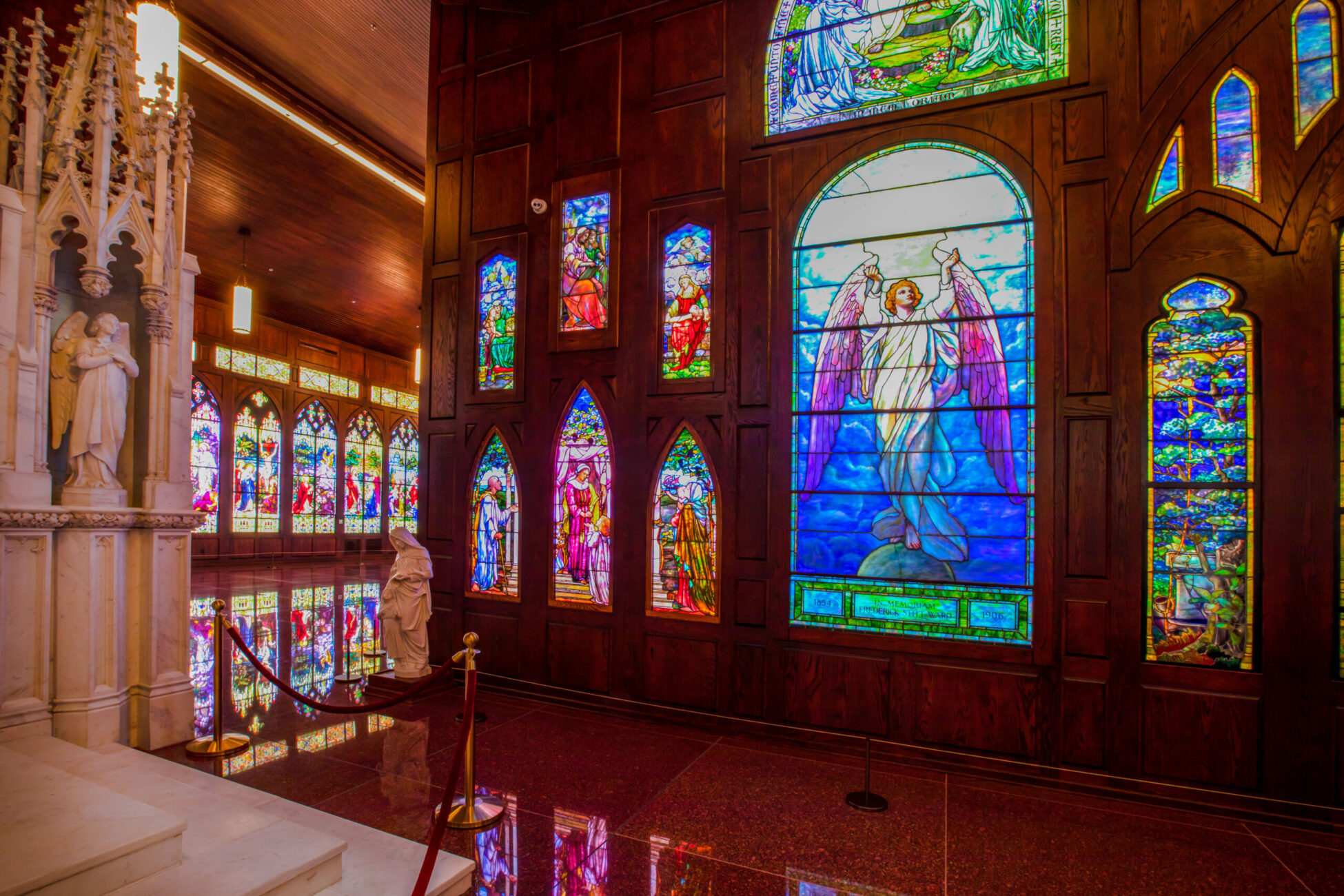 A wall of stained glass windows in the Gelman Stained Glass Museum in San Juan. Photo by Larry Ditto

Editor’s Note: A shorter version of this story appeared in the June 2022 issue of Texas Highways.

Walking into the South Chapel of the new Gelman Stained Glass Museum in San Juan, Dr. Lawrence Gelman points toward a large three-paneled window high on the wall: The resurrected Christ in a pearl white robe stands before winged angels and a woman in a pomegranate-colored cloak. A spectrum of colors, from cobalt blue clouds to lemony sunlight, streaks the horizon. Opalescent flower petals matching Christ’s robe appear to nod from a passing breeze. To Gelman, it’s “perfect.”

“Look at that,” he says with sincere admiration. “It all goes together. There are no blemishes. Look at the colors, the shadowing, the faces. And the sunlight. If you look at that whole window, it’s perfect. It’s a complex window and it all works.” 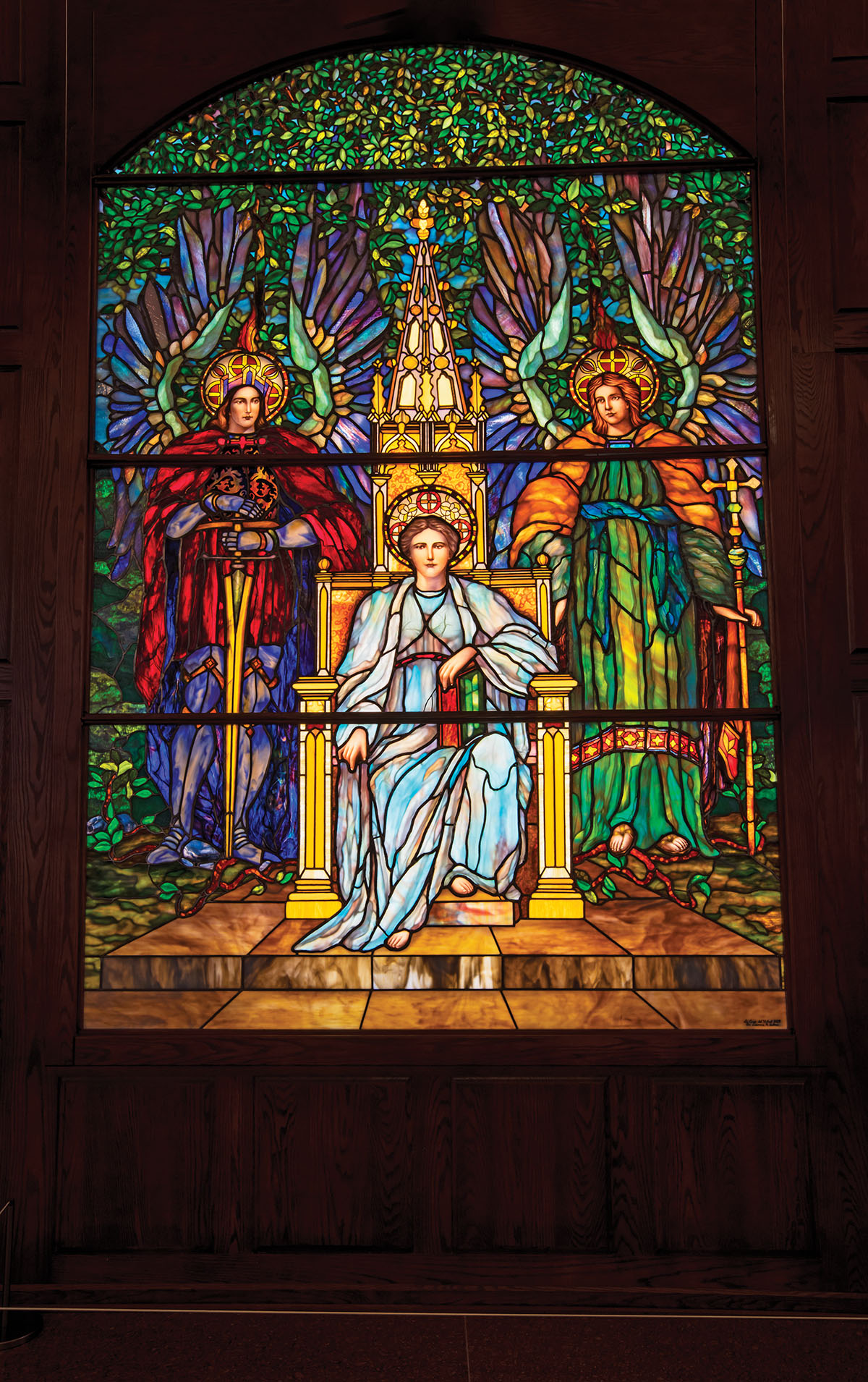 A reproduction of Religion Enthroned is housed at the Gelman Stained Glass Museum near the Texas-Mexico border.

After collecting stained glass for more than 30 years, Gelman opened the museum in the Rio Grande Valley last December to display 174 sets of church windows, mostly dating from the late 19th and early 20th centuries, a golden period in America for stained glass craftsmanship. The museum’s floorplan follows a cruciform layout of the Latin cross and is divided into three gallery spaces. Across from the South Chapel, the North Chapel is also called the “Tiffany Chapel” for its abundance of windows from the New York studio of celebrated stained glass designer Louis Comfort Tiffany.

The high-ceilinged main gallery walls are lined with dazzlingly colorful church windows designed by John LaFarge, Mary Tillinghast, and other artists and prominent glasshouses from the turn of last century. Each piece is set into dark red-oak walls; the museum’s backlighting system was designed to replicate natural light to ensure the glass is always viewed under optimal conditions.

Except for two commissioned pieces for the museum by La Casa del Vitral, in nearby Edinburg, the windows were acquired from American churches (several denominations). Most depict biblical scenes while including the names of the parishioners who were also being memorialized within the church’s very architecture.

“We try to remind visitors about what can happen to these artifacts when churches close,” says Miriam Cepeda, the museum director. “We’re proud to preserve the art of the churches and the histories of the individuals who these windows are dedicated to.”

Still, a majority of windows here, including the previously mentioned “perfect” window, come from Tiffany, which is Gelman’s favorite. “It has to be a Tiffany window, or something really special,” he says, explaining his pragmatism when acquiring different designers. “It has to be something that is of a different nature than what I already have.” 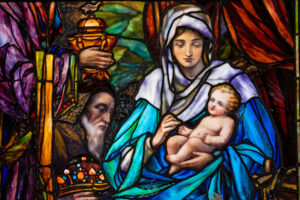 The museum’s showpiece window, a Tiffany masterpiece referred to as Te Deum, illuminates the far end of the gallery with cool blues and purples, metallic golds and yellows, and a burst of brilliant white toward the top. When Gelman stops at this piece, measuring 40-by-15 feet, the colors clarify into dozens of individuals—New Testament figures on the left, Old Testament on the right—their faces all brightened by celestial light from above. It’s easy getting lost within such colorful detail.

was installed in First Presbyterian Church in Syracuse, New York, around 1906. After the church closed in 2012, Gelman acquired this epic stained glass treasure.