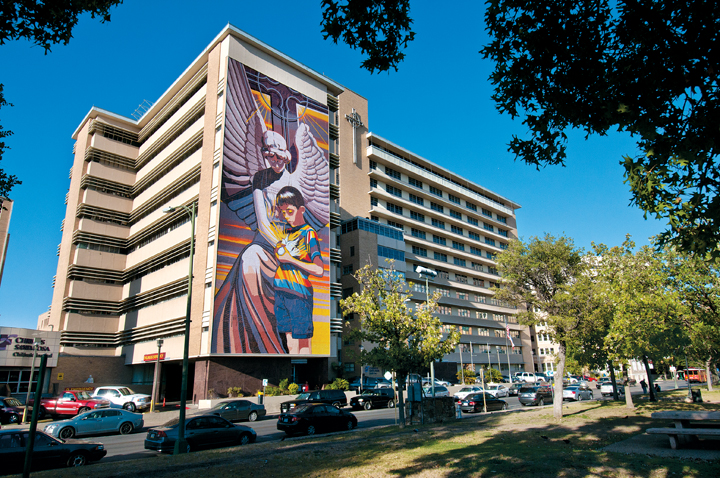 One of artist Jesse Treviño’s most visible pieces of public art, a nine-story mosaic mural titled Spirit of Healing, enlivens the side of Christus Santa Rosa Children’s Hospital. (Photo by Kevin Stillman)

Driving northbound on I-35 through downtown San Antonio affords a clear view of the city’s Christus Santa Rosa Children’s Hospital, where a nine-story, tiled mural called Spirit of Healing features an image of a young boy holding a dove while an angel watches over him. For San Antonio artist Jesse Treviño, who completed the mural in 1997, the intricately tiled artwork expresses a simple and enduring sentiment.

“The dove represents life, and the spirit of life,” Treviño says. “We must take care of that child—all children—and guide them as they grow older. Also, the guardian angel has part of her wing broken, which represents that you don’t have to be perfect. The message is simple and symbolic.”

Treviño, 65, is internationally lauded for his realist paintings and his public artworks representing the history and cultural institutions of Mexican Americans. More than 40 years ago, after losing his right arm (originally his painting arm) in Vietnam, he first looked home to San Antonio to inspire his recovery. To a great extent, his life’s work since then has been dedicated to honoring the generations who struggled before him; and through his public art, he has never stopped giving back to the West Side neighborhood that serves as his muse.

Born in 1946 in Monterrey, Mexico, Treviño moved with his family first to New Braunfels before settling west of downtown San Antonio when he was four. “When I was a child,” he says, “I would walk to Crockett Elementary School and re-imagine the houses as I passed, thinking, ‘What would I do to this house to make it beautiful?’”

A few years later, the Witte Museum held a wildlife-drawing contest, and six-year-old Treviño entered and won an award, basking in the attention it afforded him (which was hard to come by in a family of 12 brothers and sisters). Encouraged by his teachers and family, he began pursuing opportunities to hone his artistic skills, eventually earning scholarships to both the Chicago Art Institute and to the Art Students League in New York. Relatives in the Bronx agreed to let Treviño live with them, so in 1966 he entered art school.

And then came his draft notice.

“I have to admit, I didn’t know a lot about Vietnam,” he says. “But I had four brothers who had been in the service, though not in Vietnam. I thought going was the right thing to do,” he says.

After serving three months in the Mekong Delta, Treviño was struck by shrapnel and a sniper’s bullet along his right side, severing a nerve in his right arm. As he lay bleeding, waiting for either help or death, he says he felt his first impulses to honor and preserve his family, his neighborhood, and his culture through his artwork.

Treviño was awarded the Purple Heart and spent two years rehabilitating, but his right arm was eventually amputated below the elbow. Although initially he despaired at the loss of his arm, his family encouraged him to enroll in San Antonio College, where he learned to draw and paint with his left hand and earned an associate’s degree.

Treviño’s recovery coincided with the emergence of Chicano artists and intellectuals in San Antonio and other cities across the country. Treviño took (and still takes) great pride as a member of that movement, and while earning a bachelor’s degree in art from Our Lady of the Lake University, his reemergence as an artist took the form of his first public mural. Completed in 1974, La Historia Chicana is a striking, four-sided work spanning six centuries of Mexican-American heritage. Originally painted on the walls of the student union building, it’s now prominently displayed inside the university’s Sueltenfuss Library.

“Like many other artists of his era, Treviño actively sought to explore, affirm, and represent Chicano or Mexican-American culture that had been devalued in the larger society,” notes E. Carmen Ramos, Assistant Curator for Latino Art at the Smithsonian American Art Museum in Washington, D.C. “What is fascinating about Treviño is how he blended these political and cultural concerns with a visual style that is associated with the larger American movements of pop art and photorealism.”

“After Vietnam,” Treviño says, “I had a reawakening and began to appreciate the beautiful things that were in my community and ready for me to paint. Like many Chicano artists, I was interested in my roots. There is so much here that I could work the rest of my life and never capture it all.”

For instance, Treviño painted the classic cars, street vendors, and corner businesses that once populated the neighborhood where he grew up and still lives. Many of those works are held in private collections and museums, like the San Antonio Museum of Art and the LBJ Library and Museum in Austin. In 1994, the Smithsonian American Art Museum inducted two of his paintings into its permanent collection. The following year, the San Antonio Museum of Art honored Treviño with a one-man show, and in 2009, San Antonio’s new Museo Alameda hosted a retrospective of his work.

But numerous original works of art by Jesse Treviño can be viewed outside a museum setting (see sidebar). “When you travel through San Antonio’s West Side, you’ll see many beautiful works of public art,” says Arturo Almeida, art specialist for The University of Texas at San Antonio and curator of the school’s art collection. “The mural at the Wells Fargo Bank is one of his most beautiful works. And it shows that what’s important to Jesse Treviño is capturing Mexican culture and Latin-American culture at the heart of the West Side.”

One of Treviño’s current projects, La Ofrenda, is a 130-foot-tall, steel-and-epoxy veterans’ monument commissioned by the City of San Antonio, which will be installed at Elmendorf Lake at Our Lady of the Lake University. Treviño estimates its completion in 2013 and says that it will express a simple and enduring sentiment: “Service and sacrifice are not forgotten.”

From the January 2012 issue