Written by Art Williams, Photographs by Michael Amador | From the May 2015 issue | Updated: June 18, 2020 | Filed Under: Culturemade in texas 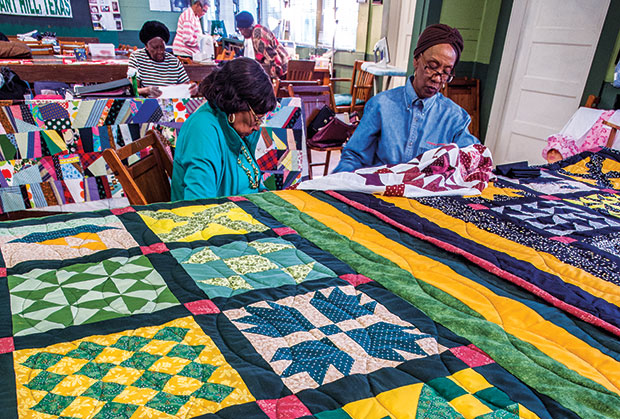 Alvis Dorsey and Flo Stevenson work on a quilt at the historic Pleasant Hill School.

LaJoyce Flanagan is sitting in the Linden schoolhouse where she taught more than 50 years ago, recalling the tiny desks and chairs, the children who stayed late for sewing lessons, and the day the radio delivered news of President Kennedy’s assassination.

These days, the two-classroom building tucked in the Piney Woods of northeast Texas no longer echoes with the chatter of schoolchildren. Instead, you’ll hear the whir of sewing machines, the singing of spirituals, and the memories of Pleasant Hill, one of Texas’ oldest African American communities.

The Pleasant Hill School, built in 1925 to provide education for African American children, closed in 1964. Although the building continued to function as a space for community and church events, it deteriorated until a local preservation group secured a $50,000 grant from the Lowe’s Foundation through the National Trust for Historic Preservation to restore the schoolhouse in 2008. That’s when the Pleasant Hill Quilting Group adopted the building as its workshop, where members can be found each Monday making quilts that memorialize African American history and raise money for the schoolhouse’s upkeep. (The group breaks during the summer, from June through August.)

Inside the white, wood-paneled schoolhouse, vintage school desks sit in front of the school’s historic stage curtain, which bears the names of bygone businesses that sponsored the curtain’s purchase. Visitors dropping by on a typical Monday will get an inside look at the artisans at work, from laying out patterns to placing the final stitches, and a history lesson on the significance of the old school to its students, teachers, and community.

“The young people come back and they tell me what a good teacher I was and how I made an impact in their lives,” says Flanagan, now 79 and a founding member of the quilting group. “[The school] meant a lot to me.”

You’ll hear the whir of sewing machines, the singing of spirituals, and the memories of Pleasant Hill, one of Texas’ oldest African American communities.

Ranging in age from 63 to 96, the 15 women of the Pleasant Hill Quilters travel the country in their 25-passenger Ford F-250 minibus visiting high schools, universities, concert halls, and churches from Texarkana to Tuskegee to showcase their patchwork. In their nearly two dozen performances per year, the quilters weave together the African American traditions of quilting and spiritual hymns like “Wade in the Water” and “Steal Away,” songs associated with slaves fleeing to freedom on the Underground Railroad. Displaying a completed quilt onstage, the women explain how runaway slaves and their supporters used quilt patterns to communicate messages along the network of routes, sympathizers, and safe havens that helped the fugitives escape to freedom in the days before abolition.

Flo Stevenson, a founding member of the Pleasant Hill Quilters, says she discovered the historical significance of African American quilts in 2004 when she found one made of faded, tattered fabric at a flea market in Montgomery, Alabama. Or, as she tells it, the quilt found her.

“It was kind of like the quilt spoke to me and said ‘buy me,’” Stevenson says.

Stevenson was drawn to the quilt’s familiar “monkey wrench” pattern, a collection of rectangles and right triangles made to resemble a wrench. She had recently read about the pattern in a book, Hidden in Plain View: A Secret Story of Quilts and the Underground Railroad, which describes how symbolic patterns in African American quilts were used to covertly convey messages to fugitive slaves fleeing to safety and freedom in the early 1800s. For example, according to oral history recounted in the book, the “monkey wrench” pattern represented a figure on the plantation,
such as a blacksmith, with extensive knowledge of escape routes. A “flying geese” pattern pointed fugitives in a certain direction.

While the book has sparked debate among historians about whether the quilt code system falls under fact or folklore, Stevenson says the tale is indicative of restrictions that discouraged and often banned literacy among slaves. “If you were caught teaching a slave how to read, you were in trouble and the slave was in trouble,” Stevenson says. “Oral history is all that we had.”

In 2004, Flanagan and Stevenson formed the quilting club to create their own quilts fashioned after the secret-code patterns. Along with members of the close-knit Pleasant Hill community, the women embarked on a plan to teach younger generations about their ancestry and help preserve a legacy that could otherwise fade from view. 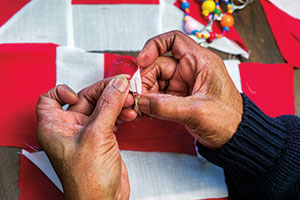 Vernelle Richardson hand-stitches a monkey wrench block for one of the Pleasant Hill Quilting Group’s blankets.

The club found a fitting home in the restored schoolhouse, which itself is an important artifact of African American history. The 1925 schoolhouse was one of more than 5,000 Rosenwald Schools built across the South between 1917 and 1932. Booker T. Washington, a prominent African American educator and author, and philanthropist Julius Rosenwald, part owner of Sears, Roebuck and Co., created the program to address the dismal conditions of black schools in the Jim Crow South. While schools for black children typically focused on manual labor and homemaking, the Rosenwald program built new schools that advocated a curriculum of reading and math, as well as agriculture.

Amid the organized jumble of material, thread, and patterns familiar to any avid quilter, the Pleasant Hill schoolhouse still displays remnants of the Rosenwald days. Photos of former students and teachers line the walls, including one of Flanagan—one of the last two teachers at Pleasant Hill—standing proudly next to a group of students modeling clothes she taught them to make.

Whether through their craftwork commemorating the Underground Railroad and African American oral history or their promotion of the Pleasant Hill School’s historic importance as a Rosenwald School, education is at the heart of the Pleasant Hill Quilting Group’s purpose.

“I always wanted to be a teacher,” Flanagan says. “And I’m still teaching.”