The Commitment of Six Generations at Hillingdon Ranch 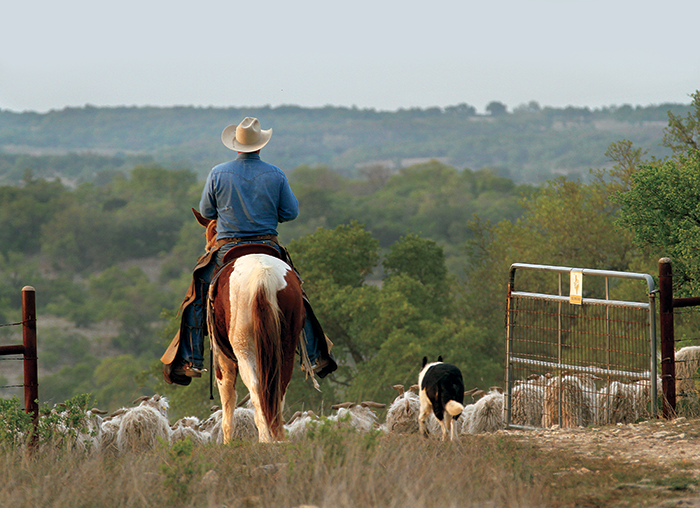 Grant Giles herds goats through a gate on Hillingdon Ranch.

We both grew up on ranches, separated by time and distance, but bound by common experience. Life on the land teaches you many lessons, including that behind every ranch gate, there’s a story to be told. In Hillingdon Ranch: Four Seasons, Six Generations, we tell the story of the Giles family. It’s a story of history, family, adversity, and triumph; of perseverance, ingenuity, and the ability to change with the times.

Today, adapting to the times means the Gileses have incorporated ecotourism into their operation. It diversifies their income stream and gives their neighbors a chance to experience Texas’ legendary wide-open spaces firsthand. The Gileses and their kin offer hunting, nature and livestock seminars, photography workshops, B&B experiences, and mountain bike trails.

The Gileses’ experience reflects that of thousands of other ranching families across Texas. By opening their gates, ranches not only help keep their land intact, but also share outdoor experiences with their fellow Texans, creating a deeper appreciation for the value of open space.

Of course, ranches produce food, fiber, and shelter for society, but more importantly, they provide functioning ecological systems that capture and clean our water, produce and purify our air, and give wildlife a place to live. As goes the land, so goes our future in Texas.

Bubbling springs, crystalline creeks, and the blue-green Guadalupe River have drawn people to the hills of present-day Kendall County since prehistoric times. Where there is water there is life.

In the mid-1880s, Alfred Giles founded Hillingdon Ranch near Comfort, attracted by the presence of easily accessible water in Block and Flat Rock creeks and the opportunity to carve a living from the land. Since that time, Giles’s descendants have been doing what ranchers do. They have been transforming the sun’s energy stored in plants into beef, lamb, cabrito, wool, and mohair. They have been taking care of the soil and managing the grazing, so a wide variety of plants continue to thrive. By creating a mosaic of diverse native plants, the family has ensured that most of the original 13,000 acres remains home to deer, turkeys, birds, bees, and butterflies, as well as livestock. 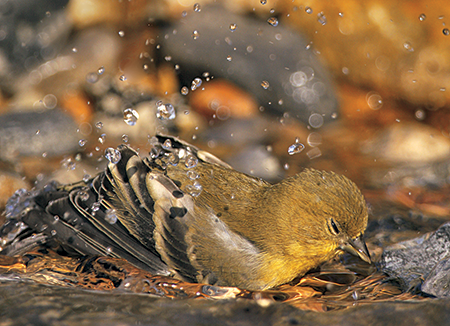 While it may not be obvious to the casual observer, the family’s land stewardship efforts have kept the water flowing. The vegetation that sustains the wildlife and the livestock is an integral part of the water cycle. The quilt-like mosaic of grass, forbs, shrubs, and trees catches the rain that falls, slowing it down so that it seeps into the underlying aquifers instead of rushing headlong down the steep rocky hillsides, eroding the precious topsoil and clogging nearby creeks and springs. The water that reaches both Block Creek and Flat Rock Creek, the largest of the ranch’s many creeks, streams, and springs, is clear and clean as the watercourses make their way to the Guadalupe River and eventually Matagorda Bay, winter home of the whooping crane. Downstream users turn on their taps completely unaware that the efforts of their upstream neighbors ensure that water flows forth when the spouts are opened.

While the family’s committed stewardship is impressive, it is not necessarily unique. It is a process that is being repeated by conscientious land stewards across our state and nation.

What makes the Gileses’ contribution extraordinary is that they have been doing this for six generations, keeping their original home place in agricultural and ecological production since 1885. It has not been easy. As generation after generation has passed its legacy to the next, holdings have gotten smaller and more family members share a stake in the ranch. Today, a couple of dozen family members own pieces, ranging in size from 10 acres to several hundred acres. To put this in clear perspective, almost every pasture in the ranch is owned by a different family member. The operation is not held together by incorporation papers, but by a deep-seated bond to this place that family members consider home, whether they actually live on the ranch or not.

As a child, Alfred Giles fell in love with the green hills and black cattle of Scotland, where he and his English-born parents, Thomas and Sophie Giles, vacationed. At the time, no one, least of all little Alfred, realized how this cherished memory would shape his life.

In 1875, Alfred came to Texas as a young adult after a bout of rheumatic fever, hoping the climate would help him regain his strength. At the time, Texas was a rugged but burgeoning frontier, crackling with the promise of its potential. As a gifted architect, the Englishman, who settled in San Antonio, was in high demand. He built public buildings, such as the courthouses in Kendall, Gillespie, and Wilson counties and the officers’ quarters at Fort Sam Houston, several churches, as well as many distinguished residences in San Antonio’s King William District and the mansion of Captain Charles Schreiner, founder of the YO Ranch, in Kerrville. His influence was felt throughout the Texas Hill Country, South and West Texas, and far south into Mexico, where he maintained a branch office in Monterrey.

Initially, the ranch was an investment and a getaway. Each time a new menace emerged, such as a rash of lawlessness or an outbreak of a deadly disease, the family would pack up and literally head for the hills to escape the danger. In fact, it was the threat of a cholera epidemic that convinced Alfred to make the ranch the family’s permanent home. 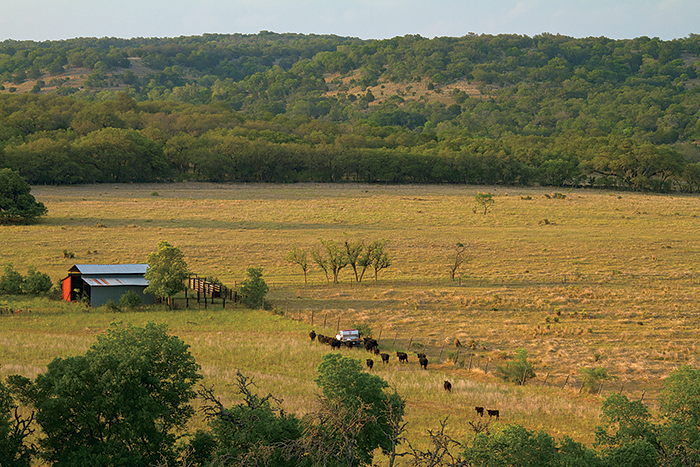 A cattle herd follows a feed truck to a hay barn.

Despite the demands of his career and her family duties, or perhaps because of them, both Alfred and his wife, Annie Laura, were in tune with the natural world. They chronicled their observations of nature and life on the ranch in a journal, allocating a great deal of space to rainfall, drought, and the status of springs and creeks, because of their impact on everyday life, and shared their love of their Hill Country home with their children. Annie Laura was also a writer and a teacher. Because of the remoteness of Hillingdon, she bore the responsibility for homeschooling the children, and it is likely that natural history was as big a part of the curriculum as it was of their lives.

The world has changed—and is changing. And yet generation after generation of Alfred Giles’s descendants have kept Hillingdon Ranch intact, standing strong against the forces that have divided other historic ranches. Knowing that Texas is losing agricultural land faster than any other state, even a casual observer has to ask, “What has prompted this family to hang on to the land, when so many others have turned loose?”

The answer is that the family is standing on common ground when it comes not only to the land, but also to shared experiences. Since the days of Alfred Giles, summer on Hillingdon Ranch has been the event that has planted each generation’s feet squarely on family ground.

While Robin Giles, grandson of Alfred Giles; his wife, Carol; their 28-year-old son, Grant; and Grant’s wife, Misty, shoulder the day-to-day duties of managing Hillingdon, the extended family bears the long-term responsibilities of keeping the ranch in production. This relationship between hands-on managers and family landowners has hung in carefully calibrated balance for five generations. It remains to be seen what will happen in the sixth.

For obvious reasons, the family is deeply interested in the ranch’s next chapter, but the concern should not be theirs alone. As goes the ranch, so goes the water. And where there is water there is life, inside the fence lines—and beyond.

While it is easy to imagine that rural Texans and urban Texans are separated by insurmountable barriers of concrete and experience, it is not true. We stand on common ground. As humans, we all need the same things: healthy food, durable clothing, protective shelter, clean water, and productive open spaces that are not only home to our essential natural resources and processes, but also provide beautiful, natural settings that restore our collective spirits.

As historical and recent droughts have proven, water is our most precious resource. Too often it is in short supply. But our open spaces, like Hillingdon Ranch, offer the promise of commonsense solutions. As former President Lyndon Baines Johnson, a native of the Texas Hill Country who grew up about 30 miles from Hillingdon Ranch, noted, “Saving the water and the soil must start where the first raindrop falls.”

While land stewards like the Gileses cannot make more rain, their efforts can make more out of what we have. Well-managed land is the greatest water supply enhancement tool on the planet. With adequate and appropriate vegetative cover, land is nature’s sponge. In Texas, open space covers almost 150 million acres. When the objective is making the most of every drop that falls from the sky, a sponge of this magnitude and the landowners who keep it functional are essential to our way of life, no matter where we live. Whether our roots are planted in the soil or our foundations are built on concrete, we must come to understand that as the land goes, so goes the water—and life as we know it. By building on this shared understanding, we can manage our natural resources so that our future is both bright and sustainable.

Excerpted and adapted from the book Hillingdon Ranch: Four Seasons, Six Generations. Published by Texas A&M University Press, © 2013, as part of the Conservation Leadership Series, sponsored by The Meadows Center for Water and the Environment, Texas State University. 800/826-8911

Lorie Woodward Cantu grew up on her family’s Central Texas ranch and now lives in San Angelo, where she is president of Woodward Communications. David K. Langford, great-grandson of Alfred Giles, lives on the Laurels Ranch section of the Hillingdon family land. He owns Western Photography Company and is a former executive vice president of the Texas Wildlife Association.